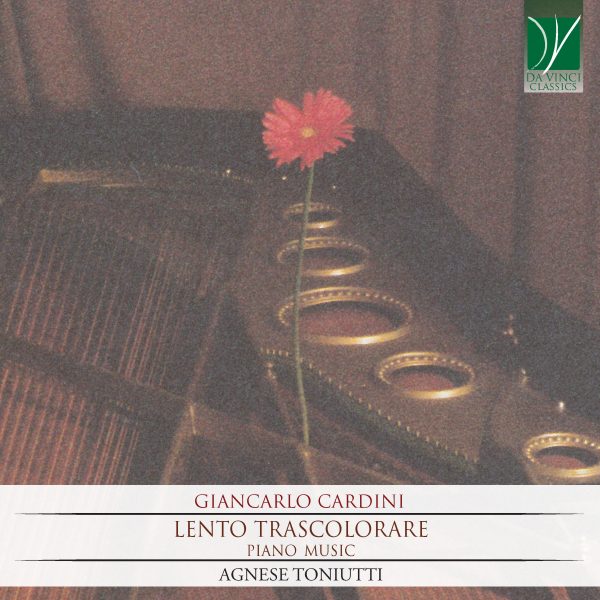 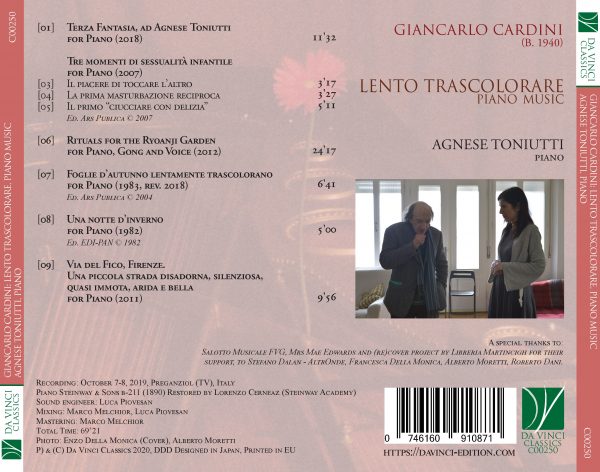 “One of the main contemporary Italian musicians”, “a lyrical constructivist”, “a thoughtful musician”, “a free thinker like no other”; Cardini “is a synonymous for openness”, being “a musician, a composer, a pianist, a performer and a poet”: such are the press clippings about him. Unaware of this all, I got acquainted with the music by Giancarlo Cardini in 2016, when I was requested to premiere his Tre momenti di sessualità infantile. At first, I was amused by the title, at least unusual, if not provocative; then, I was immediately enthralled by an enchanted aural world, with its delicately iridescent colours. In this music, space opened up, time was dilated, and the resonances traced the path. I wanted more of this music, and I began inserting in my repertoire one piece after another, up to the realization of two recitals entirely focusing on his works, which I first performed in the season of the Salotto Musicale del Friuli-Venezia Giulia. Getting to know Cardini and working with him mirrors the relationship with his music: on the one hand, there is an uncommonly sharp thought (which is not fearsome of those stances which are uncomfortable but mindful), and a benevolent curiosity for life, together with the tendency to include rather than to exclude. On the other hand, there are many silent gestures, expressing an intensely poetic and contemplative sensitivity, which is frequently joyful. While I was imagining the details of the recording, I had the luck of coming across an 1890 Steinway B, masterfully restored, which had a generous voice, overflowing with harmonics: this was the ideal fellow for giving the right width of resonance to this music.
Agnese Toniutti

Agnese Toniutti obtained her diploma with the highest score at the Conservatory of Venice with a dissertation on Giacinto Scelsi’s piano works; since then, she focused on the exploration of the contemporary and twentieth-century repertoire. In her activity as a concert pianist, she experiments with a particular way of communicating with the audience; she proposes themed solo recitals whereby the musical performance alternates with short audio excerpts and written testimonies, resulting from her research on the documents, in parallel with her artistic interpretation. The documents she selects are elaborated in a “direction of the hearing” which tightly relates to the pieces she performs. Among her projects of research-performance are the monographic “portraits” dedicated to composers she studied with particular attention in her artistic itinerary (i.e. Giacinto Scelsi, to whom she is highly devoted both as a performer and as a scholar, Giancarlo Cardini and John Cage), as well as her programmes dedicated to the international artistic movement Fluxus (with premieres of works by Philip Corner and Dick Higgins) along with a project about the female creativity from the Fifties to present-day (including a research project about Lucia Dlugoszewski’s “timbre piano”). She frequently aims at artistic cooperation which puts the contemporary repertoire in dialogue with other expressive forms (recitation, dancing, photography, visual arts and video art). She performed as a soloist and as a chamber music player in several international festivals in Italy, Europe and the United States.

Giancarlo Cardini. A pianist and composer, Cardini lives in Florence, where he first studied and later taught piano at the Conservatory “Cherubini”. As a composer, he wrote chamber, vocal, symphonic, mixed-media and stage works. His ray of action encompasses, along with experimentalism, some encroachments in the field of “light” music (original dance-music, and very numerous piano transcriptions of twentieth-century songs from Italy, Brazil, Cuba and America, including works by Modugno, Bindi, Paoli, Tenco, Porter, Berlin, Bernstein, Bacharach, Jobim). As a pianist, he performed throughout Europe, in America, Japan, India, Egypt, Nepal, performing a repertoire mostly focusing on contemporary music, including many premieres. He cooperated with Cage, Feldman, Chiari, Bussotti, Castali, Clementi, Giani-Luporini, Luca Lombardi, Grillo, Daniele Lombardi, Mosconi and Zosi. He has also recorded many CDs, with works by his own and by others, including Satie, Cage, Bussotti, Castaldi, Clementi etc.
Worth mentioning are then three books: Bolle di sapone (Florence: Centro Di), gathering some of his verbal scores and audio-visual compositions; a volume with attached CD (Bologna: Agenda) focusing on his output, with essays by Sylvano Bussotti, Marco Lenzi and Michele Porzio; and a book-length interview by Paolo Carradori (Massarosa: Del Bucchia) with articles by Sylvano Bussotti, Renzo Cresti and Mario Gamba.