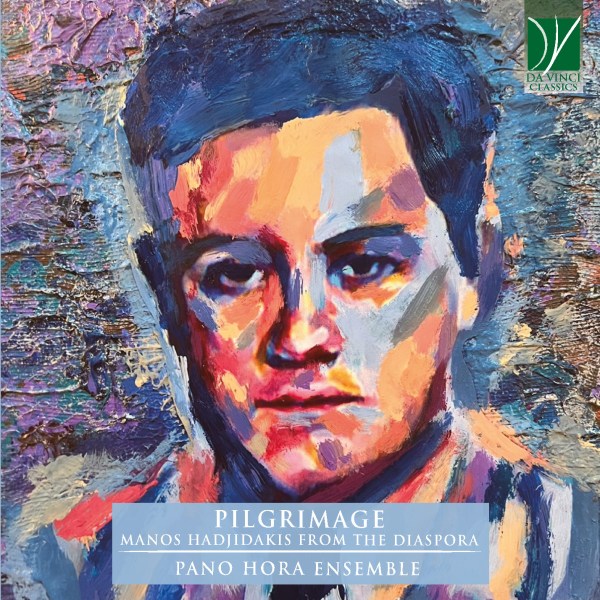 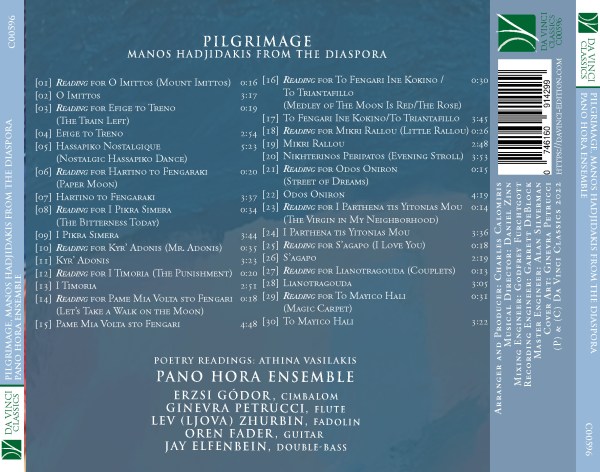 Pilgrimage: Manos Hadjidakis from the Diaspora

Ginevra Petrucci: Hailed by the press as “one of the most interesting talents of her generation”, Ginevra Petrucci has performed at Carnegie Hall (New York), Kennedy Center (Washington D.C.), Salle Cortot (Paris), Teatro La Fenice (Venice), Villa Medici (Rome), Ohji Hall (Tokyo), as well as throughout China, South America and the Middle East.
As a soloist, she has appeared in concert with I Pomeriggi Musicali, I Virtuosi Italiani and the Chamber Orchestra of New York, and has released the first recordings of Edouard Dupuy and Ferdinand Buchner’s Concertos. Her chamber music experience has brought her to appear alongside pianists Bruno Canino and Boris Berman, and to a long-standing collaboration with the Kodály Quartet, with whom she has released the highly acclaimed recording of the complete Flute Quintets by Friedrich Kuhlau. Her recording of Robert Muczynski’s Sonata has been praised as “oozing with lifeblood and zest … enthralling and rousing”. In 2017 she has rediscovered and recorded Wilhelm Kempff’s Quartet for flute, strings and piano and toured Italy with its premiere performances.
Ginevra devotes much of her artistic endeavors to contemporary music. At Yale University she has collaborated with George Crumb, Steve Reich, Betsy Jolas and Kaija Saariaho, performing the American premiere of Terrestre. She commissioned Jean-Michel Damase’s last composition, 15 Rubayat d’Omar Khayyam for voice, flute and harp, and she has appeared at the Venice Biennale Contemporary Music Festival with a commissioning project dedicated to Witold Lutosławski. In 2018 she has founded the Flauto d’Amore Project, a large-spanning commission endeavor aimed to the creation of a new music repertoire for the modern flauto d’amore.
She has curated the edition of over twenty musical editions, including Briccialdi Concertos for Ricordi/Hal Leonard and first editions of works by Mercadante, Jommelli, Morlacchi, Busoni and De Lorenzo. Her scholarly articles appear in the Flutist Quarterly, as well as in the leading flute magazines in Italy and France.
She has studied at Santa Cecilia Conservatory in her native Rome with her father, and then pursued her education at the École Normale in Paris. She holds a Master and Artist Diploma from Yale University and a Doctorate of Musical Arts at Stony Brook University.
She is Principal Flute at Chamber Orchestra of New York.

Jay Elfenbein
has held the position of principal bassist with Boston Early Music Festival Orchestra, Opera Lafayette, and the Washington Bach Consort, among others. He was viola da gamba soloist in both Bach Passions, for many performances, including the Kennedy Center, and played basse de violon with Tragicomedia, Portland Baroque Orchestra and Early Music New York. He holds a Master of Music degree in jazz composition and arranging, and has published works commissioned by Les Voix Humaines (Montréal); Elliot Z. Levine, baritone of Western Wind Vocal Ensemble (New York); Yukime Kambe Consort (Japan); Bass Instinct Sextet (Vienna). He has contributed to more than 40 recordings for Sony Classics, CBS and Virgin, among others. He has worked with Lou Rawls, Ella Fitzgerald, Paul McCartney, Pat Metheny, Paul Simon, Joe Zawinul, Dave Brubeck, Chris Potter, Jean-Phillipe Viret and Anthony Braxton. After 30 years in New York, Washington and Boston playing classical, Baroque and jazz on bass and viola da gamba, Jay spent several years as a gamba and bass soloist with Cirque du Soleil in Macau and France before returning to New York in 2014.

Lev (Ljova) Zhurbin
composes and arranges for the concert stage, contemporary dance & film, leads his own ensemble, Ljova and the Kontraband, and performs as a violist and fadolínist. He has authored more than 120 compositions for classical, jazz, and folk ensembles, as well as scores for numerous films. He has released ten albums on his label, Kapustnik Records, and his compositions have been recorded on Deutsche Grammophon, Sony Classical, Bridge Records, Naxos and In A Circle labels. He is an alumnus of the Sundance Institute’s Film Composers Lab. His music has been licensed by HBO, PBS, BBC, CNBC, and NHK networks, among others. Recent projects include commissions from the City of London Sinfonia, The Louisville Orchestra, Yo-Yo Ma and the Silk Road Ensemble, a string quartet for Brooklyn Rider, and a clarinet quintet for Art of Élan. He has appeared as violist on Saturday Night Live, The Late Show with David Letterman, and The Tonight Show with Jimmy Fallon. Ljova is the curator of “Out of Leftovers”, a family-friendly performance series at New York’s Symphony Space.

Oren Fader
has performed classical and electric guitar in Asia, Europe, and throughout the United States. Concerto performances include the Villa-Lobos Guitar Concerto with the Orpheus Chamber Orchestra, and Rodrigo’s Concierto de Aranjuez with the New Jersey and the Omaha Symphonies. He has performed hundreds of concerts with a wide range of classical and new music groups, including the Met Chamber Ensemble, Cygnus Ensemble, Bowers Fader Duo, New York Philharmonic, Talea Ensemble, ICE, Mark Morris Dance Group, Saint Paul Chamber Orchestra, and the Chamber Music Society of Lincoln Center. He has premiered over 250 solo and chamber works with guitar, and can be heard on over 50 commercial recordings and films. He received his undergraduate degree from SUNY Purchase and his Master of Music degree from Florida State University. Since 1994, Mr. Fader has been on the guitar and chamber music faculty of the Manhattan School of Music. He also directs the classical guitar programs at Montclair State University and SUNY Purchase.

Manos Hadjidakis
(b Xanthi, 23 Oct 1925; d Athens, 15 June 1994). Greek composer and administrator. Almost entirely self-taught as a composer, he attracted notoriety in February 1949 by drawing attention in a lecture to rebetiko (urban folksong), a genre previously scorned by serious Greek musicians. His series of lectures on American composers (Menotti, Copland and others) in Athens early in 1953 did much to expand the horizons of young Greek composers, who had been isolated by World War II and by postwar conditions. He was active in promoting new Greek music within Greece: in 1962 he financed the Manos Hadjidakis Competition at the Athens Technological Institute, which introduced works by Xenakis, Logothetis, Mamangakis, Antoniou, Ioannidis and others; in 1964 he founded and conducted the Piramatiki Orchistra Athinon (Athens Experimental Orchestra), which, although it gave only 20 concerts during its brief life (1964–7), was responsible for the premières of 15 Greek pieces. In 1967 Hadjidakis moved to New York, but he returned to Greece in 1972. In 1975 his international reputation prompted Karamanlis’s right-wing government to appoint him director of music programmes for Hellenic Radio and, a little later, director of its Third Programme (1975–82), as well as director general of the Athens State Orchestra (1976–82) and deputy director general of the National State Opera (1974–7). For seven years he was one of the most influential musical figures in Greece. Under his guidance the Third Programme underwent considerable (though not lasting) changes, while the short-lived Musical August festival in Iraklion, founded in 1979, became an important platform for young composers. Yet despite Karamanlis’s support, the intricate problems of music in Greece after years of stagnation and mismanagement proved insoluble for one of Hadjidakis’s ebullient temperament, and he withdrew when Papandreou came to power. He then became editor of the art periodical To tetarto (1982–3) and founded the record company Seirios (1985) and the Orchistra ton Chromaton (Orchestra of the Colours; 1989), whose sole conductor he remained as long as his health permitted.