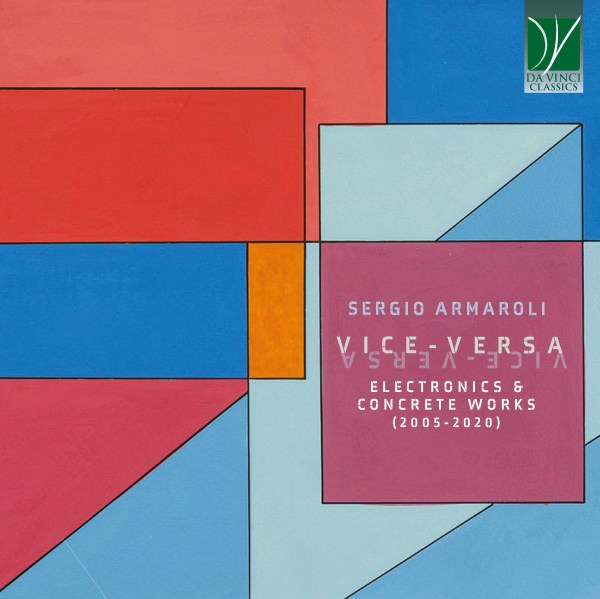 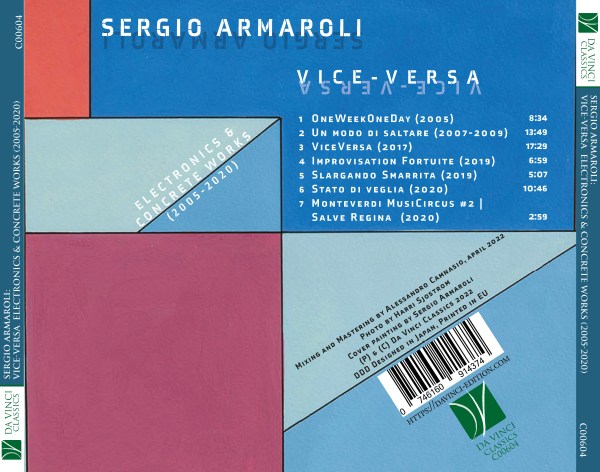 OneWeekOneDay (2005), for computer tape
“One being transforms into another. The collage is of no interest to me. All sounds are closely linked through the way they are performed and the way they are exhibited in time and space. The basic material is always the same… When I talk to you about alchemy, I mean the art of transforming one material into another ”.
Karlheinz Stockhausen

I. Oblique crossings Radio play for concrete and electronic music: a collage. In negative.

Electronic music allows you to tell within a very small space with a series of gestures and movements, to describe, creating a sound landscape. OneWeekOneDay is inspired by Buster Keaton and his cinematic genius. As in a Keatonian short film, time is dilated, while space is restricted to the eye of the room; it is the comic gesture that is always “in excess” and aimed at breaking the narrow limit of the frame to characterize the imaginary world of his “making cinema” (understood as composing, putting together with artisan knowledge). Cinema as a model of space-time development, as an imaginary reference of composing in synthetic and concrete sounds, where sounds are understood as things, real sound objects: images of reality. The list could be very long: the thunder, the airplane, a bee, ping pong, a pinball machine, some marching bands, a music box, a radio, the voices of astronauts … These (concrete) object-sounds combined with imaginary and synthetic sounds are composed in a non-linear time span (as in a Keatonian subject I might add!), Seeking, in sound and in its ability to refer to an “elsewhere”, a theatrical and spectacular dimension. The piece is divided into three parts (or “event”) each of which is intended as “a tribute to …”: the first to Karlheinz Stockhausen, the second to Charles Ives and the third to John Cage. Each part or event is characterized by a very precise setting and by an equally precise spatial-temporal location: the first is an exterior-night (near a large urban center); the second is an imaginary metropolitan center; while the third is an interior of a concert hall: other environmental suggestions are possible and equally plausible. Thus from a maximum accumulation we tend towards a rarefaction within a mechanism of “slow reconstruction” by subtraction / addition of materials combined according to a negative / positive mirror logic; it is not a collage, except as a “negative collage”.

Un modo di saltare (2007), for computer tape
“Primitive societies are oral not because they lack graphism, but on the contrary because the graphism in them is independent of the voice and marks on the bodies signs that respond to the voice, which react to the voice but which are autonomous and do not align with it; on the other hand, the barbarian civilizations are written, not because they have lost their voice, but because the graphic system has lost its independence and its own dimensions, it has aligned itself with the voice, it has subordinated itself to the voice, except to abstract an abstract flow from it deterritorialized which it holds and makes resonate in the linear code of writing ”.
Gilles Deleuze/ Felix Guattari

MusiCircus for tape.
A stratification of voices (audition) for a possible vocalic graphism of the sound body as a ritualized gesture; superimposition of voices towards a deterictolisation of the meaning of the sound sign / signal in the relationship: voice-hearing; graphism-color; eye-pain.
The piece has a beginning “from the bottom”, with frontal bass / s voice and as if it came from a cavernous environment (harmonic drone and granulation of the sound space). A1: Complaint: towards the loss of a center. B: Rondò, where the sound acquires a circular direction in space by overlapping circles. Thus “the voice emerges”. The sound clings to a point of apparent stability and then… falls. C: silence-sigh-silence. Almost inaudible. Short echo: of a very large and empty place. The tail is a dirge whispered in the ear. Nearly.

Vice-Versa (2017)
d’aprés les sons de Luc Ferrari:
memory of a sound archive,
for computer tape and concrete sounds
Dedicated to Brunhild Meyer-Ferrari
Inspired by Luc Ferrari’s text “Les etapes de la vision” the piece is divided into four parts: I. L’Objet (the voice); II. Le Trajet (open-verso); III. Internal L’Oeil (pulse); IV. Le Retour. Each part is characterized by a defined sound context where some precise sound objects will determine recurring and recognizable leitmotifs. Also in this case a repeated circular shape will lead to a fall and shattering of the material through some elements: the shadow of a choir, the voice of Luc Ferrari, water … The title, Vice-Versa, suggests a circularity of the material organic-artificial sound aimed at its dissolution and its rebirth: from the fall to the rebirth.

Improvisation Fortuite I (2019)
for computer tape (and prepared vibraphone)
Dedicated to Luc Ferrari
Starting from the vocal fragment of Luc Ferrari repeated within an improvisation for “prepared vibraphone”, the piece develops, with the accumulation of sound material. “Improvisation” to be understood in a broad sense, open to all possible combinations. The overall shape of the piece respects that of the golden section where, towards the Coda, we find the voice with the cadenza for vibraphone as an imaginary container (pour une archive sonore) of all the sound material of the piece in a process of entropic accumulation.

Slargando smarrita (2019), for computer tape.
Posthumous tribute: Demetrio Stratos and Nanni Balestrini, flaring lost “inside and singing the voice” where the language dissolves into Voice. In a crescendo, with a self-quotation from “A way of jumping” the plot of Demetrius’s voice, shattered, thrown, exploded for an ideal of the City of Sound. In the piece the breaths before the jump are isolated, intertwined in the vocal shadow of Antonin Artaud. Spreading lost (breathing before the jump): the voice. Desperate echo scream.

Stato di veglia (2020), for computer tape
Dedicated to Luigi Russolo in memoriam
This piece was composed for the Prix Luigi Russolo. Waking state:… and the city rises. An awakening of the city as a tribute to Luigi Russolo. Sound archetypes of sounds that have their own identity where “beyond the sound matter” there is the condition of awakening. A constant flow of evolving sound matter, combined and composed in aggregates through the combination of internal tensions and contrasts between sound and noise. Figures are born from conflict, from the texture of sound to awakening. A subjective listening of a precise moment of the day: dawn where the sounds have the same consistency as dreams. Mental noise: skizo (Deleuze).

Monteverdi MusiCircus #2
Salve Regina (2020)
for computer tape
From a fragment of Claudio Monteverdi’s Salve Regina comes this piece in the form of a MusiCircus for quadraphonic diffusion, like an extended, dilated song: a sweet sleep in the silence of a nocturnal landscape for a listening that seeks form.