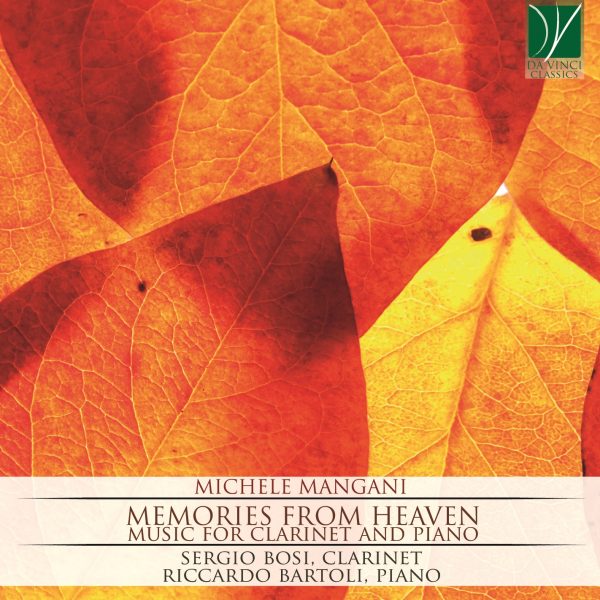 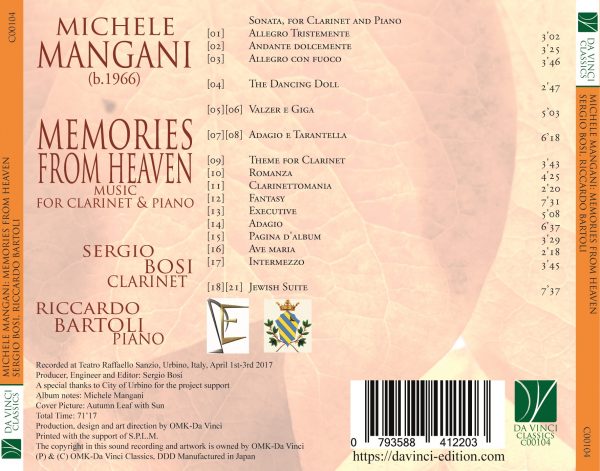 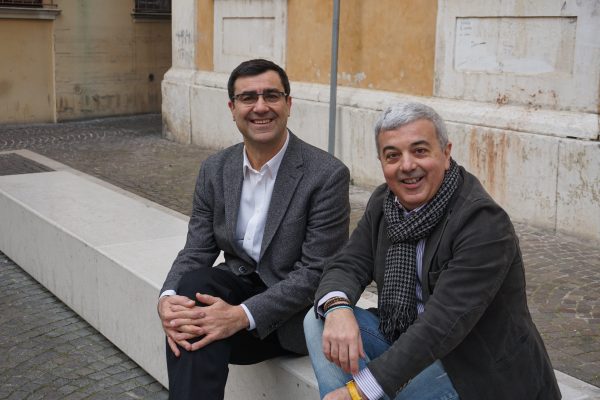 From album notes by Michele Mangani:

I am particularly gratified to introduce the first monograph dedicated to my chamber music for clarinet and piano.
The project was born in close collaboration with friends and colleagues Sergio Bosi and Riccardo Bartoli, a circumstance that gave the chance to fix in a very faithful way the compositional spirit of the whole program here presented.
Every technical and musical aspect has therefore been thought of as a group of pieces aimed at a unique musical experience.
The project covers a wide period of time and includes several compositional styles, ranging from the academic of the Sonata to the jazzy verve of Clarinettomania, passing through the melodic notes of songs such as Album page, Theme for clarinet and Romanza.
I wish to stress that most of the compositions are in the first absolute recording, a courageous choice of the publisher to whom I express a special thanks. (Translation by Fabiana Binarelli)

Michele Mangani, born in Urbino, was certified at “Gioacchino Rossini” Conservatory in Pesaro in Clarinet, in band instrumentation, composition, conductor and at “G.B. Martini” conservatory in Bologna in choral music and in choir director.
In 1996 won the National Contest for conductor of the Italian Army National Band. He received a lot of National and International prizes and he is one of the most appreciated Italian composers.
His compositions had been played and hacked around the world by different interpreters, orchestras and bands as: Wenzel Fuchs, Philharmoniker Berliner Orchestra main clarinet, Corrado Giuffredi, soloist clarinet of the Italian Symphonic Orchestra from Switzerland, Patrick De Ritis, 1° soloist bassoon of the Symphonic Orchestra from Wien, Ricardo Morales, main clarinet of the Philadelphia Orchestra, the Italian National Army Band, the Italian RN Music Band, the Financial Guard Military Band, the Symphonic of the Bulgarian Radio, the Philharmonic Orchestra from Bruxelles, The National Juvenile Orchestra from Spain, the Sinfonietta Orchestra from Losanna, the wind Octet of the Scala theatre.
His music productions are more than 500 today, published by Eufonia Music Edition and his Opera are often inserted as obliged songs in execution contests, where he is often invited as jury commissioner or president. He is the wind Orchestra of Marche conductor and Professor of collection music for wind instruments at G. Rossini Conservatory in Pesaro. Since March 2017 he has been Director of the Musical Chapel Academy of SS. Sacramento in Urbino.

Riccardo Bartoli (Piano): Graduated him with the maximum one of the votes and the praise at the Conservatory of music "G. Rossini”, he has continued the studies with prestigious piano teachers such as Aldo Ciccolini and Sergio Fiorentino contemporarily achieving different prizes in national and international Contests as well as the "Diplôme Supérieur of Exécution" (with mention to the unanimity) at the Normal Ecole "A. Cortot" of Paris, the Diploma of Worth at the Academy Chigiana in Siena and the Degree in Disciplines of the Music at the University of the Studies in Bologna. s soloist and of pianist of Chamber music, Riccardo Bartoli has developed a notable concertistic activity in Italy, France, Germany, Belgium, Sweden, Norway, U.S.A. and China, he has effected recordings for the RAI and has engraved CD for Naxos, Arcam and Bongiovanni getting important critical recognitions from specialized magazines to international level what Fanfares (USA), Diapason (France), Plain Time (Italy) and not last CD Classica (Italy), where the monograph on Carl Reinecke has been winning as "CD of the Month" with artistic judgment "Exceptional". Riccardo Bartoli places side by side that didactics to the artistic activity at the Conservatory of music "G. Rossini" of Pesaro where he owns a Practice Piano professorship.

Sergio Bosi (Clarinet): Principal Solo Clarinet of the FORM - Orchestra Filarmonica Marchigiana and Clarinet teacher at the Gioachino Rossini Conservatory in Pesaro, Sergio Bosi started his musical studies very young, graduating at the age of 16 and winning numerous international solo competitions and chamber music.
As acclaimed specialist on Italian music he has recorded numerous CDs as principal artist for Naxos, Bongiovanni, Arcam-Cambridge and Mondomusica EMI, he is regularly invited to world congresses and holds masterclasses at foreign institutions including the Real Conservatorio Superior de Madrid, the Zhejiang Conservatory of music and the Musical Universities of Wien, Ghent and Castellon.
In editorial field, he supervise the Rare Italian Clarinet Music series for Eufonia publisher, making numerous revisions of important works, including the critical edition of G. Rossini's Variazioni in Do manuscript and the Aurelio Magnani’s wole production for clarinet and piano.
Sergio Bosi is Buffet-Crampon and Vandoren Paris Artist.