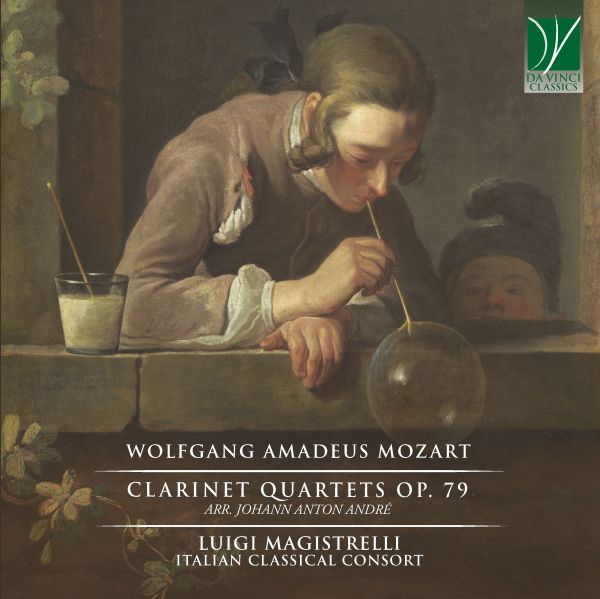 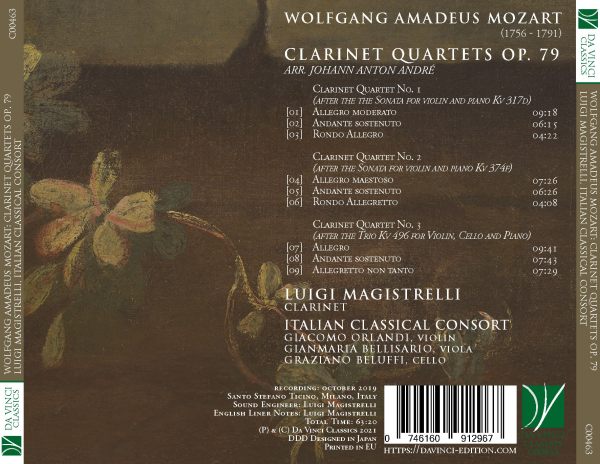 In the chamber music field the repertoire of quartets for clarinet and string trio is quite rich, especially considering the classical and late classical periods. We can cite composers such as G.F. Fuchs, J.B. Wanhal, F. Tausch J.N. Hummel, W. Pichl, F. Hoffmeister, C. Cartellieri, F. Krommer, B.Crusell and some others, who thought about this instrumental combination. It is without doubts a larger number of pieces than the quintets involving clarinet and string quartets (Backhofen, Neukomm, Mozart, Brahms, Fuchs, Marteau, Kreul). However, only a few of these above-mentioned quartets can reach a real high standard. The three quartets here recorded are not original for this ensemble but they can be considered real masterpieces, being music conceived by Mozart for violin and piano or violin, cello and piano and then re-arranged in a such masterly way. We are still not totally sure if the arranger was Mozart himself or Johann Anton Andrè. Johann Andrè (1741 /1799), father of Johann Anton, was a German musician, composer and music publisher. He was a quite enterprising person when he founded, in 1774, one of the first music publishing houses to be independent of a bookshop, in Offenbach am Main. In 1777 André was appointed musical director at the German theatre in Berlin, the Deutsches Theater, but continuing his activity as a publisher. He was also a prolific composer, producing 30 operas, ballads and songs. His son, Johann Anton André (1775–1842), followed his footsteps into composing and music theory. After taking over the publishing house from his father in 1799, Johann Anton André purchased the bulk of Mozart’s manuscripts and papers from Mozart’s widow Constanze, who was in need of money and thus began decades of work towards assembling a definitive catalogue of Mozart’s work. Costanze also entrusted him with writing concluding measures to the overture to Don Giovanni, so that it could be performed in concert. He developed the music publishing business and introduced lithography for printing of notes. Musikhaus André and the Musikverlag Johann André, with their wide-ranging musical archive, still exist today in the centre of Offenbach. In 1799 André published a set of three Mozart arrangements for clarinet, violin, viola and cello, two of them after some of his most celebrated violin sonatas (K. 378 and 380) and the third after Mozart’s Piano Trio, K. 498. This publication had on the frontpage the name of Mozart as a composer, clearly for commercial reasons, as often could happen in those times (also many works of Haydn were published under different names of minor composers such as Hoffmeister and others). The quality of these arrangements is so high that one could think about Mozart as a composer, but we don’t have any clear evidence of this so I would state that the high quality of these pieces could facilitate also the good quality of the arrangements done by an expert arranger like Andrè. The late german clarinetist Dieter Kloecker, who recorded them for the first time, was quite convinced that Mozart was the arranger of these quartets but unfortunately he didn’t show any evidences. In this recording has been used the precious Andrè early edition, located at the library of the Milan Conservatory, bearing the opus number 79. I noticed that it is so well written and rich of typical signs of articulations of the late classical time. Apart from a few places where repeated staccato notes could not be possible on the clarinet, all the others many signs are apropriate and the writing is quite idiomatic for clarinet, requiring a deep knowledge of that instrument. These arrangements were clearly intended for a virtuoso of the instrument, being quite demanding on the technical and musical point of view, also thinking about the five keyed clarinet used at those times. Perhaps Andrè had in mind the Viennese court musician A. Stadler, dedicatee of the great clarinet masterpieces of Mozart: Trio K 498, Quintet K 452 for piano and winds, Quintet K 581 for clarinet and strings and the sublime Clarinet Concerto K 622 plus a few unfinished fragments. Andrè published other quartets for clarinet and string trio of other composers and made other good arrangements and wind compositions, so we can think that he could have been fully up to the task of making the arrangements of the three Mozart compositions. The harmonic and textural foundation originally found in Mozart’s impressive piano part shifts in André’s arrangement to the string trio where its warm timbre and blended texture works most effectively. The art of arrangement was largely practised in the classical period also by the great masters. Mozart for example arranged his wind C minor Serenade K 388 for string quintet and Beethoven his Septet op 11 for clarinet, cello and piano (there are many other arrangements of the septet by other minor composers) to cite only a very few examples. The three quartets of this Cd are real gems both in their original version and then re-arranged with more instruments with the leading clarinet part. The clarinet is often used together the violin of the string trio for the many melodical and virtuoso lines of these three delightful compositions. The Quartet n 3 requires the C clarinet (used in this recording) in order to be more faithful to the original key of the piece and to give more brilliancy and freshness to the piece.

The Italian Classical Consort has members coming from different countries and important orchestras and Ensembles of Milano and of other cities in Italy. They also perform as solo players and some of them are professors in different Conservatories in Italy. The Ensemble, mostly devoted to the classical repertoire and performance practise,has already recorded some cds for Bayer Records, Gallo, Centaur Records and Brilliant.