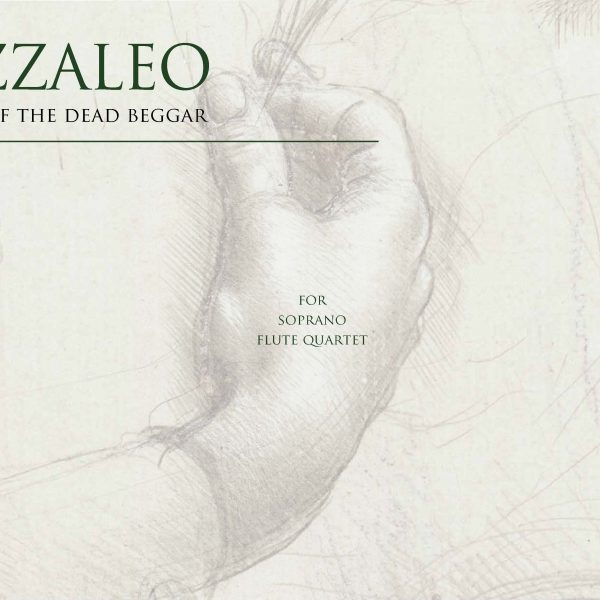 Pizzaleo, Luigi: Song of the dead beggar, for soprano and Flute quartet

Luigi Pizzaleo was born in Como (Italy) in 1971. After accomplishing piano studies in 1991, he studied compostion with Edgar Alandia and Alessandro Solbiati, then electronic music and composition with Michelangelo Lupone. At the beginning of Ninties he held many concerts as a soloist and in duos, specially with celloists, playing Beethoven, Brahms, Fauré, Debussy, Boccherini. His most recent activities as a composer are focused on new interfaces and intermedial works, but with a plenty acousmatic and instrumental production as well. His main interest at the moment is the development of tools for composition training based on the languages of new music, in collaboration with the group NUME-Nuova Musica per l’Educazione which he founded with other musicians and engineers in 2011. Among the most noticeble results of his research there are the Glass-harp, an instrument for electronic real-time improvisation, the Metis Inerface (a TUI with a collection of application for musical education oriented to new musical languages) and OSQ, an Open Sound Control software interface/controller and recorder. After graduating in Literature, he edited the volumes dedicated to Thirteenth and Fourteenth Century Italian Prose, Treatises of Sixteenth Century and Francesco Petrarca published by Istituto Poligrafico-Zecca dello Stato. He is an Italian and History teacher in the high school. He taught Electroacoustic Composition at the Conservatory of L’Aquila and Software, Tools and Programming Languages for Multimedia at the Conservatory of Latina. He recently got a PHD in History of Electronic Music with a dissertation on electronic music in Rome in Sixties. He recently published a study on MEV-Musica Elettronica Viva, with the publisher LIM-Libreria Italiana di Musicologia. At the moment he holds a class of History of Electronic Music at the Conservatory “Santa Cecilia” in Rome.