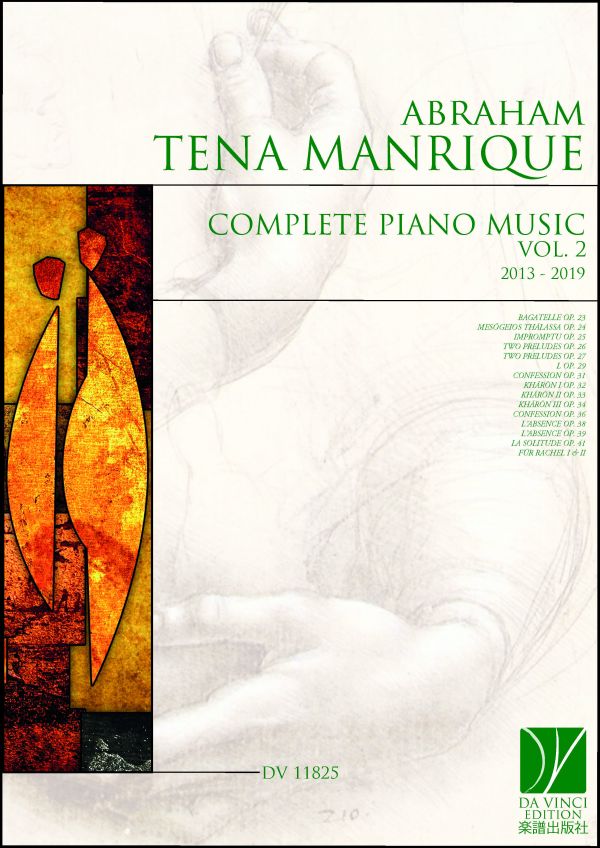 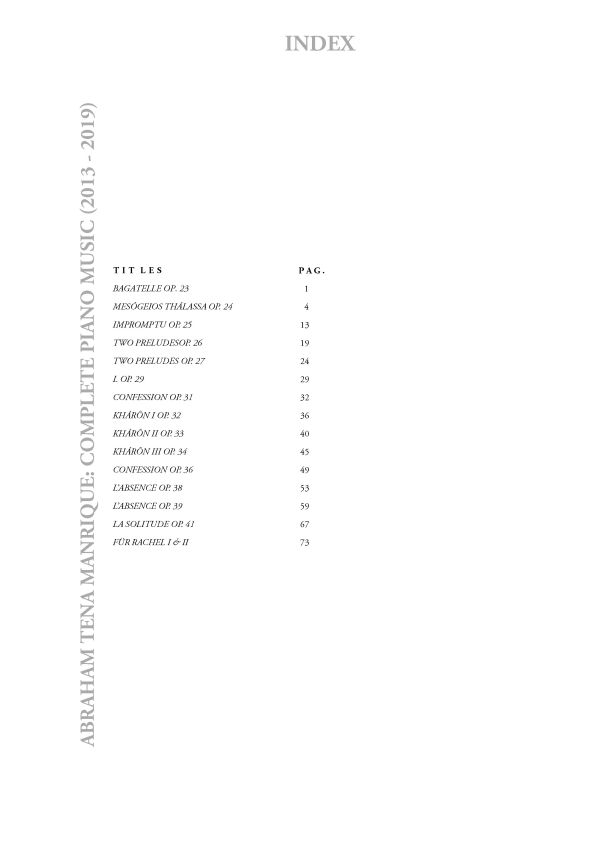 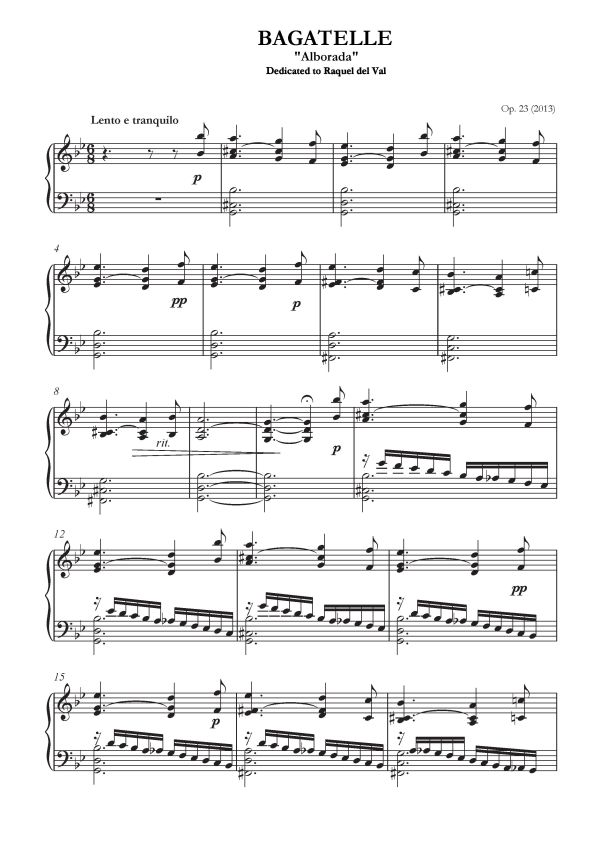 Manrique Abraham Tena: at present, in May 2017, Abraham Tena Manrique is writing the Cantata ‘The Seven Words of Christ on the Cross’, on behalf of Sergio Espejo, OCNE pianist, to be presented at one of the Satellite Concerts organized annually by the OCNE in the National Auditorium of Madrid.

In 2016, Editorial Boileau publishes its Octet Séneca Op. 31, written on a commission of Sergio Espejo, pianist of the National Orchestra and Choir of Spain (OCNE) and premiered on March 1 at the Auditorio Nacional de Madrid in charge of the Soloists of the OCNE previous recording in Studio 206, musical program of RNE.

A year before, in the year 2015, Editorial Boileau publishes its String Quartet ‘Don Quijote’ Op. 22a and the Trio for piano violin and cello ‘Don Quijote’ Op. 22b. Work that in the hands of some of the soloists of the OBC expects its premiere in brief dates.

Not to forget the concert facet of Tena Manrique, which will lead him to act, among other places, in the third edition of the Javea International Festival (Alicante). In particular, in the Closing Concert that takes place on July 9, 2017, invited by Nati Ballarín, director and founder of this prestigious festival interested in piano compositions by Abraham Tena Manrique.

Kharon, one of the published works that play the pianist, has been selected by the Catalan Association of Composers (ACC) and the Federation of Iberian Associations of Composers (FAIC), of which Tena is a member, for the next edition of the Season Music from now. Concerts sponsored by the Department of Culture of the Generalitat de Catalunya, Association of Artists, performers (AIE), Institut of Culture of the Barcelona City Council, SGAE Foundation and also have the collaboration, among others, with Catalunya Radio, Classical Radio, Museum of Contemporary Art of Barcelona and ESMUC (Higher School of Music of Catalonia)

The Royal Artistic Circle of Barcelona is the emblematic place chosen for the presentation of the eighteen piano works published by Da Vinci Edition in 2017, since its privileged location in the Palacio Pignatelli, in the heart of the city, together with the beauty of its concert hall and the prestige of the entity – one of the main bastions where Catalan modernism developed – make this institution founded in 1881 the ideal place for the first concert of the musician of this season.

With this piano recital, Abraham Tena Manrique begins his tour of concerts this season, with the intention of announcing his latest works to the public in Barcelona, after premiered eight of these works, at the III International Festival of Classical Music in Jávea (Alicante) which was held last July, where he was invited by Nati Balalrín, director and founder of this prestigious festival, interested in the concerts’ piano compositions, to perform the Closing Concert of the Festival.

To these recitals will soon be added their next concert, on Friday, November 24 at the Pere Pruna Civic Center in Barcelona, in its VI Cycle of Catalan Composers, and in other prestigious halls, inside and outside of the City of Barcelona, on dates that are yet to be determined and that can be consulted on the website of Abraham Tena Manrique. The compositions interpreted in his concerts of the present season, and recently published, will be incorporated soon to the new disc of the composer, that will be recorded this October, 2017, in the Auditorium Pau Casals of El Vendrell and that will count on the collaboration of the Japanese publishing house.

Since 2012 many musicians have performed and performed some of their works for piano, piano for four hands and for piano and clarinet, and other compositions for other chamber ensembles.

Kiev Portella, a founding member of the Fundació Mompou and excellent pianist, regularly performs several of his works in Barcelona, Tarragona or Menorca, to name a few cities.

Also, George Sand Piano Duo often premieres and interprets two of his compositions for piano to four hands, one of them written and dedicated to this group of camera, the Garden of the Hesperides Op. 37, in theaters of Madrid, Lugo, Palma de Mallorca and Merida.

Raquel del Val premieres in London in February 2017, the Bagatelle Op. 23 ‘Alborada’, Jenna Sung does the same with the 2 Op. 26 Preludes in Birmingham, Patricia García Gil premieres the seven fantasies ‘The Pilgrim Path Op. 20 ‘In Huesca, Anthi and Kostaq Vrame interpret the Fantasie for four-handed piano Op. 1 in Albania and Luis Becerra premiered Khárôn I Op. 32 and interprets it, among other theaters, in the Rodrigo Hall at Palau of Música in Valencia, and many more artists, all of them of recognized prestige.

December 14 (2017), the great Russian pianist Feodor Veselov plays Khárôn I Op. 32 by Abraham Tena Manrique into the prestigious series of concerts organized by the Association of Composers in Catalonia (Spain). Concert in which Veselov plays works by, among others, Benet Casablancas, director of High Conservatory of Liceo, Barcelona.