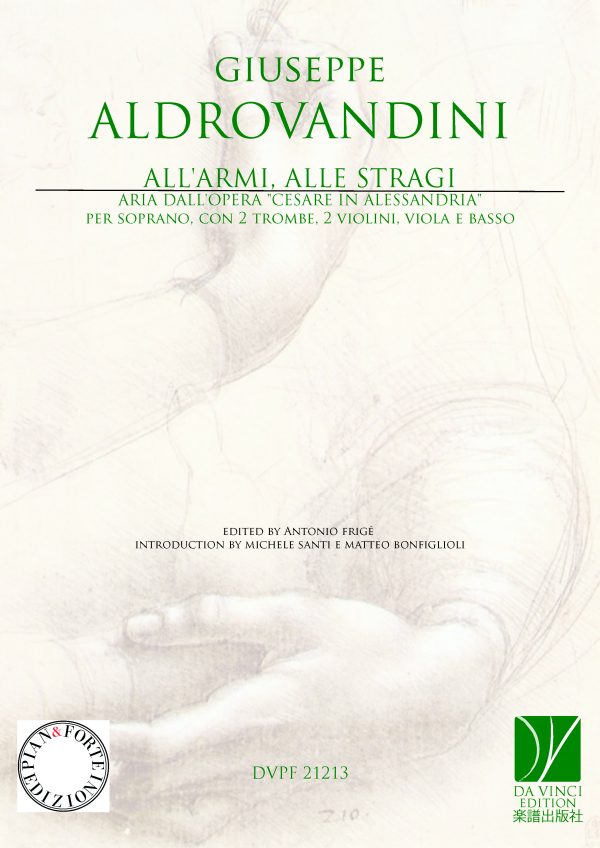 Giuseppe Aldrovandini (b Bologna, 8 June 1671; d Bologna, 9 Feb 1707). Italian composer. He studied composition and counterpoint with Perti, probably while the latter was maestro di cappella of S Pietro, Bologna. In 1695, after at least two of his oratorios had been performed in the city's churches, he became a member of the Accademia Filarmonica, and in 1701 was elected its principe. His name appears in librettos from 1702 as honorary composer to the Duke of Mantua and maestro di cappella of the Accademia dello Spirito Santo, Ferrara. Contemporary accounts indicate that he was a man of intemperate habits, which perhaps accounted for his lack of professional preferment and for his habitual poverty despite the recognition of his talent. He drowned in the canal port in Bologna as he was preparing to leave for Venice.

Aldrovandini was highly valued as a teacher of singing in Florence, and Prince Ferdinand sent his virtuosi to him for further training. As a composer he belonged stylistically to the late 17th-century Bolognese school of vocal and instrumental composers, though he possessed a degree of original brilliance that has not yet been fully assessed. His operas were widely performed not only in north Italy but in Naples as well. Three of his first four operas are important in the history of opera buffa, since they point to an early regional development of the genre independent of the Neapolitan school. Gl'inganni amorosi scoperti in villa, in Bolognese dialect except for the leading romantic roles, was performed several times up to 1759, although the first production was suspended by church authorities until some doubles entendres had been excised from the text. Dramaturgically the work is more sophisticated than its earliest Neapolitan dialect counterparts, with more clearly planned spacing between recitative passages and set numbers. As in the serious operas of the time, the first two acts end with arias rather than ensembles, although duets and trios appear frequently within acts. In form the arias appear to alternate freely between da capo structures and shorter songs. The music of this work, as well as that of Aldrovandini’s other dialect comedy, Amor torna in s'al so’, and of Dafni, an elegant pastoral comedy, has disappeared, but its style can perhaps be inferred from the comic episodes and intermezzos of the surviving Cesare in Alessandria (Naples, 1699). The failure of these comic operas to inspire successors in Bologna until G.M. Buini's time was probably due less to lack of public interest (Goldoni commented on the Bolognese appetite for comedy) than to the severe view of comedy taken by the archiepiscopacy. The high point of his short career is probably represented by works to Venetian librettos by Francesco Silvani (La Fortezza al cimento) and Apostolo Zeno (Pirro).

A number of Aldrovandini's serious operas were successful enough to be revived outside their cities of origin. He wrote their arias – almost without exception in da capo form – according to the motto principle; the second sections of da capo arias often use the same formal device. Although the serious operas are not formally innovatory their music is of impressive quality. Harmonic schemes are by no means merely stereotyped but are dictated by the expressive turns of the text; vocal melismas are included not just for display but are reserved for emotionally heightened words. In addition Aldrovandini was imaginative in his use of the orchestra. At a time when the continuo provided the standard accompanimental texture to arias he sometimes varied it by specifying ‘violone solo’; elsewhere he scored more fully, employing wind and brass as well as strings, not only as accompaniment but also in concertato textures with the voice parts.