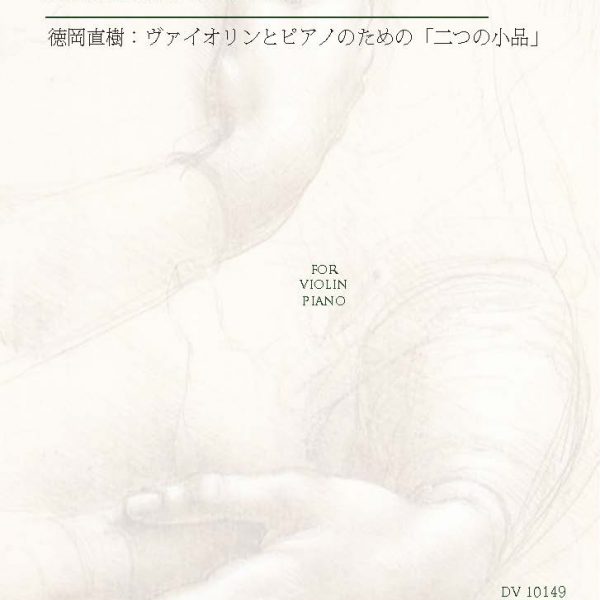 Tokuoka, Naoki: Prelude and Aria, for Violin and Piano

Naoki Tokuoka was born in Japan in 1970. He studied at Kunitachi College of Music and major studies were: percussion, composition, and piano. His Master degree was completed in 1996. In 1997, Naoki went abroad to study in Paris in conducting class with Mme. Francine Aubin and Mr. Andre Jouve in Conservatoire National de Region de Rueil-Malmaison.

In 1999 and 2001, Naoki was a candidate in the 46th and 47th Besancon International Conducting Competition and reached the semi-final, and was noticed and encouraged by Maestros Klaus Peter-Flor and Erich Grunberg, the two judges from the competition. In 2000 Naoki won the 1st prize for conducting in Conservatoire National de Region de Rueil-Malmaison.

In 2001 Naoki moved to Taiwan and became the musical director of the Chi-Mei Symphony Orchestra in Tainan. A young conductor with keen musical instinct, abundant experience, precision and fluent interpretations, as well as versatile repertoire (from Romantic to Modern), Naoki has very much sought after. He was recently engaged with the National Taiwan Symphony Orchestra and the Kao-hsiung City Philharmonic as their guest conductor.

In 2004, in order to honor his dedication to conducting and music making in the city of Tainan, Naoki was presented the title of the Honorable Citizen of Tainan City, Taiwan.

In May of 2005, Chi-Mei Symphony Orchestra was broadcasted on the Public Television of Taiwan and won the best classical musical program honor. Since then the Chi-Mei Symphony Orchestra has been considered one of the best orchestras in southern Taiwan. Naoki is not only an inspiring young conductor but also a very sophisticated composer. His fresh interpretation, energetic music performances, and delightful stage presence have made him an important player in the classical scenes in Taiwan.

In September 2005, Naoki participated in The International Sibelius Conductors’ Competition in Finland. In the absence of first and second winners in the competition final, Naoki was most welcomed and praised by many judges (including Jukka-Pekka Saraste, Neeme Jarvi, etc.) as well as the audience. Many encouraged him then and see him as a rising star with a brilliant future. During that time, Neeme Jarvi and his wife also invited and welcomed Naoki Tokuoka to attend the 2006 courses at the David Oistrakh Festival in Parnu, Estonia.