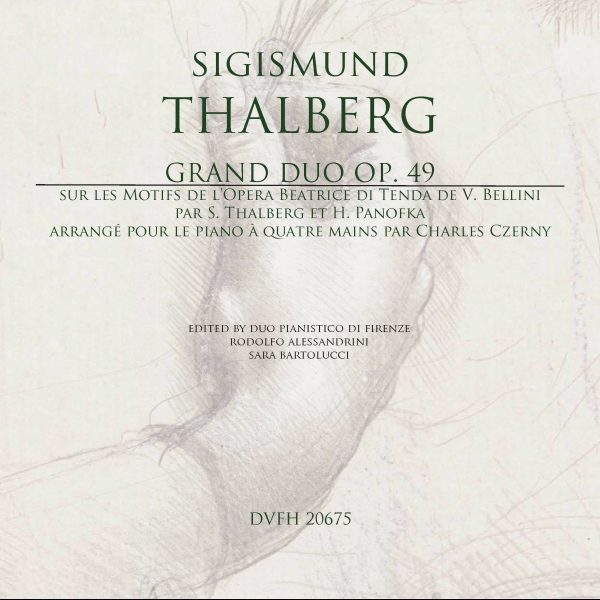 Sigismond Thalberg (b Pâquis, nr Geneva, 8 Jan 1812; d Posillipo, nr Naples, 27 April 1871). German or Austrian pianist and composer. He was said to be the illegitimate son of Count Moritz Dietrichstein and the Baroness von Wetzlar, but his birth certificate states that his parents were Joseph Thalberg and Fortunée Stein, both of Frankfurt. Although the certificate describes them as ‘mariés’, the wording rather suggests that each was married to someone else. It seems possible that Dietrichstein induced Joseph Thalberg to assume paternity and that the mother was a baroness in disguise; but the circumstances remain mysterious.

At the age of ten Thalberg was sent to Vienna to prepare for a career in the diplomatic service, but he studied music at the same time, receiving a rudimentary training from Mittag, the first bassoonist at the Court Opera, and then studying theory with Simon Sechter and the piano with Hummel. From the age of 14 he appeared with great success as a salon pianist, and two years later his first works were published. His international career began in 1830 when he toured in England and Germany and later in other European countries. He continued his studies with J.P. Pixis and Kalkbrenner in Paris and Moscheles in London. In 1836 he won considerable success and renown in Paris, and this was further increased the following year when Liszt, returning from Switzerland to challenge Thalberg’s position as the leading virtuoso in Paris, wrote an article in the Revue et gazette musicale harshly criticizing his compositions. This article was the start of an animated controversy between Liszt and Fétis, who considered Thalberg the greatest living pianist and defended his compositions in the Revue et gazette musicale; Berlioz joined the controversy on the side of Liszt, who pressed his claim in some very forthright articles and gave numerous concerts. The rivalry came to an end with a concert the two pianists gave jointly for the Princess de Belgiojoso; this symbolic reconciliation was sealed by their agreeing to cooperate with other famous virtuosos in composing one variation each for Hexaméron, as a tribute to the princess (the other composers were Pixis, Herz, Czerny and Chopin). From that time Thalberg enjoyed enormous popularity throughout Europe. In 1855 he travelled as far as Brazil and Havana, and he then lived for several years in the USA, where he gave successful concerts, taught and organized opera productions. He married the daughter of the opera singer Luigi Lablache in 1844, and in 1858 he bought a villa in Posillipo, near Naples. He continued to tour during the next five years, though with less frequency, and then retired to Posillipo, where he spent his last years as a vintner.

Together with Liszt, Thalberg must be ranked as the greatest virtuoso pianist of the mid-19th century, a view endorsed by Mendelssohn in a letter of 30 March 1840. In keeping with the virtuoso tradition he played almost exclusively music of his own composition, which consisted mainly of fantasias on favourite opera arias by Rossini, Meyerbeer, Donizetti, Verdi and sometimes Weber and Mozart. His Fantasia op.33, on themes from Rossini’s Moïse, brought him wide recognition, and the dazzling technique it demanded aroused admiration. Later it was realized that Thalberg’s basic compositional method was relatively simple, consisting of placing the melody in the centre of the keyboard first in one hand, then in the other (the thumbs and the sustaining pedal used in particular to prolong the sound), and ornamenting it with florid counterpoint and chords above and below. Nevertheless, an image of Thalberg as a stupendous virtuoso composer had been created, and the cartoonist Dantan portrayed him as having ten hands.

Fétis admired Thalberg for his ability to combine the merits of ‘brilliant’ technique, derived from Clementi, and of the singing style of Hummel and Mozart; in Thalberg’s art, regard for phrasing and expression did not conflict with sparkling passage-work, but the two techniques were superimposed on each other; he combined dash and power with unfailing care for bel canto. In this context one of his most significant works is L’art du chant appliqué au piano, in which arrangements of opera arias are used as teaching pieces for the piano.

With regard to Thalberg’s merits as a composer Schumann, who was not at all favourably disposed towards virtuosos, made an exception in this case; in his reviews for the Neue Zeitschrift für Musik he gave high praise to the Fantasia and Variations op.12 on themes from Norma, the E minor Caprice op.15, the Nocturnes op.16, the Variations op.17 and the Scherzo op.31. Nevertheless, Thalberg’s compositions are of questionable value, and neither the Concerto op.5 nor the Sonata op.56 is worthy of attention. A few minor pieces, such as the nocturnes, the Romances sans paroles, the studies and the Ballade op.76 are more appealing. The most interesting works are the long fantasias: though they give the impression of a potpourri method more often than of genuine invention on well-known themes, they are skilfully and effectively written. Using popular operas as their basis, they helped to bring to the art of piano playing the same kind of emotional feeling which the great singers aroused. Neither of Thalberg’s own operas, however, enjoyed any success.