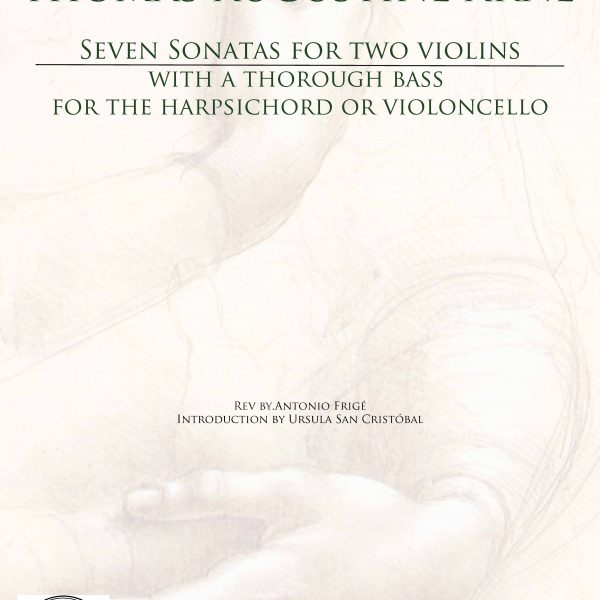 Arne, Thomas Augustine: Seven Sonatas for two Violins with a thorough bass for the Harpsichord or violoncello

Arne inherited his first name from his grandfather and father, London upholsterers and undertakers and office holders in the London Company of Upholders. As a child he adopted the middle name Augustine, apparently to show his allegiance to the Roman Catholic faith of his mother, Anne. His father rented a large house in King Street, Covent Garden, where he ran a thriving business, the Two Crowns and Cushions, although he apparently allowed his own father and brother Edward to die in debtors’ prisons. According to Charles Burney, who became his apprentice in 1744, Arne was sent to Eton, where a passion for music soon became evident: he tormented his fellow pupils ‘night and day’ by playing the recorder, practised the spinet secretly at night during the holidays, ‘muffling the strings with a handkerchief’, and studied composition on his own before taking violin lessons with Michael Christian Festing; Burney wrote that Arne and Festing were both present on 12 November 1725 to hear Thomas Roseingrave win the competition for the post of organist of St George’s, Hanover Square.

The next year Arne was apprenticed for three years to a London attorney, Arthur Kynaston, but he soon abandoned the law for music. Burney wrote that Arne’s father was reconciled to the change by the chance discovery of his son playing first violin in a concert at the house of a neighbour. The opposition cannot have been strong or prolonged, for Thomas Augustine was soon teaching his younger sister Susanna and his brother Richard to sing, and his father had some hand in the company formed in 1732 to put on English operas at the Little Theatre in the Haymarket; he sold tickets for the performances and probably provided financial backing. The company began in March with John Frederick Lampe’s setting of Henry Carey’s Amelia, and followed that with an unauthorized stage production of Handel’s Acis and Galatea (17 May).

That autumn, however, the company split: Lampe remained at the Haymarket while Arne put on a production of Teraminta by Carey and John Stanley at Lincoln’s Inn Fields (20 November) – the first definite record of his theatrical activities – and his own opera Rosamond (7 March 1733), a setting of Joseph Addison’s 1707 libretto. The next season Arne put on his afterpiece setting of The Opera of Operas, or Tom Thumb the Great at the Little Theatre in the Haymarket in competition with a revival at Drury Lane of Lampe’s full-length setting of the same text. Arne’s setting ran for 15 nights and his masque Dido and Aeneas also did well, running for 17 performances.

Arne’s position in the London theatre was strengthened by his sister Susanna’s marriage in April 1734 to the actor and playwright Theophilus Cibber, whose company was in residence at Drury Lane. As a result he became house composer at Drury Lane, and wrote music for a number of plays and pantomimes over the next few years. Another profitable alliance was his own marriage to the soprano Cecilia Young on 15 March 1737, despite her father’s objection to his Catholicism. He now had at his disposal the greatest tragedienne of her time (his sister) and the finest English female singer (his wife), and they contributed to his first enduring success, his setting of Milton’s 1634 masque Comus as adapted by John Dalton (1738); it held the stage beyond the end of the century. Comus exploited the current fashion for old plays, the beginnings of a pre-Romantic interest in the past, though its success also had much to do with Arne’s charming music; it was imitated by Handel in his Milton oratorio L’Allegro, il Penseroso ed il Moderato, written two years later.

By 1738 Arne was one of the leaders of musical life in London. That year he was one of the founder-members of the Society (later Royal Society) of Musicians, along with Handel, Boyce and Pepusch. In 1740 he was commissioned to set David Mallet and James Thomson’s masque Alfred for performance in an entertainment given by the Prince of Wales in the gardens of Cliefden (Cliveden) House, near Maidenhead. The original work seems to have contained only seven musical numbers (including ‘Rule, Britannia’), although Arne rewrote it a number of times, turning it in 1745 into an all-sung oratorio, and in 1753 into an all-sung opera. In the theatrical season 1740–41 he composed music for the Drury Lane productions of The Tempest, As You Like It, Twelfth Night and The Merchant of Venice, including songs such as ‘Where the bee sucks’ and ‘Under the greenwood tree’ that have never been surpassed or forgotten since they were written. Arne had another major success in spring 1742 with Congreve’s 1700 masque The Judgment of Paris, presumably inspired by the unidentified setting performed with Alfred at Cliveden in 1740.

Up to this point, Arne had worked mostly in London. But his sister took refuge in Dublin in December 1741 from the scandal surrounding the failure of her marriage to Cibber, and sang there with Handel in spring 1742, notably in the first performance of Messiah on 13 April. Handel’s success in Dublin presumably inspired Arne to try his luck there: he arrived with his wife and the tenor Thomas Lowe on 30 June and worked there for two seasons. He spent most of his time performing existing compositions, including a number of Handel oratorios, though his own oratorio The Death of Abel was first given at the Smock Alley Theatre on 18 February 1744. On his return journey in August he passed through Chester, where he met the young Charles Burney and agreed to take him to London as his apprentice without the usual fee.

Over the next few years Arne continued his work at Drury Lane, and had a hit with his setting of God bless our noble king, which was sung every night during the crisis caused by the Young Pretender’s rebellion in September 1745. His long association with London’s pleasure gardens also seems to have started that summer, when vocal music formed part of the entertainments at Vauxhall for the first time. According to Burney, Arne’s dialogue Colin and Phaebe was ‘constantly encored every night for more than three months’, and was published in September in the first collection of Vauxhall songs, Lyric Harmony; Arne’s later song collections, notably in the series Vocal Melody (1749–64), also contain many songs from the pleasure gardens.

The 1750s were not very fruitful years for Arne. David Garrick, joint patentee at Drury Lane from 1747, began to prefer other composers, and Arne had several flops, including the all-sung afterpieces Henry and Emma (1749) and Don Saverio (1750). Things came to a head when Susanna Cibber defected to Covent Garden with several other actors at the beginning of the 1750–51 season. Arne followed her and a battle ensued between the two theatres, beginning with competing productions of Romeo and Juliet put on on the same day, 28 September, with rival settings by Arne and Boyce of processional dirges at the end of the play. Arne’s dirge continued to be performed long after Boyce’s was forgotten, but in general he was no more successful at Covent Garden than at Drury Lane, and he had to put on his next major work, the all-sung opera Eliza, at the Little Theatre (1754); it was suppressed after one performance ‘by an Order from a superior Power’. He returned to Drury Lane briefly with his setting of David Mallet’s masque Britannia (1755), though in October that year he returned to Dublin with his wife, his pupil Charlotte Brent and his niece Polly Young.

It soon became apparent that Arne’s marriage was in trouble. He attributed the situation to Cecilia’s frequent illnesses, which he claimed resulted from her ‘passions, equal to raving madness’, while she complained of his repeated philandering. At the end of the season he returned to London with Charlotte Brent, now his mistress, while Cecilia remained in Dublin with Polly Young. He agreed to support her with £40 a year, though in 1758 Mrs Delany found her ‘much humbled’, teaching singing in Downpatrick: ‘She has been severely used by a bad husband, and suffered to starve, if she had not met with charitable people’. However, he evidently attempted to raise money at this period by publishing collections of his music with John Walsh, including Six Cantatas for a Voice and Instruments (1755), VIII Sonatas or Lessons for the Harpsichord (1756), VII Sonatas for Two Violins with a Thorough Bass (1757) and the scores of Britannia (1755), Alfred (1757) and Eliza (1757).

With Charlotte Brent at his disposal, Arne’s fortunes rapidly revived. After Garrick refused her services at Drury Lane, she scored major successes at Covent Garden in Arne’s revision of The Beggar’s Opera (1759), his comic operas The Jovial Crew and Thomas and Sally (both 1760), his Metastasio opera Artaxerxes and his comic opera Love in a Village (both 1762), as well as his oratorio Judith, given at Drury Lane on 27 February 1761. He finally achieved a measure of official recognition on 7 July 1759 with an Oxford doctorate. Arne could not sustain this level of success for long: his comic opera The Guardian Out-Witted only lasted for six performances in December 1764, while the lost L’olimpiade, an opera seria in Italian, failed after only two nights in April 1765. Things were not helped in 1766 by the death of his sister and the marriage of Charlotte Brent to the violinist Thomas Pinto, and in the late 1760s he found little employment at either theatre. He found some compensation in his membership of the Noblemen and Gentlemen’s Catch Club and the Madrigal Society, and in the profitable concerts of catches and glees he gave from 1767, although he was evidently in financial difficulty by 1770, when Cecilia’s lawyer threatened legal action because he was £10 in arrears with his support payments.

Despite this, the last decade of Arne’s life saw the production of some fine works, including An Ode upon Dedicating a Building to Shakespeare (7 September 1769), written for Garrick’s Shakespeare festival at Stratford-upon-Avon, the masque The Fairy Prince (1771), the music for William Mason’s Greek-style tragedy Elfrida (1772) and the lost music for Mason’s tragedy Caractacus (1776), a score that according to Samuel Arnold contained ‘some of the brightest and most vigorous emanations of our English ‘Amphion’’. In October 1777 Arne was reconciled with his wife, though two months later he fell ill and made his will. He died of a ‘spasmodic complaint’, and was buried in the churchyard of St Paul’s, Covent Garden, on 15 March 1778; his effects, including ‘a remarkably fine toned double key’d harpsichord, two guitars, a mandolin, a lute and other valuable effects’, were disposed of on 8 April.