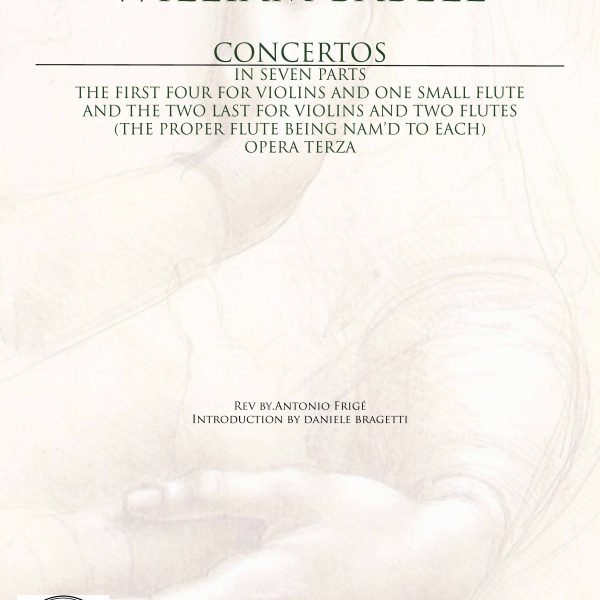 William Babell: (b ?London, c1690; d Islington, London, 23 Sept 1723). English harpsichordist, organist, violinist, composer and arranger. He received his early musical instruction from his father, Charles Babel, a bassoonist in the Drury Lane Theatre orchestra until he was 80, and later from Pepusch and possibly Handel (according to Mattheson, in Der vollkommene Capellmeister, 1739, but denied by Hawkins). Babell led an active professional life in London. As a violinist he was said to have played in the private band of George I, while as a harpsichordist, from about 1711, his name frequently appears in London concert notices, usually in conjunction with those of Corbett, Paisible and (later) Dubourg. He was also associated with Lincoln’s Inn Fields Theatre. From November 1718 until his death he was organist of All Hallows Bread Street and was succeeded there by John Stanley. Babell was buried at All Hallows.

He acquired an international reputation as a harpsichordist largely through his virtuoso arrangements of fashionable operatic arias and overtures, especially those of Handel. His keyboard style was undoubtedly influenced by his close acquaintance with Handel’s playing; it has been proposed that one of the manuscript settings of ‘Vo’ far guerra’ (GB-Lbl) is Babell’s response to a reworking and development of the material by Handel himself (Pont), but this hypothesis has found no support. These arrangements by Babell, although appearing exceptional, nevertheless give an intriguing insight into early 18th-century practices of keyboard extemporization and ornamentation. Burney commented that Babell:

acquired great celebrity by wire-drawing the favourite songs of the opera of Rinaldo, and others of the same period, into showy and brilliant lessons, which by mere rapidity of finger in playing single sounds, without the assistance of taste, expression, harmony or modulation, enabled the performer to astonish ignorance, and acquire the reputation of a great player at a small expence … Mr Babel … at once gratifies idleness and vanity.

Hawkins, on the other hand, considered that Babell deserved his success; he remarked that Babell’s arrangement of favourite arias from Handel’s Rinaldo ‘succeeded so well … as to make from it a book of lessons which few could play but himself, and which has long been deservedly celebrated’. Babell’s reputation reached France, the Netherlands and Germany, where some of his works were published; Mattheson reported that he was said to have surpassed even Handel as an organist.

The slow movements of Babell’s own chamber sonatas, published posthumously, and ‘With proper Graces adapted to each Adagio by ye Author’, illustrate his approach to non-keyboard-designated ornamentation (ex.1), and offer useful comparative insights. In his preface to the original edition, Walsh described Babell as his ‘late lov’d friend’ and remarked that ‘When the World is so unfortunate [as] to lose and esteem’d Author, the only Consolation we have, is the enjoyment of his Works’. He asked owners of Babell’s manuscripts to present them for publication to perpetuate ‘that Beautifull and lasting Monument which his genius rais’d to him in his works’. Tilmouth (in the introduction to his edition of the sonatas in G minor and F minor, London, 1963) wrote that ‘many of the sonatas seem best suited to the oboe, an instrument that at the time was played expertly only by a handful of professionals’, and suggested that this would have prompted Walsh to prescribe other suitable instruments on the title-pages.

Babell’s Concertos in 7 Parts for violins and small flute, or ‘sixth’ flute (a soprano recorder in D), were also published posthumously (c1726); four are for one sixth flute, one for two sixth flutes and one for two trebles. The string parts exclude viola, but require a solo violin. Although Handelian influence is apparent in these works, Italian inspiration is stronger, particularly that of Vivaldi, both with regard to style and execution. The title-page records that the concertos were ‘performed at the theatre with great applause’, and several were probably known for a decade or so before they were eventually published. At least one of them was written by December 1714, when the sale catalogue of Thomas Britton’s collection included ‘12 Concertos by Dr Pepusch, young Mr Babel and Vivaldi’.