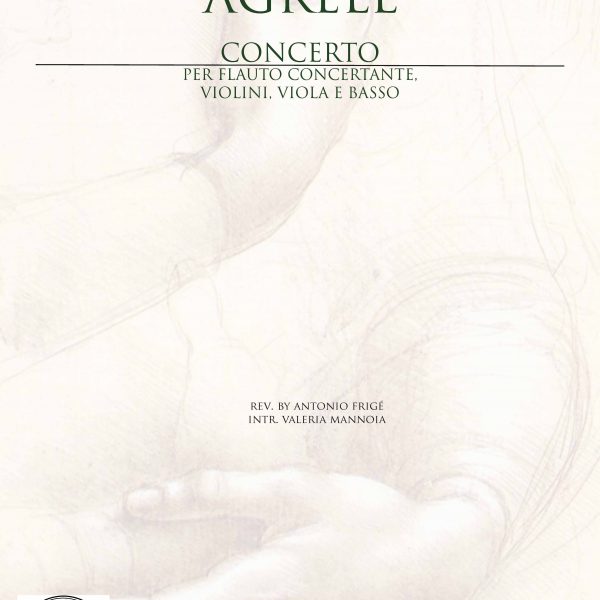 Johann Joachim Agrell: (bLöth, Östergötland, 1 Feb 1701; dNuremberg, 19 Jan 1765). Swedishcomposer, violinist and harpsichordist. His father was a priest. He went to school in Linköping and studied at Uppsala University from 1721 to 1722 or 1723, where he played in the university orchestra, then led by the director musices Eric Burman. Early biographers said that Prince Maximilian of Hesse heard Agrell’s violin playing in 1723 and called him to Kassel. Firm evidence of Agrell’s activity there is, however, found only from 1734, when F. Chelleri was Kapellmeister. He was still working in Kassel between 1737 and 1742 during the reign of Count Wilhelm VIII and the court long owed him payment for service, as well as ‘ale and food money’, for the years 1743 to 1746. During his time at Kassel Agrell is reported to have made several journeys, visiting England, France, Italy and elsewhere.

Uncertain economic circumstances seem to have driven Agrell to seek the post of Kapellmeister in Nuremberg, a post which he obtained in 1746 (succeeding M. Zeitler); he combined this with duties as director musices, leader of the town musicians and holder of the position of ‘chief wedding and funeral inviter’, which gave him the right to compose music for weddings and other festivities. One of his duties was to direct music in the town’s main churches, in particular the Frauenkirche. Of his work in the Musikalische Kirchen-Andachten only the text survives. On 3 September 1749 Agrell married the daughter of an organist, the singer Margaretha Förtsch (d 1752).

Practically none of Agrell’s output from his youth in Sweden survives, though a polonaise from a collection entitled En notbok printed in 1746 (which may actually date from his early years) survived as a reel in the tradition of Swedish fiddlers throughout the 19th century. Another sign of contact with his homeland is the dedication to Adolf Fredrik of Holstein-Gottorp, successor to the Swedish throne, of his Sei sonate per il cembalo solo (1748), in which he referred to his ‘dear homeland, Sweden’, and remarked that ‘fate had so far forced him to live abroad’; in addition, Agrell’s published works were sent to the Swedish royal chapel at the request of J.H. Roman and others.

Agrell’s works divide into two categories: the vocal music, occasional and commissioned, much appreciated in his day, but now lost; and his many instrumental works, most of which were published during Agrell’s lifetime, sometimes on their own, sometimes in anthologies. Among the most important instrumental works are his symphonies, chiefly from the period 1735–50, and his numerous harpsichord concertos from the 1750s and 60s. The symphonies, like the work of his compatriot, Roman, constitute an interesting early experiment in this genre with the beginnings of thematic contrast. The instrumentation is often on a large scale, with brilliant parts for woodwind and brass. Agrell’s reputation as one of the leading proponents of the emerging symphony led Antonio Vivaldi to ask him to contribute to a concert of ‘modern music’ in Amsterdam in 1739. He was evidently influenced from many directions, at first by Chelleri and Roman, among others, later by the more up-to-date Italian composers of his time and by German music of the milieu in which he worked. He had a sound technique, and was fluent in the new forms of his time. His style has clear galant tendencies, but even if Agrell (as one might suppose) harboured aesthetic ideals like those of Mattheson, he was not really a gifted melodist, a fact which occasioned Schubart’s oft-cited judgment (Ästhetik der Tonkunst, Vienna, 1806): ‘A true artist, but a cold nature’.