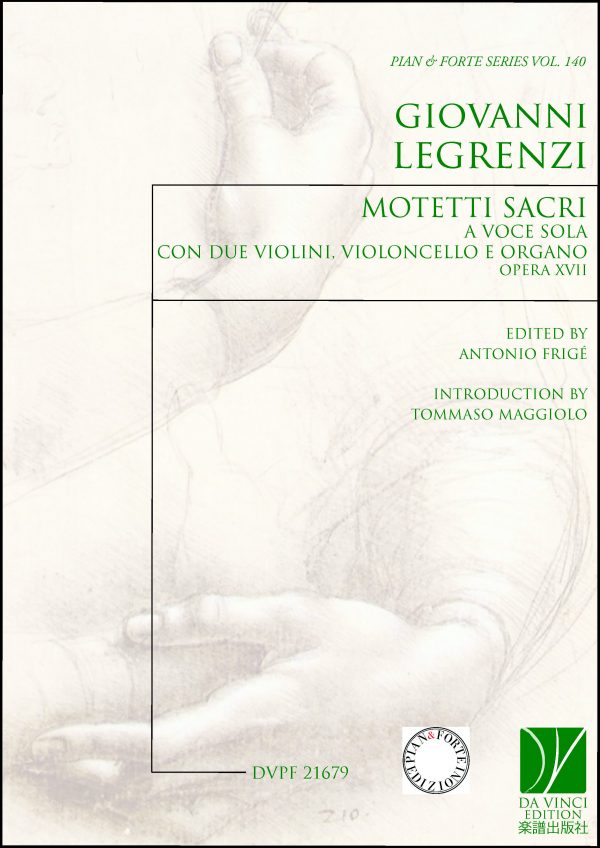 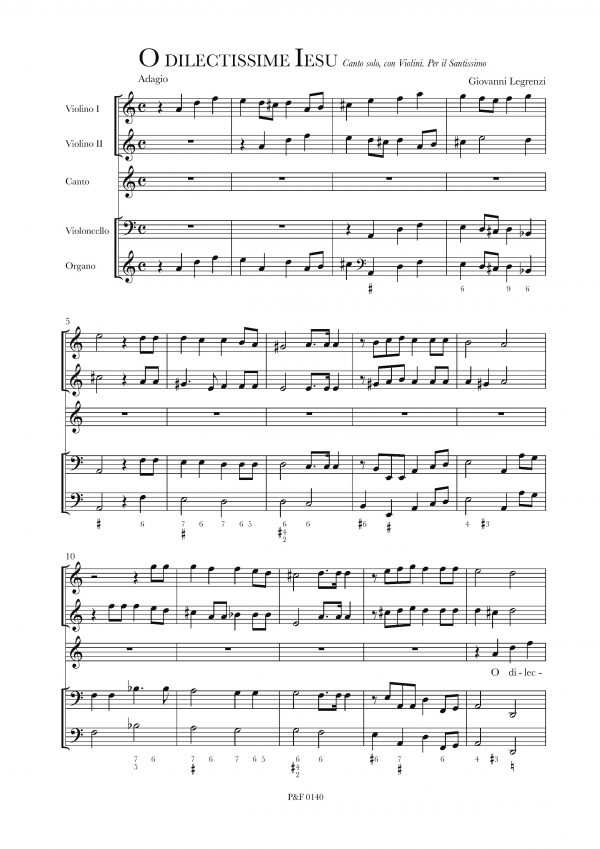 Legrenzi was a son of Giovanni Maria Legrenzi, violinist at the parish church in Clusone and a minor composer. Caffi’s statement that he studied in Venice with Giovanni Rovetta and Carlo Pallavicino is neither supported by documentary evidence nor suggested by what is known about his early years. On 30 July 1645, newly arrived from Clusone, he became organist at S Maria Maggiore, Bergamo, and was elected a resident chaplain there on 2 May 1651, having been ordained earlier that year. On 6 September 1653 he sought and was granted the title of first organist. On 30 December 1654 he failed for some unstated reason to be reconfirmed as organist. After several inconclusive votes by the governing body he was reinstated on 23 February 1655 but left at his own request on 31 December of that year. He was, however, still serving there in some capacity in April 1656. His published output from this period consists primarily of church music.

Legrenzi’s years at S Maria Maggiore, Bergamo, coincided with the final period of its musical glory. The three maestri di cappella with whom he served, G.B. Crivelli, Filippo Vitali and above all Maurizio Cazzati, were handsomely supported in their endeavours, as is indicated by the huge sums spent annually on music for the most important feast, the Assumption of the Blessed Virgin Mary. But by far the largest expenditure was in 1665 and 1666, when Legrenzi returned as visiting maestro. Musicians were assembled from such distant points as Venice, Ferrara, Mantua and Lucca, the total forces in 1665 comprising 43 musicians, only 11 of whom were attached to the basilica. Legrenzi’s other activities in Bergamo included membership of the Accademia degli Eccitati.

Later in 1656, probably with the assistance of Cazzati, he became maestro di cappella of the Accademia dello Spirito Santo at Ferrara, an institution devoted, like the Scuola Grande in Venice, to the performance of sacred music and oratorios. Ferrara was a more vital musical centre than Bergamo and provided him with both the incentive and the opportunity to write operas and oratorios. His first opera, Nino il giusto, dates from 1662. Ferrara also provided him with indispensable aristocratic connections, which he cultivated assiduously. The most important of these was with Ippolito Bentivoglio, who was active in the affairs of the academy, a supporter of opera, librettist for at least two of Legrenzi’s dramatic works and a lifelong patron and friend, who appears to have assisted him in obtaining first performances in Venice in 1664 and Vienna in 1665. Except for three operas, one oratorio and several sonate da camera and dances, Legrenzi’s output during these years continued to be devoted to church music. He appears to have left Ferrara in June 1665 after the completion of his third opera, Zenobia e Radamisto. But strong ties with Ferrara continued, as is seen from his numerous letters to Bentivoglio up to 1685 and in the performance of five oratorios there between 1677 and 1678.

With his departure begins a period of almost five years in which there is no certain information on his positions, except for those he sought unsuccessfully or refused. These include many of the most important posts in northern Italy and several beyond. During these years he published only church music. From a letter of 14 April 1665 it is clear that he had been offered a post in Modena, probably as successor to Marco Uccellini as maestro di cappella of the cathedral. He refused it, as well as an offer he claimed in the same letter to have received from S Maria Maggiore, Bergamo, to return as maestro di cappella in succession to G.B. Pederzuoli. A letter of 17 July 1665 shows that Legrenzi had enlisted the help of Carlo II Gonzaga, Duke of Mantua, in a bold scheme to obtain the post of Kapellmeister at the Habsburg court in Vienna. His attempt was unavailing; the post was occupied by Antonio Bertali until 1669. According to his own account he was subsequently appointed a director of music at the court of Louis XIV but was unable to assume the position because of a grave illness that incapacitated him for a year. The post to which he had been named was probably that of sous-maître of the royal chapel, which since 1663 had been divided among four men, Henri du Mont, Pierre Robert, Thomas Gobert and Gabriel Expilly. The appointment probably dated from 1668, the year in which Gobert retired. Legrenzi is next found in 1669 competing for the post of maestro di cappella of Milan Cathedral as successor to Michelangelo Grancini, but G.A. Grossi was elected. In August 1670 he enlisted the aid of Cardinal Girolamo Buonvisi, a patron from his Ferrarese days, in obtaining a similar post with Ranuccio II Farnese, Duke of Parma; but there was no vacancy, the incumbent, Marco Uccellini, continuing in the post. These years also saw the staging in Venice of two of his operas: L’Achille in Sciro in 1664, and Zenobia e Radamista (with revised libretto and entitled Totila) in 1665.

By 1670 at the latest Legrenzi was living in Venice, where he began to hold posts in numerous religious institutions, always, it seems, with an eye on attaining a position in one of the major churches in northern Italy. In 1670 he was appointed maestro di musica of the Ospedale dei Dereletti. In September 1671 he was a candidate for the post of maestro di cappella of S Petronio, Bologna, in succession to Cazzati. During the protracted deliberations, which included four votes on the candidates, his prospects rose and fell, and at one point they were better than those of the ultimate winner in 1674, G.P. Colonna. Sometime in 1671 Legrenzi had also been appointed maestro di coro to the Congregazione dei Filippini at S Maria della Fava, a post he appears to have relinquished in 1680. In 1676 he abandoned his position at the Ospedale dei Derelitti in favour of one as maestro di coro of the Ospedale dei Mendicanti, to which he was elected on 7 June. In a letter seeking his release from the Derelitti that presumably dates from 1676, Legrenzi enumerated the works he had composed while serving that institution: four Masses, more than 70 psalms and 80 motets, five services of Compline, hymns, string sonatas and keyboard sonatas. It is not known whether any of these works survive, although it is conceivable that some of the motets were published in his opp.10 (1670) and 15 (1689), while some sonatas appeared in his second op.10 (1673).

On 30 April 1676 Legrenzi made his first attempt at becoming maestro di cappella of S Marco, as successor to Cavalli. He lost by one vote to Natale Monferrato, for long the vicemaestro and Legrenzi’s superior at the Mendicanti. Given the closeness of the vote it is odd that he did not compete two weeks later for the vacant post of vicemaestro, since it was this post that he sought and obtained on 5 January 1681, succeeding Antonio Sartorio; he was sole candidate and was elected unanimously.

During his early years as vicemaestro, Legrenzi retained his post at the Mendicanti, succeeding Monferrato as maestro there on 26 January 1683, and relinquishing the position on 16 August 1683. Upon his appointment at S Marco there was a marked increase in the number of singers and instrumentalists hired. The increase continued until his election as maestro on 16 April 1685, following Monferrato’s death, at which time it appears the alarmed procurators of S Marco acted to limit further expansion. In fact during Legrenzi’s years at S Marco both the cappella and the concerto attained their largest recorded size. On 23 April 1686 the procurators authorized a choir of 36 voices, nine to a part, but this balance was never achieved in Legrenzi’s time: in 1687 the choir consisted of six sopranos, seven altos, thirteen tenors and ten basses. On 21 May 1685 they had moved to reduce the number of instrumentalists to 34: eight violins, eleven violettas (violas), two viole da braccio (?cellos), three violones, four theorbos, two cornetts, one bassoon and three trombones. But the procurators were eminently pleased with his service, as they unanimously granted him the highest recorded salary as both vicemaestro and maestro: his salary as maestro from 1687 amounted to 470 ducats, ‘to the person and not to the office’.

Legrenzi’s years as vicemaestro were his last and most prolific in the field of opera, two appearing in Venice each year between 1681 and 1684. As maestro he turned again to the composition of sacred music, writing responsories for Holy Week, a collection of motets (op.15) and a mass dedicated to the Madonna of Loreto, but none of the music he composed for the S Marco cappella seems to have survived. He was also involved in the special services held in 1687 in celebration of the last victories of the Venetians in their costly wars with the Turks.

In his last years his house opposite S Lio, where he lived with his sister Giovanna, was a centre of musical life. At one concert held there early in 1688 three French sisters sang duets and trios by Lully, and some of his own instrumental works were performed. From 1687 he was also the moving force behind the foundation of the sovvegno (a mutual-aid society) of musicians in Venice. After 1687 his activities at S Marco were curtailed by an illness that was to prove fatal. He was buried in S Maria della Fava. Of all the students he is reputed to have taught there is certain information on only one, his nephew Giovanni Varischino, to whom he bequeathed his unpublished works: Varischino subsequently published at least two collections (opp.16–17) and may have published a third (op.18), of which no copies are extant.

Legrenzi’s rise to fame, honour and wealth was remarkable. As a young man from the provinces his resources were so meagre that he required a title of patrimony, granted in 1649, in order to be ordained. But by 1653 he was able to underwrite the costs of educating three boys (one of them his brother Marco) at the Accademia Mariana at Bergamo. At his death he owned property in Cluson