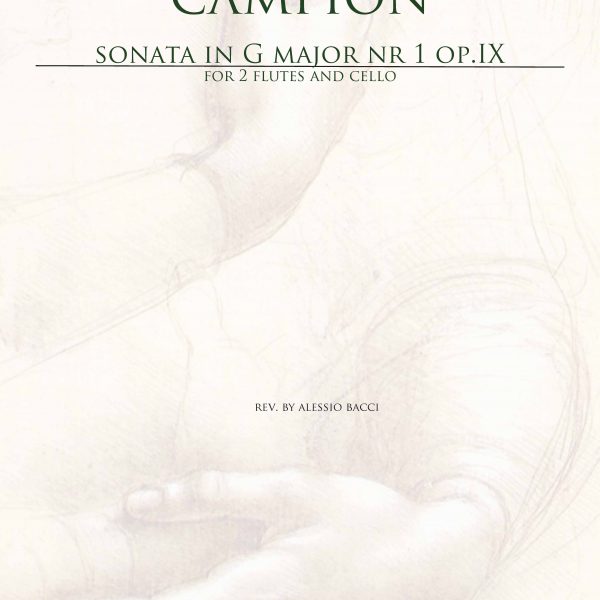 Charles-Antoine Campion: (b Lunéville, 16 Nov 1720; d Florence, 12 April 1788). Italian composer and violinist of French birth. The formative years of Campioni are still uncharted, but it is worth noting that during his youth the lively musical life at the Lorraine court was under the direction of the accomplished French composer Henry Desmarets. Because the father was in the service of the court, it has been supposed that the family followed the court to Tuscany in about 1737 when the Duke of Lorraine succeeded to the grand duchy of Tuscany. According to Anton Raaff, Campioni was also the product of the Paduan school of Tartini. By 1752 he was maestro di cappella at Livorno Cathedral; from 1763 until his death he was maestro di cappella to the grand duke in Florence, where he also served at the cathedral of S Maria del Fiore and at the oratory of S Giovanni Battista.

For several months in 1761–2 Campioni was evidently in Paris, where he supervised the publication of several works including a revised reissue of Paris op.2, the harpsichord sonatas (Paris, op.4) and a Salve regina (the only published sacred work). Perhaps the London (Walsh) series of string works had followed the order and grouping originally prescribed by the composer, but Campioni, in preparing further sets of trio sonatas (opp.6–7) for Paris publication, was obliged to regroup them to complement Amsterdam or Paris sets already in circulation there.

Campioni’s string trios and duos were popular for more than two decades, with publishing centres in London, Paris and Amsterdam. The London issues were widely disseminated, reaching the Virginia colony where the young amateur violinist Thomas Jefferson was an enthusiast and wished to own all of Campioni’s string music. Jefferson made a thematic catalogue of the seven collections he then owned, and this catalogue still serves as an aid to sorting out the bewildering confusion of Campioni’s printed works. By 1789, when he left Paris, Jefferson owned nearly all of the authentic string music. Most modern revivals of Campioni’s chamber music have been connected with Jefferson’s collection or with colonial American music-making. The single set of harpsichord sonatas may have first been written for Campioni’s wife Margherita who, according to Burney, was a ‘neat’ harpsichordist as well as accomplished painter.

Among surviving sacred works (masses, responsories and offertories) several were occasioned by imperial events, including requiem settings for Emperor Franz I (1766) and his widow Maria Theresa (1781). A solemn Te Deum of March 1768, hailing the February birth of the royal heir (Francis Joseph; from 1792 Emperor Francis II) required more than 150 performers.

Burney visited Campioni in Florence in 1770, perhaps in part because of his large collection of early music. His position at court evidently provided leisure and means to become an ardent antiquarian and Burney estimated Campioni’s collection to be second only to that of Padre Martini. (Campioni’s surviving correspondence with Martini is in I-Bc.)