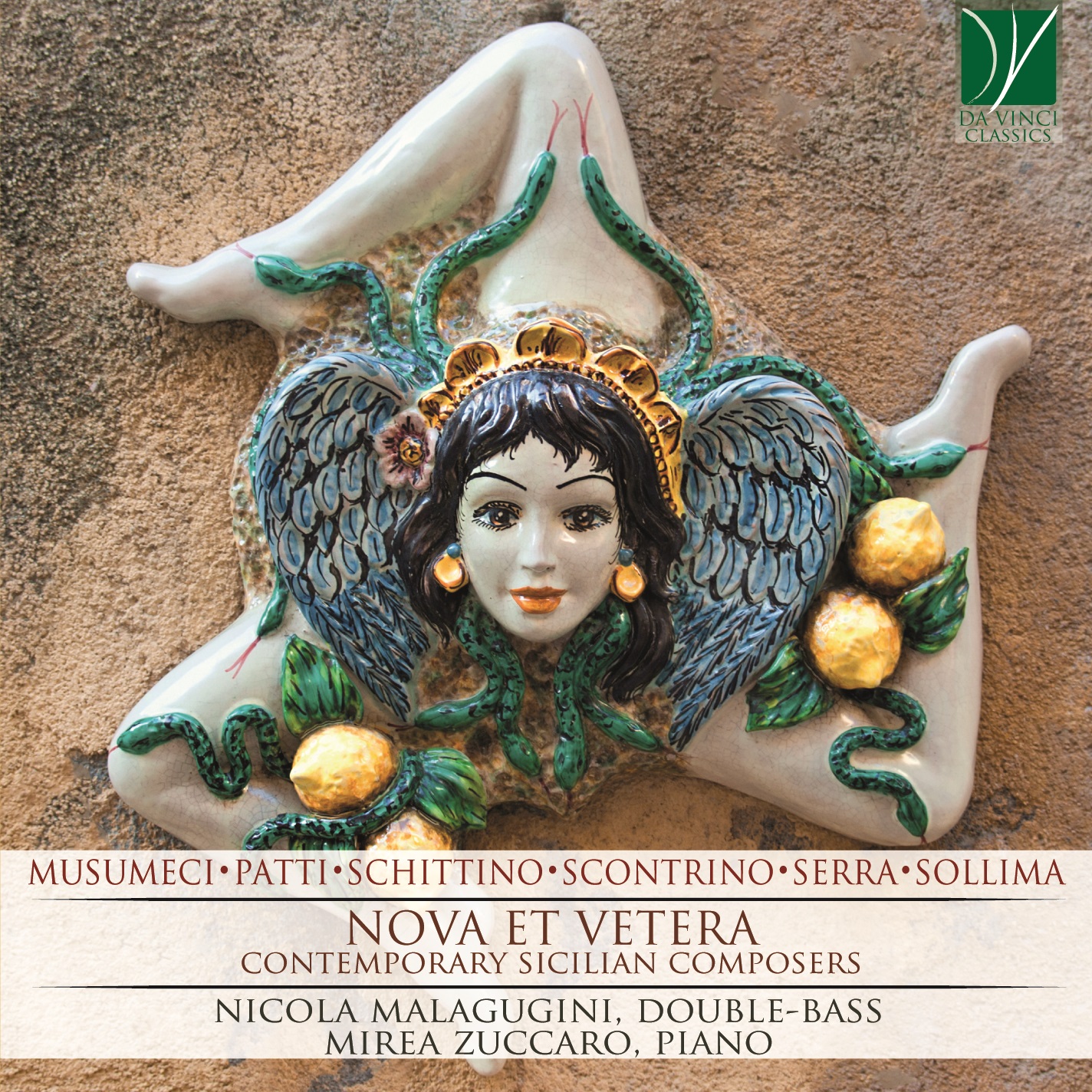 FROM ALBUM NOTES by Nicola Malagugini:

Usually, traditional music is that one which the ethnomusicologists record in isolated villages from the voices of old people singing ancient lullabies and work or religious songs.
The Sicilian traditional music recalls archaic atmospheres, the Arabian past of the island or maybe also the more ancient worlds of the population of the Mediterranean area. The use of the voice, the pauses, the character resulting from this melodious world, tell us about an almost disappeared reality, now flat on television and internet world standards.
Sicily gave me really much and this work aims to be a tribute to its most characteristic part. Moving from those songs, I wondered if it could be possible to create some new works bringing us back to the origins, and if it could be possible to be modern without being flat on modernity. Actually, if it could be possible to repossess the past giving it a new life. […] (Translation by Fabiana Binarelli)

Mirea Zuccaro: Mirea Zuccaro was born in 1999. She started to play piano at 4, with her mother. She get the degree at the conservatory of Palermo, summa cum laude and honorable mention, under the guidance of Donatella Sollima. She also attended master classes with Epifanio Comis and Violetta Egorova at Accademia pianistica Siciliana, with Giuseppe Andaloro and Pietro Rattalino.
She won several national and international competitions, like Pedara, Lamezia Terme, Gioia del Colle, Padova, Crotone, Enna. She played recitals in Sicily, Paris and Vienna and with orchestra, in Palermo (Conservatory orchestra) and with Chernovtsky Symphonic Orchestra. She is now continuing to improve with Nora Doallo in Lugano and studying medicine at University of Catania.

Malagugini, Nicola (Double-Bassist) born in 1977. He btained his diploma in double bass in 2001, with teacher F. Garberoglio. He has been principal bass in the Italian Youth Orchestra. He continued studying with A. Bocini, L. Milani, G. Klaus and G. Ettorre. After a degree in Economics at the University of Bologna, in 2002 began his professional activity winning several auditions and working with Pomeriggi Musicali di Milano, Orchestra Sinfonica di Roma, Orchestra Filarmonica della Scala and Orchestra del Maggio Musicale Fiorentino. In 2014 he won the chair of principal double bass in Rai Orchestra of Turin. Since 2004 he is principal double bass in the Orchestra of Teatro Massimo Bellini, Catania.

Giovanni Sollima was born in Palermo in 1962 into a family of musicians. He studied in Palermo, Salzburg and Stuttgart, and, still a teenager, embarked on a brilliant international career of cellist, collaborating with Claudio Abbado, Martha Argerich, Jorg Demus and Giuseppe Sinopoli.

Alongside the soloist carrer, his creative curiosity led him to explore new frontiers in the field of Composition: his unmistakable style is characterized by contaminations between different genres: minimalism, rock, electronic and ethnic music from all over the Mediterranean area, with echoes of ancient and baroque music, on the basis of a thorough classical training.

For cinema and television he composed for Peter Greenaway (The Tulse Luper Suitcases and Nightwatching), John Turturro (Evidence for a Sicilian Tragedy), Carlos Saura (La Jota), Marco Tullio Giordana (One Hundred Steps and The Best Youth), Lasse Gjertsen (Daydream). For the theater he wrote and performed music for directors such as Robert Wilson, Alessandro Baricco, Peter Stein. In 2006 Peter Greenaway chose his music for the large installation staged in Amsterdam in the fourth centenary of Rembrandt. In the dance field he collaborated with many great choreographers, such as Karole Armitage, Bebe Miller and Carolyn Carlson who, at the Venice Biennale, made him play on stage, among the dancers, using his scenic charisma.

As a soloist, or with different instrumental groups, he performed his compositions all over the world: the Carnegie Hall, the Merkin Hall and the Brooklyn Academy Music in New York, La Scala in Milan, the Queen Elizabeth Hall and the Wigmore Hall in London, the Salle Gaveau in Paris, the Tchaikovsky Hall in Moscow, the Liszt Academy in Budapest, the Istanbul International Festival, the Tokyo Summer Festival, the Sydney Opera House, the Tanglewood Festival, the Santa Cecilia Auditorium in Rome, the Venice Biennale, the Ravenna Festival, the Konzerthaus in Berlin, the Kronberg Festival, the Kunstfest in Weimar, the Lockenhaus Festival, the Amsterdam Biennäle, the Piatigorsky Festival in Los Angeles, the opening of the Italian Pavilion at Expo 2010 in Shanghai with La Scala Orchestra, with tours in the UK, Holland, the U.S.A., Canada, Russia, Japan, China, Australia. Prestigious venues, as well as alternative ones, nearer to the younger audience, such as the Knitting Factory in New York, a real underground temple, when the Pulitzer Prize Justin Davidson describes him as “The Jimi Hendrix of the Cello”. Remarkable is the cello performance in the Sahara Desert and the one underwater in a sicilian’ gebbia (a tank for irrigation’ water).

In 2012 he had been the main creator and the artistic director of the explosive musical ensemble of the 100 Cellos, which in six years had performed with his “Itinerant Festival” in Rome, Milan, Budapest, Turin, Ravenna and Lucca.

The Municipality of Milan commissioned to Sollima the sound theme for Expo 2015, which inaugurated the new exhibition hall for the Pietà Rondanini by Michelangelo.

On June 2, 2017, for the Festa della Repubblica, he performed a concert at the Quirinale in front of the Presidents of the Republic and of the Chambers, and all the ambassadors from all over the world. Right now he is writing the music for the next movie by Anatoly Vasiliev.

Among the many cd, we remember Aquilarco for Point Music/Polygram (on invitation by Philip Glass), Works and When We Were Trees for Sony, Neapolitain Concertos and the Sonatas for Cello by Giovanni Battista Costanzi for Glossa Music, Caravaggio, 100 Cellos live at Teatro Valle and Aquilarco live in New York for Egea Music, Onyricon, Il Caravaggio rubato and A Clandestine Night in Rome for Decca.

Sollima plays a cello Francesco Ruggeri (Cremona, 1679). Moreover he uses in his creations western and eastern acoustic instruments and electrical and electronic tools, mixed with others of his own invention, such as the aquilarco, and others especially made for him, like the tenor violin present in the paintings of Caravaggio and an ice-cello that in the winter of 2007 he played at 3200 meters above sea level, in an igloo’ theater built in a glacier of the Dolomites.

Since 2010, he’s been teaching at the National Academy of Santa Cecilia, where he was awarded the title of Academician.

He publishes his works with Casa Musicale Sonzogno in Milan.

Luciano Maria Serra is an Italian composer, conductor and pianist. Born in Sicily, in 1975, he writes music for the stage, opera, orchestral and chamber works, and music for screen and multimedia.
In 2015 he was the assistant of Gustavo Dudamel (Mozart’s Nozze di Figaro, Berlin Staatsoper) and in 2017 of Domingo Hindoyan (Rossini’s Semiramide, Opera National de Lorraine).
His music was performed by Edicson Ruiz, Veronika Eberle, Guido Rimonda, Andrea Lucchesini, Quartetto di Cremona, in the musical seasons of Virée Classique Festival (Montreal), Viotti Festival (Vercelli), Teatro Valli (Reggio Emilia), Mãrvao International Music Festival, Associazione Musicale “Eliodoro Sollima” (Palermo), Associazione Siciliana Amici della Musica (Palermo), Associazione Musicale Etnea (Catania), Teatro Machiavelli (Catania), Orestiadi (Gibellina).
His film scores was performed in international sphere (Festival Internazionale del Cinema d’Animazione of Athens, Ars Electronica Festival of Vienna, Arcipelago Film Festival of Rome, Costaiblea Film Festival of Ragusa).
As conductor, he has a wide repertoire of opera and symphonic music. He conducted also the Orchestra Sinfonica Siciliana of Palermo in a concert dedicated to the music of Mozart and Haydn.
As pianist he played at Philarmonie of Berlin and in many others concert halls.
Luciano Maria serra was graduated in Composition, Conduction and Piano at the Conservatorio di Musica of Palermo.