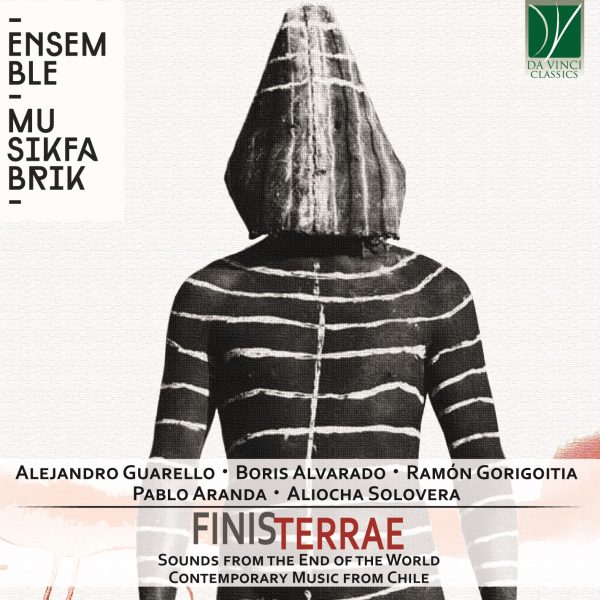 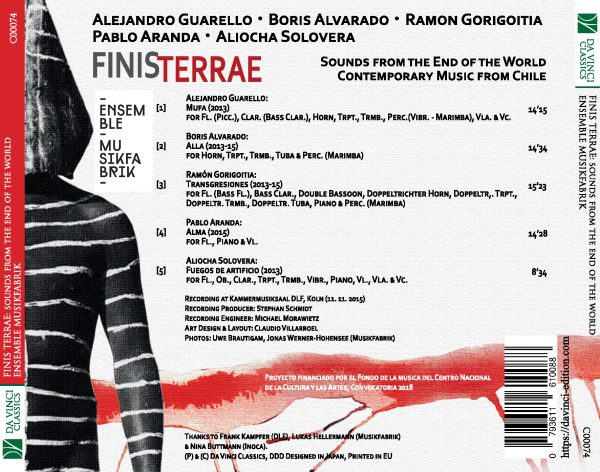 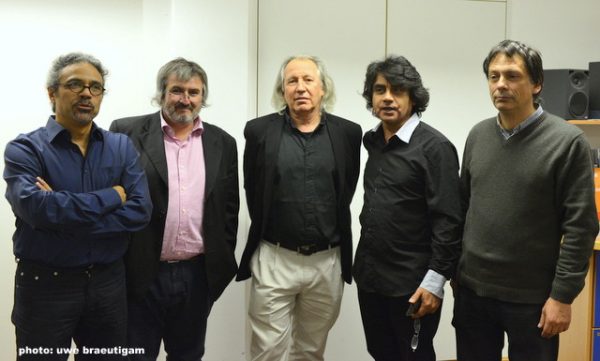 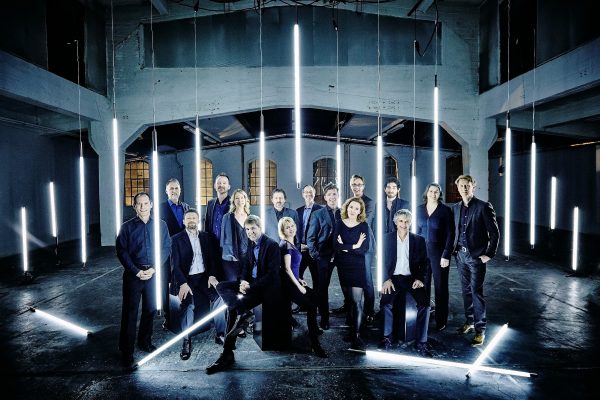 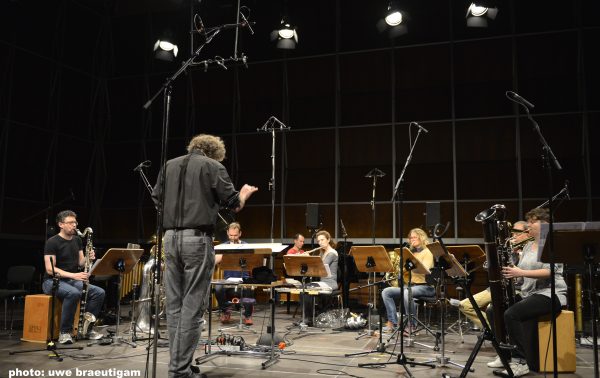 Finis Terrae: Sounds from the End of the World, Contemporary Music from Chile

FINIS TERRAE: Sounds from the End of the World

The musical Exchange project FINIS TERREA between five chilean composers and the Ensemble Musikfabrik allows us an insight view into the still growing New Music Scene in Chile. The title FINIS TERRAE points to a certain geographic exclusion Chiles far away from the international events. In spite of its also historical isolation, the country has brought up again and again new impulses in different art disciplines. Through the global networking the presence of chilean artists, who expose their work in foreign countries, has gradually augmented in the last decades. This CD presents the works of the chilean composers Alejandro Guarello, Boris Alvarado, Ramón Gorigoitia, Pablo Aranda and Aliocha Solovera, a commission from Siemens Music Fundation, which were premiered by Ensemble Musikfabrik in a concert on November 11th 2015 at the Chamber Hall of Deutschlandfunk Broadcasting in Cologne, Germany. For the support of the FINIS TERRAE Project and the production of this CD we like to express our gratitude to the Siemens Musikstiftung, DIRAC, the District government of Cologne, Deutschlandfunk Radio, the Catholic University in Santiago and Valparaíso, the chilean Artist Network INOCA e.V. and the musical Fund from the chilean Ministry of culture, CNCA

Ever since its formation, Ensemble Musikfabrik has had the reputation of being one of the leading ensembles for contemporary music. Following the literal meaning of its name, Ensemble Musikfabrik is particularly dedicated to artistic innovation. New, unknown, and often personally commissioned works in unusual media are typical of their productions. The results of their extensive work, usually taking place in close collaboration with the composers, are presented by the Cologne-based international soloist ensemble in about 80 concerts a year in both Germany and abroad, at Festivals, in their own series “Musikfabrik in WDR” and in regular radio recordings and CD productions. The musicians themselves take the responsibility for making all-important decisions. Exploring forms of modern communication, and new possibilities for expression in musical and theatrical areas, are a focal point. Interdisciplinary projects that can include live electronics, dance, theatre, film, literature and creative artists, along with chamber music, and the confrontation with works using open form and improvisation, extend the traditional conducted ensemble concerts. Ensemble Musikfabrik is supported by the state of North Rhine-Westphalia.

Alejandro Guarello (1951): Born in Viña del Mar (CHILE) the 21th August 1951. His creative work includes more than 74 works of chamber and symphonic music, a lot of these have been performed in Chile, Europe, Japan and the United States. Moreover, someones have received differents awards and prizes in Composition's Competitions. There are three monographics CD and a severals records with his works Alejandro Guarello (1998), Retrospectiva (2000) y Nueva Música para Cuerdas (2014). Alejandro Guarello had developed a great activity as director of contemporary music. He founded and organized and directed the music composition studies at the Pontificia Universidad Católica de Chile and also founder and artistic director of the Contemporary Music Festival UC the oldest festival in Chile.

Aliocha Solovera Roje (1963): Born 1963 in Santiago de Chile Solovera has had since 1987 a number of public presentations of his works in many parts of Europe and elsewhere in the world (Ljubljana, Viena, Copenhagen, Zagreb, Bucharest, Koln, Frankfurt, Den Haag, Madrid, Santiago de Chile, Sao Paulo, Montevideo, Buenos Aires, Mexico C.F., Melbourne and others) and he has had recorded for different radio stations such as: ORF-Austrian National Radio, WDR-West Germany Radio, HR Hessichen Rundfunk,, RTV Ljubljana-National Slovenian Radio, Croatian HRT, Romanian RTV, Radio Cultura FM of Sao Paulo, Radio Beethoven -Santiago, Radio Universidad de Chile. When still a student he has received a number of awards, including scholarship given by the Alban Berg Foundation, the Wurdigung award by the Austrian Ministry of Science (1993), Second Prize in the Slovene Republic’s First Musical Composition Contest (1993), Sao Paolo’s Lapandia Foundation Prize (2000); Charles Ives price from the Instituto Chileno Norteamericano (2003), Chile’s Altazor Award for direction of the Ensamble Contemporaneo (2003). Presently he is professor of composition in the Faculty of Arts of the Catholic University of Chile.

Boris Alvarado (1962): Born in 1962 in Valparaiso, Chile. PhD in composition from University Fryderyk Chopin, Warzaw, Poland and Doctor © in Philosophy at PUCV-Chile. In Chile he studied composition with composers as Alejandro Guarello and Andrés Alcalde. In Poland with Krzysztof Penderecki and Marian Borkoswski. He takes part as composer and director in the concerts of Contemporary Music over the world. And he conducted many orchestras in America and Europe. Full time Professor of the Pontificia Catholic University of Valparaiso-Chile. He has been invited for lectured on contemporary Chilean music in the most important Music Academy. Similarly, his works have been released in several countries of America, Europe and Asia are being registered in several CDs, as well, as published books and articles of music and philosophy.

Studied a Bachelors degree in Composition in the Facultad de Artes de la?Universidad de Chile winning later a DAAD scholarship to persue a Masters degree in Composition at the Cologne University of music in Germany. His learning was guided by Cirilo Vila and Andrés Mayor in Chile, Johannes Fritsch in Germany and Franco Donatoni in Italy. He participated in the Contemporary Music Summer Courses in Darmstadt and attended the classes of Brain Ferneyhouhg with the Germans Karlheinz Stockhausen, Mathias Spahlinger and Helmut Lachenmann.
Some of his most recent works are: "Da" For two traverse flutes, "Parphe" for orchestra, "Per Franko" for traverse flute, "Alma" trio for flute, piano and violin and "El Desvarío del Apuntador" Scenic work. Since the year 2000 he directs the ensemble Contemporary Music Workshop with which he has performed countless concerts and premieres of Chilean and foreign composers. Since 2004 he has been the creator of the biennial International Meeting of Composers. www.encuentrocompositores.cl