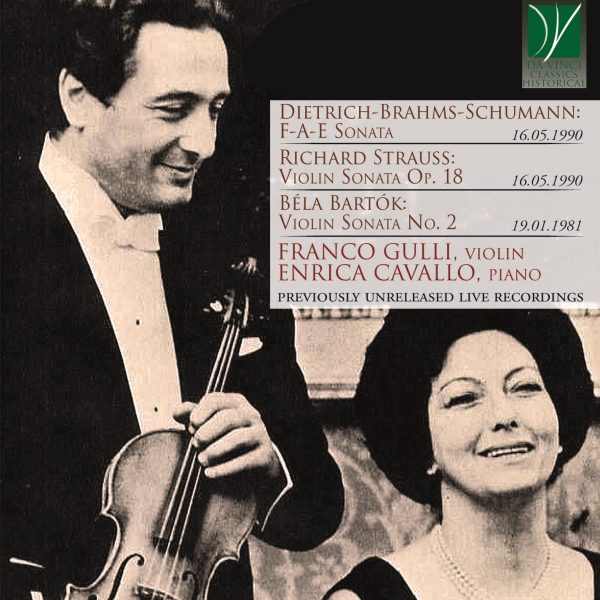 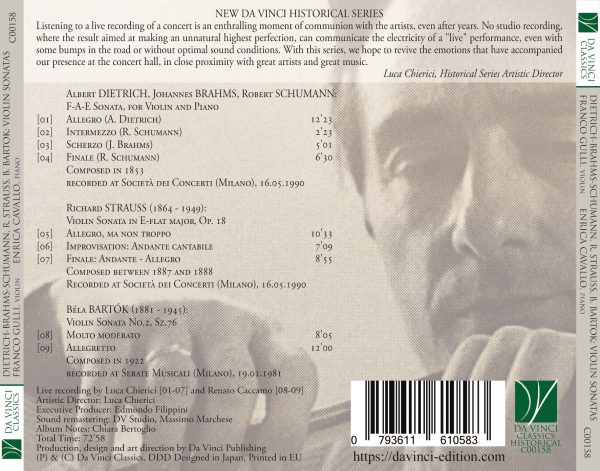 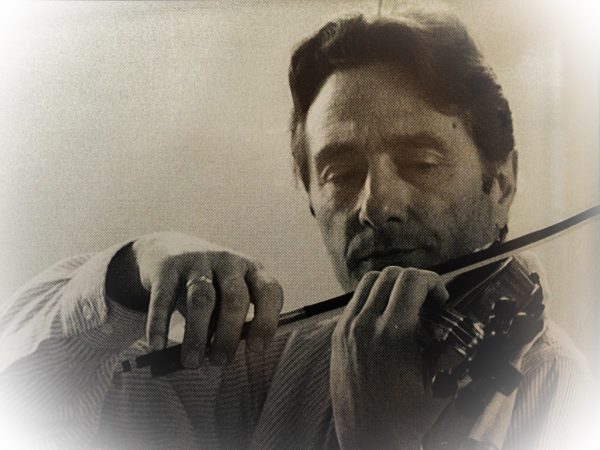 Listening to a live recording of a concert is an enthralling moment of communion with the artists, even after years. No studio recording, where the result aimed at making an unnatural highest perfection, can communicate the electricity of a “live” performance, even with some bumps in the road or without optimal sound conditions. With this series, we hope to revive the emotions that have accompanied our presence at the concert hall, in close proximity with great artists and great music.

Enrica Cavallo: The Italian pianist, Enrica Cavallo-Gulli, gave, as a child prodigy, recitals everywhere in the years preceding World War II. She was educated at the Verdi Conservatory in Milan. After the war, Enrica Cavallo met the Italian violinist Franco Gulli. In 1947 they formed the world renowned Gulli-Cavallo Duo, and in 1950 they got married. In subsequent years they toured all over the world, and the duo was active until Franco Gulli’s passing in November 2001. In addition, Enrica Cavallo taught at the Verdi Conservatory in Milan. In 1993 she was appointed to the faculty of Indiana University School of Music in Bloomington. She was Professor of Music at the Jacobs School from 1974 to 1991.

Franco Gulli: Born on 1st September 1926 in Trieste, Italy, Franco Gulli was one of the most notable and active Italian violinists of the latter part of the twentieth century. He began his studies with his father, a pupil of Ševčík and Mařák at the Prague Conservatory and fellow student of Prihoda, then continued with Arrigo Serato in Siena and later with Szigeti in Switzerland. At the moment of his degree, it was one of the most distinguished young violinists of his generation, performing all over the world, from Teatro alla Scala (Milan) to Carnegie Hall (New York).
He was an esteemed member of several musical institutions such as the Accademia di Santa Cecilia in Rome, the Accademia Cherubini in Florence. He led for several years the Orchestra of the Pomeriggi Musicali (Milan) and I Virtuosi di Roma.
Gulli was even a renowned teacher: over his whole lifetime, he gave masterclasses all over the world, held classes and sat on the juries of several international competitions in London, Munich, New York, and Indianapolis, where he held a Professorship at Indiana University.
Particularly notable are the revisions of the Bach's "Sonatas & Partitas" (Suvini Zerboni), the 10 Beethoven's Violin Sonatas and the Paganini's Caprices Op.1, both for Curci Edition.
Gulli rarely recorded with other pianists. Before to marry the pianist Enrica Cavallo in 1948 and start a long-lived duo partnership, he played with Guido Ratter. In the same period, Gulli created even the Trio Italiano d'Archi with Bruno Giuranna, violinist, and Amedeo Baldovino, cellist (replaced in 1962 with Giacinto Caramia).
He usually used two violins, the Stradivari 1716, "Maréchal-Berthier, Vecsey" (already belonged to Franz von Vecsey), and the Stradivari 1702, "Conte de Fontana" (belonged to David Oistrakh). He died at Bloomington in 2001.

Albert Dietrich (b Forsthaus Golk, nr Meissen, 28 Aug 1829; d Berlin, 20 Nov 1908). German conductor and composer. He attended the Dresden Kreuzschule from 1842 to 1847, studying the piano and composition with Julius Otto. He then studied with Ignaz Moscheles, Julius Rietz and Moritz Hauptmann at the Leipzig Conservatory and attended lectures at the university. In 1851 he went to Düsseldorf, where he was taken into Schumann’s circle and became friendly with Brahms. In the autumn of 1853 he wrote the opening Allegro of the ‘F–A–E’ Violin Sonata (the other movements were composed by Brahms and Schumann) as a greeting for Joachim. Dietrich left Düsseldorf in 1854 and conducted the first performance of his Symphony in Leipzig on 9 December. He then worked in Bonn (1855–61), conducting the subscription concerts and acting as the city’s music director, and at Oldenburg (1861–90), where he was court Kapellmeister and took over the musical education of the grand duchess. In 1890 he retired to Berlin, where he had been a member of the Akademie der Künste from 1888; he received the title of royal professor in 1899.

As a conductor Dietrich championed primarily the works of Bach, Schumann and Brahms and had little sympathy for the music of the New German School. As a composer he was a follower of Schumann, and his works enjoyed a considerable reputation during his lifetime; perhaps his greatest success was as a songwriter. Both his operas were performed in his lifetime; his incidental music to Cymbeline was played in England at the Lyceum revival in 1896. He also wrote a collection of memoirs of Brahms (Erinnerungen an Johannes Brahms in Briefen, besonders aus seiner Jugendzeit, Leipzig, 1898, 2/1899/R), which was translated into English the year after it first appeared.

Richard Strauss (b Munich, 11 June 1864; d Garmisch-Partenkirchen, 8 Sept 1949). German composer and conductor. He emerged soon after the deaths of Wagner and Brahms as the most important living German composer. During an artistic career which spanned nearly eight decades, he composed in virtually all musical genres, but became best known for his tone poems (composed during the closing years of the 19th century) and his operas (from the early decades of the 20th). Coming of age as a composer at a time when the duality of bourgeois and artist had become increasingly problematic, Strauss negotiated the worlds of art and society with a remarkable combination of candour and irony. Averse to the metaphysics of Wagner and indifferent to Mahler's philosophical intentions in music, he exploited instead the paradoxes, inconsistencies and potential profundities to be found in modern, everyday life. The new possibilities he envisioned for music were exemplified in the eclecticism of the opera Der Rosenkavalier, whose juxtaposition of contemporary with intentionally anachronistic elements creates a stylistic pluralism that adumbrates subsequent experimentation of the later 20th century.