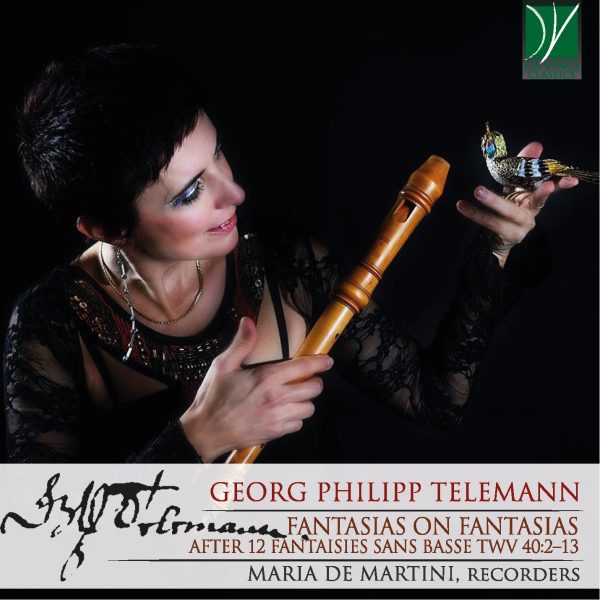 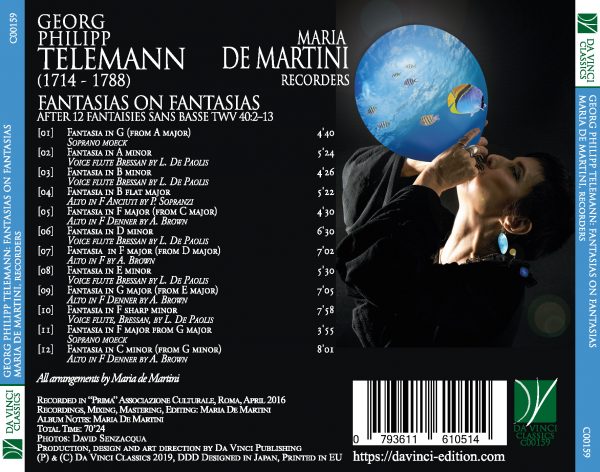 Mattheson’s subscript/couplet following Telemann’s autobiography reads: People sing the praises of Lully; they speak very highly of Corelli; Only Telemann is above all praise.

I was born on October 29th, 1965. My father, Mimmo, died just after I was born, bequeathing me an old MC on which he sang Brassens with his guitar and a deep, warm voice. My mother had nothing to envy to an actual opera singer, but she was terribly proud of her musical illiteracy. My grandmother Ida actually went to the Conservatory but devoted her life to the family. My Grandfather Franco escaped the Nazi concentration camps to the pace of Boogie Woogie... he improvised with two stiff hands that barely spanned the keyboard. On the long car journeys to Calabria, we all (managing not to throw up) sang loud songs of the Italian resistance, popular songs from all the regions of Italy, arias from Don Giovanni, Così fan tutte, Traviata, Elisir d'amore, canons, roman stornelli... but back at home, I couldn't wait to put on the Inti Illimanos record and play El Condor Pasa with my plastic flute. I lived in a musically stimulating environment but without the pressures of a musicians' children, who have to make music at all costs, and that's why I'm musically omnivorous and playful.
At the age of twelve, Louisa di Segni, the progenitor of the Dalcroze method in Italy, saved me from traditional solfeggio, and Pedro Memelsdorff, a child at that time but a formidable flautist already, made me love the recorder and the Telemann’s duets. One day, playing with my sister Anna, I confessed... I played by ear! She reassured me and showed me a basic trick for the musical reading that I still jealously attended: she told me that in essence the music first rises and then goes down. Meanwhile, at the Italian Ancient Music Center, Sergio Siminowich gathered a real army of young talents. I sang in the choir and played in the orchestra with joy and pride as a real amateur. In a few years, I learned a significant part of the baroque repertoire. To satisfy the bureaucracy, I took a diploma at the Royal College of Music in London and another at the Conservatoire Populaire de Musique Ancienne in Geneva. The meeting with Alessandro de Marchi opened up new creative horizons, and together with other colleagues, we founded the “Teatro Armonico”, an ensemble with which we rigorously performed only unpublished scores.
I started to do some concerts, playing with the Academia Montis Regalis (L. Mangiocavallo, T. Koopman, C. Banchini, B. Kuijken, A. Bjlsma, S. Balestracci, J. Savall), Concerto Italiano - R. Alessandrini, Le Concert des Nations - J. Savall, Wiener Akademie - M. Haselbock, Il Complesso Barocco - A. Curtis, La Risonanza - F. Bonizzoni, Ars Antiqua Austria - G. Letzbor, Europa Galante - F. Biondi, L'Astrée, Musica Antiqua de Toulon, Il Teatro Armonico - A. De Marchi, La Cappella della Pietà dei Turchini - T. Florio, Accademia Bizantina - O. Dantone, I Sonatori della Giosiosa Marca - G. Fava, I Barocchisti - D. Fasolis, Modo Antiquo - F. M. Sardelli.
But a sudden and uncontrollable desire to attend the lower frequencies of the orchestra brought me closer to the baroque bassoon and then, an equal desire pushed me to explore his recent history, armed with the classical bassoon, then romantic, and I arrived at Beethoven and Rossini.
I participated in tours throughout Europe and South America at the main concert institutions and the most important ancient music festivals. I am also President of the Cultural Association “RACCONTARCANTANDO” with which I carry out concerts, theatrical and pedagogical activities, as a flautist, bassoonist and director of musical theatre for children.
I founded and run my own theatrical space in Rome, which is called “Prima”, for concerts, shows and initiatives out of the ordinary.
Now I teach recorder and ensemble for ancient instruments at the L'Aquila Conservatory and the baroque bassoon at the Latina Conservatory.