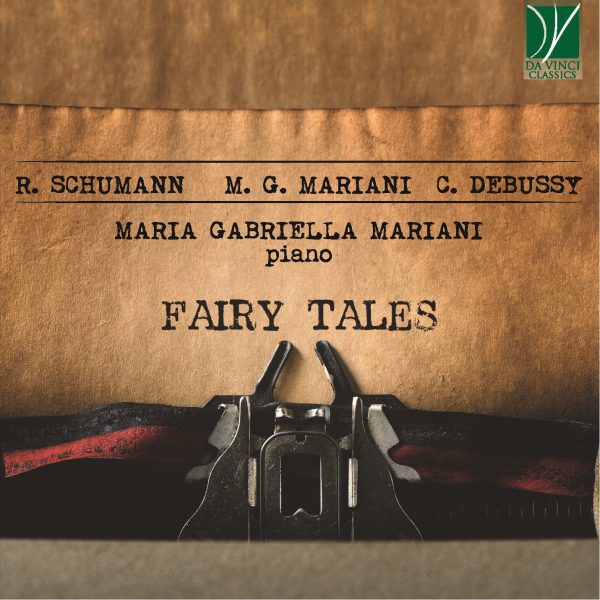 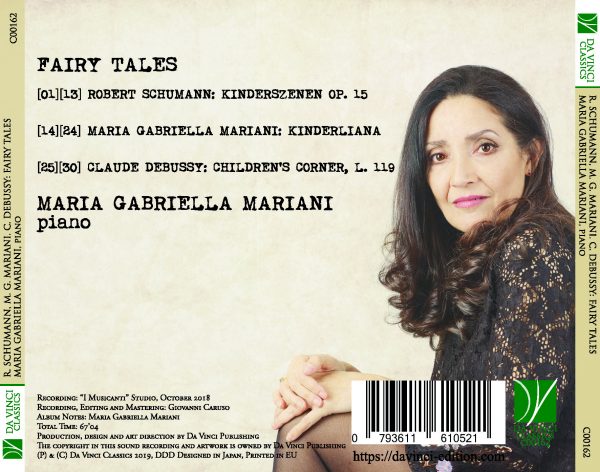 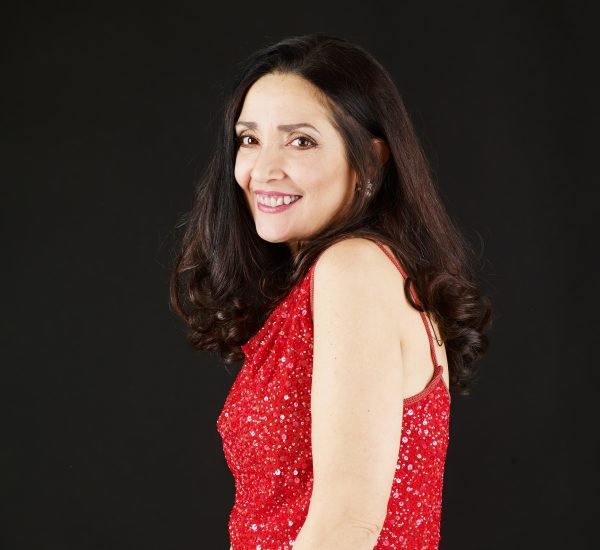 When I described this project to my publisher, he immediately proposed the title Fairy Tales. I accepted willingly, although I’m not particularly fond of titles in foreign languages, especially since ten years ago, when I presented my first work, Presences, some criticized the choice of English titles. Stories, fairy tales, “fantasy pieces” – as Schumann would have put it- are in fact the red thread of this Album, in which the compositions were chosen not merely for their use of similar extra-musical subjects, but instead due to their poetic consistency. The world of children is like a shelter, or even a way of living to be attained, at least for me. As possibly Schumann viewed it, this enchanted and fantastic dimension an exclusive domain of children: indeed my intention is to recover it as an adult and bestow it with awareness. If it is true that children really behold the power to be amazed, my path must turn towards the past, in quest of wonder: a wonder seen through lenses which unavoidably differ from those of childhood, different, and, in certain aspects, mythical.
Reading about the ideas and sources of inspiration behind Opus 15, I think I am rather close to the author’s intentions: in Kinderszenen Schumann did not stop at a musical portrait of his family, which, in 1838 he did not yet even have. I dare say that he would not have created such an insight on his domestic life, even if he had already had one. Scene d’Infanzia (Childhood Scenes) are more of an evocation rather than a description, in which the images suggested by the twelve titles become part of a larger romantic fictional world, in which childhood coincides with an auroral age, with an ideal world. The approach adopted by Debussy, who dedicated Children’s Corner to Chouchou, is much more realistic. More realistic because truly lived: most of the pieces refer to real atmospheres, or to objects actually owned by his daughter. The last work in the collection recalls and translates in a highly personal fashion the “Cake-walk”, a dance which was fashionable in Paris in the early 1900s. Since I have been inspired, in the composition of my Kinderliana, by a kaleidoscope of different approaches and references (some of which are more distinctly intimate and human, while others are more ironic), therefore I decided to include this possibly too well-known piano piece in the collection. My own compositional work is, at the same time, both musical and narrative, and the two are inextricably linked and connected. Like Schumann, I too wished to enter a world in which opinion and imagination could coexist; moreover, I composed this work in parallel with a collection of stories with the same titles, except for Introduction, Memento and Conclusion. Thus, behind each piece there is a story; for this reason, rather than scenes, I would say that each composition features a character, protagonists of their own stories: the dancer, the knight, the animated doll, the parrot.
Just like Schumann, I imagined a stage on which the characters (puppets), bring their stories to the public’s attention. Therefore, on the occasion of a mise en scène of Kinderliana that I worked on, my vision became a reality: young actors were the protagonists of the stories and their presence on stage framed the musical performance. Kinderliana opens with fantastic and imaginative stories and is slowly enriched with increasingly tragic and human content. As I realized that the tragic elements were taking over the more playful and ineffable ones, I started to worry. But then I thought: fairy tales, just like the main characters of the stories, Dora and Lucia, grow up; the most heartbreaking and inexplicable truths are often hidden behind most stories. In fact, both the tales and the musical collection are addressed not only to a young audience. Rather, their message can be seen under various lights; it can be understood by adults who have rediscovered a child’s innocent worldview and managed to transform human tragedies in a kind of surreal catharsis. Magic does not come only from the spells of fairies, but rather from the miracle of the human soul, young or old; this I address through Fairy Tales, aiming at moving and inspiring it. These notes are not intended as a technical-stylistic analysis of the compositions I presented above: in my view, neither Schumann’s Opus 15 nor Debussy’s anthology are in need of introductions or commentaries. Moreover, it is not easy for me to write about my compositions. Instead, I thought that I should explain my choice of creating a large story with many characters, both real and invented, from Chouchou to Dora and Lucia, from the attention-seeking child to the one who does not want to sleep, from a knight made of clay to one on a rocking horse, up to the dancer or the little Alin. All have their own individual part of the story to tell on the great stage of life. The audience, comfortably seated on their chairs, are free to experiment empathizing with all characters, perhaps remembering childhood or reflecting on the many evils of life that only fairy tales can sublimate in a wonderfully disturbing way.

Maria Gabriella Mariani, Pianist: “I have two languages and many languages.” It is in this way that Maria Gabriella Mariani defines herself, and in fact music always and narrative writing since several years, are two sides of the same coin for her. Martha Argerich appreciates her musical nature: “An extremely interesting talent; sure, imaginative, very artistic, her way of playing is so varied, it is never predictable […], I love her Scarbo […] Her improvisations are extraordinary”, in which she has been experimenting since childhood. Her piano origins belong to the Neapolitan school of Vincenzo Vitale, although she soon distanced herself not so much from the school of Vitale, but from the concept of school in general. She studied with Aldo Ciccolini in Italy and in Paris and graduated with the “Excellent” judgment from the “Lorenzo Perosi” International Academy in Biella. She studied chamber music with Trio di Trieste, although she preferred to play solo. At the age of 14 she made her debut at the Rimini “Aterforum”, receiving significant reviews in newspapers from the most important Italian critics; a few years later she obtained a scholarship in Paris for having won the Lucca piano competition entitled to Liszt and subsequently received a Prize of the Senate of the Italian Republic. She was first classified in numerous national and international competitions. Among her musical works and CDs, presented throughout Italy, among others, A. Barizza, N. Cattò, L. Ciammarughi, G.P. Minardi L. Segalla, S. Valanzuolo, L.Valente, A. Zignani, took care of them and the Neapolitan musicologist composer and director Roberto De Simone who, in 2014, devotes to her an essay focused on the possible ways of composing today, where he states that "the music of Maria Gabriella Mariani could declare the possibility of today's creativity”. As a soloist she played for prestigious concert associations and theaters throughout Italy and abroad. Graduated in Literature, she wrote a thesis on Schumann entitled Schumann. Thought and fantasy and published scientific writings of music and literature and arts in collaboration with several Italian universities. Recently she was awarded in the USA with 4 Global Music Awards, as well as a composer, as an interpreter of French music, (Ravel Gaspard de la nuit) and of her piano works. Her works have received public and critical consent. Even Ciccolini, after listening to some of her music, expressed himself: “Her music reveals an very impressive creative sense, supported by exceptional piano-player skills and assisted by a complete mastery of the keyboard and by a search of tone-colour that is more unique than rare”