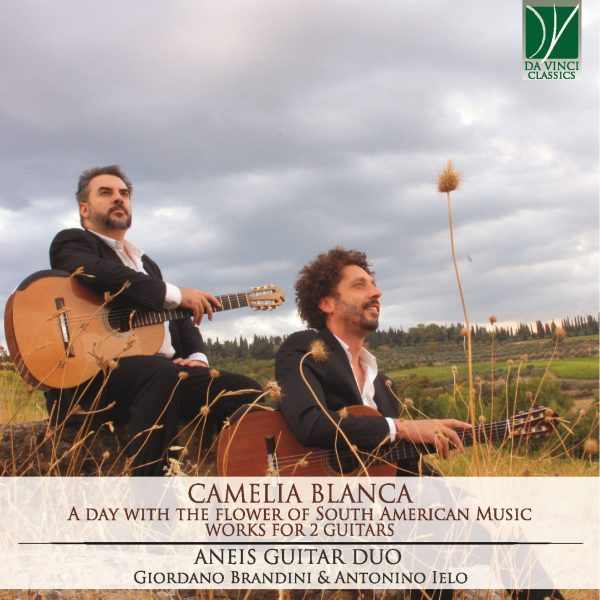 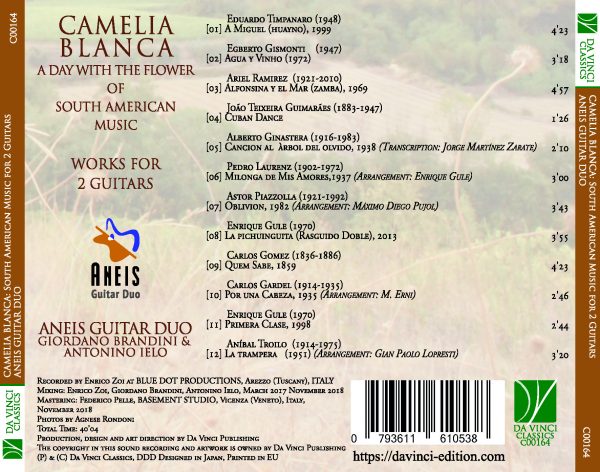 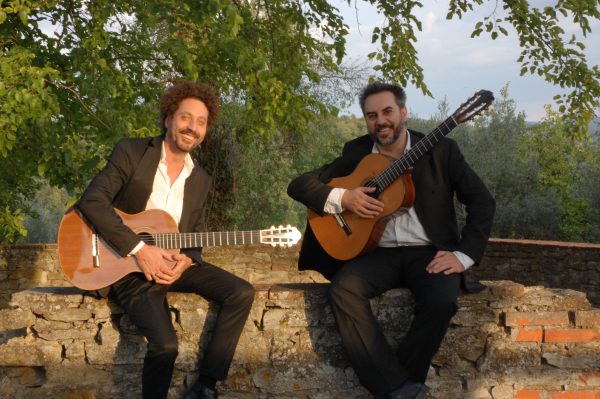 Camelia Blanca: A day with the flower of South American Music

Antonino Ielo and Giordano Brandini, both natives of Arezzo, met in 2007 during their studies at the Cosenza Conservatory (Calabria, Italy) in the guitar class of Giorgio Albiani and became the Aneis Guitar Duo in 2014, after various experiences in different ensembles and as soloists. The sounds, colours and suggestive atmospheres of the music in Latin America spawned this musical union (the term “Aneis” in the Portuguese means “Rings”), and this first CD may be considered as a project of thanks. Source of inspiration was a verse by Federico Garcia Lorca from Poema de la siguiriya gitana “Arena del Sur caliente que pide camelias blancas” [“Hot southern sands yearning for white camellias”]. This flower has the fragrance and flavours of South America, a crossroads of peoples, cultures and nations that constantly recalls that “Sur Caliente”, its sensual and moving liveliness. Moreover, in flower language, offering a white camellia means esteem and admiration. In light of these reasons, the title was chosen. As a flower life, a short journey from the soulful sound of “Agua y Vinho” to the emotional song of “Alfonsina Y el Mar”, dedicated to the Argentine poet Alfonsina Storni, who lost her life in the waves of the sea. From the sweet “Quem Sabe” where the eternal poetic theme of love, with its sufferings, speaks to the human heart to the in the intense “Canción del árbol del olvido” where the fatal wound of heartbreak shreds the soul. Sound that only a “llanto de una guitarra” [the cry of a guitar] can magnify. The music move onward and reaches the dance, from the most famous tangos and milongas like “Primera Clase”, “Oblivion”, “La Trampera” and “Milonga de mis Amores” and the Caribbean crisp of “Cuban Dance” to the huayno folklore and rasguido doble of “A Miguel” and “La Pichunguita”. Trait d’union is the tango-song “Por una cabeza”, widely used as a musical theme in many successful movies. It is the expression and synthesis of constant feelings such as melancholy, nostalgia, sensuality, passion, impetuosity.

Antonino Ielo: Born in Reggio Calabria, he began studying modern guitar at the age of 13 with Vincenzo Baldessarro. He then began studying classical guitar with Francesco Pepè and Adriano Walter Rullo. Master’s degree in Musical Interpretation with the highest marks under the guidance of Giorgio Albiani at the Cesena Conservatory. He participated in national and international master classes with Alberto Ponce (Ecole Normal de Paris), Angelo Gilardino, Piero Bonaguri, Oscar Ghiglia, Lorenzo Micheli, Matteo Mela, Aniello Desiderio, Giampaolo Bandini, Luis Quintero, Maurizio Norrito, Johan Fostier, Luc Vander Borght, and obtained excellent placings in national and international competitions. As part of the Erasmus project, he carried out teaching at the "Manuel Castillo" Conservatorio Superior De Musica in Seville (Spain), under the guidance of Francisco Bernier. He has been a member of the "Ensemble Macramè" with whom he has performed regularly on various occasions and concert seasons, such as "Concerts at San Donato-A.Gi.Mus Florence, 2011" and the Festival "I mondi della chitarra 2012" (Cesena), "Le nuits musical de Ciuex”. He recently won the 2015 chamber music competition dedicated to the guitarist Davide Lufrano Chavez, organized by the "G. Verdi" school from Prato. Graduated in Musical Disciplines with a Technological Address at the "F. Cilea", in 2006 he received a three-year degree in Telecommunications Engineering. In June 2016 he obtained the DSPM Diplome Superieur de Perfectiontionment Musical (DSPM) at the "Ranieri III" Academy of Monaco - Montecarlo (Principality of Monaco) under the guidance of Maestro Luc Vander Borght.

Giordano Brandini: He obtained the Classical Guitar Diploma at the Conservatory "S.Giacomantonio" of Cosenza and then the Degree in the second level biennium with 110/110 cum laude at the Conservatory "B. Maderna "of Cesena under the guidance of M° Giorgio Albiani. He attended high-level courses taught by: A. Ponce, A. Barricelli, L. Boutros, J. Garcia Moreno, A. Scuderi, L. Quintero, O. Pelmoine, A. Fruscella, O. Cyrulnik, L. Vander Borght and others. In Rondine Cittadella della Pace he participated actively in various types of Stages: from the Neapolitan Tarantelle with Silvio Trotta and Nando Citarella, to the African rhythms of Burkina Faso with Paul and Gabin Dabiré, from Breton music with the Skolvan to that of the Manouche nomads in the footsteps of Django Reinarth. From 2007 to 2011 he collaborated with the Cooperative Society Oros and the Mountain Community of Casentino on behalf of which he led, at the ecomuseum of Music of Talla, musical animation workshops aimed at nursery and primary schools in the province. The concert activity led him to perform in reality as the Dovizi Theater in Bibbiena, the Auditorium "Parco della Musica" in Rome, the Auditorium of Scandicci for the season "Vito Frazzi", the Chitarrissima Festival in Saluzzo and more. He also performed concerts as a member of the Ensemble Macramé, a formation that has performed at Cà de Frati for the Ass. Arezzo city of Vasari, Villa Demidoff and Villa Bivigliano for the Ass. Musicae Firenze, and on the occasion of the Pievi and Castelli music event.

Alberto Ginastera (b Buenos Aires, 11 April 1916; dGeneva, 25 June 1983). Argentine composer. His original creative achievement established his position as one of the leading 20th-century composers of the Americas.

Aníbal Troilo (b Buenos Aires, 11 July 1914; d Buenos Aires, 18 May 1975). Argentine tango bandoneon player, bandleader and composer. Largely self-taught, he played full-time in tango bands from the age of 13, working in those of Juan Maglio, the Vardaro-Pugliese Sextet, Julio De Caro and Alfredo Gobbi among others. His own band made its début at the Marabú cabaret in Buenos Aires in July 1937. With Troilo’s bandoneon and the piano skills of Orlando Goñi, it was soon recognized as the leading band of its time; the first of its nearly 500 recordings date from 1938. Supremely popular in Buenos Aires, Troilo made relatively few trips abroad, which were always short. His best tango songs were written with the lyricist Homero Manzi, and include Barrio de tango and Sur, the prime tango classics of the 1940s. In 1953 he wrote music for a long-running musical comedy, El patio de la morocha, and he and his musicians appeared in eight Argentine films. From the 1950s to the end of his life Troilo also worked with excellent smaller groups, the Troilo-Grela Quartet (with guitarrist Roberto Grela) and his own Aníbal Troilo Quartet. The records he made with these groups, especially the album Troilo-Grela (1963), display magnificently his bandoneon technique, above all his astonishing sensitivity and his equal skill with both hands. Troilo’s affection for strenuous night life and his taste for whisky gradually undermined his health, but he never lost his status as a popular idol, shown in the public grief occasioned by his death.

(b ?Toulouse, Dec 1890; d Medellín, 24 June 1935). Argentine composer and tango singer. Although Gardel's origins have been widely debated, he was probably born in Toulouse in 1890; in 1893 he and his mother emigrated to Buenos Aires. Together with the Uruguayan singer José Razzano, he formed a duo in 1911, which lasted until 1925. About 1917 Gardel performed and recorded Samuel Castriota's popular tango tune Lita, under the title Mi noche triste (to words by Pascual Contursi). By the early 1920s he was firmly established as Argentina's leading tango singer, and several successful European tours followed. He was killed in a plane crash in 1935.

Gardel's chief contribution was to popularize the sung tango, although both his career and songs were criticized by some as lacking a critical, political thrust. In addition to recording almost 900 songs, he appeared in several classic films; his best-known compositions include El día que me quieras, Mi Buenos Aires querido, Por una cabeza, Volver, Silencio and Cuesta abajo. Gardel's impact was profound: a product of the arrabal (districts) who came to symbolize the fulfilment of the dreams of the Argentine porteño (from the port, i.e. Buenos Aires), he remains a crucial figure, ‘the tango made flesh’ as described by the singer Libertad Lamarque.

(b Campinas, 11 July 1836; d Belém, 16 Sept 1896). Brazilian composer. He was the son of a provincial bandmaster, from whom he learnt the rudiments of music and to play several instruments. He began composing at an early age and at 18 wrote a mass that was performed in a local church by the Gomes family ensemble. In 1859 he went on a concert tour with his brother Sant’Ana Gomes and had considerable success with his Hino acadêmico in São Paulo. He then left for Rio de Janeiro against his father’s will and entered the Imperial Conservatory of Music, where he studied composition under Joaquim Giannini.

Egberto Gismonti: (b Carmo, 5 Dec 1947). Brazilian composer. He began piano studies at the age of six at the Nova Friburgo Conservatory, studying classical music for 15 years. He moved to Rio de Janeiro in 1968, where he successfully participated in the Third Rio International Song Festival. He then went to Paris to study orchestration and analysis with Nadia Boulanger and composition with Jean Barraqué. After his return to Brazil, Gismonti developed a personal style incorporating Arabian and Italian melodies (his family’s heritage), classical and contemporary music (especially Villa-Lobos and Stravinsky), traditional national genres (folklore, choro, bossa nova), Brazilian Indian themes and jazz. Influenced by the choro, Gismonti taught himself to play the guitar. He has played, recorded and toured throughout the world with several musicians. Since his first recording in 1969 he has made about 50 albums of his own compositions (most released by ECM Records and EMI-Brazil), in which he plays the piano, guitar, various flutes (including Indian instruments), kalimbas and other instruments, winning several prizes. He has also worked as a producer, arranger or player in several other musicians’ recordings. Gismonti’s compositions encompass a great diversity of musical elements and forms, both Brazilian and international, and have been written for solo instruments, ensembles, symphony orchestras, dance, theatre, films, exhibitions and poetic anthologies.