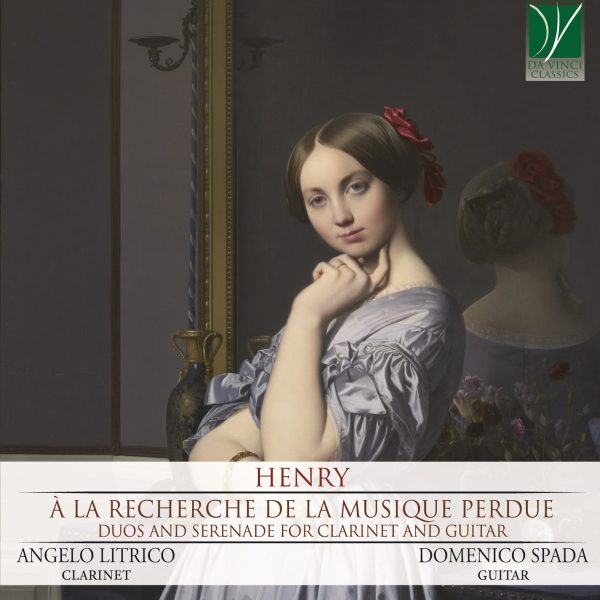 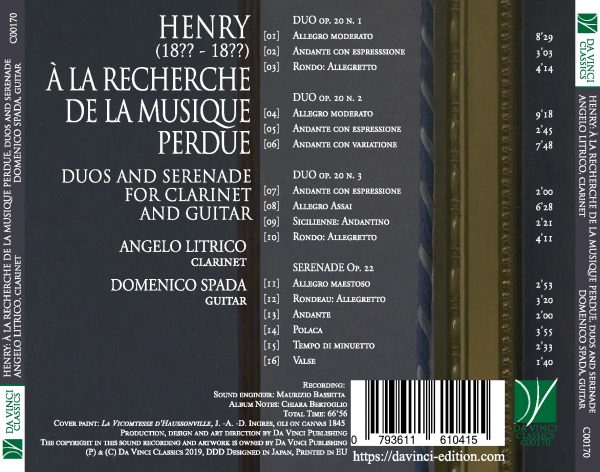 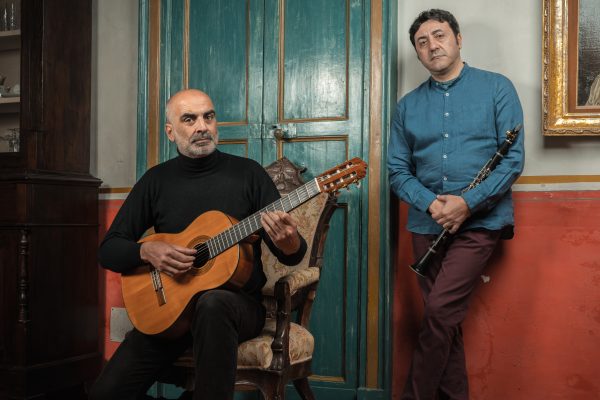 It is a well-known pleasure for music lovers to discover hidden treasures; and it frequently happens that forgotten gems are found even within the output of well-known composers. But when the composer himself (or, intriguingly, herself..?) is in turn virtually unknown, then the adventure becomes even more attractive.

This is undoubtedly the case with the Henry who wrote the works in this Da Vinci CD, whose first name was unknown even to the compiler of the only biographical notice we have about him. (It is more likely that Henry was a man than a woman, since the clarinet was not among the instruments most frequently played by females at the time).

Contemporary research, in fact, could not go beyond the few lines we find in François-Joseph Fétis’ Biographie universelle des musiciens; indeed, the entries on “Henry” found in the most updated modern encyclopaedias express doubts on even the scanty facts given as likely by Fétis. In fact, Fétis ventures the hypothesis that our Henry might have been the son of Bonaventure Henry, a much better-known musician who lived in Paris between eighteenth and nineteenth century. Bonaventure taught violin, and acquired long-lasting fame for his talents as a pedagogue; his methods for violin were long recommended by famous performers as a formidable training for overcoming technical difficulties. Bonaventure had also a lively activity as a performer; his debut at the famous Concerts Spirituels (a series of concerts focusing on religious music) took place in 1780, when performed a Concerto composed by himself; later he was given a job as first violin at the Theatre Beaujolais, where he was still active in 1791. It is also possible that he was an entrepreneur in the field of musical publishing, since some works by one of the sons of J. S. Bach was published by “Henry” at the turn of the century. It has been hypothesized, moreover, that Bonaventure had a rather large and musical family, as several musicians with that family name and a suitable age were active in the early 1800s in Paris, among which one “citizen Henry” who is remembered as a female singer in the chronicles of the time.

In view of this information, Fétis’ belief that Henry the clarinettist might have been in turn one of the children of Bonaventure seems not to be too far-fetched, though no supporting information could be found. The halo of mystery surrounding the author of the works presented in this CD is increased by the fact that they are duos for clarinet and guitar. At the Bibliothèque Nationale of Paris, in fact, a certain number of solo and chamber music works for and with guitar are found under the family name of Henry, among which songs for voice and guitar, a method for guitar in thirty lessons and a collection of easy fantasies for solo guitar. The composer of these works is listed as “Professor of guitar”, as the pedagogical orientation of some of his output seems to confirm and to suggest; and since the opus number of the Mes fantaisies (op. 19) immediately precedes that of the Duos recorded in this CD, it seems likely that the same person authored both. On the other hand, however, Fétis’ record specifies that the author of the Duos was a clarinet player, and that he was so proficient in the technique of that instrument that he wrote solo Etudes and Caprices.

While the hypothesis that a single musician was extremely skilled in both instruments cannot be discarded, the very fact that the Duos recorded here feature both the clarinet and the guitar seems to suggest that two musicians, one playing the clarinet and one the guitar, may have been active at the same time and were likely related to each other as siblings. What is certain is that the amiable, delightful and gentle style of these works underpins the role of chamber music as an instrument and as a symbol for educated, cultivated and refined human relationships, mediated by music.

This musical dialogue between two very different instruments was so successfully realized in Henry’s music that an alternative version, for flute and guitar, was also published: the flute was a wind instrument more commonly played than the clarinet at the time, and therefore the potential audience of these Duos was substantially increased. Indeed, the original repertoire for clarinet and guitar duo is remarkably limited: this fact is hard to justify if one considers the particular beauty and fascinating blend that this instrumental combination offers, as is clearly demonstrated by the works in this CD.

The original choice of the clarinet as the chamber music partner of the guitar is however singularly fascinating and intriguing, though it is fully justified by the atmosphere of the time. In those years, in fact, Paris was becoming a major centre for the development of the instrument, which had been created approximately a century earlier in Germany and had been offered its first absolute masterpieces from the pen of Mozart at the end of the eighteenth century. A few years later, around 1810, an Estonian-born clarinet player and composer, Ivan Müller, arrived in Paris, and brought with him important technical innovations, which permitted to close more effectively the holes of the instrument and to realize an alto clarinet in E-flat. Two years later, in 1812, the same Müller further perfected his improvements, so that it became possible to perform the entire chromatic scale on a single instrument: the clarinet, thus, could play pieces in any key, whereas previously it was necessary to shift instrument for works in different keys. Sadly, however, the epoch-making revolution of Müller’s genius was initially not accepted at the Paris Conservatoire, as it was argued that the many instruments hitherto necessary for playing in the various keys possessed distinguishing, valuable and individual timbral qualities which should not be sacrificed in the name of practicality.

Notwithstanding this, the Paris Conservatoire would later impose itself as one of the poles for the exploration of new technical innovations and of their applications to musical performance and composition; in 1844, for example, it was the professor of clarinet at the Conservatoire, Hyacinthe Klosé, a famous performer and pedagogue, who first adopted the recently created Boehm system and contributed therefore to its success worldwide.

In the years when Henry was reportedly active in Paris, as maintained in Fétis’ Dictionnaire, then, the clarinet was under the spotlight for the new possibilities it offered. It is very significant, therefore, that a performing musician such as Henry was alert to these news opportunities and contributed generously to the repertoire for both entertainment purposes and the technical education of younger players.

The singing potential of the clarinet is fully exploited in these pieces, where melodic lines clearly influenced by the operatic style in their shape and structure are continuously interwoven with more virtuosic passages – in turn indebted to bel canto coloraturas. While the guitar frequently is in charge of the harmonic support, it is by no means confined to it, and it often enters into contrapuntal dialogue with the clarinet, thus providing these works with noticeable variety of style and creative ideas.

Although it is to be regretted, therefore, that the figure of the composer eludes so profoundly our knowledge, it is a pleasure that at least his music has survived, and that these delightful tunes and carefully crafted compositions are available for the enjoyment and cultural enrichment of today’s listeners.

Angelo Litrico: Clarinet player, teacher and researcher, Angelo Litrico ha based his musical experience mainly in the field of classical music with a repertoire ranging from later baroque to the beginning of the twentieth century.
Born in Catania (Italy) he graduated there in clarinet at the Istituto Musicale Vincenzo Bellini and after his diploma, he perfected his studies in Palermo with Vittorio Luna. In 2001 he met in Paris the clarinet player and woodwind maker Gilles Thomé who introduce him to the study of historical clarinet, practice that he developed in Holland with Eric Hoeprich at the Koninklijke Conservatorium.
He has played in different countries for institutions such as: Gelderse muziekzomer Festival, C.N.S.M. Paris, Musica Antiqua Brugge, Amici della Musica, Robeco Zomer Concerten, Van Vlaanderen Festival, Musicales Guil-Durance. He also got the first prize in several Chamber music competitions.
A follower of historical informed practice, he has devoted himself to the research of the repertoire of his instrument and to the history and development of the single reed, knowledge that he shared in several seminars and master classes held at various Italian and foreign high schools of music.
With the support of the French wind instrument maker Olivier Cottet, he started an atelier in Catania in 2018 where he makes copies of clarinets from the 17th and 18th centuries.
He is clarinet professor in a junior high school for music since 2003 and he is the editor of a series of chamber music books for wind instrument published by Edizioni Novecento.

Domenico Spada: Born in Catania in 1961, he began playing guitar as a child. He always privileged in his exhibitions the original guitar repertoire and ensemble music. Winner of many guitar competitions, he graduated from the conservatory "F. Torrefranca" of Vibo Valentia. He has performed for relevant musical associations such as G.M.I., S.I.E.M., A.M.I., A.GI.MUS., C.I.M.S., Lyceum, Ass. G. Javicoli (Rome), Ass. Mus. Etnea. He has performed both as a soloist and in various chamber ensembles (Duo and trio with guitar, duo with piano, duo with flute, singers, string quartets and orchestra). From 1986 to 1992, he attended an international course, named "Città di Sapri" for advanced guitarists under the guidance of Maestro Angelo Ferraro. He also attended, as a triennial student, a course of high specialization at the "Music Academy of Pescara" under the guidance of Maestro Angelo Ferraro. In the summer of '90 he toured in Mexico City performing for the major musical institutions, such as: "Escuela Nacional de Musica", "U.N.A.M.", Orchestra of the "Instituto Politecnico Nacional", playing the "Concerto Op. 99 in D" of M. Castelnuovo-Tedesco under the direction of S. Carballeda. In 1991 he performed Concerto Breve" by F. Margola, invited by the "Youth Orchestra of Campania. In 1994 he toured France with the "Croche double Croche" Association, playing F. Sor's works in a guitar duo. In 1995 he was called by the "U.N.A.M." (University of Mexico) to teach in a specialization course for the students of the local musical school. Since 1994 he also started to work as a lutist. He has published a book on guitar making (Edizioni Novecento) in which he illustrates his constructive method. He plays with an instrument made by himself in 1996.