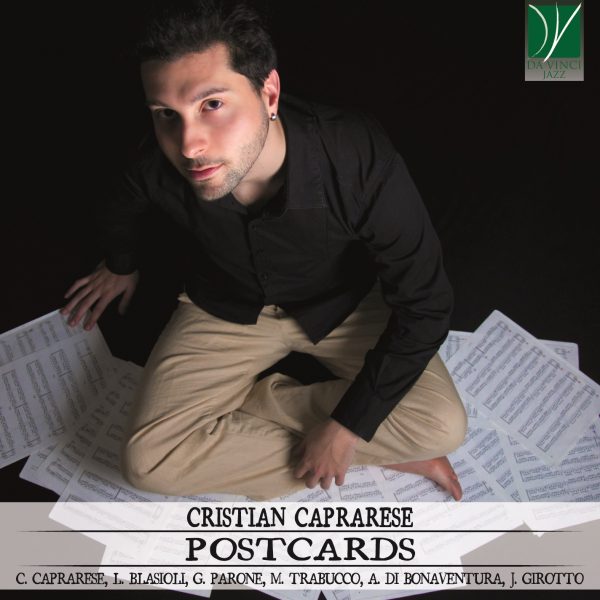 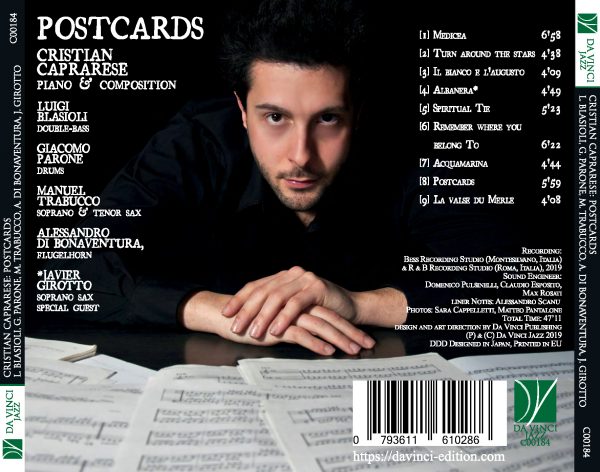 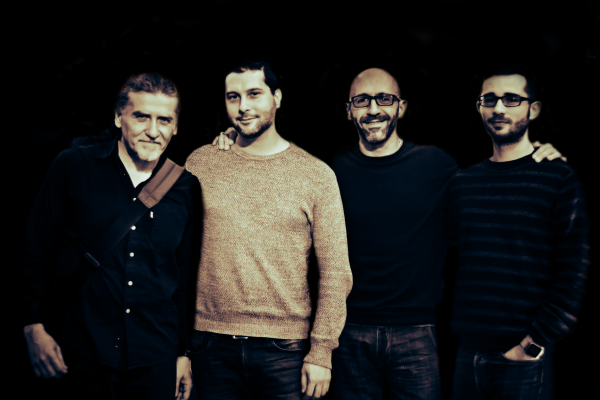 Listening to “Postcards”, the debut album of pianist and composer Cristian Caprarese, leads the hearer into a consistent and personal universe, full of surprises. “Postcards” reminds one of those old neighbourhoods by the sea, where the alleys all look alike, and where even those who were born there get lost, but where, behind every corner, glimpses of a wonderfully stunning landscape are hidden. This CD is veined by a longing to travel and explore, with occasional hints of nostalgia.
A wiser writer then myself has defined nostalgia as “the discount store of emotions”, yet it is necessary to distinguish among the different ideas of nostalgia. Fortunately, there still exists real wistfulness expressing, with intellectual honesty and simplicity, one of the many human ways of being in the world. One possible example of this is found in the circularity of “Turn around the stars” (one of the most beautiful among the album’s nine original compositions), or in the eponymous piece, “Postcards,” with its broad, but flowing, theme played on the flugelhorn by Alessandro Di Bonaventura.
This piece is entirely about the real postcards which the listener receives, with their full emotional load, ranging from the trepidation and wonder of discovery to the need to reconcile oneself with one’s past. All of the songs remind us of the Mediterranean musical tradition, imbued with jazz as well as with popular features; however, I want to state clearly that the value of this CD is not simply due to the aforementioned tradition, but rather to the quality of Caprarese’s musical style. Their modern sound is due to his brilliant and sensitive use of harmony and of the piano riffs, which add a touch of rhythm so that listeners can abandon themselves to the music with rapture and pleasure. The piano integrates itself so beautifully with the rhythmic section—Luigi Blasioli on double bass and Giacomo Parone on drums—that the trio sounds like a single instrument, creating a complex rhythmical texture with the wind instruments—Javier Girotto and the excellent Manuel Trabucco playing saxophone, Alessandro Di Bonaventura at the flugelhorn.
Writing about music is never easy. One is almost always forced to be indirect and obscure, or, on the contrary, self-referential, and the risk of slipping into slovenliness lurks behind every metaphor. However, in the case of this CD, the task was easier than usual, since its pieces are immediate and “unceremonious”. The music of Cristian Caprarese is like a friend you have always known, but who is always refreshingly surprising.