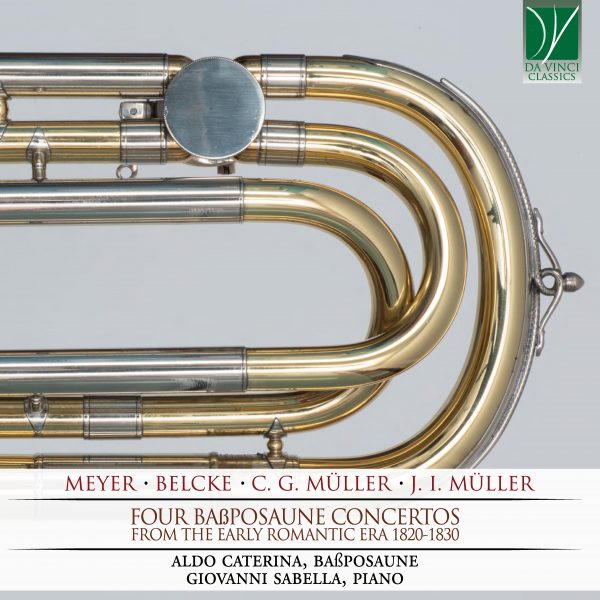 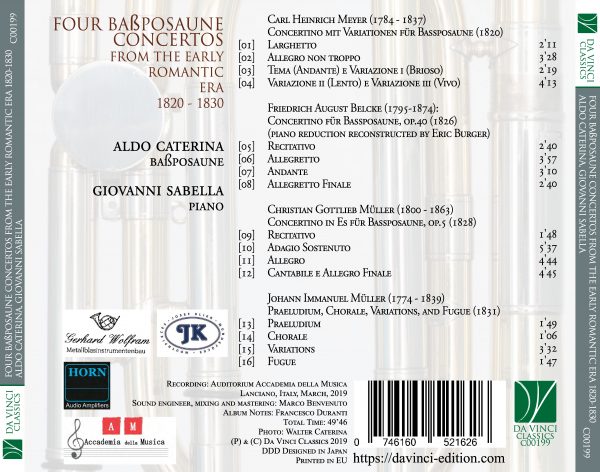 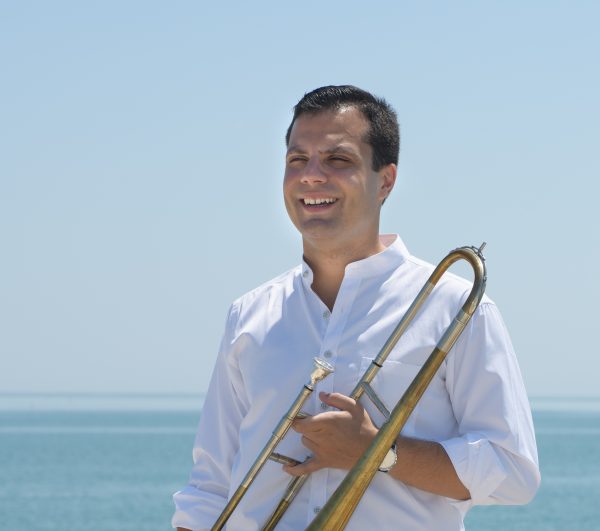 In the European music scene of the early XIX century we are witnessing the peak of the virtuosi phenomenon. Heirs of the arte del porgere of the late XVIII century, they embody the heroic spirit of the new romantic aesthetics. They left the courts, travelling around Europe, from a concert hall to another, enchanting the audience; they became the new heroes of the paying public. Most of us would remember musical wonders like Paganini or Liszt, who are legends still today. Very few, if nobody, will remember the very first trombone virtuosi. At that time, the trombone resurrected from the XVIII century oblivion and became a regular member of the orchestra. Initially, the audience just regarded trombone solo playing with curiosity; however, thanks to the work of great musicians, its value of virtuoso was soon recognized. In the German area, two of these musicians contributed with their skills to the writing of the first concertos and to the later development of the instrument, namely Friedrich August Belcke (1795-1874) and Carl Traugott Quisser (1800-1846). At the beginning, Belcke was trombone player in the Leipzig Gewandhaus Orchestra, where he made his debut as a soloist in 1815; after that, he spent the rest of his career in Berlin. With his precision, clarity and neatness of sound and technique he was able to amaze the audience and to get noticed by great composers like Mendelssohn and Schumann, with whom he also made friends. Belcke also promoted, and possibly even inspired, an invention by the brasswind maker Christian Friedrich Sattler (1839), i.e. the F-attachment. Basically, the new instrument was a Bb tenor trombone featuring a (compared to that time standards) very wide bore and the introduction of a valve activated by the left thumb of the player, which lowered the general pitch to the F of the bass trombone. This novelty allowed reaching the lower register of the bass trombone, although it was not intended to substitute it, as many believe nowadays. The F-attachment added new positions enabling a series of passages, combinations and technicalities that were unconceivable up to that point. Belcke’s refined playing technique together with such a new instrument thus amplified the trombone extension up to four octaves and beyond. Another name strictly related to Belcke was Queisser, who played with him at the Leipzig Gewandhaus Orchestra for a short time. Queisser was noted not only for his technical skills equaling Belcke’s ones, but especially for the vocal qualities of his sound. He adopted the new trombone with F-attachment almost immediately. His virtuosic qualities inspired the later German trombone repertoire and, in turn, also the repertoire of the other worldwide known trombone center, i.e. Paris. Praeludium, Chorale Variations, and Fugue for trombone and piano and the three Concertini for trombone and orchestra (presented here in the reduction for piano) are the very early examples of literature conceived for the new instrument, inspired by and written both by and for these key figures in the history of trombone.

Aldo Caterina, obtained bachelor and a master's degree in trombone at the Conservatory of Music G.B. Pergolesi in Fermo (Italy) with full marks and honors. He attended the course of High Specialization in Chamber Music in the class of Maestro Bruno Canino at the School of Music in Fiesole, Firenze (Italy). He also graduated in Philosophy at the University of Macerata (Italy). In November 2017 won the second prize in the solist category and Best Italian Musician Prize in the Virtuoso Prize International Competition, at the Auditorium Parco della Musica in Rome. After this recognition, the composer Davide Summaria dedicated him the composition Dialogo per trombone e pianoforte. In 2018 and 2014 he was guest trombonist in the European Tourneé of Standford University Orchestra direct by Giancarlo Aquilanti.
He published for the editor Il Castello of Foggia (Italy) the book Il trombone: la storia, il funzionamento, i modelli. Aldo Caterina collaborates with the Historical Publishing House Tito Belati of Perugia (Italy) in enhancing and reproducing in musical performances historic trombones produced by the Tito Belati Factory in the first half of the '900.
After having perfected himself in Germany, he has focused his attention on the original solo romantic repertoire for German trombone, offering public performances in concerts with original instruments or copies of the romantic era. For the manufacture of German romantic trombones he collaborates with the artisans Gerhard Wolfram and Karl Ernst Mönnich of Marckneukirchen (Germany).

GIOVANNI SABELLA is a pianist, conductor and composer. He wrote stage music for Teatro Stabile d'Abruzzo of L'Aquila (Italy). His last experience as a pianist gave him the opportunity to hold a concert at the Yamaha Music School in Bangkok (Thailand) and to hold a seminar on the poetry of Debussy at the Assumption University in the same city.