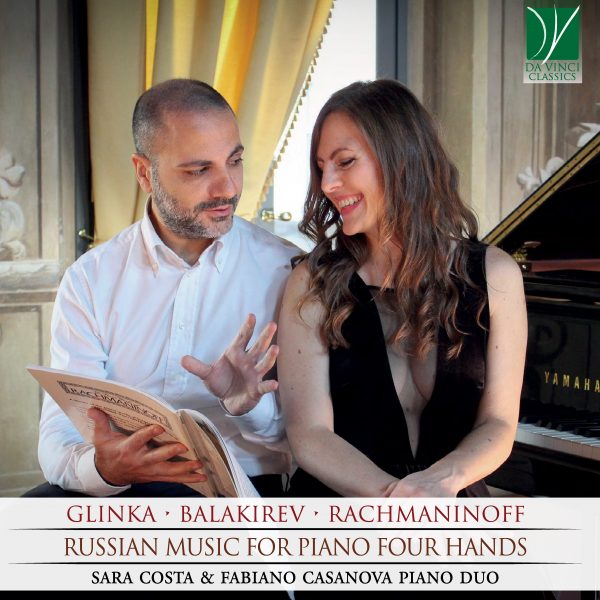 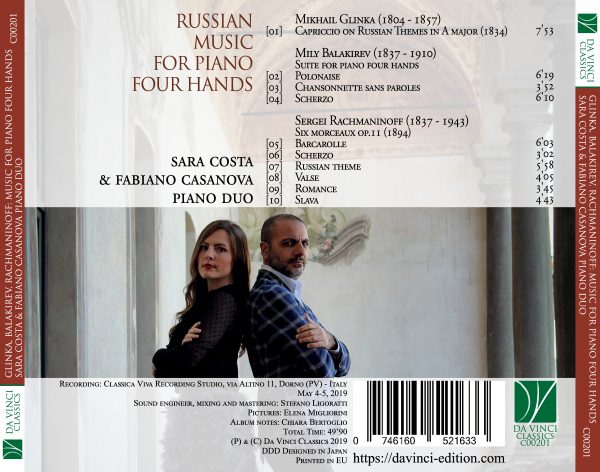 Fabiano Casanova: "A great talent with a strong artistic and magneticpersonality through which he can deeply communicate his extraordinary passion and his rich inner life."
So the Russian composer R.Shchedrin defines the pianist Fabiano Casanova after his playing of some of his compositions.
His concert career takes him to play as a soloist in Italy and abroad, playing for major concert societies and in important halls such as: " Società dei Concerti" in Milan”, Concert Season of the Symphony Orchestra of Rome , "Società del Quartetto" in Bergamo , Chamber Season of " Teatro Dal Verme " in Milan, Kolarac Foundation Hall of Belgrade, Rohm Music Foundation Hall of Kyoto, Fukuoka Airef Hall, Seymour Theatre Centre in Sydney, Grünewaldsalen in Stockholm, Saint Martin in the Fields in London, just to name a few.
His repertoire ranges from baroque to the contemporary pages of C.Vine, G.Ligeti and R.Shchedrin.
As a soloist, he performed with Orchestra Sinfonica of Roma and Roma Tre Orchestra.
Chamber music has a very important role in his concert activity: he's shared the stages with leading musicians like Boris Baraz, Igor Volochine, Alexander Chaushian and Diemut Poppen.
Charismatic and refined Piano Professor, he's often invited to give masterclasses in Italy and abroad, and as juror in many competitions.

With flair and passion, Italian pianist Sara Costa walks on international stages, playing as soloist and chamber musician. Her vast repertoire spans from Bach to Kurtag.
In Italy she’s a regular guest artists in the main Festivals and Concert Institutions of the country. She performed in Rome for “I Concerti del Quirinale” live on Radio3 and at Auditorium Parco della Musica, in Sala Puccini (Milan) for “Società dei Concerti”, at Fazioli Concert Hall in Sacile, at Teatro Donizetti and Sala Piatti in Bergamo, just to name a few. Abroad, Sara has performed in Europe, China, Japan and Israel. Among the others, in Europe Sara has played at Royal Albert Hall and Saint Martin-in-the-fields in London, at Hr Sendesaal in Frankfurt, at Grunewaldsalen in Stockolm, at Huqyaldy Festival (Czech Republic), at Zagreb Concert Hall (Croatia), at Ptuj Festival (Slovenia). Outside Europe, recent highlights include China (Beijing National Library Arts Centre, Tianjin Grand Theatre, Chengdu Concert Hall, Yangzhou Grand Theatre and Harbin Concert Hall), Japan (Phoenix Hall and Opus Hall in Osaka) and Israel (Eilat Festival). As a soloist, she’s worked with Orchestra Filarmonica Italiana, Roma Tre Orchestra, Orchestra Sinfonica of Chioggia, Orchestra “Il Clavicembalo Verde”, “Musica Festival Donizetti” Orchestra in Bergamo, with italian conductors such as Stefano Ligoratti, Pietro Perini, Giovanni Pelliccia and Paolo Belloli. Sara’s charismatic musicianship and devotion for chamber music has created numerous human and artistic collaborations across the globe with artists such as Pavel Vernikov, Igor Volochine, Alexander Zemtsov, soloits of the prestigious Berliner Philarmoniker, and in Italy with violinist Christian Saccon. From 2014 she has a piano duo with Fabiano Casanova and they have released in 2019 their first four hands CD for Da Vinci Classics label, winner of Global Music Award in California, USA (Best Album and Best Duo). Her discography includes also a CD with violinist Christian Saccon (2011 - Wide Classique), a CD with violinist Germana Porcu which got a 4 Stars review on “Musica” newspaper ( June 2018 – Da Vinci Classics) and a CD with Trio Carducci (December 2018 – Brilliant Classics). Born in 1984 in Bergamo, Sara started to play piano at the age of 8 under the guidance of her father, who is an amateur organist and grew up in a family with a strong love for music. Her training is rooted in some of the best international pedagogical traditions. After graduation with highest honors at “G. Donizetti” Conservatory in Bergamo as student of Maria Grazia Bellocchio, from 2007 she focused her studies on the Russian School under the guidance of Konstantin Bogino, at Santa Cecilia Academy in Bergamo and Accademia Perosi in Biella. In 2011 she obtained with highest marks the Chamber music Degree at Pianistic Academy “Incontri col Maestro” in Imola, under the guidance of Tchaikovsky Trio. In 2019 she got a II Level Master in Piano and Chamber music at “C. Pollini” Conservatory in Padua (IT). Sara has also been selected to participate in many prestigious masterclasses by Norma Fisher, Martin Roscoe, Andrzej Jasinski, Sergei Dorensky, Vasilly Lobanov, Pavel Gililov, Mats Widlund, Alexei Kornienko and Marian Rybicki. Sara is recipient of many awards: Mayr Award, Edoardo Gavasso Award, First prize in the International Piano Forum in Chioggia, Third Prize at Open Piano Competition in London (2013). She received as well scholarship from Accademia Perosi of Biella (2008) and Royal Academy of London (2011). Sara’s concerts are often broadcast by national public radios, such as Rai, Radio Classica and Radio Vaticana. Her interest for synaesthetic experiences in music led Sara to give life to an association, together with other friends, with the aim to promote music and contamination among arts. Associazione Cluster has also the purpose to promote young talents, giving them the possibility to perform. She is Artistic Director, together with Fabiano Casanova, of “Il Castello Armonico” Concert Season. Sara is also a beloved and passionate teacher. From 2013 she’s Piano professor at “G.Donizetti” Conservatory in Bergamo. Her love for sharing emotions and music experience have established Sara among the finest and versatile Italian concert pianists of new generation.

Mikhail Ivanovich Glinka (b Novospasskoye, nr Yelnya, Smolensk district, 20 May/1 June 1804; d Berlin, 15 Feb 1857). Russian composer. He was the first Russian composer to combine distinction in speaking the musical idiom of the day with a personal and strongly original voice. Emerging from the background of a provincial dilettante, though with generous access to local music-making opportunties, he made himself at home in metropolitan centres and mastered the procedures of Italian and French opera, and complemented that expertise with skill in motivic and contrapuntal working as well as instrumentation. His compositions, especially the operas A Life for the Tsar and Ruslan and Lyudmila and the orchestral fantasia Kamarinskaya, represent cornerstones of what are known as the ‘Russian classics’, and furnished models for later 19th-century composers.