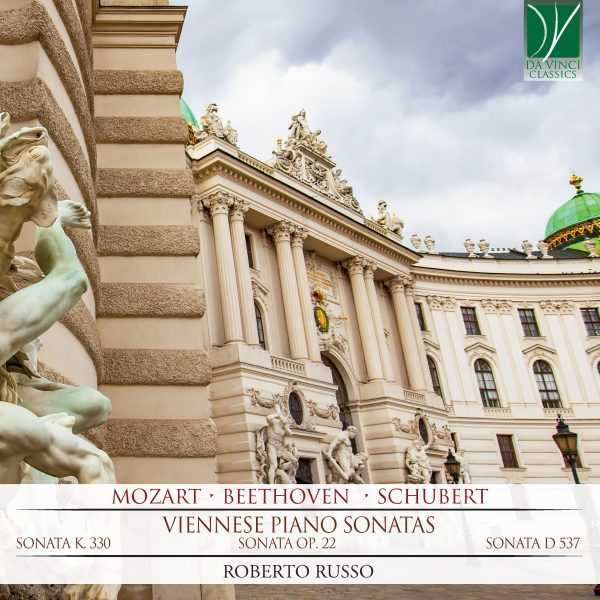 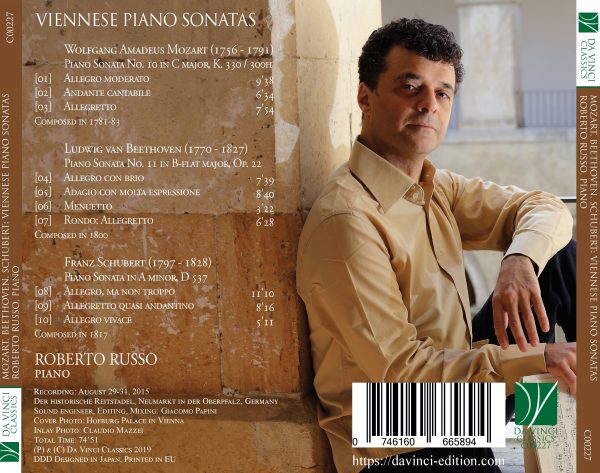 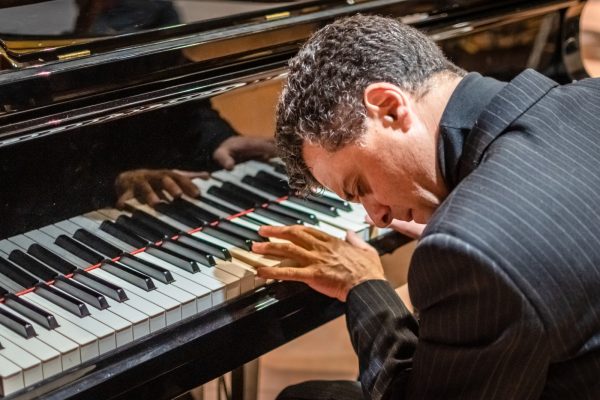 This CD gathers three Sonatas which play a very important role in the history of music. These are somewhat iconic works, because – when correctly studied – they contain all the ambivalent, contradictory (and therefore interesting) features of a whole universe of meaning: indeed, the Sonata form is precisely this, when it is understood as a crucial stage in the musical evolution. Modern times have made us acquainted with the idea that these great frameworks of meaning are not-so-reconciled organisms: subterranean forces, hidden circumventions of the rules, silent superstructures of significance are concealed behind a seeming plasticity. The Sonata form, similar to the novel in literature, can become a “work-world”: it can mirror the whole richness of the possibility.
The C-major Sonata KV 330 (1781-83) by Wolfgang Amadeus Mozart is, from this viewpoint, a kind of a treasure chest. True, the formal scheme is already fixed. However, for Mozart, this seems to become an occasion for experimenting. The first movement is an Allegro moderato showing an uncommon plurality of themes, almost as if the composer wanted to highlight the original character of the various subjects. The development, in turn, follows unforeseen paths. At the risk of becoming too radical, we could state that Mozart manages to infuse fragments of an almost operatic theatricality inside the Sonata form (and particularly in KV 330). Considering how the thematic fragments are introduced and presented in the first movement, one notes a new emphasis, leaving the structure’s obligations in the foreground. Also the work on the thematic material is transformed, as it follows the logic of a marked expressiveness. Here, all details are already embodied in a more global tale; they seem to strive for a powerful presence against the degradation to mere structural elements. The second movement – an Andante cantabile in F major, which could rightfully be compared to the best Lieder – brings this theatrical and expressive character to shores reminding us of the arioso meditations of a lonely figure. The Finale is the thematic and festive apotheosis of this voluble expressiveness: what counts is the itinerary, the narrative, the path, as if we were in the presence of a primeval Wanderer (and this, as will be seen, is not by chance).
Mozart’s extreme modernity (his freedom within the given prescriptions) is demonstrated by the other pianistic colossus which this CD juxtaposes to the preceding Sonata – namely, Ludwig van Beethoven’s B-flat major Sonata op. 22. This was composed between 1799 and 1800, when the reception of the classical style (through Haydn’s masterful mediation) seemed to have been fully accomplished, with extraordinary success, thus opening new ways. This Sonata presents itself in a moment of crucial transition: for this reason, it possesses unique and interesting features. From certain viewpoints, it offers yet another disturbance of the form (which is still respected), following a dialectics between necessity and freedom, between rigour and extremism – something which, in Erich Auerbach’s words, is a “figure” of a human situation. Also in the case of Sonata op. 22 – as noted by Charles Rosen – the composer’s interest is focused on the management of the material. Indeed, the thematic development is striking and it imposes itself as something new, unique, masterful. There is, however, another element. Mozart’s theatrical style (which had important consequences on the logical structure) is replaced by a dramatic tone and a contrast of dynamics which will become determining also in certain of Schubert’s works. In the following Adagio con molta espressione, the lyrical tone already shows some different traits, which are no longer placid: the song is not just and solely a contemplation; it rather lets the hearer foresee future events, marked by omens. The Viennese style is certainly respected in the Minuet and in the closing movement, but it appears as a farewell, as noted once more by Rosen. Beethoven appears to have written a classical-style Sonata as if it were the last possible one.
This important and decisive corrosion operated by Beethoven is, in the end, at the root of Franz Schubert’s compositional choices. Roberto Russo presents here the A-minor Sonata op. 164, D 537, written in 1817, but which became only lately a pillar of the canonic repertoire. The reason for this is easily found: it is an uncommon work, under many aspects; a work which can seemingly be conceived as a respectful homage to the classical form, but which, deep inside, reveals itself as an attempt to exceed the predetermined schemes. The first movement has a fiery mood, Beethoven-like, with phrasings transmitting a seeming epic character: this piece offers an immediate drama, which slowly encounters its own, complex, psychological transformation. Here is Schubert’s novelty: what used to be a dialectical conflict in Beethoven becomes here a game of attenuation and silent exasperation. The Allegretto quasi Andantino can be considered as a metaphor of Schubert’s great pilgrimages – those of the above-mentioned Wanderer who sometimes manages to find occasional homes. We are in an unexplored land: form becomes the outer shell of unthinkable paths.
In conclusion, this selection of “not-just-classical” Sonatas (which are in fact already projected towards modernity) seems to communicate a further message: beyond all conventions (which are always the result of complex historical designs) there always exists a possible balance of rigour and transgression, and this balance is indeed the mark of human agency, the goal of a universal measure which makes society possible. This is a deeply-felt meditation on form and on its possibilities: this is what, in fact, always inspires the profound work of the great composers.

Roberto Russo began his piano studies under the guidance of his father, Mario, a musician, pedagogue and painter. After his Conservatory Diploma, obtained under the guidance of Giuseppe Maiorca, he studied with Daniel Rivera and Franco Scala. In 1990, he was admitted to the master courses held by Maria Tipo at the Conservatoire Supérieure in Geneva (Switzerland), where he obtained the Diplôme de perfectionnement. Later, he participated in master courses given by Jörg Demus (piano), Fausto Zadra (piano) and Peter Schreier (German Lieder), and he also studied composition under the mentorship of Italo Vescovo, Silvano Sardi and Domenico Bartolucci.
His concert activity began in 1985, and it led him to perform in the most important cities in Argentina, Canada, China, Denmark, France, Germany, Italy, Lithuania, Malta, Mexico, Norway, Poland, Spain, UK, USA and Switzerland. His performances were reviewed by the Italian and foreign press, and have been recorded or broadcast by RAI (Italy), Radio Vaticana, Radio Toscana Classica (Italy), Houston Public Radio (USA) and Radio Televisión Argentina. Musicologist Brenno Boccadoro, writing about one of his performances, defined it as “true, sincere and deeply poetical”; pianist and critic Riccardo Risaliti praised his “authentic sensitivity and his deep knowledge of the instrument”, while noting the “compositional wisdom” demonstrated in his own Piano Preludes; pianist Maria Tipo considers his “artistic sensitivity” as being “top class”, while Harvey Sachs, the author and music historian, pointed out his “...beautiful playing: the rhythm, the phrasing, the attacks, the releases, the beauty of his sound, the way he allows the motifs to stand out without actually underlining or exaggerating them...”. Roberto Russo has been the Artistic Director of the International Piano Competition Premio Franz Liszt in Grottammare (Italy) from 2000 to 2005; he is a member of the New York Classical Music Society and of the Piano Week International Festival & Summer School. He cooperated with the British composer Michael Stimpson, with the Canadian cellist Bridget MacRae and with Lithuanian oboist Juste Gelgotaite. He has a collaboration also with the Italian tenor Alessandro Maffucci. As a music critic and author, he writes for L’Ospite Ingrato (an online journal of the University of Siena, Italy), for Forme e percorsi dell’ascolto (a seminar on the philosophy of music by the Università della Calabria) and for De Musica (a continuing seminar on the philosophy of music of the University of Milan).
He is a Steinway Artist since 2012; he gives courses and master classes at Universities and Conservatories in Norway (Høgskolen i Tromsø), Spain (Conservatorio Superior de Música de Oviedo), Poland (Akademia Muzyczna w Krakowie), Romania (Universitatea Nationala de Muzica din Bucuresti) and the UK (Royal College of Music of London).
He has also composed piano, choir and chamber music works.