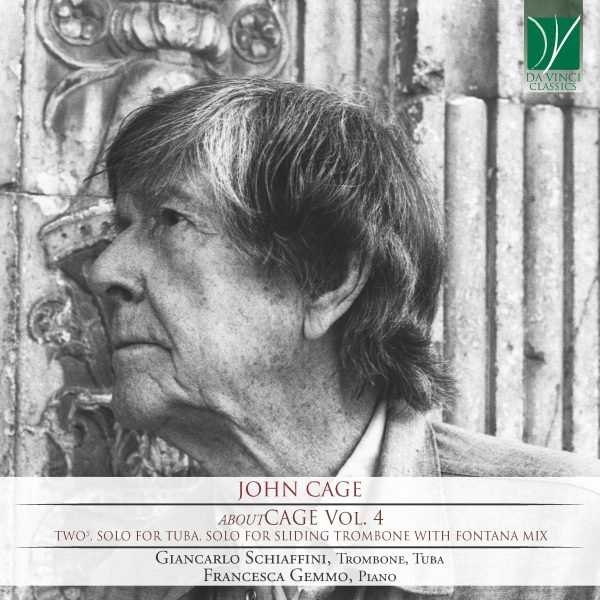 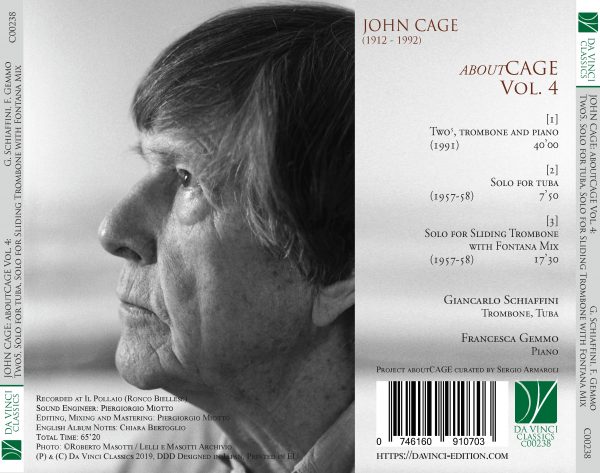 The textbook definition of the main elements of music is “pitch, duration, intensity and timbre”. Traditional Western music notation developed a synthetic system capable of specifying – with various degrees of precision – each of these elements. Pitch is determined by the position of notes on the stave; duration by the graphic shape of the notes; intensity by marks such as p, f and similar indications; timbre is usually specified by the composer by indicating the piece’s overall instrumental or vocal destination, and some nuances such as piano pedaling, violin pizzicatos etc.

Each of these parameters is susceptible of creative modification; the changing of pitches (while maintaining the relative distances) goes under the name of transposition; the change of duration may be determined by a performer’s choice of a quicker or slower tempo (though here too the relative durations should normally be respected); performers have some freedom in determining how the dynamic indications translate into actual decibels; and the change of instrumentation is commonly practised in the form of transcriptions.

All of the above applies to “traditional” Western music and to its notation. However, the twentieth century brought substantial novelties in the treatment of each of these components, and John Cage (1912-1992) was one of the composers who delighted most in pushing the boundaries of what could still qualify as “musical composition”. Some of his most iconic works do not specify the pitches of the notes which have to be produced; the performers are left free to produce sounds of their choice, following verbal or graphic instructions given by the composer. Needless to say, such indications are much less precise and allow a much wider degree of creative decisions than those found in traditional notation.

In turn, the duration of the sounds may be freely determined by the performers; instead of beats and of their groupings and divisions, as in traditional notation, the interpreters of Cage’s works frequently read from scores indicating time slots during which one or more musical “events” (sounds) can or should be produced. Occasionally, the intensity of these events may also be defined by the performers, with a greater or lesser degree of independence. Finally, there are works whose instrumentation is unspecified; the most famous of them is, of course, 4’ 33’’, which can be “played” on any means of sound production, and whose aural result actually depends on the sounds inadvertently and/or purposefully produced by the audience and the surrounding ambient.

The capability to intervene in such a dramatic fashion on the actual aural shape of the piece has deeply modified the very concept of musical work, of composition and of performance; any two performances of the same “piece” will bear minimal or no resemblance to each other, as the only element making them two performances of the “same” piece is the concept behind them, and such a concept may be impossible to recognize without resorting to the score.

This applies in a particularly impressive fashion to the so-called Number-Pieces by John Cages: a set of more than forty pieces, whose titles are composed of a number written in letters and a superscript in digits (as in the case of Two5 recorded here). The first number, i.e. the one indicated through a word, refers to the number of performers involved; the second establishes the order of composition of the piece among those for the same number of players.

Therefore, Two5 is the fifth of the Number-Pieces to have been written for two players. Written in October 1991, and premiered by Hildegard Kleeb and Roland Dahinden in Frankfurt am Main in January 1992, i.e. just a few months before the composer’s death, it is scored for tenor trombone and piano, and it is a piece of considerable length (approximately forty minutes). The actual performance is interspersed with long silences which may last up to five minutes: silence, that protagonist of Cage’s music, is once more called to the fore, and, in the composer’s last years, it becomes a catalyzer of the artistic process. As in many other works by Cage, the durations are replaced by time brackets; the piano part is composed of groups of several “sound events” for each time bracket, including single tones and dyads. The trombone part exploits the instrument’s capability to free itself from the constraints of the twelve-tone division of the octave, in an open confrontation with the piano’s forced reliance on the equal temperament system. Indeed, for the trombone, each semitone (i.e. each of the twelve parts of the octave) is further divided into six micro intervals (it should be noted that this represents an extremely complex challenge to the performers’ ability). And just as the intonation is subtly nuanced, coloring each semitone with a microscopic world of shades, so is the dynamics, which explores the slightest variations of intensity. In the composer’s words, “Any changes of dynamics (pp and thereabouts for both instruments) should be, like changes in breath, as imperceptible as possible”. Even though the planning and mastery required by such a performance are extremely complex, the result should hypnotize the listener in an almost otherworldly exploration of unheard-of possibilities; as specified by Cage, “The piano should sound absent minded, without regularity or presence”. Only the trombone’s shortest sounds may shake this unperturbable and unperturbed rippling of micro sound waves: “If there is at some point a very short sound on the trombone it can be extremely loud, inexplicable”, as directed by Cage.

The idea of “open work” is explored to a very high degree also in the second of the pieces recorded here. The Solo for Tuba (1957-8) is in fact one of the components of Cage’s Concert for Piano and Orchestra (1957-1958). The seemingly traditional title is extremely misleading (indeed, Cage’s use of “Concert” instead of “Concerto” should give one pause). There is no ensemble score for this composition; the performers are free to play the piece in its entirety or to select one or more of its sections; the number of players is also undetermined by the composer, and the various “solos” constituting its several sections may be played in any order. The Concert, dedicated to Elaine de Kooning, was premiered shortly after its completion, on May 15th, 1958, at the New York City Hall; the piano soloist was David Tudor, while the ensemble was conducted by Merce Cunningham.

The material originating in Cage’s Concert gave life to a rich subset of artistic works, both by Cage and by other musicians; Fontana Mix is actually one of the germinations from the original piece. If a definition is to be used, Fontana Mix can be best interpreted as a genetic code for a family of musical works, rather than as a musical work in itself; it is closer to a tool than to a musical score. Fontana Mix is made of a series of sheets of paper and of transparencies; on the sheets of paper the performers can find the drawings of a series of curved lines. Ten of the transparencies, instead, are provided with a varied number of points (ranging from seven to thirty, with a preference for the prime numbers and for the multiples of six), while the remaining two transparencies have respectively a grid and a straight line. The process leading to the actual performance of (or rather “with”) Fontana Mix is rather complex; suffice it to say that by layering one of the paper sheets with one of the ten transparencies with points and with the two other transparencies, the performer is enabled to build a musical “score”. Along with materials from other of Cage’s works, Fontana Mix can be performed with the solos written for the Concert, and this is what happens in this recording: here, the trombone solo of the Concert is employed in combination with the “tools” provided in Fontana Mix.

It may be curious to recall the “reasons” behind the puzzling title of this work. In February 1959, Cage was in Milan, Italy, and he worked on a version for two tapes of Fontana Mix at the local Studio di Fonologia, cooperating with the Italian sound engineer Marino Zuccheri. The work had originally been titled Performance Mix; however, possibly charmed by the warmth of his Italian hosts, Cage decided to change the title into Fontana Mix, thus paying homage to the kindness of the local landlady, Miss Fontana. This touch of humanity and of irony matches the balance between complex calculations and an almost childlike pleasure in playing, quite literally, with the musical material. Cage’s entire musical adventure can be seen as an agile, risky and daring promenade on the thin thread connecting artistic creativity and nonsense, absurdity and complex research, satire and mysticism. And even though many see the secret of Cage’s greatness in the variety of compositional and performance processes devised by him, the ultimate response is found in the aural products of these processes. Behind and beyond the knowledge of how this music is made, what really matters is the effect of this music on the listeners’ sensitivity, feelings and imagination; thus, this recording is a welcome opportunity for the listeners to immerse themselves in a world of extraordinary sounds, blossoming from the joint efforts of the composer and of the performers.

In particular, a unique added value of this particular performance is found in the artistic personality of the performers: this is the first recording of works by Cage realized by Giancarlo Schiaffini, an extraordinary musician whose activity spans the entire second half of the twentieth century. His background is nourished by such co-operations as those with Luigi Nono, Giacinto Scelsi and Nuova Consonanza; thus it embraces the some of the most important experiences of the Italian and international avantgarde. In this recording, he collaborates with Francesca Gemmo, who is a composer herself and a specialist of Cage. Thus, their joint efforts will certainly enrich our understanding of Cage’s music and encourage its appreciation.

Giancarlo Schiaffini, composer-trombonist-tubist, was born in Rome in 1942 and graduated in Physics at the University of Rome in 1965. Self-taught, he appeared as soloist in the first free-jazz concerts in Italy and subsequently presented his own compositions widely in the mid 1960’s. In 1970 he studied at Darmstadt with Stockhausen, Ligeti and Globokar and formed the contemporary chamber ensemble Nuove Forme Sonore. He also worked with Franco Evangelisti in 1972 and has since collaborated with the Gruppo di Improvvisazione Nuova consonanza until 1983. In 1975 he founded the Gruppo Romano di Ottoni performing Renaissance and Contemporary music. He is member of the well known Italian Instabile Orchestra. He taught at the Conservatorio “G. Rossini” in Pesaro, “A. Casella” in l’Aquila and at the Summer Courses of Siena Jazz (instrument, improvisation, composition). He plays Contemporary Music, Jazz and Improvisation in concerts and International Festivals of Contemporary music and Jazz like Teatro alla Scala, Accademia di S. Cecilia, Biennale Musica di Venezia, Autunno Musicale di Como, Settembre Musica di Torino, IRCAM, Upic and Festival d’Automne (Paris), Reina Sofia (Madrid), Ars Musica (Bruxelles), Europa Jazz Festival du Mans, Jazz a Mulhouse, Tramway (Rouen), Wien Modern, Aspekte (Salzburg), Donaueschinger Musiktage, Moers, UNEAC (Cuba), Maggio Musicale Fiorentino, Lincoln Center and Hunter College (New York). Mr. Schiaffini has collaborated with John Cage, Karole Armitage, Luigi Nono and Giacinto Scelsi in various performances and works for solo trombone or tuba have been dedicated to him by Scelsi, Nono, Amman, Alandia, Dashow, Villa-Rojo, Renosto, Laneri, Guaccero. His music has been published by BMG, Curci, Edipan, Ricordi. His treatise on contemporary trombone techniques is published by Ricordi, “E non chiamatelo jazz”, about improvisation, “Tragicommedia dell’ascolto”, “Immaginare la musica”, “Errore e pregiudizio” by Auditorium Edizioni.