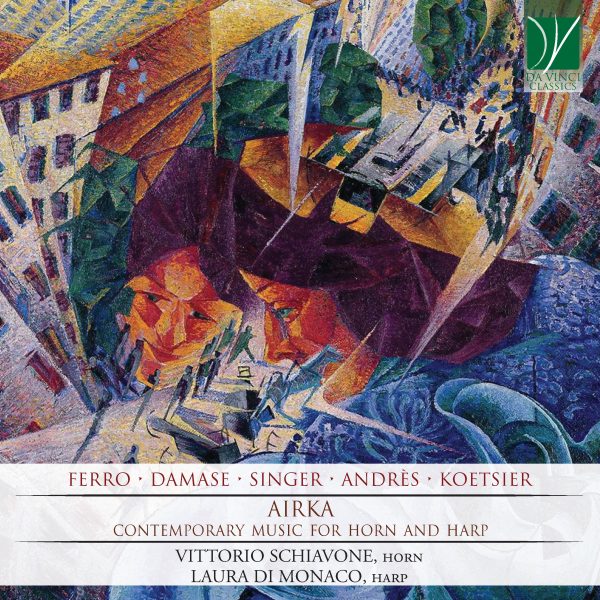 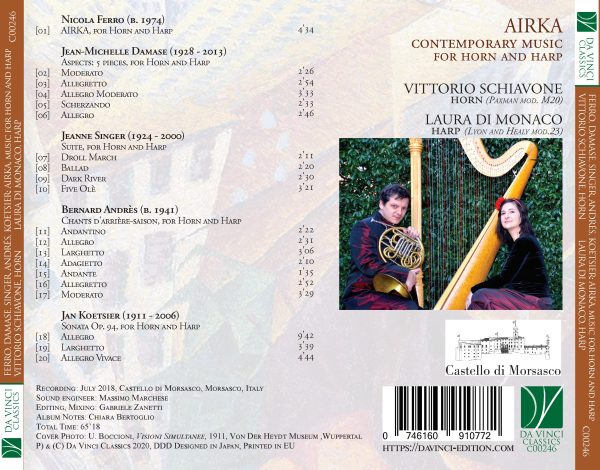 There are several methods for classifying musical instruments. The most common, and probably the most “scientific”, considers the means of sound production, creating families and tribes of instruments, in a fashion not entirely unalike that of zoology or botanic. A much less scientific method, however, could take into account the presence (or lack thereof) of extra-musical associations, also in consideration of the traditional iconography of the instruments.

If such a method should be employed, then the horn and the harp would certainly belong in the family of the “symbolic” instruments (whereas, for example, the piano would not). The horn is frequently associated, both visually and aurally, with hunting, and, by extension, with the woods, with nature, with earth, with the fecundity and the beauty of the created world. Should we indulge in visual imagery, we could say that the horn’s colours are those of the autumnal forests, i.e. brown, maroon and dark red. By contrast, the harp has been portrayed on countless occasions as being embraced by heavenly (and sometimes even winged) musicians; it is symbolically associated with purity, otherworldliness, lightness; with both heaven and water, in its most transparent forms. Here too, we might venture to say that the harp’s sound is frequently imagined as white, clear blue, or turquoise.

These are just images, of course, but they reveal something about the cultural association of these two instruments, which are, incidentally, among those with the longest history. The ancestors of the modern French horn are found in the animals’ horns in which our own ancestors blowed, obtaining a penetrating and intense sound, which could be used for calls, for communications on the battlefield or while hunting; and the first stringed instruments were certainly closer to the harp than to the violin or the piano. Both instruments, moreover, have a long tradition as sacred instruments; both were found, for example, in the Jewish tradition, and both are cited in the Bible (for example in Psalm 150).

Notwithstanding this, the combination of these two instruments is very infrequent in the history of music; or, to be more precise, they are frequently employed as orchestra instruments, and their timbres have been frequently called to merge with each other (for example, and famously, in Brahms’ Deutsches Requiem); however, it takes a certain amount of daring to couple them to the exclusion of other instruments. Theoretically, this duo is fascinating: the horn is a melodic instrument, with a warm and expressive tone, and the harp is an instrument frequently used with harmonic purposes, but also able to “sing” in turn. However, the practical problems are numerous, and mostly due to the very dissimilar intensity of their respective sounds, and to the dramatic difference in how these sounds propagate (the horn’s timbre is as direct and penetrating as the harp’s is mellow and diffusive).

Thus, there were not many composers who accepted this challenge, in the history of music; however, their best results (represented in this Da Vinci Classics publication) testify to the fascinating blend achieved by these two instruments, and to the enormous and varied potential of this “odd couple”. To be sure, however, one needs to be deeply acquainted with the technical features of both instruments, in order to eschew the risks of their precarious balance and to exploit the resources they offer. It is not by chance, therefore, that most of the composers represented here were highly familiar with one or both of these two instruments.

Jean-Michel Damase (1928-2013), for example, was the son of one of the greatest female harp players of the time, i.e. Micheline Kahn. Damase studied the piano with Alfred Cortot in Paris, winning an impressive sequence of awards and concertizing extensively as a soloist. His mother had premiered many works by Fauré and Ravel; and Damase himself won a Grand Prix du Disque for his own recordings of Fauré’s Nocturnes and Barcarolles, performed on the piano. Along with his career as a concert pianist, Damase was a celebrated composer, whose works were premiered, among others, by another of the most famous harpists of the twentieth century, the legendary Nicanor Zabaleta. His particular attention for the instrument played by his mother is observed in one of his most famous pieces, the Sonata for flute and harp, which has become one of the classics for that particular ensemble.

Damase’s mother, Kahn, had been the harp teacher of another of the composers represented here, i.e. the French harpist and composer Bernard Andrès (*1941). Andrès had begun in turn his musical career as a pianist, though his talent for composition had precociously and rather spontaneously come to the surface; however, as his official biography says, “when he was 19 years old, Andrès discovered the harp”, and his love for this instrument would never abandon him. After a brilliant career as a solo harpist and a teacher of international standing, Andrès is currently dedicating himself mainly to the composition of new works, which transmit his personal view of music and of his aesthetics.

The harp was a favourite instrument also for Jan Koetsier (1911-2006), who had been in turn a child prodigy; he had achieved international fame and success as a conductor (he had been a conductor-in-residence of the Concertgebouw Orchestra in Amsterdam) and as a teacher (including a Professorship at the Munich Hochschule für Musik). While many of his most famous works include the presence of the harp (for example the Introduction and Variations on the Vyšehrad Theme by Friedrich Smetana, op. 71, for harp and brass quintet), in his case it can be said that his main source of inspiration was represented by the sound of the brass instruments – including, of course, the horn.

The outsider, among these composer, is however Jeanne Singer (1924-2000), an American composer who was also famous for her love of Siamese cats (as a New York Times article reports, it was Singer “who has established the worldwide standard for Siamese used by judges, breeders and exhibitors”). She lived with as many as twenty-five cats, touring the world both for the performances of her works, and for meeting other cat-breeders. As a musician, she had been a child-prodigy in turn, showing her talent for composition at a very young age; she was also attracted by the “stage” in general (she had fancied herself becoming a movie star), and by the aesthetic ideal of beauty: “Cats are really not that far from music”, she stated. ”You have an esthetic ideal for music. You have this picture in your mind of a perfect Siamese cat, and then you try to mate cats together that will produce cats that will come near this esthetic ideal. Unlike music, though, in the cat you have a standard that describes how an ideal cat should look.”

The same blend of poetry and irony found in her statements is also recognizable in her Suite recorded here, where the humour of Droll March intertwines with the archaic epos of Ballade and the sombre tones of Dark River, eventually finding a nonchalant respite in Five Olé.

Also the pieces by Andrès are full of intense emotions; they weave a fabric of narratives, each painting a different atmosphere of sounds and colours, and each telling a tale, with an immediacy which is not frequently found in other works written by contemporary composers.

Jan Koetsier’s Sonata is, however, another exception which confirms the rule: here too we find a fully mastered tonal idiom, structuring wide phrasings and generous atmospheres. A very refined timbral research demonstrates the composer’s awareness of the potential of both instruments, and also of how they can best interact. The three movements are rich in emotions, moods and character, and here again we can find the extremes of tenderness and of irony, and virtually all of the affections which lie between them.

Damase’s Aspects, by contrast, are those whose harmonic language is perhaps most adventurous, and the influence of the great composers of the French school is clearly discernible. However, it is particularly interesting to observe the composer’s skillful work on the development and juxtaposition of the motifs, which both recur on various occasions throughout the cycle, and are also imperceptibly elaborated and reshaped so as to bend themselves to a variety of musical and emotional situations.

Together with the fascinating sounds of Nicola Ferro’s Airka, these works constitute a really fascinating and unusual itinerary which will not fail to enthrall the listeners; and, if their musical fantasy does not disdain symbolic suggestions, it is very likely that they will find themselves in an enchanted musical world, suspended between Mother Earth and the airy lightness of heaven.

Laura Di Monaco studied with Roberta Alessandrini at the “G. Verdi” Conservatoire in Milan from which she graudated in 1997 and subsequently (in 2006) also from the “F. Bonporti” Conseravtoire ” in Trento both with full marks. She continued her musical formation in France at the Antibes Conservatoire and in 1998 she won the gold medal at the Grand Prix Ville d’Antibes. In 1999, she returned to Milan and graduated from the Accademia della Filarmonica della Scala. Her studies continued with world renowned harpists and composers Elisabeth Fontan-Binoche, Susanna Mildonian, Judith Liber, Fabrice Pierre, David Watkins, and Bernard Andrès. Winner of numerous national and international competitions, such as the “Rovere d’oro” in S. Bartolomeo al Mare (1993) she broadcast a recital for Radio Vaticana after having been chosen as one of the 5 musicians for the "10 e Lode: Neo Diplomati in Passerella" series. Laura also won second prize at the prestigious concorso per arpa "V. Salvi" (2002). Laura is reagularly called upon to play as principal harp in the Orchestra Città Lirica (Pisa); Orchestra Filarmonica del Conservatorio "G. Verdi" (Milano), Orchestra Sinfonica del Piemonte, Orchestra G. Cantelli (Milano), Orchestra Sinfonica di Savona, I Pomeriggi Musicali (Milano), Orchestra Filarmonica "A. Toscanini" (Parma); Orchestra del Teatro "Carlo Felice" (Genova), Orchestra Filarmonica del Teatro di Bologna, and in the Orchestra dell'Arena di Verona. Both as soloist and in chamber groups, she has given concerts for important musical organisations amongst which the Associazione Musicale “Dino Ciani”, Centro Culturale Antonianum, Società dei Concerti, Amici della Musica, Fondazione "Salieri". From 2005 to 2008 she was principal harp in the, Orchestra Giovanile "Luigi Cherubini", created and conducted by Riccardo Muti.

Vittorio Schiavone graduated in French Horn from the “F. Cilea” Conservatoire in Reggio Calabria and subsequently he continued his studies at the Accademia della Filarmonica della Scala. He auditioned and won the audition for the position of principal horn in the “Haydn” Orchestra of Bolzano and Trento (Fondazione Haydn), where he was invited to make his solo debut with the Mozart’s Horn Concerto K. 447 and Britten’s Serenade for Tenor, Horn, and Strings with the tenor Francesco Araiza. After four years, Vittorio decided it was time to spread his wings and left Bolzano to perform in numerous other orchestras as Teatro Massimo (Palermo), Arena (Verona). He won the audition at La Scala Theater (Milano), Royal Philarmonic Orchestra (London), and London Symphony Orchestra as guest principal horn, performing regularly with them since 2015. In 2012, for the RSI (Swiss Radio and Television) he played Schumann’s Andante & Variations for 2 Pianos, 2 Cellos and Horn in B flat major, alongside Martha Argerich. In 2015/2016 season he was at the Royal Philharmonica Orchestra (London). In 2016, he received critical acclaim with the London Symphony Orchestra conducted by François-Xavier Roth performing the Corno (Horn) Obbligato in Mahler’s 5th Symphony. About him, Peter Reed wrote: “The Scherzo, [...] brilliantly played, with Vittorio Schiavone’s magical horn obbligato delivered from his seated position...” (classicalsource.com)