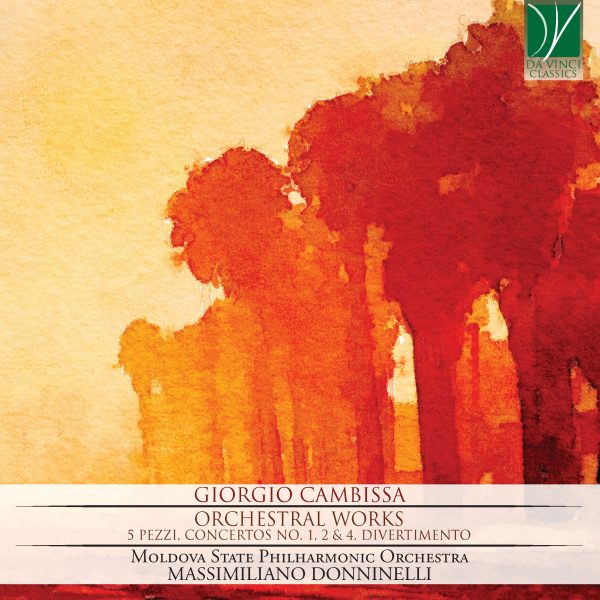 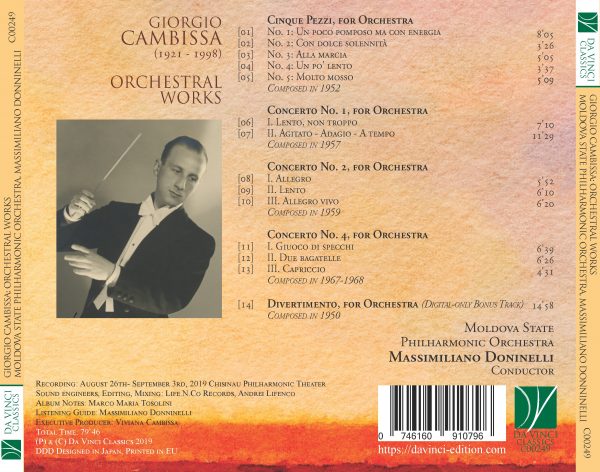 Trieste. Where the echo still resounds of artistic seasons populated by true Masters. Here the cultural fusion of Mitteleuropa with Italy (an Italy made of both the Liberty and the Neoclassical styles) and with a Slavic-speaking folkloric sensitivity, all cooperate to make of this city a unique case at the European level.

For those endowed with a keen perceptivity, it is an extraordinary workshop – first of all, a listening workshop. One only needs to think of the languages which were spoken in the Trieste of the Twenties, to the accents, to the many dialects and their influences, in order to understand that the aural-phonetic education of a great-musician-to-be constitutes the very seed of a magnificent eclecticism. It would nourish the art of Cambissa, as well as that of other composers from Trieste and the Venezia Giulia region, including both Italophones and Slavophones. Their mastery used to be forgotten, but today it is being rediscovered and is reaching the present-day generations. Among them are Hillersberg, Viozzi, Bugamelli, Mirth, Medicus, Zafred, Safred, Pipolo, Coral, Merkù, Radole, Sofianopulo, up to Danieli, Bibalo and Nieder. Cambissa enters in the ranks of these great composers, who were all characterized by a certain (and very valuable) stylistic “indiscipline”. All of the above-cited musicians (and we apologize with those we may have omitted to cite), precisely due to their freedom to look to the past with an affectionate and dynamic memory, were driven to a great work of formal and structural solidity.

Cambissa’s artistic and professional working relationships (preceded by equally high-profile educational stages) describe, similar to an experiential (rather than to a conceptual) map, the itinerary of development in Cambissa’s poetics. This happens since the factual aspects (his conducting of both small and large orchestras) are always balanced with the creative and theoretical ones.

The measure of his excellent path is given by his studies with Hnatiszyn, Zecchi and Vito Levi in Trieste, continued with Giorgio Federico Ghedini in Milan, broadened (in the field of orchestra conducting) in Sienna with Guarnieri, and sealed by a degree in Italian literature (with a focus on Music history). It is however with his periods of study in Salzburg with von Karajan and with Celibidache – that alchemist of musical phenomenology – that we dive into the abysses of the most solemn and profound mastery.

For his entire life, Cambissa juxtaposed to his artistic output some very practical activities (such as being the Getreue Korrepetitor at the Teatro Verdi of Trieste from 1942 to 1945), even with a managerial dimension (such as the historical and prestigious direction of the Conservatory of Bolzano and later of that of Rome). This allowed him to never lose contact with the institutions of musical higher education, as well as with those achieving absolute excellence: his twenty years as the artistic director of the international piano Competition “F. Busoni” of Bolzano are an unavoidable witness of this all.

Thus, his life was full of actual satisfactions and of institutional acknowledgments. However, as concerns his compositional activity, he underwent a fate unequal to that of his conducting activity, where he cooperated with the likes of Backhaus, Gieseking, Grumiaux, Cortot and Géza Anda.

Of course, he did win some international competitions (particularly in the early Sixties): this bears witness to his ability to convince the international juries, notwithstanding the pressure of the Darmstadt structuralist school, which dominated at the time.

Those who know the dynamics of that time are aware that it was exceptionally sensational for somebody like Cambissa (whose style was unsubordinated to the dictates of the era) to win an international composition competition.

Sadly, in Italy, his dimension as a creator of music was unclear. However, this did not prevent him from creating – with a certain continuity in spite of the high number of his institutional and managerial engagements – a wealth of works, particularly as concerns chamber music and symphonic works. In his orchestral works, conceived as enlarged chamber music, the most representative and significant aspect of Cambissa’s oeuvre emerges.

Cambissa’s style of composing was devoted to the greatness of the Italian culture, broadly intended (almost coincident with the Mediterranean); it did not eschew the aesthetical use of a kind of French-style sensiblerie, with a delicate anti-Romanticism. It also valued highly both the History of Music and that of Art, with an attentive eye to the formal and proportional canons of Beauty (with all of these nouns capitalized).

When he was barely twenty-four, he had written a set of Variations and Fugue on a theme by Frescobaldi: this is highly significant as concerns his cultivated gaze to the late-Renaissance magnificence, as well as to the complexity of the ricercare/research, in the deepest and most meta-historical meaning of this word.

He was just seventeen when he composed a Preludio Sinfonico all’Antigone di Sofocle, demonstrating his love for the classical beauty and its forms.

His solid knowledge of the classical poetic culture gave him an extraordinary mastery of the rhythmic and multi-rhythmic construction; it originated from what seems to be a kind of “metrical awareness”, intrinsic to the rhythms which belong first to thought, then to speech, and then proceed to shape the language into phoné, as if it were a musical instrument.

In many of his works, the “little instruments”, the woodwinds (as if they were Arcadian relics) have important roles, expressing enthralling tunes which are never inclined, however, to a sentimental redundancy.

He learnt the great lessons of those Italian and French masters who preceded him: Ghedini, who had been his teacher, a genius who opened the way for stimuli coming from Respighi, Poulenc, Petrassi, as well as from the softest and most agreeable aspects of Stravinsky. Those lessons became, as Cambissa entered his mature years, the mark of a high-profile polystylism justifying, in our time, the full rediscovery of his works. This should happen – it is devoutly to be wished – particularly in “his” own land: Trieste was the starting point for a luminous and multifaceted career which saw him as a great orchestra conductor, a great pedagogue, a great artistic director and director of Conservatories, but also a great composer.

The Cinque pezzi per orchestra, constituting a suite from the ballet La favola della Bella Addormentata nel Bosco, trace a true narrative of sounds. Its five sections are marked by a pronounced difference in their colours and characters, following each other with a particular naturalness. The composer also exploited the possibilities of style, thus creating a series of passing tableaux which suggest a sequence of implicit imagery. The solution of this stylistic dovetailing is particularly efficient; it also demonstrates, at the same time, that the composer completely mastered tradition, since he could lead it back, wherever it could be best placed, into a much more modern context, respecting a great formal and stylistic consistency.

His Concerto n. 1 per Orchestra is a sharp-cornered work, with a refined but sometimes slightly testy character. The composer’s scoring is full of a sense of elaboration, from the very first bars; thus, all of the materials which are presented bring with themselves a feeling of being disposed to be transformed into something else. This gaze, looking to a continuous change (even if it is not explicitly declared) gives to the work a characteristic sound, and imparts a special formal unity to the whole piece.

The Concerto n. 2 per Orchestra stands out for its noteworthy sense of research in the theme, in the harmonies and in the orchestration. An intense dramatic character, frequently juxtaposed to an elegant sense of lightness, marks the entire piece, giving it a continuous presence of the novelty. Nothing seems to stop; everything flows, through an aerial touch, even where the darkest colours dominate.

The Concerto n. 4 per Orchestra shows, since it very first bars, a profile with marked traits. Its thematic lines, in fact, are frequently charged with mystery and intensity. The chordal movements rapidly unfold from the closed positions to a wide-ranging and ample distribution, thus creating a game of sizes. The orchestration is an ally in these features, creating an alchemy of colours: even though they may clash with each other at first, they soon acquire a warm and magnetic tone. The very beat becomes an element of density or rarefaction in the scoring, remaining, throughout the entire piece, as the cornerstone of the fascination of a style rich in wisdom and magic.

The Divertimento per Orchestra is a work characterized by a particular taste and elegance in the thematic research. An evident lyricism, in the central section – following a brilliant and marcato beginning – imparts to the work a feeling of research and experimentation. The modern language, which is permeated by a valued tradition, expresses a dramatic feeling which is particularly evident in the central section. The Allegro Finale’s thematic brilliancy and colouristic invention bring the hearer into an unexpected dimension, particularly charged with new energy.

Massimiliano Donninelli: He represents one of the best interpreters of his generation of the repertoire of the 20th century.
From the beginning of his carreer he was passionate about contemporary music as a privileged way to live his time and the repertoire of the tradition. Through conducting he collaborated with prestigious festivals in Italy, France, Germany, Spain, Slovenija, Croatia, Portugal, United Kingdom, Usa, Switzerland, Austria, Finland, Holland, Canada, Serbia, Moldova, Greece. He collaborated with prestigious artists as Luciano Berio, Valeria Moriconi, Brett Deubner and many others, conducting orchestra as Orchestra Bel'Arte (Paris), Southern Illinois Symphony Orchestra, Orchestra Filarmonica Nationala "Serghei Lunchevici”... at the same time he dedicates himself to composition that are performed in Italy, Germany, Slovenia, France, Croatia, Brasil, Spain, USA, broadcasted by RssSky, Rete A, Telequattro, RadioVaticana, RAI, UN Radio (Colombia), Discovery Channel, RadioShalom, RTVSlovenija (Koper). He recorded for CBC, Rai, Rai-Slo, RNE, Rusty Records, Palomar Records, Radio-Moldova, RadioFrance.
Massimiliano Donninelli as conductor it is distinguished by a special interpretative sensitivity and dedication to the composer's idea through a deep and particularly respectful knowledge of the score.

Cambissa Giorgio (1921-1998) was a conductor and graduated in composition. Headmaster of the Conservatory of Music in Bolzano from 1962 to 1980 and then headmaster of the Conservatory of Music in Rome and member of S.Cecilia’s Academy in Rome until 1989. His professors were Hnatiszyn, Levi and Ghedini for composition and Guarnieri, Zecchi, von Karajan and Celibidache for orchestra conducting. His compositions received awards and special mentions in national and international competitions, including the first prize at the First Competition Queen Elizabeth of Belgium in 1961 for Chamber Orchestra. He was the President and Artistic Director of the international piano competition Ferruccio Busoni and the President of the Concerts Society in Bolzano for about 20 years. As Conductor he distinguished himself in numerous concerts in collaboration with famous soloists such as pianists Backhaus, Gieseking and Cortot and violinist Grumiaux. He undertook missions abroad on behalf of the Italian Ministry of Education and in 1964 took part to almost all committees in charge of improving the Conservatory Education System. In 1975 he was awarded the Gold Medal of the Honorary Members of School, Culture and Art. In 1984 he was elected Member of the Musical Committee "Società Autori ed Editori" (SIAE). In 1985 the President of the Italian Republic Mr. Pertini awarded him with the Honour of Grand Officer of Merit of the Italian Republic. He was a jury member of several national and international Music competitions.