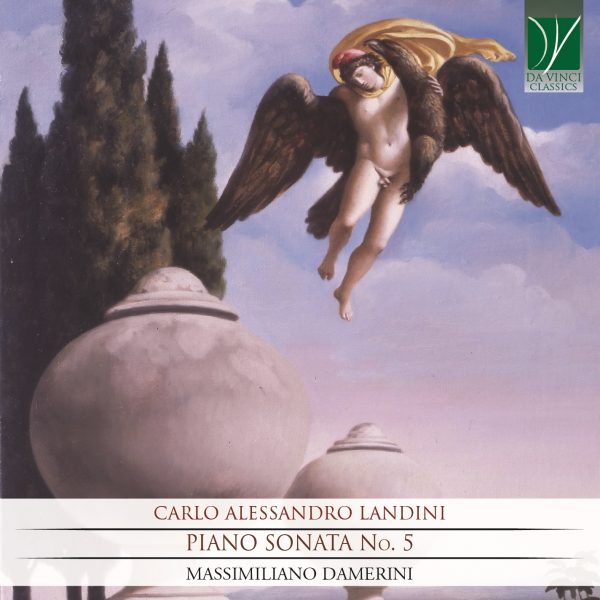 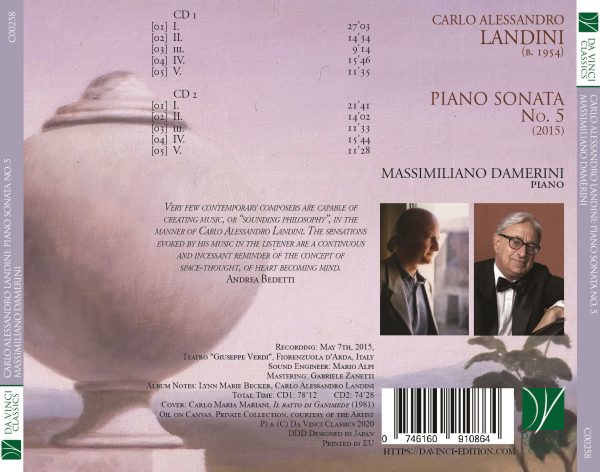 The Sonata no. 5 requires a slow, calm listening whose aim is to contrast the fast, often frantic rhythms of our time to a broader point of view that is beyond the general way of conceiving the mundane life and art of our present. Landini’s music doesn’t come to terms with the fast pace of the contemporary times, but rather escapes it. While intending to recreate and rejuvenate a now dull and flattened present, this Sonata no. 5 makes us rethink and redefine the rules. A new musical form together with a new grammar and a groundbreaking syntax take us to a place beyond our expected listening experience. Structure, form and technique are an essential element in this composition. Yet, Landini defines his own music as “feeble, frail, saturnine, melancholic par excellence”, something that “has no present, but is rooted in the two extremes of historical time, past and future. Both of them designed to find a sense for listening”. Melancholia, which is deeply entrenched in his soul and exudes in this composition, also has another meaning: it is not synonymous with disease but, as one reads in Aristotle, it represents a virtue, the quality more than any other possessed by the sensitive nature, eager to create. Who if not the “melancholic” can grasp and shape the ineffable or, according to Klee’s prophecy, “make it visible”? Landini more than anyone else has made music his own reason for living. If asked which are the best moments of the day for him, this author of some truly monumental creations would probably answer: those enjoying the company of Bach, Brahms, and Skrjabin. One entire afternoon or just a few hours spent sitting at the piano. “It is a lonesome glee – yet sanctifies the mind – with fair association – delight without a cause – arrestless as invisible – a matter of the skies” (Emily Dickinson). As Wackenroder says, music is “the language of angels”. It must also be remembered that Landini is not only a fine musician but also a passionate scholar dealing with psychology and visual arts. Combining music with the “art of gaze” is a real passion for him. Paul Klee’s watercolour Fugue in Red, painted in 1921, takes inspiration from the eighth counterpoint of the Art of Fugue, bringing us back to the idea of visually enacting the idea of a Fugue: here we have one and the same goal being aimed at through different senses. What shall Landini love about paintings that elude the conventional rules of perspective? He shall probably appreciate the interruption of the surface of the canvas in its smallest reliefs and recesses, therefore allowing us to enter into an unprecedented relationship with space and real light, so, by means of this rediscovered relationship with reality, “to ensure a reason for being human” (Lucio Fontana). This is what combines the two arts and what emerges while listening to the Sonata no. 5. Here we are confronted by an art that, far from being simply didactic and pedagogical, tries nonetheless to research and illuminate that profound sense of humanity which abides in everyone of us. If we had to venture a comparison, the music of Landini could represent for this century what the Metaphysical art of the Dioscuri (Giorgio De Chirico and Alberto Savinio) was for the ‘900. Meaning to contrive a new grammar and syntax both for the artistic form and creative thinking, i.e. to relearn how to compose and paint in such manner to avoid simply being “in tune with the times”.
Lynn Marie Becker

A sound opportunely “loosened” is that which reintegrates the human being – princeps creaturarum – to the top position in Werthetik, the ethics of values, allowing that work, social obligations, the glamour of mundane appointments and presenteeism exercises are relegated to the background. Listening passively means leaving free to act a secret flow of consciousness, enlivening flow, able to give energy rather than stealing it; it means going back to make the time of history coincide with that of the tale, sacred time, theorized by Eliade and by Guénon, with profane time. Listening slowly, reading slowly, and seeing creation through new eyes, compassionate and participating slowness, being able to seize the secret breath of nature beyond the distracting elements which would want to keep us from doing that: this is the goal that Sonata no. 5 for piano elects as its own overriding purpose […] The Sonata no. 5 is, in this sense, a true hymn to nature and to Kantian “praktische Vernunft,” as it contains, equally represented, the feverish pride of Prometheus and the mellow knowledge of Athena (in Greek myth, the latter transmits to the former the knowledge that would allow humankind to take the way of progress and civilization), the “physiological” ambition of man and his “practical discursive” knowledge. While the Sonata no. 5 demands that its listener abandons profane time which seduces and suffocates, it inputs him into the flow of a sacred time which elevates and uplifts to the pomp of an Edenic and pre-human beatitude. Artistic creation is – lest we forget – a process which is always dialectic and open; it is never unidirectional. Only relaxed listening and a sound truly and in every meaning slow and meditated have the ability to make the listener take the path which will lead him to unlimited pleasure and enrichment.
Carlo Alessandro Landini

Massimiliano Damerini: He completed his music training in his native city Genoa, earning degrees in Piano and Composition. Damerini is one of his generation’s most emblematic performers, having played in some of the world’s best theatres and concert halls: Vienna’s Konzerthaus, London’s Barbican Hall, Milan’s La Scala Theater, Buenos Aires’ Teatro Colón, Monaco’s Herkules Saal, Leipzig’s Gewandhaus, Paris’ Salle Gaveau and Cité de la Musique, Geneva’s Victoria Hall, Zurich’s Tonhalle and Madrid’s Auditorio Nacional. Numerous piano pieces have been dedicated to him by distinguished composers like Ambrosini, Asturias, Di Bari, Donatoni, Fellegara, Ferneyhough, Gaslini, Gentilucci, Landini, Sciarrino, Skrzypczak, Sotelo and Vacchi. Also actively working as a composer (his work has been published by Da Vinci, Preludio, Rai Trade), Damerini holds advanced Master Classes all over the world. After attending one of Damerini’s performances in New York, Elliott Carter said: “Each of his concerts is an unforgettable experience”. Following Damerini’s 1997 recital in Monaco, the newspaper Süddeutsche Zeitung referred to him as “one of Italy’s top three pianists of our time, together with Benedetti Michelangeli and Pollini”. In 1992, he won the Italian critics’ «Premio Abbiati» for the most influential performer of the year.

Carlo Alessandro Landini. He studied Piano and Composition at the Conservatory of Milan and the «Conservatoire National Supérieur de Musique» in Paris.
He took advanced courses with Olivier Messiaen, Franco Donatoni, György Ligeti, Iannis Xenakis and Witold Lutosławski and was a recipient of the prestigious «Fulbright Award» to study and teach at the University of California San Diego.
Winner of national and international awards («Valentino Bucchi» in Rome, «Ennio Porrino» in Cagliari, «Ernest Bloch» in Lugano and «W. Serocki» in Warsaw), from 1978 to 1996 Landini attended Darmstadt’s «Ferienkurse für Neue Musik», undeniably a must for a musician of his generation.
His works are published by Sonzogno, Alphonse Leduc and Da Vinci Edition. With 12 monographic and anthological CDs under his belt, in March 2003 he was named «Fellow» of the Italian Academy in New York and «Associate Research Scientist» of the Music Department at New York’s Columbia.
Landini taught seminars and Masterclasses at the University of California, Columbia’s Department of Graduate Studies, the «Eastman School of Music» in Rochester, Buffalo State University, the Musikhochschule in Trossingen (Germany) and the University of Prague.
In 2008, he was the first and only Italian ever to win the Warsaw-based, world-renowned «W. Lutosławski Competition» with Le retour d’Astrée for violin and piano. In 2013 Landini was the only composer selected by ISCM to represent Italy at the 2013 World Music Days in Vienna¬-Bratislava.