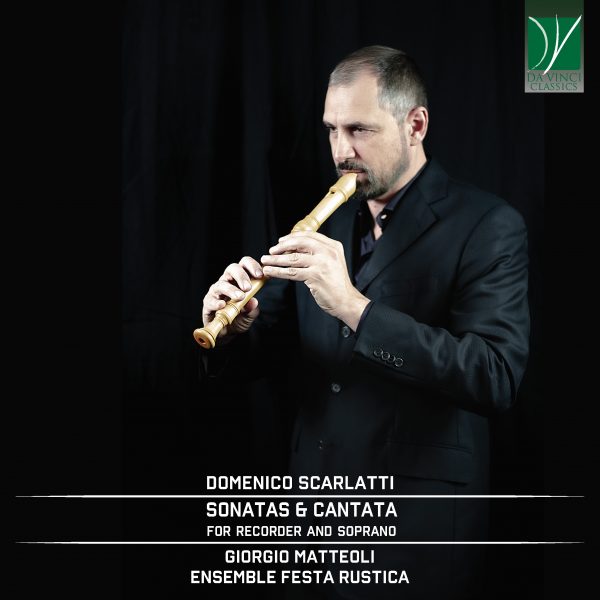 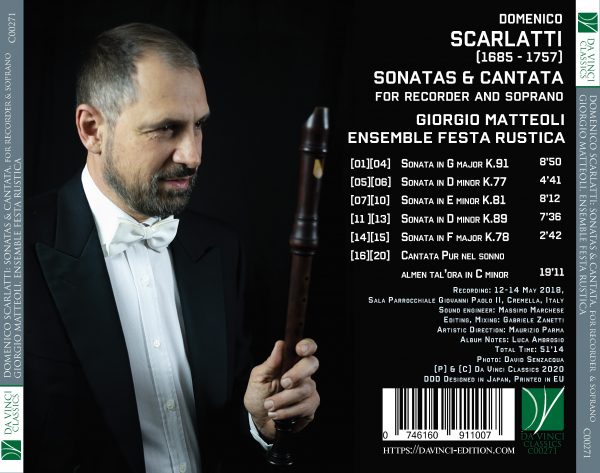 Domenico Scarlatti: Sonatas and Cantata, for Recorder and Soprano

Domenico Scarlatti, the sixth child of the great Alessandro, displayed since a very young age an extraordinary talent for music and an exceptional skill at the keyboard; in fact, already in 1701, when he was not yet 16 years old, he was appointed an organist and composer at the Naples Royal Chapel, with the added task of being the “chamber harpsichordist of H. E.” the Viceroy. After a short stay in Venice, he went to Rome where, starting in 1707, he practised his compositional activity, climbing, step by step, along the cursus honorum of the Roman musical elite, until he became the Chapel Master at the Cappella Giulia at the Basilica of St. Peter. A dozen years later we find him in Lisbon, along with a numerous troupe of Italian musicians and singers, in order to correspond to the generous patronage of João V of Bragança, while also nourishing the natural attitude for the harpsichord of his daughter María Bárbara. After the wedding of his favourite pupil to Ferdinand VI, the Catholic heir to the throne, Domenico would conclude his earthly itinerary in Spain, while entrusting to eternity the vast and varied corpus of his Sonatas for the plucked-string keyboard instrument.

Already by the end of the 1730s, a selection of these «Essercizi per gravicembalo» (as they were titled in the printed collection issued in London in 1738) had enjoyed a discrete fortune on both sides of the Channel, supported by the publishing efforts of foreign admirers and friends, such as the British composer Thomas Roseingrave.

In the Iberian peninsula, a few years later and rather slowly at first, the enormous task was undertaken to collect and copy Scarlatti’s complete Sonatas, in two nearly twin series of fifteen extremely elegant volumes each, which went to Farinelli and are presently in the Biblioteca Nazionale Marciana of Venice and in the Biblioteca Palatina of Parma. It is well known that, in his Sonatas, the “Scarlattino” explored the full gamut of the keyboard, experimenting with nearly all technical, melodic and harmonic difficulties. Such a virtuosity is only occasionally due to their original pedagogical destination, and, in any case, it is never an end to itself, but is always strictly functional to an extremely original compositional thought, which is imbued by gestures and stylistical traits coming both from the hyper-cultivated musical genres (such as the European contrapuntal tradition) and from the popular heritage (the flamenco cante jondo).

Within this garden of delights there is a small number of pieces, which, along with the usual destination for the keyboard, reveal another (albeit not entirely explicit) possible destination for chamber ensemble; namely, these are the Sonatas listed as K 73, 77, 78, 81, 88, 89, 90 and 91 in the Kirkpatrick catalogue. The manuscripts of many of theses Sonatas display a figured thoroughbass, which is hyper-detailed in K 81 and more sporadic and incomplete in others, while in K 77 and 78 it is missing but still probable and plausible. All of these Sonatas are articulated into several movements and follow schemes which are rather consistent with each other: the shorter Sonatas present a sequence of Allegro – Minuetto, and this very same dance (though not labelled as such) concludes nearly all others. These are structured following an alternation of grave – allegro – grave – allegro reminiscent of Corelli; the Sarabandes are found in the third place and the Gigues are scattered here and there. The melodic treatment of the upper part, which is substantially free from polyphonic voice-leading, suggests that it was entrusted to a solo instrument different from the harpsichord: in the case of Sonatas K 88 and K 90 it is rather easy to imagine a bowed string instrument (the violin, or, as maintained by some scholars, the viola d’amore), due to the presence of chords at the ending of the musical phrases and to the frequent octave leaps in the low register, while in the other cases the question is harder to settle.

The discography of these Sonatas has indulged in the most fanciful attributions, ranging from the thin sound of the mandolin or guitar to complete (though historically unreliable) orchestrations. The proposal of Festa Rustica is the first ever to suggest the recorder as the intended instrument for some of these Sonatas, chosen according to their main key, tessitura and idiomatic scoring. Sonata K 81, which is grounded on the medium/high register of a key (i.e. E minor) which is rather comfortable for the soprano recorder, provides strong evidence in support of the above-mentioned hypothesis, all the more so since various rhythmic-melodical patterns, especially in the quick movements, are reminiscent of typical gestures in early-eighteenth century Neapolitan output for the recorder (from Mancini to Sarro and Fiorenza). Something similar could be said about the wonderful G-major Sonata K 91 (opening the album, not by chance): similar to the preceding, it is made of the alternation of heavy slow movements with rapid Allegros in quavers; it is, in turn, entirely free from double stops or chords in the bass.

Above one of the long pedals of the Allegro which closes Sonata K 89, instead, a passage in parallel thirds appears almost suddenly: here, the recorder player is forced to rapidly perform the bichord’s two notes as an arpeggio, trying and reproducing an aural effect which is practically unplayable on a wind instrument. In the Moderato e cantabile of the D-minor Sonata K 77 we return to a scoring which is more suited to the (tenor) recorder; however, in the following Minuet (whose penchant for chromaticism and generous use of seventh-chords belie a more recent composition date) the sextuplets on the last dominant pedal are so low that the recorder player needs to transpose his or her part one octave higher. Indeed, as hinted above, both this Sonata and the short K 78 are the only ones in this selection to have no figured bass: in the F-major Gigha, moreover, the bass moves by bichords of thirds, sixths and octaves, and this represents a clear clue pointing to an evident destination of this piece for the keyboard; while recording it, we have thought it expedient to pay homage (at least in part) to such a destination in the concluding Minuet. In the spirit and practice of the eighteenth century, it was perfectly legitimate to adapt a harpsichord piece for a small chamber ensemble (and vice-versa); likewise, it is plausible to substitute one of the melodic instruments appointed for accompanying a Cantata, such as that found at the album’s ending. Pur nel sonno almen talora has been transmitted, together with seven more Cantatas, in the elegant manuscript of Iberian provenance, which probably belonged in turn to Farinelli, and which is preserved at the Österreichische Nationalbibliothek in Vienna (Hs. 17664), forming – since a long time – the subject of both the musicologists’ and the performers’ interest. In this case, the very title-page declares the destination of the instrumental parts («Cantata con VV.»); however, by replacing the first violin with the recorder (and even though the lowest passages need to be transposed an octave higher, while the concluding bichords need to be played in succession), the polyphonic writing loses nothing of its correctness (and this is rather surprising, considering that this piece was written after the 1730s), gaining, if anything, a greater brilliancy and intelligibility. Moreover, since the «Introduz[ione] alla Cantata» is articulated into a quick movement in 2/4, followed, once more, by a graceful minuet, this offers a kind of ideal connection with the similar sequences found in the Sonatas.