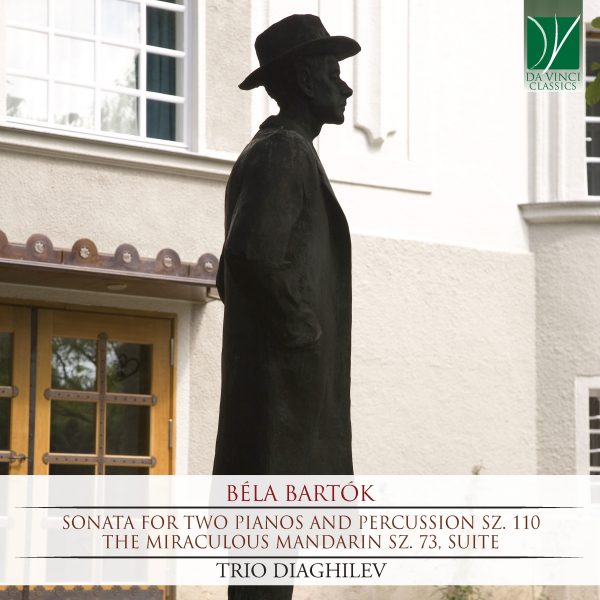 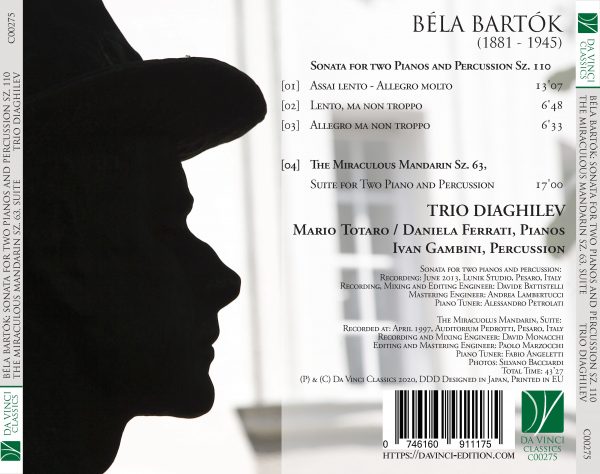 Great polemics and harsh tumults marked the first representation of “Der Wunderbare Mandarin”, which occurred in 1925 at Cologne. This work, composed in 1918/19, has been often compared with the “Rite of Spring” because of its piercing expressiveness, even though the relationship between the two ballets is quite superficial. The Mandarin, indeed, shows the influence which the German expressionism and the “Neuer Wiener Schule” exerted on Bartók. The scandalous subject stopped the integral performance of the work for seventeen years. The story: three bandits obliged a young woman to allure the passers-by for robbing them. Among these is a Chinese mandarin who looks dreadful: the woman is forced to seduce him, till stirring him up an uncontrollable passion. At that moment the three delinquents intervened. After having robbed the mandarin, they tried to kill him, at first suffocating him, then running him through with a sword, and finally hanging him from a hook. But all their efforts are ineffective: the mandarin could only die, when the woman would decide to give him herself, satisfying his desire. The extreme violence of the images and the crude and explicit eroticism seemed absolutely intolerable to the spectator of this period. Bartók inwardly lives the great crisis of musical language at the beginning of 1900 with an exemplary awareness, looking desperately for new expressive resolutions. Disquieting, exasperated, haunted sounds arise from such a feverish search: these sounds are so radical in regard to their experimentalism and originality and at the same time so expressive, involving and effective to describe minutely every gesture, every psychological nuance of the drama. Thanks also to its great rhythmic vitality, the Mandarin today is one of the most famous and appreciated works of the great Hungarian Maestro.

The Sonata for two pianos and percussions was written by Béla Bartók, the Hungarian composer and pioneer of ethnomusicology, in 1937. An extremely accomplished pianist himself, Bartók used to premiere and perform his own works; however, after his second wedding to his former piano student Ditta Pásztory, in 1923, she became the first performer and the source of inspiration for most of his late piano works. This Sonata, which involves two piano soloists on an equal footing, is, therefore, a highly symbolical musical expression of their union as a couple, as well as an extraordinary masterpiece embodying the essence of musical modernism in pre-World-War-II Europe. Bartók’s extremely refined orchestration skills are fully revealed by the exceedingly polished and demanding timbral details of this justly famous piece, in which each of the four soloists needs to be a true virtuoso of his or her instrument. Not just in the pianos’ parts, in fact, but also in those of the percussionists, Bartók specified with painstaking care all the means needed for the production of sound, including the positioning of the instruments on stage or the use of specific sticks by the percussionists.
At the same time, the modern language of this score is wedded to the traditional forms of classical music, as regards both the overall structure of the work (three movements, following the usual alternation of quick/slow/quick found in most Classical Sonatas) and the movements’ internal structure (the first movement alludes to the Classical Sonata form). This connection between present and past was particularly appreciated by the listeners of the premiere, which took place in Basel, Switzerland (1938), on the occasion of the tenth Chapter of the International Society for Contemporary Music, which had commissioned the piece; Bartók and his wife were the piano soloists. In the following years, the composer also realized a version with orchestra, performed in London and New York (1943) by the Bartók couple: the New York concert was the composer’s farewell to the stage, as he would die in 1945 of leukaemia. The history of chamber music, however, had been marked forever by this unforgettable masterpiece.

The TRIO DIAGHILEV “perform continual ‘coups de theatre’ to the point where they transform an apparently simple concert into truly remarkable performance... with infinitely more daring effects when compared with the orchestral versions”…. “the way in which the Trio succeeds in creating symphonic sounds is impressive, as is the dynamism of the two pianos and percussion…” - comments from the Munich "Süddeutsche Zeitung".
Each player’s stunning instrumental technique, the virtuosity of the pianists, the percussion’s impressive impact, their refined taste and respectful open-mindedness, together with their creativity and resulting emotional tension make the Trio Diaghilev's performances into an astonishing and exciting evening.
The Trio Diaghilev's repertoire includes some of the greatest 20th century musical masterpieces (including works by Bartok, Stravinsky, Milhaud, Satie, Holst, Ravel, Bernstein, Gershwin and Weill) as well as original compositions written especially for them.
The Trio has gained much critical acclaim and great enthusiasm from the public in Italy and abroad. They have performed in prestigious events and festivals (Galleria dei Suoni- Musica 2000- Cidim, Rome; I Concerti dell’Ateneo/UIC, Rome; Futuroma on the opening night for the celebrations of the centenary of the Futurist Movement, Rome; XLuna for the celebrations of the fortieth anniversary of the landing on the moon, Roma; Gioventù Musicale Italiana, Milano; Auditorium Manzoni, Bologna; Associazione Scarlatti, Napoli; ROF (Rossini Opera Festival), Pesaro; Ente Concerti also in Pesaro; Sagra Musicale Malatestiana, Rimini; Autunno Musicale, Como; Amici della Musica, Ancona; Cittadella Theatre, Lugano; Internationales Iffeldorfer Meisterkonzer, Ifferdorf; Moore Theatre, Seattle; Benaroya Hall, Seattle; Rialto Theatre, Tacoma).
They have also worked with some important dance companies (the Italian Ballet company directed by Carla Fracci and Beppe Menegatti, the Dance Theatre of Torino conducted by Matteo Levaggi and the Spectrum Dance Theatre of Seattle conducted by Donald Byrd). They have also taken part as invited ‘guests of honour’ in RAI (Italian Radio) broadcasts (“Radiotre Suite” in Roma, Salone del Lingotto in Torino). They have also performed with the Orchestra of the Teatro Comunale-Bologna, the Filarmonica Toscanini-Parma, The Orchestra Sinfonica Nazionale Rai of Torino, the Haydn Orchester of Bolzano and Trento conducted by Michele Mariotti in Bartok’s Concerto for two pianos, percussion and orchestra.
The Trio Diaghilev have recorded Stravinsky’s The Rite of Spring and Petrushka, also Bartok’s The Miraculous Mandarin on the Taukay label, distributed worldwide by Eroica Classical Recordings.