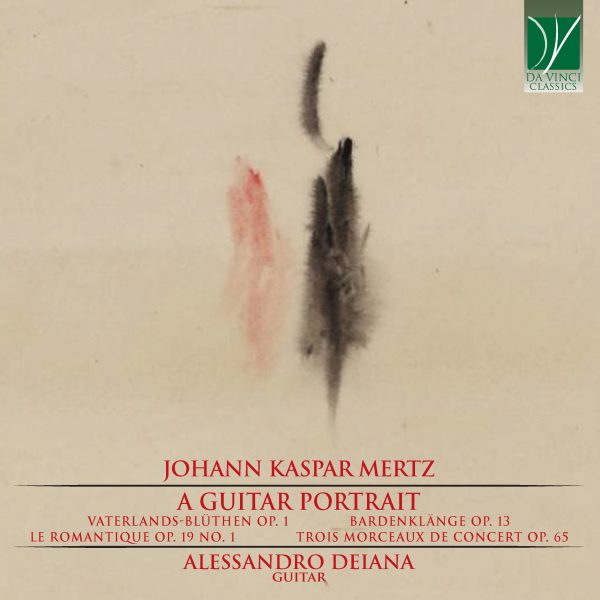 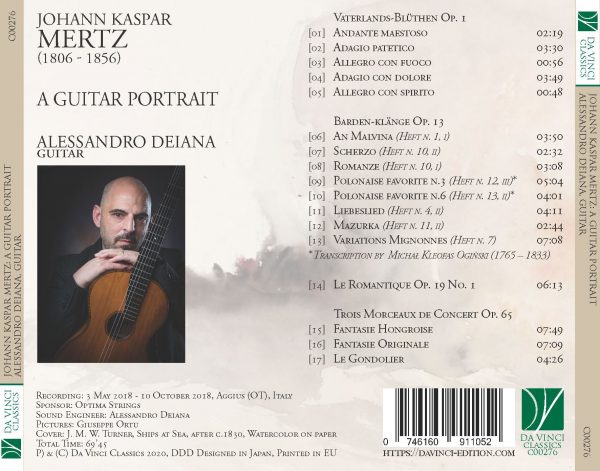 J. K. Mertz, baptised Casparus Josephus Mertz, was born in Pressburg, Hungary (present-day Bratislava, capital of the Slovak Republic), from a family of craftsmen on August 17, 1806.
There is no certain information on his musical education and there is no trace of concert activity until 1834, when he performed at a concert in his hometown organized by the pianist Johann Nepomuk Hummel, who was also born in Pressburg.
In 1840, probably after suggestion of Hummel, he moved to Vienna, one of the most flourishing centres of European culture. The success of his concert sponsored by Empress Carolina Augusta in November 1840 at the Hofburgtheater helped him to insert into the Viennese social and artistic environment. Indeed, during the same year, the partnership with the publisher Tobias Haslinger began with the publication of the Vaterlands-Blüthen, originelle hungarsche Op. 1 (Motherland’s flowers) a collection of five inspired songs which opens this recorded work.
Since 1841, Mertz experienced a period of successful concert tours, performing in Austria, Poland and Russia.
In 1842 he met the pianist Josephine Plantin in Dresden, also engaged in a concert tour, who became his wife on December 14 of the same year. For Mertz, Josephine became a valuable collaborator as well as a life partner: as a pianist she accompanied him in numerous concerts. She was also responsible for the piano parts’ drafting and revision of numerous pieces for guitar and piano published by Mertz. Since 1842 the couple lived in Vienna, not without difficulties, where they worked as concert performers, composers and teachers.
Four years later, the composer’s life was marred by numerous and serious health problems. He began to suffer from a painful neuralgia, an illness that was used to be cured by strychnine. After a violent neuralgia attack, attempting to alleviate his suffering, the beloved Josephine increased the prescribed dose poisoning his husband who miraculously survived. This accident kept Mertz away from the concert scene until February 1848. Subsequently, the delicate clinical picture was complicated by cardiac difficulties and tuberculosis, which may have led to his death. It was October 14, 1856. Mertz’s mortal remains were modestly buried in the Viennese cemetery of Sankt Marxer.
Mockingly, just two days after the composer’s departure, the news of his victory with Concertino – for solo guitar at the Brussels Competition, a guitar composition competition, reached Vienna. This competition was promoted by Nikolai Petrovich Makarov (1810-1890), a Russian nobleman, guitarist, talented composer and tireless organizer in the European romantic guitar world.
Josephine Plantin Mertz sold all her husband’s manuscripts and tools just before her death in 1903. Several works were acquired by the collector and guitarist Carl Oscar Boije af Gennäs (all of Boije’s valuable archival collection is now freely available on the internet), while others were purchased by the Gitarristiche Vereinigung of Munich with a members’ subscription.
Other information on Mertz comes from Nikolai Petrovich Makarov’s memoirs, published for the first time in Moscow as an annex to the magazine Moscovitianin in 1859 with the title of Zadushevnaya Ispoved (Sincere Confession):

I had planned to visit Mertz the following day. […] However, he visited me when he heard from Fischer that I was in Vienna and that I had shown a great desire to meet him.
Mertz was a tall man, about 50, neither fat nor thin, very modest and with no hint of a pretense to greatness about him. As soon as it was feasible, I offered him my guitar and asked him to play something. He took it readily and immediately began to play. It was a fascinating large work.
“By whom is this piece written?” I asked.
“By me,” was the answer. “It has not been published yet.” Then he played another piece, and still another. Each one better than the last – all magnificent. I was dumbfounded with surprise and admiration. I felt like a Columbus discovering a new America, for here was the great guitar composer I had long given up hope of finding […].
The music played by Mertz, to which I listened with ever-growing rapture, contained everything, rich composition, great musical knowledge, excellent development of an idea, unity, novelty, grandeur of style, absence of trivial expression and multiplicity of harmonic effects.
At the same time, there was the clear basic melody, which kept surging above the surface of arpeggios and chords. The effects were brilliant and daring. Basic to all this, he had a deep understanding of the instrument with all its possibilities and hidden secrets. In his full-hearted compositions, I liked the finales and introductions especially well, because they were unusual and were wonderfully developed. They could be removed from the rest and played separately without losing their power and musical significance.

Mertz was a son of his time: his own life seems to have been written by some contemporary opera librettist and his aesthetic, musical and compositional references place him into the European Romantic Movement.
Although he is considered among the most illustrious guitar composers by professionals, the concert performers focus is still today directed to a very small number of compositions, in fact most of his works are rare or very rare to listen. Collective memory and musical historiography retain minimal traces of Mertz who was however the architect, together with Napoleòn Coste, Giulio Regondi and few others, of the guitar survival in the era of piano and great orchestral sounds. As proof of what has been mentioned, it is indicative that Joseph Kaspar Mertz is curiously and erroneously remembered today as Johann Kaspar, as reported in most publications since the beginning of the twentieth century.
He was a rather prolific composer, considering that his activity was concentrated in twenty years’ time. In tackling this publication, among over one hundred published opus numbers and numerous manuscripts, it was initially thought to consider the original works only. As the catalogue analysis proceeded, in order to draw an exhaustive author’s profile, it was realised that his transcription work could not be ignored. Therefore, two of the polonaises of the Polish prince and pianist Michał Kleofas Ogiński (1765 – 1833) have been selected, transcribed by Mertz and included in volumes 12 and 13 of the cycle Bardenklänge Op. 13 (the original piano work of Ogiński was published by Haslinger in 1828).
The Bardenklänge (The Bardic Sounds), a corpus of fifteen volumes containing one to four compositions, is here represented with a free selection of pieces. Mostly written between 1846 and 1848, during convalescence, they were published at different times. The first thirteen volumes were published between 1847 and 1852, the remaining two were released posthumously. The inspiring muse of at least a part of his work could be found in the myth of the bard Ossian, made famous by the Fragments of ancient poetry publication (1760) by the Scottish poet James MacPherson (1736 – 1796). The debut piece of the Bardenklänge, An Malvina (to Malvina), is in fact dedicated to the young widow of the hero Oscar, son of Ossian, who was his guide when he became blind.
Ossianic myths are insolubly linked to the European Romantic thought formation, a movement to which Mertz enthusiastically joined, leaving proof of this in Le Romantique – Grande Fantasie. Tripartite and inspiring work, it was written for ten-string guitar. Here it has been subject of a careful revision and adaptation to the six-string guitar with the aim of making it executable while preserving its epic, nostalgic and melancholic character. The source of reference of this passage was the apocryphal manuscript MS 172 kept in the Royal Danish Library, probably attributable to the Danish guitarist Thorvald Rischel (1861 – 1939) or to his master Søren Degen (1816-1885).
At the end of this publication Trois Morceaux de Concert Op.65 is executed, which is, most likely, the songs heard by Makarov during the meeting abovementioned. Fantasie Hongroise, Fantasie Originale and Le Gondolier, were published posthumously in 1857 as a single volume. As happened with Le Romantique, these large pieces have been minimally revised, allowing them to be performed on the six-string instrument.
The recordings were made playing an anonymous Viennese school guitar in the style of the famous luthier Johann Georg Stauffer (1778-1853), referable to the mid-nineteenth century.

Alessandro Deiana: Born in a teachers’ family and encouraged by his father to follow his natural inclination towards music, since a very early age he has studied classic guitar under the guidance of M° Armando Marrosu at the Conservatorio “L. Canepa” of Sassari. After graduation, he attended courses held by the late M° Alberto Ponce, one of the greatest guitar performers and founder of an unprecedented in the history guitar school, perfecting at the École Normale de Musique de Paris where, in 2002, he obtained the Diplôme Supérieur d'Exécution en Guitare. Upon returning, he furthered his studies in musical education, receiving the diploma in Musical Didactics with full marks and honours in 2007. Subsequently, in 2009, he concluded the Biennial Superior Course of Instrumental Music Teaching. He has been awarded in several national and international musical and guitar performance competitions (Emilio Pujol International Competition of Sassari, Fernando Sor International Competition of Rome, Maria Luisa Anido International Competition of Cagliari, and others).
Since the early years of study, he has performed intense concert activity, both as a solist and in various chamber music ensembles. He has held hundreds of concerts for important institutions and associations in Italy and abroad (Austria, Australia, Belgium, Croatia, France, Germany, Portugal, England, Czech Republic, Spain, Switzerland and Ulster). He often performs solo concerts for guitar and orchestra (Mainzer Kammerorchester of Mainz, Chamber Orchestra of Frankfurt, Incontri Musicali Orchestra of Cagliari, Ellipsis Orchestra, and others).
As a teacher, he worked at the Conservatoires Municipaux of Bussy Saint-George and Savigny le Temple (France) and many years at the Scuola Civica di Musica of Olbia (Sardinia - Italy). Currently, he teaches guitar at the Istituto Comprensivo of Tempio Pausania in Sardinia and holds the role of artistic director at the Scuola Civica di Musica in the same city.
He has made numerous CD, radio and television recordings in Italy and abroad.
He normally plays instruments of the luthier Rinaldo Vacca and uses Optima Strings N.6.

Caspar Joseph Mertz (baptised Casparus Josephus Mertz)[1] was born in Pressburg, now Bratislava (Slovakia), then the capital of the Kingdom of Hungary and part of the Austrian Empire. He was active in Vienna (c.1840–1856), which had been home to various prominent figures of the guitar, including Anton Diabelli, Mauro Giuliani, Wenceslaus Matiegka and Simon Molitor. A virtuoso, he established a solid reputation as a performer. He toured Moravia, Poland, and Russia, and gave performances in Berlin and Dresden. In 1846 Mertz nearly died of an overdose of strychnine that had been prescribed to him as a treatment for neuralgia. Over the following year he was nursed back to health in the presence his wife, the concert pianist Josephine Plantin whom he married in 1842. Some speculation may lead one to the conclusion that listening to his wife performing the romantic piano pieces of the day during his period of recovery may have had an influence on the sound and unusual right hand technique he adopted for the Bardenklänge (Bardic Sounds) op. 13 (1847).

Mertz’s guitar music, unlike that of most of his contemporaries, followed the pianistic models of Chopin, Mendelssohn, Schubert and Schumann, rather than the classical models of Mozart and Haydn (as did Sor and Aguado), or the bel canto style of Rossini (as did Giuliani). Though the date of his birth indicates that that was the logical influence, since Sor was born in 1778, Aguado in 1784 and Giuliani in 1781 while Mertz in 1806, a difference of about 25 years.

The Bardenklänge are probably Mertz’s most important contribution to the guitar repertoire – a series of character pieces in the mould of Schumann.