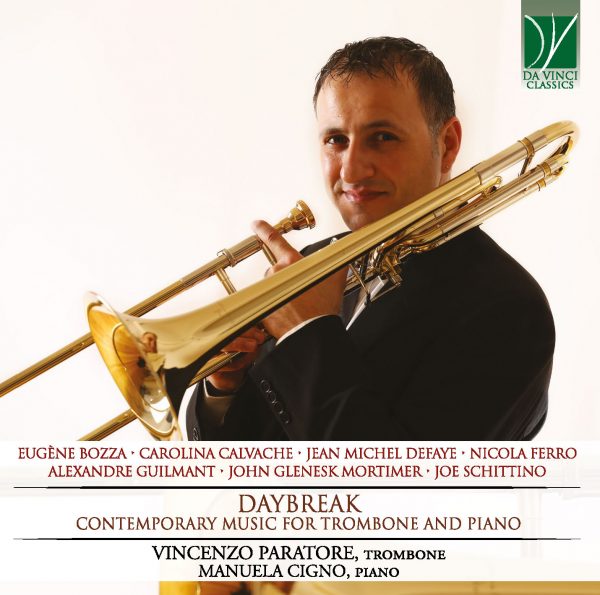 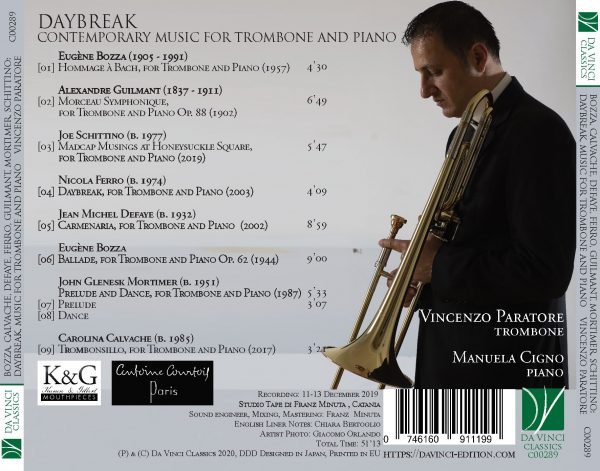 International Soloist, he is currently considered one of the most talented Trombonists of the new generation on the world stage. Graduated from the "V. Bellini" Institute of Catania under the guidance of M° C. Pavone continued his studies at the National Conservatory of Paris obtaining the Premier Prix unanimously as well as the Orchestra dell’ Accademia Nazionale di Santa Cecilia in Rome under the guide of M° J. Mauger. The musical maturity and the technical-instrumental mastery make Vincenzo Paratore a High Professional Level Trombonist and a Multipurpose Musician, so he is winner of Auditions for Trombone and Principal Trombone at the Teatro Massimo “V. Bellini "of Catania, the Orchestra Sinfonica Siciliana and National and International Competitions. He was the first Italian Trombonist to win: the 2nd International Music Competition "Città di Chieri" (2002),the 18th International "Città di Porcia" Competition (2007) and the "5th International Trombone Competition of Jeju " (Korea 2008). He carries out an intense concert activity in Italy and abroad, performing as a soloist and with various formations. It is part of the "Sicilian Brass Quintet",with which he recorded two discs, and of the "Sciara Trombone Quartet",winner of several competitions.He recorded, as a soloist, F. David's Konzertino in the disc "Un Ponte per il Brasile "and Trois Tableaux by J.F. Michel on the album " Live in Valencia " with the renowned Hungarian Corpus Trombone Quartet. Key figure of the Italian Trombone he collaborated with the Teatro Regio of Turin, with the Orchestra Sinfonica Siciliana , Teatro alla Scala, Filarmonica della Scala and Orchestra dell’Accademia Nazionale di Santa Cecilia. Since 2003 he has covered the role of Principal Trombone in the Orchestra of the Teatro Massimo "V. Bellini ”of Catania with which he toured China, Japan, Russia, Spain. He is regularly invited, as teacher and soloist, to the most prestigious International Brass Festivals.Alongside his intense concert activity, he is also Trombone teacher at the V. Bellini Music Institute of Caltanissetta and holds numerous Courses and Masterclasses in Italy, Switzerland, Germany, France, Mexico, Hungary, Korea, Spain, Colombia, Malta, China.

Alexandre Guilmant (b Boulogne-sur-Mer, 12 March 1837; d Meudon, 29 March 1911). French organist, teacher, composer and editor. He was the son of Jean-Baptiste Guilmant, organist of St Nicolas, Boulogne, who was his first teacher; he also received harmony lessons from Gustav Carulli. Devoted to the organ from an early age, he set himself an unremitting regime of practice, composition and studying treatises. At 16 he had become organist of St Joseph, and two years later his first Messe solemnelle in F was performed at St Nicolas. Soon his musical activities broadened to include teaching solfège at the Ecole Communale de Musique, playing the viola in the Société Philharmonique, and establishing an Orphéon that won a number of prizes. In 1860 he went to Brussels to study with the organist J.N. Lemmens, purportedly the inheritor of the authentic tradition of J.S. Bach. Numerous opportunities to inaugurate new organs followed, above all those of Aristide Cavaillé-Coll in Paris at St Sulpice in 1862, and at Notre Dame in 1868. His meteoric rise gained him the prestigious post at La Trinité in 1871.

Thereafter, Paris became the hub of his activities; in 1878 his additional appointment as resident organist of the Palais du Trocadéro – also equipped with a magnificent Cavaillé-Coll organ – encouraged him to pursue a parallel career as a concert recitalist, enabling him to popularize and broaden the organ repertory. His work editing and publishing the then forgotten works of such early composers as Titelouze, Grigny, Clérambault and Couperin, together with an insatiable curiosity regarding the music of his contemporaries, including Liszt, Schumann, Rheinberger, Franck, Saint-Saëns, Widor and S.S. Wesley, produced a performing repertory of unparalleled breadth. His programmes also included Handel’s organ concertos with orchestra, and Berlioz and Wagner transcriptions. Guilmant’s phenomenal energy impelled him to undertake regular extensive recital tours throughout mainland Europe, Britain and America, making a particular impact in the English-speaking world with his catholic breadth of taste, and versatility in managing a large range of instruments.

Guilmant’s excellently formed playing technique was characterized by complete precision and rhythmic clarity; he was also an imaginative but disciplined colourist with registration. He succeeded Widor as organ professor at the Paris Conservatoire (1896–1911), where his pupils included Marcel Dupré, Nadia Boulanger, Clarence Eddy and William C. Carl. In 1894 he joined Vincent d’Indy and Charles Bordes in founding the Schola Cantorum, an educational establishment intended to continue the tradition of Franck. As part of its early music programme, he played the organ in d’Indy’s historic 1904 revival of Monteverdi’s Orfeo.

Guilmant’s own large output for the organ includes eight attractive sonatas which, if much less original and exploratory than Widor’s organ symphonies, have at least the merit of greater accessibility. Yet striking passages can be found, notably the impressionistic stream of dominant 7th chords in the Seventh Sonata’s Lento assai, reflecting his broad-minded approval of Debussy’s then controversial Pelléas et Mélisande. He also wrote ‘La musique d’orgue: les formes, l’exécution, l’improvisation’ (printed in EMDC, II/ii (1926), 1125–80).