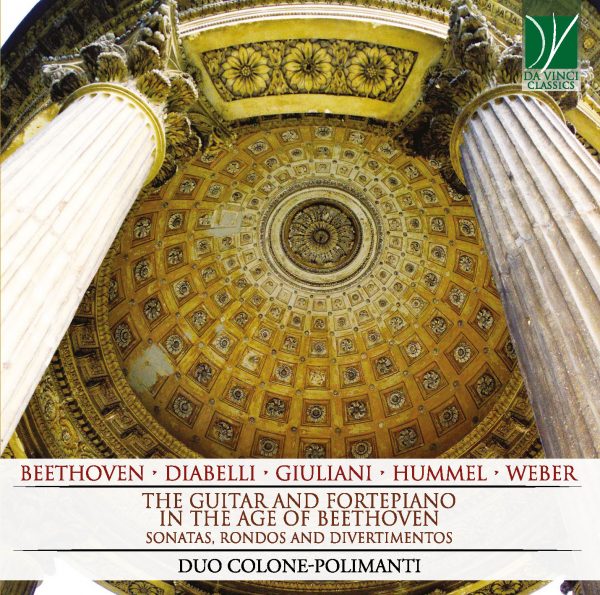 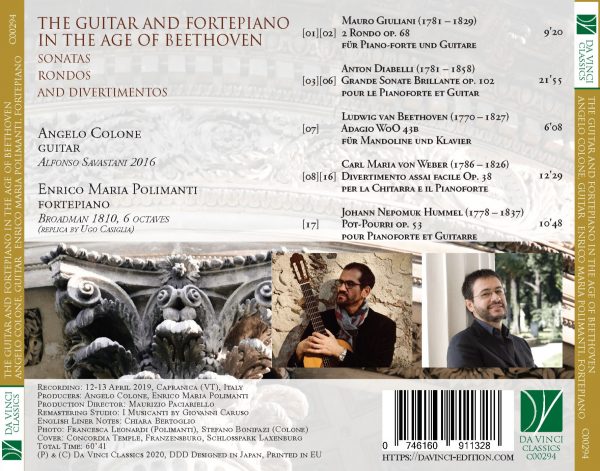 Beethoven, Weber, Diabelli, Giuliani, Hummel: The Guitar and Fortepiano in the Age of Beethoven

Angelo Colone: Interpreter of the most significant repertoire for guitar of the main Italian contemporary composers, soloist appreciated by the major international musical institutions, Angelo Colone graduated and perfected with Alirio and Senio Diaz, Bruno Battisti D’Amario, Angelo Gilardino.
Angelo has been Invited to play for cultural institutions such as the National Academy of Santa Cecilia, the House of Goethe in Rome, the Chigiana Academy of Siena, the Trame Sonore Festival in Mantua. Angelo has been performing since the end of the 1980s in Italian theatres and chambers in Rome, including the Teatro Eliseo, the Teatro Olimpico, the Auditorium Parco della Musica, the Regio theater of Parma, the Metropolitan Theater of Catania, the Magliabechiano Salone in the Uffizi and the Luca Giordano Room in Palazzo Medici Riccardi, Florence.
Abroad he was invited by international cultural institutions in China, Holland, Switzerland, Malta, Belgium.
He has frequently participated in radio broadcasts e.g. RAI, RAI Inter-national and Vatican Radio stations. Also he has participated as a guest in literary events on the occasion of the presentation of new literary works by authors such as Sergio Zavoli and Luis Sepùlveda.
During his concert career Angelo took part in original research projects recorded in significant CDs, including: "Sonetterra" with the Sestetto Moderno (1997), "Sintesi" (2002), "Angelo Angelo" (2004) containing the first absolute recording of the concert for guitar and orchestra Leçons de ténèbres, by Angelo Gilardino, "Goffredo Petrassi - Works for guitar" (2007), a monograph on Mario Castelnuovo-Tedesco for the series "The Masters of the guitar" for the magazine Seicorde ( 2008) realised on the occasion of the fortieth anniversary of the disappearance of the Florentine composer and followed by a cycle of direct broadcasts curated by himself for Vatican Radio, ”Angelo Colone Plays Angelo Gilardino" (2012) and the most recent for Brilliant Classics “Federico Moreno Torroba, complete works for solo guitar”.

Anton Diabelli (b Mattsee, nr Salzburg, 5 Sept 1781; d Vienna, 7 April 1858). Austrian publisher and composer. He studied music in Michaelbeuren and Salzburg and in 1800 entered Raitenhaslach Abbey. After the dissolution of the Bavarian monasteries (1803) he went to Vienna, where he taught the piano and guitar, and soon became known for his arrangements and compositions (six masses by him had been published in Augsburg in 1799); many of his works were published in Vienna. His job as a proofreader for S.A. Steiner & Co. (as detailed in Beethoven’s letters) gave him an increasing interest in music publishing, and in the Wiener Zeitung (15 September 1817) he advertised a subscription for some of his sacred compositions, which were to appear from his newly established publishing house in the Schultergasse. On 29 September he moved to no.351 Am Hof. The first notice of publications (Wiener Zeitung, 11 February 1818) announced the appearance of further works, which were soon being distributed by most music retailers; the works in the subscription series were available on 27 April 1818.

Wishing to acquire business premises of his own, Diabelli made contact with Pietro Cappi, who had been practising as a licensed art dealer in the Spiegelgasse since 30 July 1816. After Cappi’s shop passed to Daniel Sprenger on 8 August 1818, the firm Cappi & Diabelli was established in the Kohlmarkt, and advertised in the Wiener Zeitung (10 December 1818). From its beginning the new firm was remarkably active in publishing current operatic and dance music; anthologies such as Philomele für die Guitarre and Philomele für das Pianoforte and Euterpe for piano (solo and duet) were popular for decades. Similar series appeared for other types of music; the popular Neueste Sammlung komischer Theatergesänge reached 429 volumes. A series of light, pleasant melodies for guitar was given the title Apollo am Damentoilette.

As an experienced musician, Diabelli knew how to respond to the musical fashions of the time; and the connection he formed with Schubert established the company’s widespread fame. Financed on commission, he published Schubert’s first printed works; on 2 April 1821 Erlkönig appeared as op.1 and on 30 April Gretchen am Spinnrade as op.2. Opp.1–7 and 12–14 later became the property of Cappi & Diabelli. Diabelli’s long-established acquaintance with Beethoven, however, led to only a few publications: the reissues Beethoven wanted of the sonatas opp.109–11, and a few first editions of the smaller works. The firm also published the Vaterländischer Künstlerverein, including Beethoven’s Diabelli Variations op.120.

(b Eutin, ?19 Nov 1786; d London, 5 June 1826). Composer, conductor, pianist and critic, son of Franz Anton Weber. A prototypical 19th-century musician-critic, he sought through his works, words and efforts as performer and conductor to promote art and shape emerging middle-class audiences to its appreciation. His contributions to song, choral music and piano music were highly esteemed by his contemporaries, his opera overtures influenced the development of the concert overture and symphonic poem, and his explorations of novel timbres and orchestrations enriched the palette of musical sonorities. With the overwhelming success of his opera Der Freischütz in 1821 he became the leading exponent of German opera in the 1820s and an international celebrity. A seminal figure of the 19th century, he influenced composers as diverse as Marschner, Mendelssohn, Wagner, Meyerbeer, Berlioz and Liszt.

Johann Nepomuk Hummel: (b Pressburg [now Bratislava], 14 Nov 1778; d Weimar, 17 Oct 1837). Austrian pianist, composer, teacher and conductor. He was considered in his time to be one of Europe’s greatest composers and perhaps its greatest pianist.