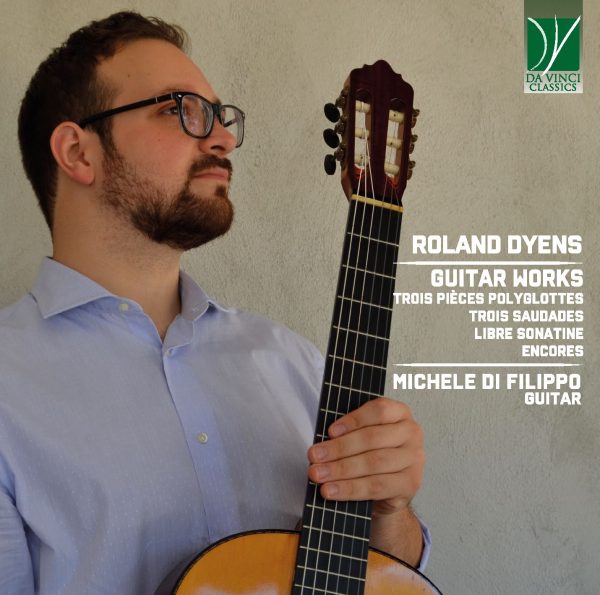 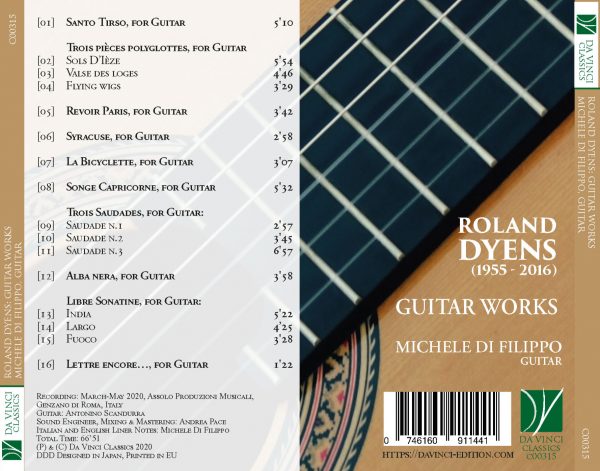 The relationship between Roland Dyens and the guitar began when he was nine, and it has roots so deep that it is difficult to distinguish the guitarist from the composer in his works. A composer, arranger, improviser, Roland Dyens had studied guitar with Alberto Ponce and composition with Désiré Dondeyne; for him, creation was the raison d’être of his artistic life. Everything was creation: from teaching (he taught at the Conservatoire National Supérieur de Musique in Paris) to arrangement, from composition to the performance of his own works. He was capable of creating aural and musical experiences which began ex nihilo, enchanting the audiences with works and improvised creations of genius, which he was able to put in writing without letting them lose their spontaneity and evocative power.
The selection of works chosen for this discographic project represents a quest for those aural experiences, demonstrating the eclecticism of Dyens the composer, and the diverse experiences he tried his hand at.
Santo Tirso is the opening piece of this journey in the musical art of the French composer. In it, we can get a glimpse on the great contrasts and on the multifaceted soul of the musician. The thematic delicacy, emerging from a technique requiring high virtuosity from the performer, leads the listener to experience intense emotions, on a musical itinerary dedicated to the Portuguese city situated to the north of Porto.
The following group of compositions, the Trois pieces polyglottes, confirm the essence of Dyens’ language. The title aptly suggests the intention of expressing, through music, diverse languages, which may go far beyond the practice of guitar playing. Even though they are not bound by objective musical references, the three pieces have in common the fact of being a splendidly successful attempt to explore the possibilities of language, while following a logical scheme. The first piece (Sols D’Ièze) is based on a structured improvisation in the form of a variation, whose protagonist is the note of G sharp.
The second represents the intimate connection between popular tradition, dance and music, in a delicate and light waltz, rich in details. The third (Flying wigs) is an introspective and melancholic piece, though one not without a great lightness and sweetness. The piece flows like a delicate sea breeze.
Revoir Paris, Syracuse, La Bicyclette are original arrangements for the guitar after French songs. Roland Dyens’ skill in arranging makes these popular songs sound extremely suited to the guitar, giving them a totally new character. In Songe capricorne the French composer’s musical exploration goes beyond the earthly boundaries, concentrating, once more, on descriptive elements. In this descriptivism Dyens, while observing the things and dreams around him, goes in quest of himself, demonstrating, once more, his limpid and clear personality.
In the Trois Saudades further details emerge about the deep connection between music and Dyens the man. The dedications of these pieces show the meaningful and affective personal encounters of the composer from Tunis. The first Saudade is dedicated to Alberto Ponce, his teacher: it is a virtuoso piece, but also a deeply nostalgic one: affection and nostalgia which both master and teacher had in common. In the second, dedicated to Arminda Villa-Lobos, we find the Latin-American spirit of Brazilian culture, and a point of encounter with the great composer Heitor Villa-Lobos, to whom he would dedicate also an Hommage. The third Saudade, with the additional title of “Fantasia”, is dedicated to the guitarist-composer Francis Kleynjans, and is in turn divided into three movements (Ritual, Danza, Final). It bears the indication Lembrença do Senhor do Bonfim da Bahia, and it represents the ideal synthesis between Dyens’ art and the influence of Brazilian music, which the composer from Tunis loved so deeply. His interest in popular Latin American music is observable also in the following piece, Alba nera, built on a habanera rhythm.
It is an intense and introspective piece, embodying the deep fascination of this kind of music, and which Dyens expressed in his works. As suggested by the translation of the word Saudades (“lacks”), in this piece one feels the deep nostalgia and the quest for one’s own spirit, which acquires awareness through music. This lack led Dyens to write Libre Sonatine, the central work in this album, divided into three movements: India, Largo and Fuoco. This piece was written following a heart disease causing the French musician to undergo a surgery. He wrote about this experience thus: “Its three movements are an explicit portrait of that very particular period of my life: at first the chaotic India (before the surgery), then Largo (during it) and eventually Fuoco, whose unrestrained rhythms represent a true embodiment of my returning to life”.
The last work in this album is a collection of pieces titled 20 lettres. These are musical letters dedicated to friends and musicians. Lettre encore… is one of this; a very short one which, positioned at the end of this musical itinerary, aims at suggesting to the listener that Dyens’ world is still rich in surprises and aural frescoes to discover.

Michele Di Filippo: Young guitarist-composer, in his short but prolific experience, started in 2009, he had the opportunity to study and perfect himself with teachers in the guitar world, distinguishing himself in national competitions and collaborating with orchestras, concert associations, international festivals, in addition to having made recordings at Vatican Radio. He obtained his Diploma in Guitar with Honors from the Conservatory "Licinio Refice" of Frosinone (2017). Soon he became interested in writing, which led him to record two records of his pieces for guitar, Il Suono dell'Anima (2011) and Il Viaggio (2013), up to receiving a prize at the National Competition "Giovani Musici" with the song, Crossroad, for didactics in middle schools with musical orientation. He undertakes the study of composition and in July 2017 follows the Academic Diploma in Composition for Film Music at the Saint Louis College of Music in Rome under the guidance of the masters Gianluca Podio, Adriano Melchiorre, Alessandro Cusatelli, Silvio Relandini. He participates with the Saint Louis College of Music in several concerts, directing his own compositions for orchestra at the Auditorium Parco della Musica and at the Teatro Eliseo in Rome. As a musical director he participates in the performances of two contemporary works of compositors Andrea Rotondi and Cesare Marinacci, performed with several replicas at the Conservatory of Frosinone and the Teatro dei Documenti in Rome. In 2015, He publishes Cinque Studi da concerto for guitar (Sinfonica). In July 2019, he composed a concert for guitar and symphony orchestra Les six reflexions structured in six variations each on the pitch of each guitar string. He published the composition Tribute to Aaron Copland" and the edition of Canto Popolare, for two Guitars by A. D'Antò and Three sonatinas for Guitar op. 7 by Ferdinando Carulli for Da Vinci Publishing. In 2020 he published with Four studies on resonances, written for guitar (Sinfonica).

Roland Dyens (b Tunisi, 19 October 1955; d Paris, 29 October 2016) was a French classical guitarist, composer, and arranger.
Dyens was born in Tunisia and lived most of his life in Paris. He studied with Spanish classical guitarist Alberto Ponce [2] and with Désiré Dondeyne.
As a performer, Dyens was known for improvisation. Sometimes he opened his concerts with an improvised piece, and he might improvise the program itself, without planning or announcing beforehand what he would be playing. He said that a journalist once told him he had the hands of a classical musician but the mind of a jazz musician. He played Bach suites and he played with jazz musicians at the Arvika Festival in Sweden. A heavy metal band did a version of the third movement of his Libra Sonatine.
Dyens released several volumes of arrangements that included not only the classical music of Fernando Sor but also the Brazilian music of Heitor Villa-Lobos, jazz standards by Thelonious Monk, the French pop of Edith Piaf, and the Gypsy jazz of Django Reinhardt.
Tango en Skaï (1985), is one of his best-known pieces, but also widely played is the more extended Libra Sonatine (1986) written in three movements: "India", "Largo", "Fuoco", composed after Dyens had heart surgery. "Its three movements are an explicit portrayal of that very particular period of my life: first the chaotic India (before the operation), then the Largo (during it) and finally the Fuoco, in which the unrestrained rhythms depict a veritable incarnation of my return to life (and several guitarists often play this last movement as an independent piece)" quotes Dyens. "Skaï" is a French slang term for imitation leather and here refers to the gauchos (cowboys) of Argentina and southern Brazil who are known for their leather outfits.
He taught at Conservatoire National Supérieur de Musique in the position held by his teacher, Alberto Ponce. He died on October 29, 2016 at the age of 61.