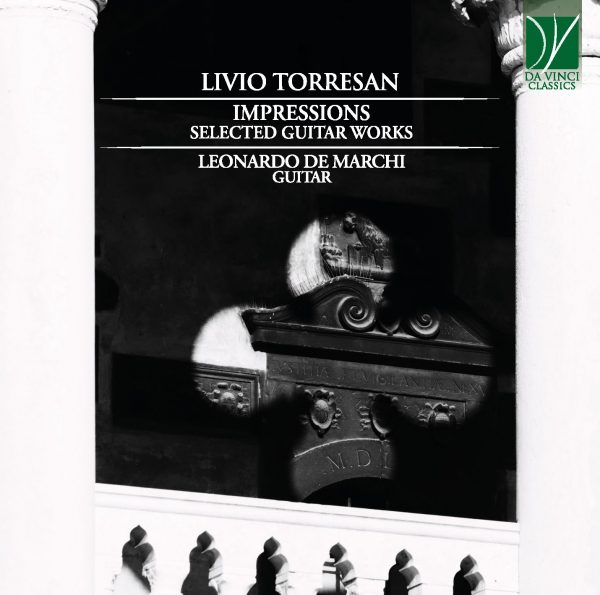 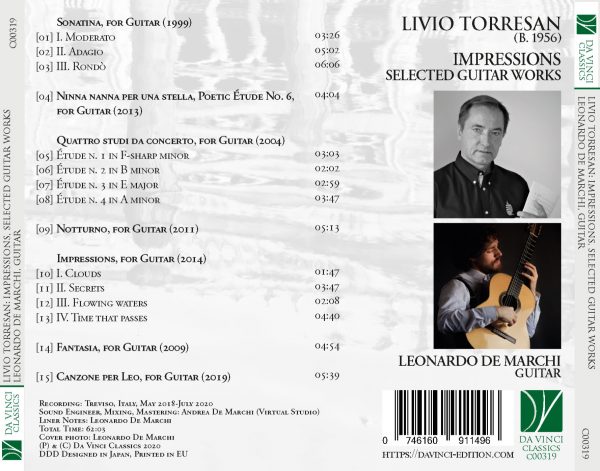 Is it still possible, in a world that has known all sorts of musical languages, to write music using linguistical and rhetorical forms, or models, from the euro-cultural tradition? What evolution is tonality capable of, and in what way does it marry the expressive requests of contemporaneity? These are the deep questions that guide Livio Torresan’s writing research (1957), a composer with a solid guitar training. Over the years, he has dedicated a large number of works to his instrument: this album presents a well thought essay, with the aim of summarizing twenty years of composition activity research threads.
The album begins with the mellow Sonatina (1999), with its three movements – an eloquent and flowing Moderato, a heart moving Andante and a Rondò with strong resonances – which immediately trace the coordinates of an expressive world that brings itself elements such as thematism and the constant use of a euphonic and consonant sound dimension. Regarding the Sonatina, the thematic ideas stand out against the harmonious background of nuances and shades, with sonorous waves that recall the lesson from Debussy’s String Quintet and De Falla’s Homenaje.
Less virtuously engaging (but perhaps for the same reason more subtly charming) is the Ninna nanna per una stella (Lullaby For A Star), from the Studi Poetici series (2013). Although mainly expanding on the higher range, the sound of the piece is well balanced since it uses, in a successful idiomatic manner, a rigorous broad harmonious conduct of the voices (a parti late).
With the demanding Quattro Studi Da Concerto (2004), the liason to the traditional concert studio genre is obvious, both in the strong harmonic tonal reference and in the degree of agility and power required from the interpreter. Unlike what usually happens with a traditional studio, in which the compositional center of gravity is focused on just the technical foundation (ligature, arpeggios, scales…), in the Quattro Studi Da Concerto the mechanical purpose seems not to be Torresan’s main concern. Each study does surely develop a precise gestural aspect, yet the goal of technical progress always seems to be transcended in the name of a superior musical reason.
With the logic of contrasts that animates the playlist, following the Quattro Studi Da Concerto we can find a natural place for the Notturno (2011), in which the importance of the thematicism of Torresan’s music emerges with even greater strength. In this sense, the preference for smooth cantabile lines does not mean renouncing to a compositional rigor: the initial theme in fact acts as generating material in the whole piece, weaving the narration of a coherence that does not affect the variety of the expressive situations.
The suite Impressions (2014) marks a certain return to the Debussian sounds that, above all, characterized the first two Tempi from the Sonatina. Torresan’s style becomes particularly descriptive here: a certain refined use of the tonal relationships allows the composer to outline four images (Clouds, Secrets, Flowing Waters, Time That Passes) in which each one suggested by the writing – be it the uncertain floating of clouds or the tumultuous flow of water – remains tinted by a sense of dreamy melancholy.
The atmospheres of the Fantasia (2009) give a far more extroverted result, with an impetuous rhythmic gait which presents as the most evident trait. The core of this piece is the central section, a two-part mouvement perpetuel with a tight imitative conduct and a continuous modulation; two substantial symmetrical episodes surround this section, with pyrotechnic triplet arpeggios alternated to solemn and hieratic chorals. The fundamental tonal reference, that fluctuates between parallel modes in G sharp minor and A flat major is never in question, though the continuous succession of tonalities leads the Fantasia to be an authentic harmonious and virtuous tour de force.
At the beginning we were wondering which possibile future direction could there be for the tonal language developments, according to Torresan: a possible answer is provided by the most recent Canzone Per Leo (2019). The thematic dimension relatively slides towards the background, in favour of a harmonious dissonant, restless and interlocutory development. Only at the end of the piece does the listener see the narrative tension unfold into a liberating C major triad: this is the most natural epilogue of a CD in which contemporaneity attempts to find its own reflection in the splendours of the past.
Liner Notes by Leonardo De Marchi
Translated by Susan Ann Proctor

Leonardo De Marchi: Concert player, mainly devoted to the most recent guitar literature. He obtained master degrees with honours in guitar in the conservatoires of Venice, Novara and Pavia and followed specialization courses at Giulio Regondi Academy in Milan. He also holds a bachelor degree with honours in German and Slavic studies at Ca’ Foscari university, Venice.
He obtained the first prize in the music competitions of Musile (2008, as chamber musician, and 2009, as soloist), Piombino (2009), Treviso (2014, as chamber musician). Besides his concerts, both in Italy and abroad, he has a significant discography: he recorded, among others, Bach and Haydn for two guitars (DotGuitar), Sergio Sorrentino – Quattordici studi sulla creatività (Sinfonica) and Enantiosemie – Contemporary masterworks for clarinet and guitar (Da Vinci).
He also took part to the monography Parade – Guitar works by Giorgio Colombo Taccani (GuitArt). As editor, he worked on 24 Preludi e Ricercari by A. Franco (Ut Orpheus) and Dedica 2015 by G. Manzoni (Rai Com).
As lecturer and musicologist, he holds masterclasses on the guitar literature for relevant institutions and has written several booklets and listening guides.
His research on the new musical languages led him to study the literature of the ten-string guitar, which he broadened through the cooperation with prominent Italian composers. The first results of his work are published in his essay Nuovi orizzonti per la chitarra a dieci corde (Viator).

Livio Torresan: After having passed his high school leaving examination in classical studies, in 1987 Livio Torresan obtained his guitar diploma with full marks at the Conservatory of Castelfranco Veneto (Italy) with Maestro Stefano Grondona; at the same time he also completed his composition studies with Maestro Bruno Coltro in Padua. He then obtained a teaching diploma for junior and senior high school. In 1998 he won first prize at the “La nostra canzone” composition contest in Treviso. In 1999 he won the International Guitar Composition Contest of Varenna with his “Sonatina”. His pieces are often performed in important guitar festivals (Treviso, Novara, Rome, Milan, Modena, Gorizia); they range from solo instruments to choir and orchestral formations and are published by Sinfonica and Ut Orpheus. The Italian website Dotguitar published in 2018 a documentary about his life and works. His recent Cello concerto in F# minor has been premiered by famous Italian cellist Walter Vestidello. He holds lessons and teaches full-time at a junior-high school with musical orientation. Moreover he is president and artistic director of cultural association “Chitarra in arte”.