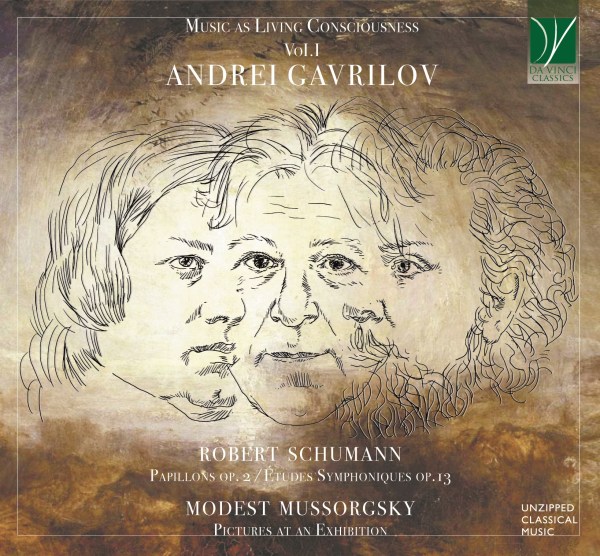 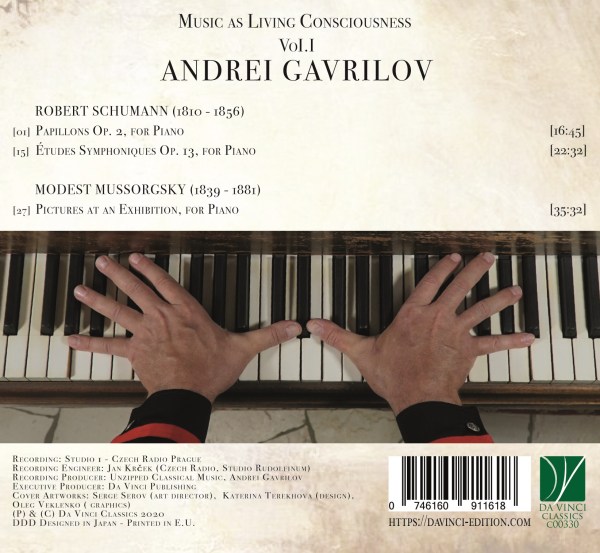 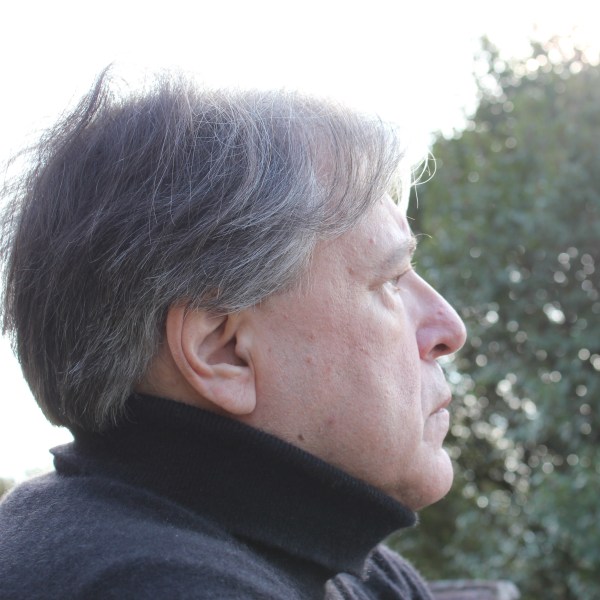 This is a pre-sale title. It will be available for delivery from November 13th.

This album represents two of the greatest masterworks ever composed for the piano. One, the Mussorgsky’s “Pictures”, is the product of the Russian Culture at its zenith, and the other, the Schumann “Etudes” is birthed from the European Culture at its pinnacle. They are both amazing works, but uniquely expressive of their respective creator’s brilliant originality and individuality.

Mussorgsky produced a set of fresh and profoundly expressive musical paintings which utilize a kaleidoscopic toolset to produce an almost cinematic walk-thru of an exhibit that showcases nothing less than the whole of Russian culture at that time and place. The spectrum of ideas is expansive, and the whole of Russia’s grand horizons is addressed end to end in a bravely stated historical context. And the amazing part is that we get to experience the broad extent of philosophical and artistic thought through the soulful eyes of a great writer, an innovative composer, a gifted pianist wrapped into one; this work represents a monumental step forward in advancing the genre, both in terms of subject matter and required technique. This new form lends itself perfectly to allow for the intimate and vibrant expressiveness, the rich imagery, and panoramic depth this Russian piano composition effects and embraces. Modest Petrovich did not care about “self-expression” so much as he desired to capture a musical portrait of his homeland and to share it in his own way with the world.

The Schumann Etudes is an equally challenging and rewarding work. The product of formidable theoretical knowledgeable and towering pianistic ability, the Etudes pushed the boundaries of technical possibility and pioneered a unique technical style of musical writing which incorporated both artistry and philosophy within a uniquely personal style of musical storytelling. Part of the charm of Schumann is his ability to keep the listener engaged in a back-story long running theme while constantly layering in engaging local themes that dance and march and narrate the immediate musical text that captivate the ear. This layering produces an orchestra of sorts within the casement of a single piano. The music seems to engage multiples of piano, and even simulates a diverse range of instruments. This diversity of sound elevates the work from the stature of solo master score to one of polyphonic, poly-tonal virtuosity that effectively produces an almost cinematic spatial spectrum of sonorities. Written by a true master composer and concert virtuoso bearing a phenomenal technical skill, the fabric of the material is suggestive of someone possessing a multiplicity of hands, a Shiva-like figuration, penned upon a giant canvas for a mythical instrument. And yet the utopian beauty is actually possible for a single artist to master, provided he or she is equipped with the communicative skill to clearly articulate the consciousness contained within – one must honor and understand in Toto the content and its homage to romantic beauty and its romantic heritage, including European chivalry of the period.

Music such as contained in these works is not meant simply to be “played”. These works were created as utopian gifts to humanity, as messages to the future about life, living, invitations to think and dance with the mind and body, and of course, about love and loss. These works, and the contents within Taken altogether make for two”Everests of piano literature”, reincarnated in this album to their always rightful place: meditating upon the peak of the material and spiritual world. It was my joy to bring these great men and their music back to life so we could share them together.”

Andrei Gavrilov: He was born in Moscow in 1955 in an artistic family. His father Vladimir Gavrilov was a well known Russian artist, while his mother was a prominent pianist of the school of Heinrich Neuhaus. After being taught piano by his mother, Gavrilov graduated from Central Music School at Moscow State Conservatory in 1973 with Professor Tatiana Kestner. Later in the same year, he entered Moscow Conservatory where he studied in the class of Professor Lev Naumov. In 1974, at the age of 18, Andrei Gavrilov won first prize at the International Tchaikovsky Competition and in the same year made a triumphant international debut at the Salzburg Festival when he was substituting for Sviatoslav Richter. Since then he has enjoyed an impressive international career which included performances with the world's greatest orchestras. He made his London debut in 1976 with Paavo Berglund and the Bournemouth Symphony Orchestra in the Royal Festival Hall. In 1978 he performed with the Berlin Philharmonic in a European concert tour that included 30 performances. By 1980 he had performed in all of the major cultural centers in the world. In 1984, Andrei Gavrilov made a triumphant return to the British concert platform, after a few years of politically enforced absence, giving recitals at the Barbican and the Royal Festival Hall. During that period of his life, he successfully petitioned Mikhail Gorbachev for his freedom, and became the first Soviet artist to be granted permission to stay in the West without having to file for political asylum. Following his Carnegie Hall debut in 1985, Andrei Gavrilov was proclaimed "a major artist" by The New York Times' Donal Henahan. He has since performed with orchestras in New York, Los Angeles, Detroit, Cleveland, Chicago, Philadelphia, Montreal, Toronto, London, Vienna, Paris, Berlin, Munich, Amsterdam, Tokyo, Moscow, St-Petersburg and many other major orchestras with conductors including Abbado, Haitink, Muti, Ozawa, Svetlanov, Tennstedt, Rattle and Neville Mariner among numerous others. Between 1976 and 1990, Andrei Gavrilov was an exclusive artist with EMI, winning several international prizes including the Gramophone award in 1979, Deutscher Schallplattenpreis in 1981, Grand Prix International du Disque de L'Academie Charles Crois in 1985 and 1986, and International Record Critics Award (IRCA) in 1985. In 1998 Andrei Gavrilov was included in Philips' "Great Pianists of the Twentieth Century" collection. His achievements also include the International Accademia Musicale Chigiana Prize assigned to him in 1989 when the jury of music critics proclaimed him “the greatest pianist of the world”.
In October 1990 Andrei Gavrilov signed an exclusive contract with Deutsche Grammophon. That contract resulted in acclaimed recordings of him performing Chopin, Prokofiev, Schubert, Bach and Grieg.
In 1994 – 2001, Andrei Gavrilov took a 7 years long pause during which he performed almost no concerts devoting his time to the studies of philosophy and religion as well as to searching for new ideas and new approaches to music. In 2001 he made his triumphant comeback starting with his tour to Russia where he played four piano concertos in one evening at the Moscow Conservatory. Since then he has been performing more and more regularly around the world with greater success than ever. In 2008 Gavrilov came back for a concert to the United States. In 2009 he made a world tour marked with enormous success. In February 2010 he was invited to the Vienna Philharmonic Golden Hall to play four concertos in a row after a 14 years long break. The concerts were received with great critical acclaim.In 2013 Andrei Gavrilov completed writing his three-volume autobiography the first volume of which was published in Russian and German in March and April 2014 respectively. In December 2016 it was also published in English. The book was accompanied with his new recording of Chopin Nocturnes, which was made specially to be included in this book.
In April 2013 Andrei Gavrilov realized his long time dream of conducting all piano concertos from the piano himself. He performed a concert in Belgrade playing and conducting three romantic concertos in one evening with a full symphony orchestra. Since that year he plays and conducts full symphony orchestras all over the world with great success.
Andrei Gavrilov is planning to publish series of CD / DVD recordings that will include his performances of Schumann, Liszt, Beethoven, Chopin, Bach.

Modest Musorgsky (b Karevo, Pskov district, 9/21 March 1839; d St Petersburg, 16/28 March 1881). Russian composer. His life was disjointed, ending in loneliness and poverty, and at the time of his death some of his most important compositions were left unfinished. His greatest achievements were as a composer of operas and solo songs. Largely self-taught and highly intellectual, he discovered a way of writing for the voice that was both lyrical and true to the inflections of speech. He was the most strikingly individual Russian composer of the later 19th century and an avatar of modernism for the generation of Debussy and Ravel.