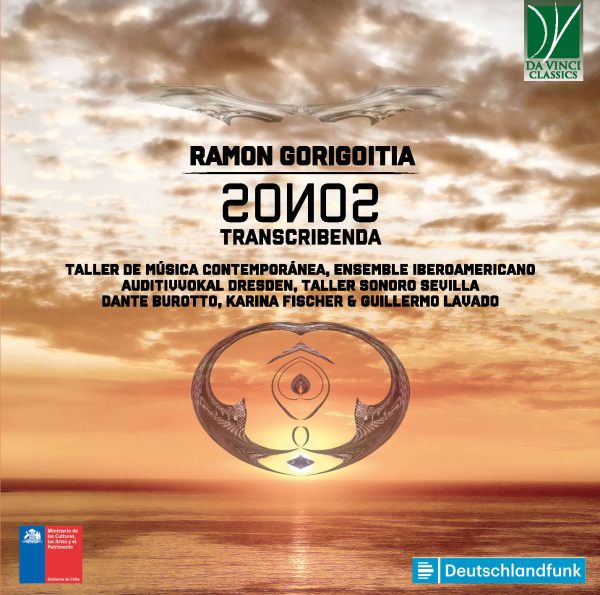 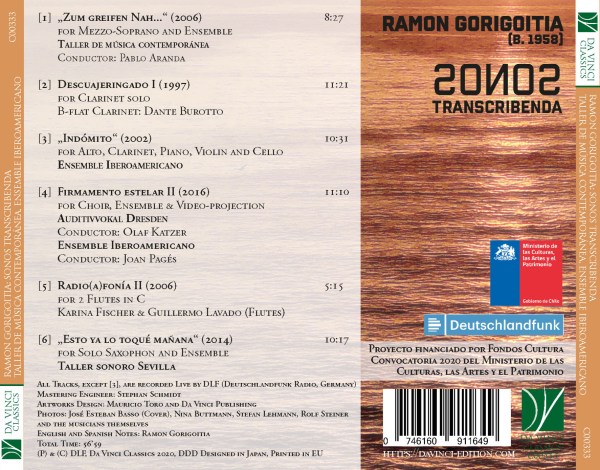 The title clarifies my vision as a composer: To absorb organic natural phenomena or by using literature interpreting those phenomena establishing possible parameters, which can then be transcribed into sound frequencies and dynamic movements, which are what I use in my works. All based on the necessity to find a way to get rid of the academic influence that is overly generalized and with the purpose to emphasize my belief, that creation arises from the sensory and personal experiences one undergoes in the sociocultural frame that contains life.

Zum Greifen nah… (2006)
Life is the central concept of the work, from gestation to birth and the later movement of the human organism. The text contains terms such as life and water, as well as names of divinities of the Hindu religion related to fertility and the energy of nature as the source of all origin of life. In the first part entitled Gestación the relationship of the life process on earth finds its equivalence in the numerical symbolism, on which the theory of spherical sound enunciated by Pythagoras is based. The 16 basic natural harmonics are the basis of the structural musical material. The second part entitled Movimiento is based on a strict transcription of an Electroencephalogram [EEG], whose reading should be interpreted as a continuous speech. The dynamics and density of harmonic textures resulting from the reading of the continuum are directly related to the 10 graphical curves of the EEG representing the movement of the electromagnetic impulses of the human brain. The work is dedicated and released by the Ensemble Taller de música contemporánea in Santiago de Chile, conducted by Pablo Aranda.
This is the recording of the concert held in Cologne in February 2008.

Descuajeringado I (1997)
This is a solo work that is nourished by the ideas of the Neues Musiktheater – new instrumental theatre. It is based on a made-up text, which alludes in a playful way to the difficulties that the work presents for the performer during its execution, exploring the articulated gesture. The term música impura – given by Hans Werner Henze, which pretends to reflect the imperfection of the human being and alludes to the poesia impura of Pablo Neruda – seems to me to be appropriate to define this piece, which is not música pura as it is nourished by meanings from the theatrical language and by an out-of-context semantic idea. Dramaturgy reaches its peak at the Coda in which rhythmic-melodic segments alternate with certain expressions using onomatopoeic phonemes that refer to the title of the work.
Premiered at the Musicahora festival in La Serena, Chile in 2006 by Dante Burotto of the Ensamble contemporáneo from Santiago de Chile, who performs this version recorded in Cologne in October 2010.

Indómito (2002)
It was composed in homage to the mining engineer Ignaz Domeyko, who was rector of the University of Chile in Santiago from 1867 to 1883. The work is based on the description of seven hiking routes that Domeyko explored during 1840 and 1845, his first years of stay in Chile. The geographical latitudes and longitudes of these routes make up the intervallic-harmonic material as well as the chosen metrics.
Domeyko belonged during his time as a student at the University of Vilnius to a Polish independence movement known as the Decembrists, in which the Polish poet Adam Mickiewicz, with whom Domeyko had a close friendship, also participated in a relevant way. Later, during his exile in Paris, Domeyko contacted Chopin, a sympathizer of the same movement, which is why I use poetic fragments of Mickiewicz as well as a quote from Chopin’s Étude No. 12, opus 10, 12, known as the Revolutionary Étude. At the end of the work, which describes the route that Domeyko took in the Araucanía region, I have included a text by the Mapuche poet Elicura Chihuailaf. Written by order of the Ensemble Bartok in homage to the Bicentennial of Ignaz Domeyko, it was premiered at the Festival of Contemporary Music of the University of Chile in 2002.
The present 2009 version corresponds to the Ensemble Iberoamericano from Weimar, Germany.

Firmamento estelar II (2016)
This is the second version based on Firmamento estelar I (Starry Firmament I) for a cappella Choir that was commissioned by Auditivvokal Dresden for the cycle “Oh Freunde, diese Töne…” and premiered in December 2015 at the Hygiene Museum of that city. The work is based on the visual reading of the movement of celestial bodies such as planets, suns, galaxies that we can see with our own eyes. In this case through the projection of a video consisting of a selection of moving images made by the Hubble telescope, which orbits our planet and whose lens captures images at unimaginable distances light years away. This Video-score consists of four transparent pentagrams in a frame of 2,5 x 1,4 mts and subdivided into 24 quadrants. Each chorus singer is assigned a quadrant in the video projection. The movement of these celestial bodies and the intensity of their luminosity determine for each singer the reference frequencies to be followed and also the dynamic levels. The result is a kind of real-time microtonal sound transcription of star motion.
This second version entitled Firmamento estelar II (Starry firmament II) made for instrumental Ensemble and Choir is based on the sound transcription of the recording of the original vocal version, considering the possibilities of articulation of each instrument emulating the first reading. In short, it is a vocal Mimesis of Klangfarbe enlarged in an analogous way with an instrumental ensemble and a live Choir towards a fusion of auditory colours that reflect the image that the spectator experiences during the projection of the video.
Firmamento estelar II was premiered in Chile during the tour of the Dresden Auditivvokal Choir and the Ensemble Iberoamericano in October 2016.
The present recording corresponds to the premiere at the Tonlagen Festival in Hellerau, Germany in the same year. The directors were Olaf Katzer (Auditivvokal) and Joan Pages (Ensemble Iberoamericano).

Radio(a)fonia II (2006)
Radio(a)phony II is based on the transcription of a first aid frequency extracted from the short wave dial, which was used in Germany until the end oft he 90s. The reiterative repetition of a frequency vector represents a continuum that is progressively altered by the complementary movement extracted from the dial frequency. After a densification of multiphonic sounds, this sonority is shelled out from the third octave, descending and imitating itself rhythmically in the manner of a Stretto Canon until it reaches the lowest register end with the same frequencies that open the work. Premiered in Cologne in 2007 by Karina Fischer and Guillermo Lavado of the Ensemble CIMA.

Esto ya lo toqué mañana, (2014)
Based on a reading of the story The Pursuer by Argentine writer Julio Cortázar, I develop a kind of psychogram of the central figure of the story fictional saxophonist Johnny Carter. With the in memoriam dedication Ch.P., Cortázar tells us about the last chapter in the life of jazz saxophonist Charlie Parker (1920-1955), a drug addict since his youth and considered the precursor and greatest icon of bebop. Charlie Parker’s psychopathic periods as a result from his addiction are hinted at through the fragmented transcription of an electroencephalogram [EEG]. The contrasting amplitudes of the graphic representation of the electromagnetic impulses of the human brain in the EEG are characterized by large intermittent jumps and extreme density of the instrumental texture.
The use of two attached sources, the theme “Parker’s mood” and the transcription of his solo in the theme Out of nowhere, serve to represent the sound environment of the central figure. Both titles are arranged and inserted according to the strict transcription of the source, but gradually extracted from their harmonic functional context, to converge in the unstable and psychopathic moments of Charlie Parker.
In addition, the allusion to Charles Ives, one of Parker’s favourite composers with the structuring motive of Unanswered Question serves as a setting in the Coda, which in analogy to the epilogue of The Pursuer relates the death of saxophonist Johnny Carter in the home of a wealthy baroness in New York.
The stage drama assumes figuratively the last words of the central figure of Cortázar with the words: Hacedme una máscara (“Make me a mask”).
Premiered by the Spanish Ensemble Taller sonoro from Sevilla, in concert of the ARS NOVA cycle of the SWR radio in Biberach, Germany in April 2014. The following recording are from the KGNM MusikFest in Cologne 2 weeks later.