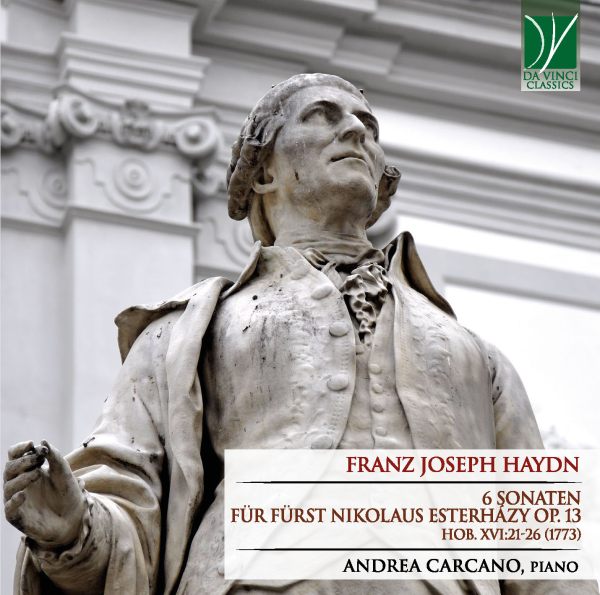 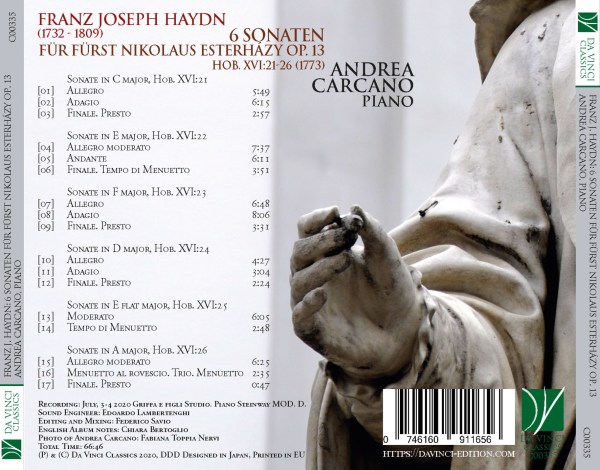 The case of Franz Joseph Haydn’s keyboard Sonatas is rather atypical in the world of classical music. Their composer’s standing among the greatest of all times is undisputable. And keyboard instruments have always and constantly enjoyed great popularity.
Notwithstanding this, only a few of these Sonatas have entered the standard concert repertoire, and the itinerary embracing them all is still an itinerary of discovery for many professional musicians. Indeed, matters are complicated by the disputed authenticity and nightmarish transmission history of many of them, especially as concerns Haydn’s youthful works. Pirate copies circulated widely, and, seemingly, the composer was rather unconcerned by this – in fact, he admitted that seeing handwritten copies of his pieces in the music stores gave him pleasure, regardless of the fact that he received no percentage or remuneration for the fruit of his creativity. It is therefore particularly fortunate that, in 1774, Haydn decided to issue in printing a set of six Sonatas he had composed the year before. As is well known, Haydn spent nearly thirty years of his long life in the service of the noble family Esterházy; while this position gave him economic stability, an excellent orchestra and the possibility of creating numerous masterpieces in a favourable and artistically-minded environment, he had to accept a situation of subordination. It was not just a matter of wearing a livery (something that his younger colleague Mozart would not tolerate); his position as an employee imposed some unpleasant duties on him. As the soloist of this Da Vinci Classics album rightly states, “Only exceptionally Haydn was granted the permission to publish his works. His creations were in fact exclusively destined for the Esterházy court. However, Prince Nikolaus sometimes made exception to the rules, since he had understood Haydn’s genius”. It is unsurprising, then, that the Six Sonatas op. 13 are dedicated to his patron and employer: for Carcano, “this dedication is to be understood as a homage, constructed with the utmost gratitude and attention”.

This set is exceptional under several viewpoints. Notwithstanding their opus number, they are the first published work by Haydn printed with the composer’s authorization. Moreover, as Carcano points out, “On other occasions, albeit rarely, Haydn published sets of keyboard sonatas; however, this is the most organic and carefully designed cycle of all. Certainly none of the six Sonatas was added to a pre-existing group at a later date, and everyone was conceived in such a fashion that it was integrated with the other five. One is reminded of Prokofjev’s project of creating a gigantic Sonata in eleven movements; this design was later modified originating the three ‘War Sonatas’. It is not by chance, indeed, that Prokofjev felt a special predilection for Haydn”.
Clearly, there is a wide stylistic chasm separating Haydn’s classical style from Prokofjev’s modern idiom, even though Prokofjev frequently alluded to classical topoi in his Neoclassical works. Obviously, some of the innumerable differences are determined by the extreme evolution in the keyboard technique and in the structure of keyboard instruments between the eighteenth and twentieth century. In 1773, when Haydn wrote his op. 13, fortepianos were already comparatively common, and several artists were experimenting with their potential for dynamic shading and expressive nuancing. One of them was Carl Philipp Emanuel Bach, one of Johann Sebastian’s sons, and the author of a famous treatise on the art of keyboard playing. Haydn had carefully studied Carl Philipp’s works, both as concerns his theoretical writings and his compositional creations; indeed, being largely self-taught as a keyboard player, Haydn admitted the importance of Bach’s Versuch for his development of a thorough concept of keyboard technique and performance practice. Being so indebted to Carl Philipp, Haydn would certainly have resented the words of a 1784 British review of one of these Sonatas, op. 13 no. 3 (Hob. XVI/23), which stated: “[Haydn] expressly composed [this work] in order to ridicule Bach of Hamburg”. For the reviewer, “the style of Bach is closely copied, without the passages being stolen, in which his capricious manner, odd breaks, whimsical modulations, and very often childish manner, mixed with an affectation of profound science, are finely hit off and burlesqued”. This was certainly not the composer’s intention, and the allusions to Carl Philipp’s style were conceived as homages rather than as caricatures. However, notwithstanding the undeniable presence of traits typical for the empfindsamer Stil championed by the “Bach of Hamburg”, Haydn was careful to avoid extreme expressive indications. As Carcano suggests, “This being a work of 1773, Haydn had certainly conceived it for an unspecified keyboard instrument. The text is exceptionally devoid of indications; there are few articulation marks and just one dynamic sign, a f in the first movement of the second Sonata”. At the time of their creation, preceding what Nikolaus Harnoncourt called “the 1800 watershed”, composers were more interested in noting the “work” than its “performance”; the finer details of instrumental execution, which later musicians would entrust to notation, were still transmitted as part of a shared musical culture and education.

Haydn was building upon this heritage, and enriching it immensely with his own genius: this comprised his contributions to the evolution of the Sonata form, to the development of style and taste, but also to exquisitely instrumental aspects of keyboard technique. By his own admission, Haydn was not a keyboard virtuoso in the same class as Mozart or the young Beethoven: “I was no wizard on any instrument, but I knew the strength and working of all. I was not a bad keyboard player or singer, and could also play a concerto on the violin”, as Haydn wrote to his friend, Georg Griesinger. We should not be misled by Haydn’s characteristic understatements, however. As Carcano affirms, “Haydn was a more proficient pianist than one normally assumes. He demonstrates here a deep knowledge of the possibilities offered by the keyboard instruments. He achieved considerable balance in spite of the great variety and diversity of the musical ideas. Only rarely he employs accompaniment formulas in the style of the Alberti bass. When this happens (as in the slow movements of the third or fourth Sonata), the composer is very careful to give a complete dignity to the left hand in the musical discourse. Generally speaking, the musical movements of the inner parts ground his musical construction”.
These Sonatas do indeed encompass a wide range of emotional situations, techniques, styles and moods, constituting a microcosm of their own. We may find, for example, codified forms such as the Minuet along with movements reminiscent of solemn marches, or Siciliano-style songs; there are brilliant and extremely quick virtuoso passages in demisemiquavers, but also deceivingly naïve moments; there are compositional experiments, such as the insertion of learned polyphony within the context of the normally lighter style galante (indeed, occasionally imitations are explicitly labelled as such, possibly in order to point out their uncommon presence); there are musical jokes, such as the Minuet of the A-major Sonata, which is called “Menuetto al Rovescio”. This bizarre indication reveals this short movement as being a retrograde composition: both the Minuet proper and the Trio are made of two musical phrases, the second of which is coincident with the first, but played from the last to the first note. (In fact, this movement is a transcription of an earlier orchestral piece, the Minuet from Haydn’s own Symphony no. 47).
Indeed, an orchestral concept is frequently discernible behind many of the compositional solutions adopted by Haydn: the great symphonist could not repress his timbral imagination when writing for the keyboard. One might even say that the most interesting and original keyboard solutions were found by Haydn precisely when he was attempting to transfer an orchestral sound on the piano – as happens, for example, with the numerous tremolos or repeated notes found in the first movement of the exquisite E-flat major Sonata, the only one of the series consisting of just two movements.
Several of the slow movements are intimate and lyrical at the same time; among the most beautiful is probably the D-minor Adagio from the D-major Sonata, with its almost pizzicato-like accompaniment and the sighing gestures of the melodic part. Haydn’s typical humour is also frequently found, especially in the quick Finales, such as that of this same Sonata, or the extremely concise concluding movement of the A-major Sonata, which is almost a whirlwind of irony demonstrating the potential of the scales, the simplest elements of musical composition and performance technique.
Taken together, these Sonatas represent an extraordinary repository of musical feelings, ideas, emotions and styles, constituting a mosaic made of self-standing miniatures, in which the beauty of the parts builds the beauty of the whole.

Andrea Carcano, a pupil from Bruno Canino’s piano school, has given concerts at prestigious halls in Italy (Teatro alla Scala, Milan, Auditorium Arvedi, Cremona, Parco della Musica, Rome – on invitation by Michele Campanella to the Maratone Liszt, etc.) and abroad. He recently performed at Weill Carnegie Hall, NY, as a soloist in a Concerto by Bach in 2018, Severance Hall, Cleveland, in one of his US tours, which took in the cities of Cincinnati, Baltimora, Houston; out of US he performed in Dubai (Art Theater), at several festivals in Switzerland, notably Longlake in Lugano, and for a collaboration with Cameristi della Scala at the El Jem amphitheatre, Tunisia. In 2019 he made his Russian debut, in Saint Petersburg.
He recorded for Bottega Discantica and Acam Recording, music by Bach, Beethoven, Liszt, Godowsky, Mendelssohn, Harsany, Françaix, and Bach transcriptions by Busoni (Goldberg Variations and others), Friedman, and Szanto. His in-depth work on contemporary authors like Feldman, Rihm, Benjamin, Larcher, is vigorous and crucial.
Andrea Carcano has played as a soloist for the performance of concertos by Šostakóvić (with OFVG), Cage (Orchestra Laboratorio di Alessandria), Mozart, Beethoven, Czerny (with ACAM), Françaix (with OFV).
He has been a tenured piano teacher since 1995, at Conservatories in Matera, Rovigo, Udine, Alessandria. He is a teacher at the “G.Verdi” Conservatory, Milan, since 2019.

Franz Joseph Haydn (b Rohrau, Lower Austria, 31 March 1732; d Vienna, 31 May 1809). Austrian composer, brother of Michael Haydn. Neither he nor his contemporaries used the name Franz, and there is no reason to do so today. He began his career in the traditional patronage system of the late Austrian Baroque, and ended as a ‘free’ artist within the burgeoning Romanticism of the early 19th century. Famous as early as the mid-1760s, by the 1780s he had become the most celebrated composer of his time, and from the 1790s until his death was a culture-hero throughout Europe. Since the early 19th century he has been venerated as the first of the three ‘Viennese Classics’ (Haydn, Mozart, Beethoven). He excelled in every musical genre; during the first half of his career his vocal works were as famous as his instrumental ones, although after his death the reception of his music focussed on the latter (except for The Creation). He is familiarly known as the ‘father of the symphony’ and could with greater justice be thus regarded for the string quartet; no other composer approaches his combination of productivity, quality and historical importance in these genres. In the 20th century he was understood primarily as an ‘absolute’ musician (exhibiting wit, originality of form, motivic saturation and a ‘modernist’ tendency to problematize music rather than merely to compose it), but earnestness, depth of feeling and referential tendencies are equally important to his art.