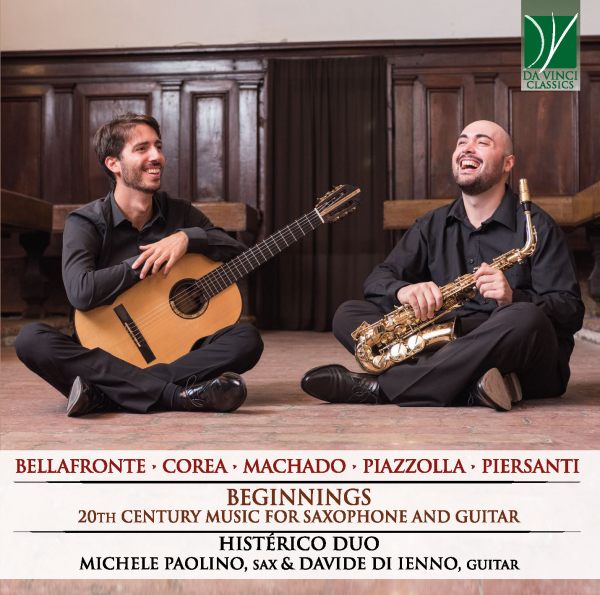 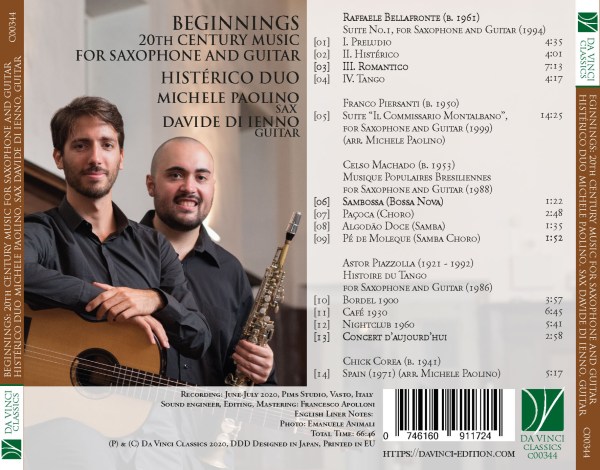 Raffaele Bellafronte (1961)
Originally written for Guitar and Cello, the “Suite No.1” was created thanks to the interaction between Histérico Duo and the Composer. The work germinates from the refined language of Tango, penetrates its workings and gets to its transformation and dissolution. The Tango is the inspiring element, the beginning of a route which temporarily acquires its most common rhythmic, melodic and harmonic patterns. In the Suite’s four movements (Preludio, Histérico, Romantico and Tango) passion, melancholia, mystery, impetus, grief and abandon are experienced with great involvement. But the tango’s stylistic features gradually migrate from the Composer’s mind: it is focused on overcoming them, using increasingly visionary materials. Corporeality is the Suite’s central feature. The sensuousness of dance (and thus of movement) are stubbornly sought-for by the composer, becoming powerful transmitters of emotions. The first movement (Preludio), obscure and enigmatic, and the rude, savage and tumultuous second movement called “Histérico” (which lends its name to this ensemble) flow into a lyrical and passionate third movement (Romantico) and concludes with a final “Tango”, a sensual but sometimes painful closure. The disintegration of the preceding mechanisms, under the obsessive and unpredictable rhythmical and melodical utopia expressed by the two instruments, leads to a kind of physical stunning: the magical ritual of Dance is over. The accumulated tension leaves room to a liberating abandonment of one’s corporeality.

Franco Piersanti (1950), arr. Michele Paolino
The fate of the character created by novelist Andrea Camilleri is a huge and incredible phenomenon. Camilleri found the key for translating into words the images of his Sicily, narrating his point of view through the eyes of a cunning and skilled Inspector. The result is an international success, also due to the movies directed by Alberto Sironi, and inspired by all of the 36 original novels. For this great achievement, an equally astonishing soundtrack is needed; the work of Franco Piersanti is the indisputable continuation of the great tradition of Italian film music composers. The elaboration made for this Duo contains in one shot most of the pieces composed for the entire soundtrack. The score represents almost a challenge for the performers, if one thinks of the masterpiece originally written for Symphonic Orchestra: the results is an efficacious summary of the most important moments, resized for the simpler combination of Guitar and Saxophone.

Celso Machado (1953)
The four pieces excerpted from “Musique Populaires Brésiliennes” by Celso Machado perfectly reflect the variety of Brazilian Music. This guitarist-composer, percussionist and multi-instrumentalist a Brazilian-born Canadian from Riberi Preto, reveals the main aspects of his artistic personality whereby the “serious” musician and the “forever young” are never in contrast. The work originally published by “Éditions Henry Lemoine” is for flute and guitar, textured in a skilful sequence of Bossa Nova, Choro, Samba and Samba Choro. Composed in 1988, it represents the idea of the composer, for whom “Music is first of all entertainment”, in which poetry is expressed through the musical meaning instead of through technical writing. A style mixing jazz with influences from the tropical tradition, i.e. the sounds and the instruments he encountered during his travels. The pieces chosen by the Histérico Duo are “Sambossa” (mix of Samba and Bossa Nova), a Choro dedicated to “Paçoca” (a traditional dessert made of peanuts, manioc flour and sugar), a Samba called “Algodao Doce” and a typically Carioca “Samba-Choro” called “Pé de Moleque”.

Astor Piazzolla (1921 – 1992)
Among the many composition by Piazzolla, “Histoire du Tango” is a passionate tribute to the traditional music of Argentina. The work is textured as a kind of encryption of different stages in the evolution of the Tango development, without forsaking the Composer’s stylistic marks. It certainly represents one of the many witnesses of his love for his roots and for tradition, elements seemingly distant from his own musical needs.
The chronological path together with the different locations chosen for each movement make this four-part composition a genuine masterpiece. Starting from “Bordel 1900”, a really bright music, almost flirty, in the style of the original Milongas or “Tango Spiritoso”, it reaches a completely opposite dimension, that of “Cafè 1930”, set in a rather dark and miserable atmosphere marked by a sense of sorrow, a melancholic reminder of better times. Suddenly, “Night Club 1960” emerges with its complex dimension of ostensible fun mixed to a strong musical personality – interrupted by a window of real hope with the tune in the major mode –; it is a perfect musical example of Piazzolla’s contribution to this genre.
The itinerary finally reaches the desperate, deranged and sometimes aggressive mood of the last movement, the modern “Concert d’Aujourd’hui”, a hidden dedication to the great 20th century composers which Piazzolla admired most fervently– especially Stravinsky and Bartók. In order to find solutions for a repertoire that actually seems to be unattainable , this work, originally written for guitar and flute, represents the easiest way to get in touch with the great language of the Genius, keeping the original keys and transferring the wind part to a Soprano Saxophone.

Chick Corea (1941), arr. Michele Paolino
This is one of the most popular pieces written by the American jazz pianist and composer Armando “Chick” Corea. Composed in 1971, it appears in its original version in the album “Light as a Feather”. Together with Corea and his Fender Rhodes ensemble were Airto Moreira (Drums), Flora Purim (Voice and Percussion), Stanley Clarke (Bass) and Joe Farrell (Flute).
The piece opens with an introduction representing a reference to the second movement of “Concierto de Aranjuez” for Guitar and Orchestra by Joaquin Rodrigo; this choice is clearly inspired from the album “Sketches of Spain” by Miles Davis, opening with a marvellous arrangement by Gil Evans.
Corea “plays” with the tune, extending it and inventing some melodies which later would become the main themes of the song. Then, the original section of work begins with a Latin Mood pervading the whole exposition, while giving space to some solos as usually happens in the jazz tradition.
In consequence of the period he shared with Davis, Corea brought this inspiring experience into the different arrangements he made during his career. In his own words: “Miles set this example of creative fearlessness. He kept changing the way he played. He kept changing the poem of his music. Now, when I play soul piano, for instance, and I play a rendition of Spain, I do it deconstructively. That’s the most fun”.
The particular arrangement written for this Duo is the result of many listenings, especially as concerns the version by Chick Corea and Peter Sprague for the GRP All Star Big Band.

Davide Di Ienno: Graduated with full marks and honors from the conservatories of Avellino and Campobasso, he also achieved the highest score at Koblenz International Guitar Academy, under the guidance of M° Aniello Desiderio. In 2015 he recorded his first CD, “Guitar Works” - published by Tactus, that includes most of the music for Guitar written by Raffaele Bellafronte. He has performed as soloist with many prestigious orchestras: the "Oltenia Philharmonic Orchestra of Craiova", the "Odessa Philharmonic Orchestra" conducted by Hobart Earler, the "Kyiv Soloists" conducted by M° Vito Paternoster and the "Staatsorchester Rheinische Philharmonie" directed by M° Garrett Keast. In 2016, he performed as soloist the world premiere "Suite n. 2" for guitar, bassoon and string orchestra, composed by M° R. Bellafronte. The tour, culminated at the Brahms-Saal of the Musikverein, in Wien, saw the participation of the Wiener Concert-Verein and Patrick De Ritis, directed by M. Ulf Schirmer. Davide has performed in prestigious theaters such as the Lysenko Hall in Kiev, the Rhein-Mosel-Halle in Koblenz, the Auditorium of Renzo Piano in L'Aquila, the Court Theater of Palazzo Reale in Naples, the Sala Verdi in Milan, the Social Theater of Sondrio, and the Vittoria Theater in Rome. He also experienced important concerts abroad: France, Austria, Germany, Malta, the Republic of San Marino, Portugal, and Ukraine. In September 2017, he had the honor to perform at the XXII International Guitar Conference in Alessandria, at "Michele Pittaluga" Auditorium.

Michele Paolino: He received his graduation cum Laude at the “U. Giordano” Conservatory of Foggia in 2011, at the age of 21, under the guide of M° Gabriele Buschi. During his studies, he participated to many musical competition which gave him 15 first prices in Chamber Music categories. After this period, he collected cum Laude the Master Degree at “G. Rossini” Conservatory in Pesaro, with international soloist M° Federico Mondelci; this meeting allowed him to start collaboration with many international performers. The great quality as interpreter has been acknowledged and underlined by important Orchestras that engaged him in many projects far from Chamber Music: in 2013 on stage with FORM (Regional Orchestra of Marche) for the “Blue Rhapsody” production; in 2018 with the prestigious Orchestra del Teatro alla Scala, during the “Mahler 10 – Petite Mort – Boléro” production, scheduled on the Ballet Season. Nowadays he continues his career as soloist and chamber musician, especially as member of the Italian Saxophone Quartet, performing for the most important Concert Seasons all over the world (USA, Russia, Austria, France, Germany, UAE, China) and of the Histérico Duo, together with the guitarist Davide Di Ienno, collecting success in the whole Italian Country due to an original and refined repertoire. Meanwhile, he’s involved in musical activities as transcriptions and arrangements for many kind of groups. His works are routinely presented in records and international concerts.

Raffaele Bellafronte studied piano with Lucia Passaglia, composition and analysis with Firmino Sinfonia, Giampaolo Chiti and Fulvio Delli Pizzi. After many years of research and experimentation in the recording studios, Bellafronte’s work has progressed from a model whereby ideas are expressed, achieved, proposed in their final definitive mode via audio supports to one wherein the composer re-traces and re-elaborates the compositional strategies of previous centuries into new and exciting music. Much of his work has been published with d’Oz, Bèrben, Bongiovanni, Curci, Carisch, Da Vinci Edition and RAI Trade. His work continues to cross national borders.