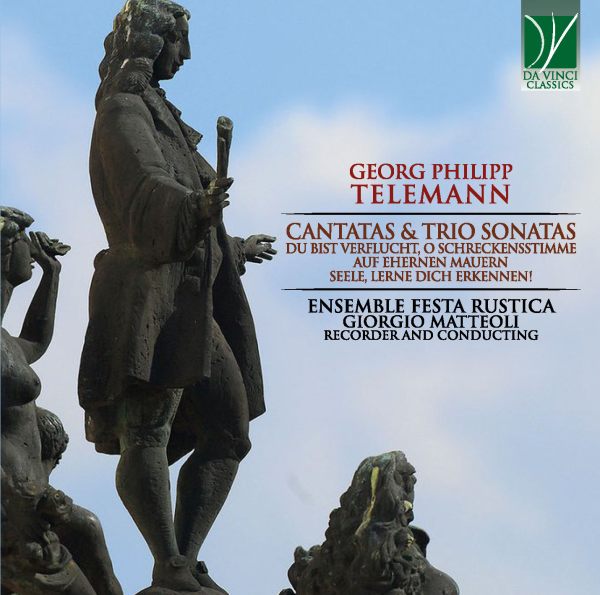 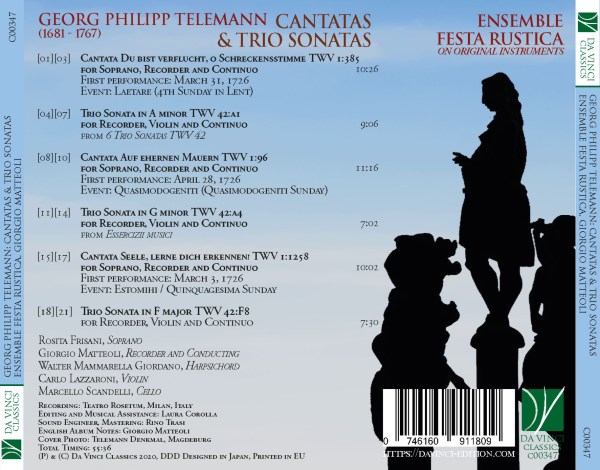 The genre to which Telemann owed his success as a composer among his contemporaries was the art of the Triosonata. Telemann’s chamber music in general, and his works for trio in particular, met with universal approval: as he himself liked to recall – this success, ” flattered me also by affirming that I had given my very best “.
The composer himself, in his thoughts, posited the reasons for such good fortune, stating that he had elaborated the three voices “in such a manner that the second part is as important as the first, and the bass follows a natural line … so that each note is precisely as it should be …”. The Cantatas by Telemann presented in this recording, excerpted from the collection of 72 cantatas published in Hamburg between 1725 and 1726 (Harmonischer Gottesdienst oder geistliche Cantaten zum allgemeinen Gebrauche), fit perfectly into the art of composition for trio. Indeed, they are conceived with so dense a dialogue between voice and obbligato instrument (violin, oboe, traversiere or recorder) that a purely instrumental performance becomes possible.
Therefore, in the same Preface to the original edition, Telemann affirmed that not only the flute, but even the voice itself could be replaced by an oboe or a violin, in order to transform the cantatas into real Triosonatas with the suppression of recitatives. By reading the complete translation of this work’s title and by considering the small ensemble (a single voice, an obbligato instrument and continuo) needed by these cantatas, one understands the for its genesis. “Harmonious Divine Service, i.e. spiritual Cantatas for general use, or for supporting worship in homes or churches”. Their destination was therefore conceived for domestic use and for private ceremonies rather than for actual public liturgical occasions.
At the time of his appointment as a conductor in Hamburg, the composer was certainly pressured by the numerous requests of his noble admirers and amateurs. Through the publication of this collection, he sought to offer a homogeneous cycle of cantatas on a moral topic, following step by step all the festivities of the liturgical year. At the same time, he endeavoured to continue – in a more agile and “everyday” fashion – a genre of sacred vocal music which had brought him so much fortune and fame since the time of his service at the court chapel of Eisenach, and then of his assignments in Frankfurt (1712), making him the most famous and sought-after composer of his period.

Telemann took particular care of the homogeneity of this corpus of chamber cantatas: within the 1750 sacred compositions he wrote during his life, they still remain among his best known and frequently performed works. Not only did he give to them all the same formal structure, but he sought to collaborate, throughout the writing of the cycle, with the same author, i.e. Matthäus Arnold Wilkens. Telemann never met Wilkens personally but he immensely admired his poetic vein.
Indeed, Telemann wrote “the reason for this [the conception of this cycle of cantatas] is once again the supply, by Mr. Weichmann, of a poetic text which, in addition to all its very high qualities, has the advantage not only of making my work pleasant, but of inspiring me to create every vital musical artifice, for which I wish to express all my infinite gratitude to the author in public which I personally do not know” (Hamburgisch Correspondenten 19 December 1725).
However, it is precisely in Telemann’s painstaking attention to all the nuances of the text that the innovative Italian character of these compositions is found, well beyond his formal adoption of the da-capo aria structure and of the succession of aria-recitative-aria. This turning point followed Telemann’s meeting, before his assignment in Hamburg, with Erdmann Neumeister. Neumeister promoted the “madrigal” genre and the Italian chamber cantata in Germany, and precisely against the local models. Among the many possible examples of these Italianate rhetorical effects cantata Seele, lerne dich erkennen!, where the artificial human ingenuity of the first aria (represented by the perpetual and almost mechanical motion of the flute’s arpeggiated sixteenth-notes) is immediately contrasted with its extreme weakness, and with its limitations in understanding the complexity of the divine plan.
These limits (corresponding to the adjective “zu schwach”, “too weak”), are well represented by the breathlessly interrupted and sobbing figuration with which the sung melody is articulated. In the second aria of the same cantata, the fullness of divine knowledge is admirably expressed by the joyful and serene pacing of the theme, presented in the major mode, and by the harmonic fullness of the sparkling complete arpeggios by the obligato instrument, found as a coda following the melody itself.
Likewise in the beautiful and very dramatic cantata Du bist verflucht, o Schreckensstimme, the cursed and blasphemous word is pointed out. In correspondence with the noun “Schrekensstimme” (terrifying voice) is found the most dissonant possible interval existing in music, namely a diminished octave.
Finally, in the last aria of this same cantata, the divine wrath is admirably translated into a thunderous war between voice and recorder: an effective and “noisy” musical painting, which efficaciously describes the outbreak of deadly lightning bolts and the crumbling of the hills.

The Triosonatas presented in this recording are naturally also an evident essay of Telemann’s compositional genius in the art of composition for trio. Of the three Triosonatas TWV 42 (42: a1 in A minor, 42: F8 in F major and 42: G9 in G minor), only the first two are written for recorder, violin and continuo.
The sonata in G minor is actually written for recorder and for an instrument other than the violin: the pardessus de viole, or the soprano viola da gamba; however this rather uncommon instrument is normally replaced in concert and in recordings by the violin, as probably happened already at Telemann’s time.