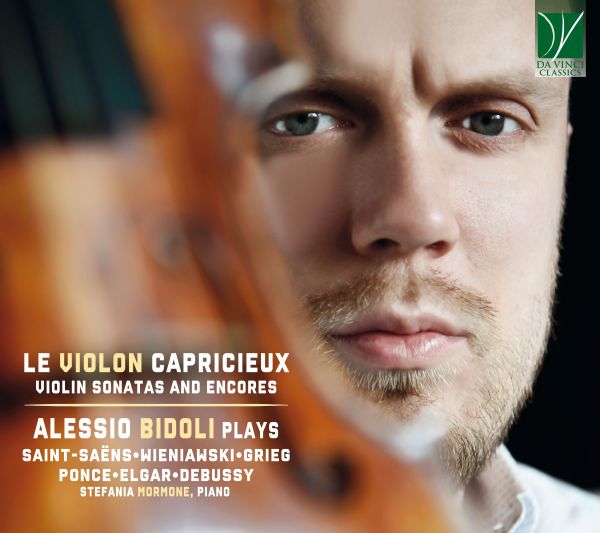 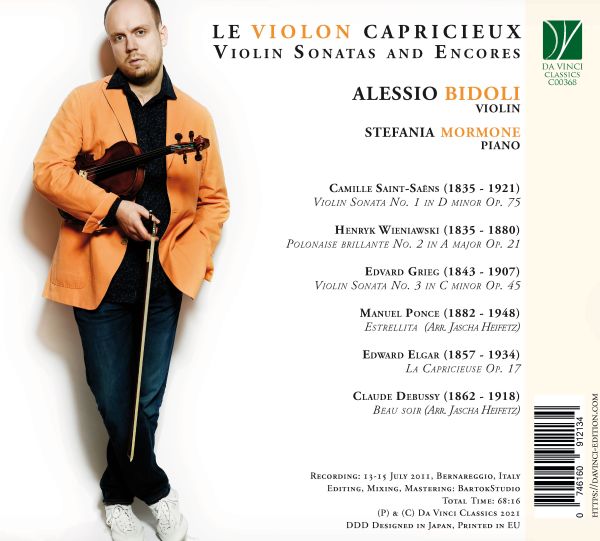 Alessio Bidoli (Milan 1986) started his violin studies at the age of seven.
In 2006 he graduated with honours from Milan's Conservatorio "Giuseppe Verdi" under the guidance of Gigino Maestri.He improved his studies at the Haute Ecole de Musique au Conservatoire de Lausanne, Switzerland and Mozarteum Salzburg with Pierre Amoyal, at the Accademia Chigiana of Siena with Salvatore Accardo, and at the Imola International Academy with Pavel Berman and Oleksandr Semchuk.
He performed for the first time as soloist at Teatro Signorelli in Cortona, Tuscany, at the age of seventeen. In 2005, he was among the prize-winners at Rassegna Nazionale d’Archi in Vittorio Veneto In 2007 he collaborated with the Lausanne Camerata directed by Pierre Amoyal in various European cities including Martigny at the Fondation Pierre Gianadda, Milan at the Società dei Concerti and Marseilles during the Festival de Musique à Saint-Victor.
As a soloist he has performed in prestigious concert seasons, including: MITO Settembre Musica, Società del Quartetto and Società dei Concerti of Milano, Furcht-Bocconi University, Amici del Loggione del Teatro alla Scala, Fondazione Musica Insieme di Bologna, Amici della Musica di Sondalo, Arvedi Auditorium in Cremona, Bergamo Culture Festival.
He had a leading role with Vittorio Sgarbi at the Teatro di Chiasso, Switzerland, in the theatre project Il Fin la Maraviglia, a report about the Baroque age through images and sounds.
He has recorded a CD with the pianist Stefania Mormone for the magazine of classical music Amadeus and four CD albums as a duo with Bruno Canino. For Sony Classical have been recorded: Verdi Fantasias, a CD with fantasias by Camillo Sivori and Antonio Bazzini (recently reissued by Concerto Classics), and Italian Soul- Anima Italiana, a collection of works by Malipiero Petrassi and Alfredo Casella, most of which previously unrecorded. For Warner Classics has been recorded a CD with music by Stravinsky, Prokofiev, Ravel, Poulenc, released in October 2018, consisting of the complete violin and piano works of Saint-Saëns, including a first recording of his youthful E flat major sonata (R103). In 2020, a new monographic CD containing the chamber repertoire of Nino Rota, again with Bruno Canino at the piano and Massimo Mercelli on the flute, was recorded for Decca.
He has appeared as a guest artist in radio broadcasts on Radio France, NDR Kultur, Radio Svizzera Italiana, RAI Radio 3, Radio Vaticana, Radio Classica, and Radio Popolare.
He taught for two years at the Conservatorio Niccolò Piccinni in Bari. He is currently a violin teacher at the Conservatorio Francesco Cilea in Reggio Calabria.
Alessio Bidoli plays one of the violins made by his grandfather, Dante Regazzoni, who was one of Lombardy most famous violin-makers of the twentieth century. He also plays a violin made by Stefano Scarampella in 1902.

Stefania Mormone, graduated at Piacenza Conservatory with Alberto Colombo and got full marks and honours, later she perfected herself with Aldo Ciccolini and Nikita Magaloff. She went in many tours in Europe and around the world with orchestras such as Solisti Veneti, Santa Cecilia Chamber Orchestra, Archi della Scala, Stuttgarter Kammerorchester and has collaborated with internationally renowned soloists – among whom Pierre Amoyal, Uto Ughi, Leonidas Kavakos, Natalia Prischepenko , David Geringas, Enrico Dindo, Francesco Manara, Stanislav Bunin. In duo with Sergej Krylov she got a great approval by critics and audience at the Teatro alla Scala-Milan, at the Musikverein-Vienna, at the Radio France Auditorium in Paris, at the Megaron in Athens and during her tours in Japan and the United States of America. She has to her credit two recordings as a soloist: the first one with music by Brahms and Ravel, the other one "live" with Ravel's concert in G. In duo with Sergej Krylov she has recorded numerous CDs for EMI and Agorà; for the Amadeus magazine, a CD with the violinist Alessio Bidoli.
She teaches Piano Practice and Reading at the “G. Verdi” Conservatory in Milan; in 2017 she taught at the World Music Laboratory of the University of Milano Bicocca. At the moment she is actively collaborating in the World Music Laboratory initiatives of the Conservatory of Milano, in collaboration with Alberto Serrapiglio.

Henryk Wieniawski (b Lublin, 10 July 1835; d Moscow, 31 March 1880). Violinist and composer. The most celebrated member of the family, he was the son of Regina Wieniawska (née Wolff), a professionally trained pianist and the sister of the noted pianist Edouard Wolff. Henryk’s exceptional talent for the violin was discovered very early by his first teacher, Jan Hornziel, who had moved to Warsaw in 1841 to become leader of the opera orchestra, and Stanisław Serwaczyński. When the Czech violinist Panofka visited Warsaw and heard the eight-year-old boy play, he exclaimed: ‘He will make a name for himself’. After playing a brilliant audition for the Paris Conservatoire in the autumn of 1843, Henryk was admitted to the class of J. Clavel and was transferred to the master class of Lambert Massart a year later. He was awarded first prize in the violin in 1846 and studied two more years as Massart’s private pupil. After a concert in Paris on 30 January 1848, at which Henryk was assisted by his younger brother (2) Józef Wieniawski at the piano, Henryk departed for St Petersburg, where he gave five successful concerts and earned the praise of Vieuxtemps, at that time solo violinist at court. In 1848 Henryck played in Helsinki, Riga, Vilnius, Warsaw, Dresden and Breslav (now Wrocław). In the autumn of that year he Henryk returned to Poland, where he became friends with Moniuszko. By that time he had begun to compose and felt the need for further study; he re-entered the Paris Conservatoire in 1849 to study harmony with H. Collet. In 1850 he was made an honorary member of the Societé Philharmonique and received the Cercle-des-Arts.

Manuel Maria Ponce: (b Fresnillo, Zacatecas, 8 Dec 1882; d Mexico City, 24 April 1948). Mexican pianist and composer. He was the leading Mexican musician of his time, and made a primary contribution to the development of a Mexican national style – a style that could embrace, in succession, impressionist and neo-classical influences.

Sir Edward Elgar: (b Broadheath, nr Worcester, 2 June 1857; d Worcester, 23 Feb 1934). English composer. His abundant invention, largeness of vision, and strength and singularity of musical character place him high among European Romantic artists and at the peak of British music of his time. He drew inspiration from the culture and landscape of his own country, resourcefulness from the study of his continental colleagues; and contributed to all the major forms except opera, creating a significant body of symphonic literature, the finest oratorio by an Englishman, and in his popular music a style of direct national appeal.