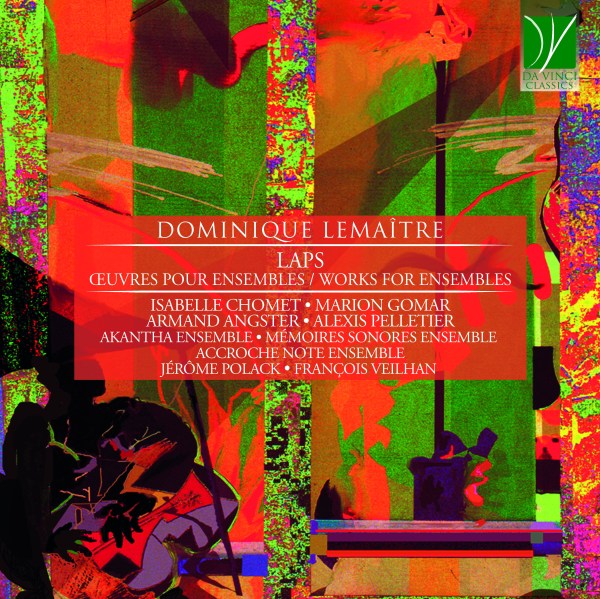 This present album gathers works written by Dominique Lemaître in the 2010’s. Recorded live, the selection of opuses summons formations from quintet to sextet. Nomenclatures leading to the threshold of an « extended » chamber music give the discographic unit a paradoxical feeling of heightened intimacy. Composed in memory of Félix Lechevalier, Stèle (2018) for two sopranos, bass clarinet, percussion and guitar refers to the symbolic image of a « talking stone ». Relating to the kingdom of Mnemosyne and Thanatos, the piece skillfully mingles voice and instruments. With five patterns linked together, the score originates from an exerpt of a text by Simonide de Céos (greek poet from the VIth and Vth century BC) and on the incipit of the famous Mille regrets by Josquin des Prés (polyphonic song from the Renaissance published in 1549). Like a chorus with a ghostly appearance, the josquinian variation gradually reveals itself when finishing each pattern, giving this « musical stele » the formal appearance of a rondo. Khronos, hommage à Stephen Hawking (2019) is writtenfor guitar and six instruments: flute, clarinet, percussion, violin, viola and cello. Like Orange and yellow, hommage à Morton Feldman (2009) for two violas, Séléné, homage à Maurice Ohana (2014) for two guitars or Stances, hommage à Henri Dutilleux (2015) for cello and piano, this septet is indeed paying tribute to the famous British physicist and cosmologist Stephen Hawking (deceased in 2018). In the Greek Antiquity, scientists used to distinguish three different kinds of time: « Kairos » the appropriate time, « Aiôn » the time of long cycles or of eternity, and « Khronos » the physical time, the quantitative and linear time that can be divided in seconds, minutes, hours, etc. Here, the music with changeable contours alternately unfurls through a smooth time, a streaked time, a suspended time… In this composition that folds into five panels, displayed end to end, without challenging the six strings instrument, doesn’t the percussion seem to reflect the expression of Zeus or even of Thor, two deities related to thunder? Conceived for soprano, alto flute, English horn, cello and piano, Laps (2015) is made up of three uninterrupted « periods » during which wind instruments and cello combined with voice (using phonems), are entwined to overlap or fade out. Draped with smooth sonorities and tinged with warm tones, the music course is wreathed by pianistic interventions used as «beacons ». Like an initiator scouting around, the keyboard player galvanizes the whole, systematically smashing the sustaining pedal. We should bear in mind that the lapsus temporis meant, in the IVth century, « any movement gliding, flowing fast ». Later, only the notion of « space of time » will be reminded. Reminiscent of the instrumental layout of Novae (2002) for eight instruments, Liens d’espace (2011) spatially stages a central clarinet and, on both sides of the soloist, two trios: vibraphone, marimba, harp and viola, cello, double bass. Resonance games, overlapping shifts, transmitted polarities or energy exchanges nourish six connected patterns. The clarinet, caressing at times, awaiting at other times, can be outstandingly eloquent thanks to a propulsive outburst of virtuosity. It can even embrace some solo cadenzas within a sound dramaturgy with sometimes abrupt caesuras. Four lines by Paul Valery spangle the score with an exclamatory tint: « Patient, patience, / Patience in azure skies! / Each atom of silence / Is the good fortune of a ripe fruit! ». Presented as a monodrama originating from a poem by Alexis Pelletier Les Moires (2017) score is written for a narrator, three sopranos (choristers) and six instruments: flute(s), clarinet(s), percussion, harp, viola and cello. What do these creatures that Latins called the Fates foment? United under the domino of the one and the multiple, the Moires are three sisters: Clôthô, Lachésis and Atropos. They have the ability to grant each mortal with a measure of life which precarious duration they decide on. The first one spinning the wool (this is birth), the second one winding the thread (this is the course of life), the third one cutting it (this is death). Sometimes blurred by soft timpani rolls, sometimes illuminated by brilliant harp glissandos, the music is used as a colourful background to the contemporary tale. Like an inexpressibly discreet scenery, incarnated by the right balance of the pairs flute/clarinet and viola/cello, it helps bending the word and curbing the phrase (unless it could be the opposite). In these five pieces, soprano and narrator voices, rubbed and plucked strings, woods, piano and percussion are meant – as Dominique Lemaître always does – to serve a sensitive poetry with an inspired structure. In Les Moires and in Laps, instruments and voices mingle to merge into an incredible morphing, ceaselessly providing a feeling of indefinable mystery (as Paul Valery would say it). Sometimes, visiting the many folds of a « sound archeology » (be it imaginary or not like in Stèle), snatches of antique songs, forgotten or lost, seem to emerge from the moving sound matter (Laps). In this trail, shall we note this archaic scent of greek music that is constantly fragrant throughout all the introductory bars of Les Moires? Besides, apart from a few affective intentions respectively adressed to Simonide de Céos, Stephen Hawking, Félix Lechevalier, Alexis Pelletier… the conoisseur will notice the special « offering gesture » aimed at the two soloists (the guitar player Isabelle Chomet and the clarinet player Armand Angster), a praiseworthy and generous attitude that endows the scores of Khronos and Liens d’espace with an actual « concertante » outline. Finally, metaphorically speaking, if the link with the time apparatus is fundamentally endorsed by Khronos, by Laps and by Les Moires, on the other hand, the angels’share relating to the space parameter is represented in various ways by Stèle and by Liens d’espace. As Paul Valery would put it in his Cahiers, music remains a « series of bridges flung over time ».

Laps (2015), dedicated to Linda Di Martino Wetherill and the Bach and Forth Ensemble.
World Premiere in New York on May 21, 2015 by Trudy Craney and the Bach and Forth Ensemble (artistic director Linda DiMartino Wetherill).
French first performance in Vigneux-sur-Seine on May 20, 2016 by Marion Gomar and the Mémoires Sonores Ensemble.
Recorded in concert on April 30, 2017 in Etoutteville (Manoir d’Etainnemare) as part of the festival Terres de Paroles.
Marion Gomar (soprano) and the Mémoires Sonores Ensemble: François Veilhan (alto flute), Corinne Jobard (english horn), Brigitte Trannoy-Petitgirard (piano) and Isabelle Veyrier (cello).

Accroche Note Ensemble: Ensemble Accroche Note is a group of soloists formed around Françoise Kubler (soprano) and Armand Angster (clarinetist). It invests in a multiple way the repertoire of today's music. Each program decides the personality and the number of musicians that make up the ensemble. The flexibility of its membership - from solo to chamber ensemble - allows it to tackle in different projects the instrumental and vocal literature of the 20th century and today, as well as improvised music. For several years now, the ensemble has been developing a policy of commissions and works in close collaboration with composers. The ensemble is regularly invited to participate in many national musical seasons as well as in major international contemporary music events.

Akhanta Ensemble: This variable geometry formation dedicated to today's music was created in 2019 by guitarist Isabelle Chomet. It brings together mostly musicians from the Hauts de France, joined by a few Parisian or Norman performers. Combining voices and instruments, two first concerts were given in Honfleur in September 2019 as part of the Journées Européennes du Patrimoine with the creation of the work Khronos, hommage à Stephen Hawking for guitar and six instruments by Dominique Lemaître.

Alexis Pellettier: Alexis Pelletier's writing develops in various directions that may one day meet. Since 2006 Alexis Pelletier has been working regularly with the composer Dominique Lemaître on what they call "Poetic Concerts" which they have put together with different formations: from the Ensemble Orchestral Contemporain to the Stravinsky Ensemble, the Ensemble Accroche Note and the Campsis Ensemble. His poetry is also concerned with being attentive to an era that is sometimes difficult to grasp. Alexis Pelletier published a book of interviews with one of the founders of the new novel, Claude Ollier, in 1996, published by the P.O.L. Editions.

François Veilhan: Flutist Francois Veilhan has a soloist's career marked by numerous creations, and influenced by a continuous work with today's composers. He founded the Campsis ensemble, four variable geometry flutes. The duo he forms with percussionist Bernard Heulin is the dedicatee of numerous scores, as is the one he forms with pianist Brigitte Trannoy-Petitgirard. His ensemble Mémoires Sonores brings together woodwinds, percussions, strings, keyboard and voice. He recorded the disc Pulsars (ESADHaR production) around the flute music of Dominique Lemaitre and participated in the work Du silence et de quelques spectres by Alexis Pelletier and Dominique Lemaître published by Clarisse Editions.

Isabelle Chomet: Holder of national and international awards, Isabelle Chomet decided in the early 90s to form a guitar duo with Bertrand Cazé in order to share with the public her enthusiasm for the popular and contemporary Latin American repertoire. The duo is invited by prestigious festivals in France and abroad. At the same time, her discography, published by Mandala/Harmonia Mundi, has been praised by the press and radio stations (Diapason, Les Cahiers de la Guitare, Classical Guitar, The Horn Call, France Musique, Catalunya Musica ...) Throughout her career, Isabelle Chomet encourages openness and discovery, notably through the creation of contemporary pieces at various events and within the Guitares de France orchestra. Recently she founded the Musarthe association and then the Akantha ensemble and participates in numerous projects in collaboration with Dominique Lemaître.

Jérôme Polack: Jérôme Polack was initiated at a very young age, within a master's degree, to the practice of singing and continued in Paris to study piano, organ and then choral conducting. He chooses to specialize in conducting and is admitted to the Musikhochschule of Munich where he obtains his advanced diplomas in choral conducting from Michael Gläser and in orchestral conducting from Bruno Weil's class. As a conductor he is invited to conduct major works by Mendelssohn, Verdi and Schumann. In 2010, he approaches the contemporary repertoire with the instrumental ensemble Ars Nova alongside Philippe Nahon, and he becomes his assistant. His passion for vocal art led him to found, in 2011, the Ensemble Exprîme, a professional chamber choir and soloist choir specialized in the diffusion of choral repertoire from the 19th century to the present day. In 2019 Isabelle Chomet entrusted him with the musical direction of the Akantha ensemble.

Marion Gomar: Marion Gomar is a graduate of the CRR of Boulogne (prof. Blandine de Saint-Sauveur) and of the Hochschule of Leipzig (prof. Regina Werner). In 2014, she wins the 2nd Prize in the Clara Schumann’s duet competition and participates in the Masterclass Udo Reinemann of International Song at La Monnaie in Brussels. In France, she performs several times to The Royaumont Festival, in the role of Tatiana in Tchaikovsky's Eugene Onegin. She perfects her skills in the art of melody and sings with Françoise Tillard. She is a soloist for the Festival Terres de Paroles around the works of the contemporary composer Dominique Lemaître and Ravel's Chansons Madécasses, in Beethoven's Mass in C and in Dvorak's Stabat Mater.

Mémoires Sonores Ensemble: The ensemble Mémoires Sonores is gathered for associative actions designed by the flutist François Veilhan. It can be composed of strings, woodwinds, percussions, keyboards, voices... This ensemble performed at the Journées Charlotte Delbo in Essonne (French creation of Laps with Marion Gomar) in 2016 and at the Festival Terres de Paroles 2017 and 2018 (world creation of the monodrama Les Moires with Alexis Pelletier).