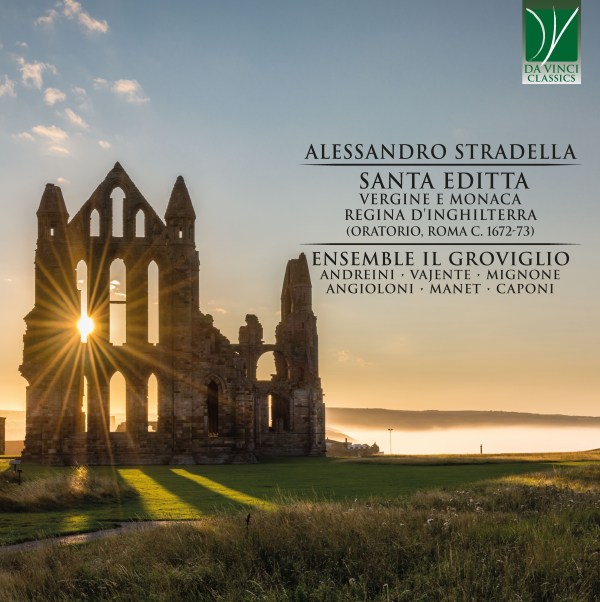 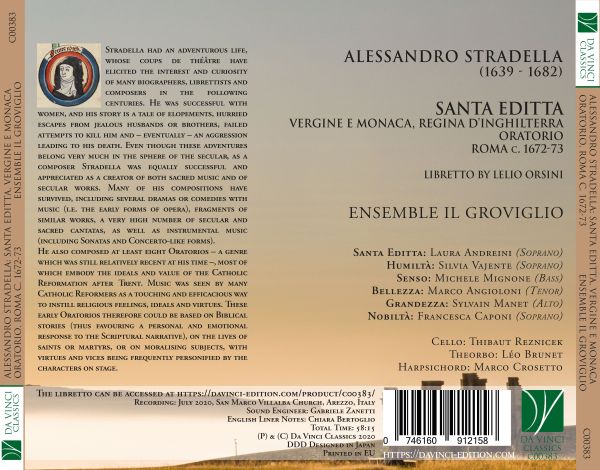 Ensemble Il Groviglio An entanglement of ideas, sonorities and multifaceted personalities. A vibrant interweaving of pinched and caressed strings, centered on baroque music, that brings together musicians from Italy, France and everywhere. This is the ensemble “Il Groviglio,” made up of young musicians trained in Europe’s best conservatories (Paris, Florence, Basel, Versailles). Since the beginning, the ensemble has explored on 17th and 18th century Italian repertoire and focused on some lesser-known composers such as Francesco Provenzale, Alessandro Stradella or Antonio Draghi. The ensemble was appeared at numerous international Festival such as le Petit Festival de Bretagne, the Festival Marin Marais, the Festival de Musique ancienne de Vanves and the Festival Baroque de Pontoise. Il Groviglio's last engagements include the Stradella’s oratorio Santa Editta for the first modern world premiere in some Swiss and French Festivals.

Alessandro Stradella: Stradella came from a noble family originally of Fivizzano in Tuscany; when his great-uncle Alessio became Bishop of Sutri and Nepi, the family moved south. Alessandro’s father Marc’Antonio was a member of the Cavalieri di S Stefano, a prestigious military order founded in Pisa by the Medici. During the War of Castro he became vice-Marquis of Vignola, and it is possible that in 1642–4 Alessandro lived there with his family. From 1653 to 1660, after the death of Marc’Antonio, Alessandro lived with his mother and brother Stefano in the Lante palace in Rome, where he served as page. The first notice of Stradella as a composer is from 11 March 1667 when a Latin oratorio by him was performed for the Arciconfraternita del SS Crocifisso. He soon began to receive commissions from the Venetian Polo Michiel, and by the beginning of 1668 had composed the prologue ‘O di Cocito oscure deita’ (text by G.F. Apolloni) for Jacopo Melani’s comic opera Il Girello, one of the most frequently performed operas of the century. The next collaboration between Stradella and Apolloni was the serenata Se desio curioso (La Circe), presented on 16 May 1668 at Olimpia Aldobrandini Pamphili’s palace in Frascati to celebrate Leopoldo de’ Medici’s investiture as cardinal. Stradella’s family connections gained him access to noble patrons but, although he received commissions from Rome and Venice, payment was not prompt, and he found himself in financial difficulty. On 27 November 1670 he asked his patron Cardinal Flavio Chigi for a large loan. The outcome is not known, but Stradella began to collaborate with the new Teatro Tordinona, composing prologues, intermezzos and substitute arias for the 1671–2 seasons.

During his Roman years Stradella continued to compose oratorios, now in Italian, such as S Editta, vergine e monaca and Ester, liberatrice del popolo ebreo, both to librettos by Lelio Orsini. In Autumn 1671 he wrote the cantata L’avviso al Tebro giunto to celebrate the marriage of Anna Teresa Pamphili Aldobrandini and Prince Giovanni Andrea Doria of Genoa. August 1674 saw the performance of the serenata Vola, vola in altri petti, commissioned by Prince Gaspare Altieri to be performed before Christina of Sweden; it is the earliest datable composition known to employ concerto grosso instrumentation. On 28 January 1675 Stradella’s motet Pugna, certamen was heard in the church of SS Domenico e Sisto for the investiture of Angelica Lante as a nun; it too was scored for a concerto grosso ensemble. Another work with the same instrumentation was heard on 31 March: the oratorio San Giovanni Battista, commissioned by the Venerabile Compagnia della Pietà. Also in 1675 Stradella’s abilities were recognized by Pope Clemente X, who made him an honorary ‘servant’. It was about this time that Queen Christina wrote a detailed scenario which Baldini elaborated into verse and Stradella set to music as the serenata Il Damone; it also employed concerto grosso instrumentation.

Although not precisely datable, several cantatas are shown by their texts to have been written during Stradella’s years in Rome. The cantata Ecco Amore ch’altero risplende celebrated the wedding of Anna Altieri to Egidio Colonna on 14 June 1676. The first mention of Stradella’s instrumental music was made shortly after, in a letter of July 1676, when a sonata (perhaps for concerto grosso) was commissioned by Polo Michiel. In the autumn Stradella corresponded with the Venetian on the question of whether it was advisable for him to leave Rome. Together with the castrato Giovanni Battista Vulpio, he had contrived to get 10,000 scudi from an ‘ugly and old’ woman to arrange her marriage to a relative of Cardinal Cibo, the papal secretary of state. The culprits were threatened with imprisonment, and Stradella left for Venice at the beginning of February 1677. There both Polo Michiel and his brother Girolamo requested his music. There was mention of Stradella composing an opera for the Teatro di SS Giovanni e Paolo to a text by Gianfrancesco Saliti, possibly for Carnival 1678, but nothing seems to have come of it. We do know, however, that Alvise Contarini asked him to teach his mistress Agnese Van Uffele, and that she and Stradella left Venice together in June 1677 and went to Turin, from where Stradella was brash enough to ask Polo Michiel for letters of recommendation. When, less than a month later, Contarini arrived in Turin, Agnese entered the convent of S Maria Maddalena and Stradella that of S Domenico. Contarini departed, but instructed the archbishop that the girl should marry Stradella or take the veil. Succumbing to pressure, Stradella agreed to marry Agnese, and on 10 October 1677 he signed the marriage contract. While walking away from the convent, however, he was attacked from behind and left for dead. The two henchmen found asylum in the palace of the French ambassador. (Through all this, Stradella succeeded in promoting his music: the cantatas Se del pianeta ardente and Sciogliete in dolci nodi refer to the regent, Maria Giovanna of Nemours.)

There followed an international ‘Stradella affair’. Maria Giovanna put Agnese’s father in prison, objected to ‘foreign’ powers entering her territory and wrote to Louis XIV complaining about his ambassador’s behaviour. It was affirmed by various court representatives that the henchmen had been hired by Contarini, and in the end France and Savoy used the affair to settle another diplomatic problem. By November Stradella had recovered and resolved his differences with Contarini, and at the beginning of 1678 he arrived, alone, in Genoa. Nothing more is heard of Agnese Van Uffele. In Genoa he was immediately put in charge of the orchestra at the Teatro del Falcone and asked to prepare some of the female singers. A group of nobles agreed to pay him 100 Spanish doubloons a year and to provide him with a house, food, and a servant; in return, he had only to stay in Genoa. In quick succession he composed La forza dell’amor paterno (performed 15 times during the 1678–9 season), Le gare dell’amor eroico and the comic opera Il Trespolo tutore. At the same time he was teaching and composing other music, both sacred and secular. In 1680 he wrote the cantata morale Alle selve, agli studi, all'armi, to words by Benedetto Pamphili, and the sacred cantata Esule dalle sfere and some works were published in miscellaneous collections in England (1679) and Italy (1680). In 1681 Duke Francesco II d’Este in Modena requested an oratorio of him: La Susanna (to a libretto by the duke’s secretary, Giovanni Battista Giardini) was heard in the oratory of S Carlo in April. Another commission, this time for an opera, arrived from Duke Flavio Orsini in Rome, who asked Stradella to set his own libretto, Moro per amore. On 24 May the composer sent him the finished score, saying that he was composing a ‘cloak-and-dagger operetta’ for six characters to be done at a summer villa. He was also finishing a serenata to celebrate the wedding of Carlo Spinola and Paola Brignole: Il barcheggio, ‘a mixture of harmonious voices, poetry and instrumental music’, was performed in the bay of Genoa on 19 June.

Stradella’s life ended tragically at the age of 42 when an unknown assassin stabbed him to death for reasons which are still unclear. In a city of public puritanism and private crime, free access to the nobility, especially women, had already been complained of in anonymous letters, and it was said that the murder had been organized by a certain Giovanni Battista Lomellino, who became jealous when he realized that an actress who had been made pregnant and abandoned (supposedly by Abate Granvella), and whom he had aided, preferred Stradella to him. Whatever the reason, Stradella’s burial in S Maria delle Vigne, one of Genoa’s most aristocratic churches, and the careful attention paid to his mutilated body and to his soul (involving payment for 24 masses) are signs of respect accorded a gentleman. It should be noted that none of Stradella’s personal scandals had ever affected the demand for his music.

Stradella left no will, and his belongings were divided between his relatives. As early as 19 August 1682 his half-brother Francesco offered music to Francesco II d’Este; it is likely that the Stradella manuscripts catalogued Mus.F in the Biblioteca Estense, Modena (see illustration), came both from the composer himself (who, after La Susanna, continued to send music to the duke) and through his half-brother’s offer. In 1688 a Genoese nobleman, Giuseppe Maria Garibaldi, offered copies of Stradella’s music in exchange for copies of music already in the duke’s library; the manuscripts catalogued Mus.G in the Biblioteca Estense presumably came about in this manner. The dukes of Modena were probably responsible also for the Stradella pieces in the Österreichische Nationalbibliothek, Vienna, since Francesco V d’Este took to Vienna what he considered his family’s private collections. Stradella manuscripts owned by the Venetian bibliophile Jacopo Soranzo (1686–1761) eventually found their way to the Bodleian Library in Oxford and the Biblioteca Nazionale in Turin. The important Stradella autographs and other manuscripts in the Biblioteca Marciana, Venice, were probably left in the city by the composer or sent by him to Polo and Girolamo Michiel. Both Handel and Burney acquired Stradella manuscripts which are now in the British Library, London, and Christ Church, Oxford; other music acquired by Viscount Fitzwilliam is now in Cambridge. Many works in the Bibliothèque Nationale, Paris, were taken there from Italy by Napoleon as spoils of war. In short, although Stradella’s music is now to be found in 55 European and American libraries, the most important collections were formed in the 17th and 18th centuries.

These same centuries witnessed the continued performance of Stradella’s music, especially in Italy and England, but also the rise of the ‘Stradella legend’. The Histoire de la musique et de ses effets of Pierre Bourdelot and his nephew Pierre Bonnet-Bourdelot, published posthumously in 1715, included a seven-page biography of Stradella, the falsities of which were frequently repeated (by Burney and Hawkins among others) and further elaborated; it became the source for opera librettos set by Niedermeyer (1837), Flotow (1844), Franz Doppler, Adolph Schimon (1846), Giuseppe Sinico (1863) and Virgilio Marchi (1866), as well as for novels, songs, poems and plays. Remo Giazotto’s two volume Vita di Alessandro Stradella (Milan, 1962), although purporting to be based on actual documents, is yet another blatant fabrication of events. Even the aira ‘Pietà, Signore’ (also known as Aria di chiesa and Agnus Dei) is not by Stradella, although it bears his name on hundreds of copies and arrangements; it was possibly composed as a spoof by F.-J. Fétis, although it has also been attributed to Louis Niedermeyer..