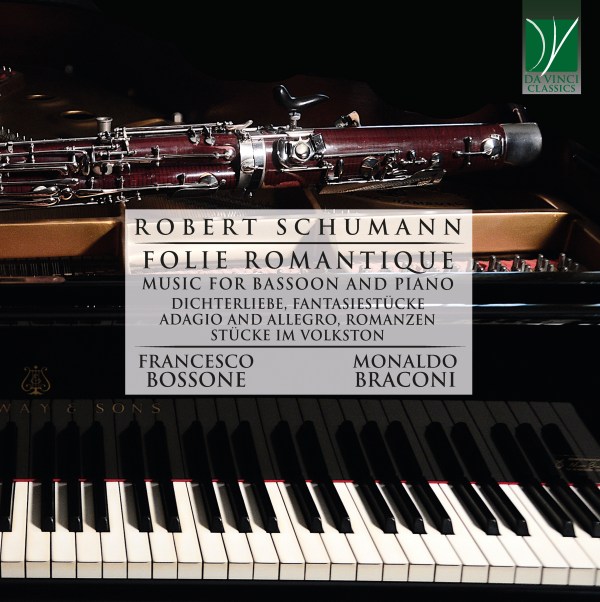 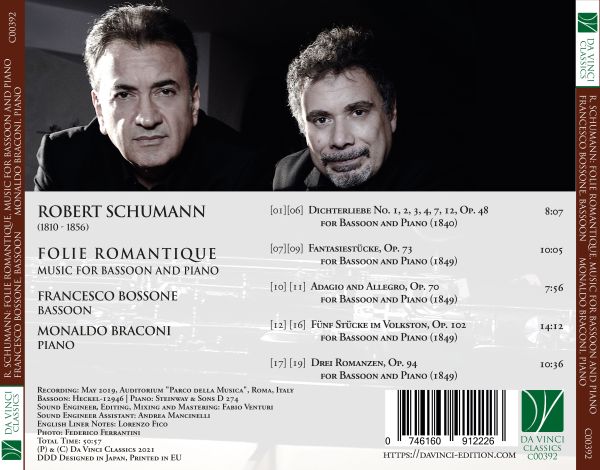 Francesco Bossone: Principal Bassoon of the Orchestra dell’Accademia Nazionale di Santa Cecilia since 1985, he has played in this role with Maestro Claudio Abbado in the Orchestra Mozart and in the Lucerna Festival Orchestra, with the Human Rights Orchestra, with the Orchestra da Camera di Mantova and the Orchestra Filarmonica della Scala. He was invited by the Mahler Chamber Orchestra and he has collaborated with Maestro Lorin Maazel and the Simphonica Toscanini in Italy and in several international tours. He is engaged in an intense program of concert in Italy and all over the world, both as a soloist and in very important chamber groups. In 1990 he took part in a concert at the Carnegie Hall organized by the New York Philarmonic Orchestra in memory of Leonard Bernstein. He was invited by Maestro Daniele Gatti to perform as First Bassoon with the Royal Philarmonic Orchestra in London. From 1996 to 1998 with the Royal Philarmonic Orchestra directed by Daniele Gatti, he took part in prestigious concerts and recordsing productions at the Royal Albert Hall, at the Barbican Center and at the BBC Proms in London. The Principals of the Royal Philarmonic Orchestra agreed unanimously with their permanent Director Daniele Gatti to appoint him First Bassoon Soloist. Among his numerous Solo performances: in February 2004 the Carl Maria von Weber Concerto in F major for Bassoon and Orchestra op. 75 in the 2003/2004 Symphonic Season of the Orchestra dell’Accademia Nazionale di Santa Cecilia directed by Myung Whun Chung and in September 2004 the W. A. Mozart Concerto for Bassoon and Orchestra K. 191 at the K Festival produced by the Accademia Nazionale di Santa Cecilia with the Orchestra directed by Thomas Netopil. He has a large repertoire for Principal Bassoon and Orchestra which includes Concertos of J. C. Bach, Boismortier, Danzi, Francais, Jolivet, Kozeluh, Hummel, W. A: Mozart, Muthel, Rossini, Rolla, Stamitz, Vivaldi, J. C. Vogel. C. M. von Weber. While teaching, he’s involved in numerous courses and masterclasses in Italy and abroad, among which, between 1997 and 2000 Woodwind Preparatory Courses for the Youth Orchestra of the Accademia Nazionale di Santa Cecilia. He teaches in the Annual Course of High Improvement of Bassoon at the Accademia di Santa Cecilia in Rome.

Monaldo Braconi: Professor at the piano faculty of “Alfredo Casella” State Conservatory in L’Aquila. Since 1998 he has been the associate pianist and maestro at Accademia Nazionale di Santa Cecilia in Rome. He is a pianist in the courses at the Accademia Musicale Chigiana in Siena and at the High Performing Arts courses of the Accademia Nazionale di Santa Cecilia with professors Massimo Paris, Giovanni Sollima and Alessandro Carbonare. Born in Rome, he studied pianoforte and chamber music at the Santa Cecilia Conservatorium of Rome. He graduated with full marks and Distinction. He specialized whit eminent soloist as Riccardo Brengola at the “CHIGIANA MUSICAL ACADEMY” in Siena, Oleg Malov at the “RIMSKIJ-KORSAKOV STATE CONSERVATORY” of Saint Petersburg,(Russia) Sergio Perticaroli at the “NATIONAL ACADEMY OF SANTA CECILIA” in Rome. He has also performed in France, Germany, China, Egypt, United States, Iran, Romania, Ucraina and Russia and has worked with significant foreign orchestras and he plays with important chamber ensembles like “i Percussionisti dell’Accademia Nazionale di S. Cecilia”, “PianoFortissimoPercussionEnsemble”, “i Cameristi del Conservatorio di S. Cecilia”, i “Solisti della Scala” ed il “Quartetto della Scala”. As a soloist, he has played, among other things, the "Grande Concerto per la Strage di Bologna", the concert in the "EUROPALIA" Festival in Brussels and the concert held at the Auditorium Pio in Rome where performed the concert for M. Ravel's left hand with the Ukrainian National Symphony Orchestra in Kiev. This last concert was broadcast by the Italian Television (RAI UNO) and Radio (RADIOTRE). Among the various recordings are the last ones: a CD for VDM Record entitled "Simply ... George!", dedicated to George Gershwin's works for piano and orchestra, a CD for Decca with the clarinetist Alessandro Carbonare and one for "Amadeus", with his brother Simonide Braconi, first viola of the Teatro "Alla Scala" Orchestra in Milan, dedicated to the opera by Johannes Brahms for viola and piano; a dvd titled "Playing Portraits" in violin trio - clarinet - piano ensemble, with Elisa Papandrea and Alessandro Carbonare, recorded at the Museum of Contemporary Art in Rome, on music from the twentieth century; The next cd will be dedicated to Robert Schumann, in duo with Francesco Bossone, first bassoon of the Orchestra of the National Academy of S. Cecilia.