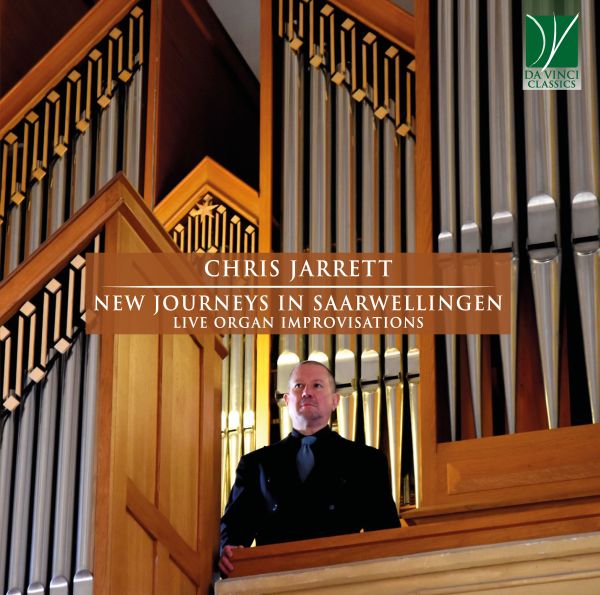 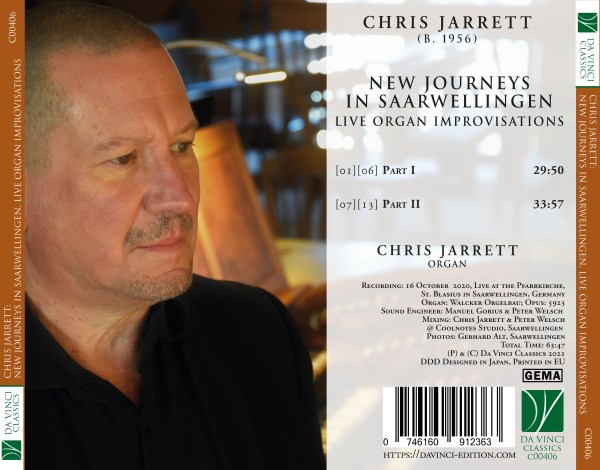 No more than several dozen people were allowed into the concert, and they were set in all corners of the St. Blasius church in Saarwellingen in order to keep adequate distance from one another. It was a bizarre thing to see from the the organ loft – the audience shuffling in without much ado and sitting themselves down on widely seperated church benches. A quiet desperation strongly spiced by hope could be felt within the walls of this very roomy neo-gothic church with an echo able to carry for about 8 seconds.

My organ improvisations, which I like to call “New Journeys,” are always reflections of our times, but also of the specific conditions under which they are performed. I have more trouble distancing myself from present and immediate conditions than I do describing them in music, and I do always take 2 or three days, not only to check the registration of the organ, but also to put out my antennas for the environment, the people and the room or church where the performance will take place. Saarwellingen is a small town in the Southwestern district of Germany called “Saarland.” The area is marked by its industrial history and especially by coal-mining. Saarwellingen specifically also has a history of dynamite production. Most of the mines and old factories have now been shut down and there has been a feeling of frustration, but also one of hope for a new horizon here: What will become of these small industrial towns? How can their future be secured and optimized? How can they move forward and keep their identity at the same time? Culture and music are certainly part of these new concepts, and traditionally this area has been open to new ideas and modern forms partially, of course, due to its background as a port of modern industry.

So, how are these improvisations conceived? One important thing is that I an wary of using any electronic means to alter any sounds these instruments can create on their own. It is important for the listener to know that absolutely no tricks or electronic enhancements have been used either on the organ itself by connecting digital sounds to the keyboard or by mixing something foreign into the recording during the mix. This organ was built by the Walcker company and finished in 1995, but relied substantially on the material already installed by Haerpfer and Erman in 1953 and the original by Gerhardt of 1903. It has typical qualities of a “Romantic” organ, BUT (and this is what appealed to me) also has a range of sounds which do not only slide slowly from one to the other, but find stark contrasts. I usually enjoy these contrasts in organs of the 18th century such as those I performed upon built by Silbermann (Freiberg), Stumm (Bendorf-Sayn, Simmern) or Schnitger (Ganderkesee), but have also been inspired by sounds of Romantic organs such as those in Graz, Austria (Heiliggeistkirche) or Neuwied (Marktkirche). The Saarwellingen instrument may be classed as a middle-large, above average church organ, but it is, for those who search more carefully, quite an outstanding machine. I was especially surprised about the balance it offered, without sacrificing the wonderful and voluminous resonace of the trombones in the pedals.
Mechanically, too, it is in great shape and has been only recently rennovated. I have the habit, when creating these “journeys,” to check the organ for 2 or three days, find the sounds I want, save them and make a list of them. Within each of these settings, I will usually just improvise freely, but in a fraction of these journeys I tend to re-take material I have used before if it seems appropriate on the specific instrument. Once in a while, (as in the last section of Part 2 here, where I arranged some music by the Finnish composer Jan Sibelius), I will also find something from the past which corresponds to the situation and the organ. So, widely, these are free improvisations within given sounds and patterns with a few adequate additions from my own repertoire plus, perhaps, a small section using another source.

This recording would never have taken place if it hadn’t been for the kind and spontaneous offer by Cornelia Rohe of the city of Saarwellingen. Peter Welsch, the recording engineer, also really put his heart into it, and this did make a difference. Thanks to all.
Album Notes by Chris Jarrett

…This music confronts the listener with open questions and contradictions concerning human existence: it‘s comforting, then frightening, familiar and strange, harmonic and dissonant; there are quick, bright passages set above long, dark fundamentals – the music is set into frames and never completely free and atonal or chaotic.
…The organist captures and awakens the audience and then lets them relax again, he inspires reflection and creates connotations. But most importantly, Jarrett resolves acoustic irritations in a „double“ manner: in that they are consumed by more consonant chords in the short run, but are still kept alive to paint the larger picture. One of the posters in the chancel of the church fits into this concept perfectly: it displayed the words „discover the secret!“ Of course, the secret is never given away, but remains alive and suspended. One can recognize it and learn to appreciate it. Jarrett‘s music is an experience which shows us that the riddling and the mysterious in life are not only harbingers of insecurity and fear but are also gifts of enrichment and beauty for those who dare to take on the challenge.
After (the break) there is a meditative stretch: a steady rhythm is widened and begins to take off while impressions of passing landscapes, both bright and dark, enter the scene. The calm, bowever, is soon broken, as if to make up for lost time.
At the end of every journey something new begins: a new risk must be taken and with it– within the flow of events – new involvements arise. This is existential philosophy clothed as sacred music. Suspense and adventure, irritation and orientation.
Perhaps, in the end, there were more comforting passages than insecure ones after all: a strong, self-chosen affirmation of life and ones self. The voluminous, orchestral closing section was affirmative, optimistic and positive: an „amen.“ Asked how he liked his own concert, Chris Jarrett only replied, „Ich bin ganz zufrieden“ – „I feel alright about it.“

Chris Jarrett: Born in Allentown, USA in 1956 and grew up in the mountains of Eastern Pennsylvania. He studied piano at the Oberlin Conservatory of Music and Indiana University, but was unable to finish his studies for financial reasons. At the same time, he was also less and less willing to do so, feeling very “caged-in” within these institutions. It was in the following several years of struggle, working odd jobs from shrimp-fishing in Texas to office work in New York City that he feels his real musicianship developed.
No wonder he has written so much music for the stage – including his opera “John Donne”, his film-music to the “Battleship Potemkin” or incidental music to “Romeo and Juliette.”
The human drama and it‘s immediate and present manifestations are what his music is about. Chris Jarrett has been living in Europe, touring as a solo pianist with his own compositions, with ensembles and duos or as an improvising organist for decades now. In jazz circles, he is often seen as a jazz musician, while musicians and critics of “serious contemporary music“ may categorize his compositions under the heading “classical.”
When asked how his music should be described, Chris Jarrett‘s stoic, habitual answer is: “Yes.”