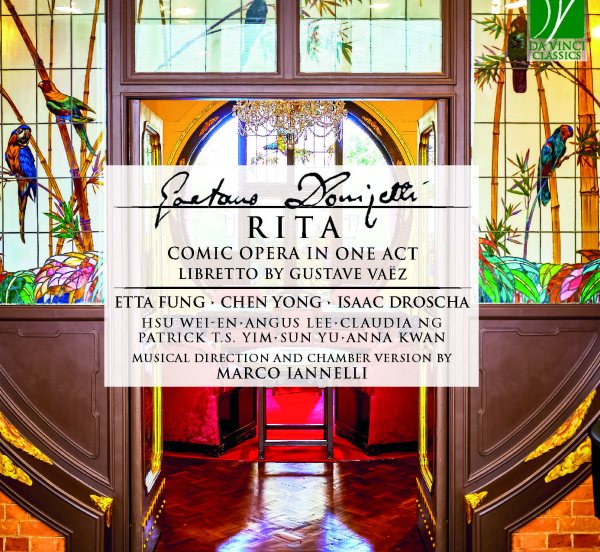 This CD was recorded live at the 23 November 2020 filming of the opera at Hong Kong’s iconic Haw Par Mansion. The resulting opera-film, a project of the Italian Cultural Institute, was broadcast in early 2021 on Hong Kong television (RTHK). Built in the 1930s by Aw Boon Haw, known as “The King of Tiger Balm”, as the family residence, the restored Haw Par Mansion is now a Hong Kong heritage building, gallery and museum and houses Haw Paw Music. In order to reset the work in Hong Kong — at the time of the mansion’s heyday — the dialogue was adapted slightly in the process of translation. But only slightly — quite a few Hong Kong husbands have set off for Canada over the years.
The three singers featured in this recording are some of the best-known in Hong Kong and regulars on Hong Kong stages. But also starring in this recording is a newly-arranged score for chamber ensemble by Marco Iannelli. The stage performance which preceded this recording by a week was the Hong Kong and, as far as we know, China premiere of this opera, and the world premiere of this new edition.

Hong Kong, 1930s: Rita is the proprietor of a small B&B; she also has two husbands. The first, Gasparo, died (she thinks) in a shipwreck en route to Canada. He had bullied her, something which — with her new freedom — she now takes out on her timid second husband Beppe. Beppe’s broken an antique cup and receives a shellacking.

Gasparo believes Rita to have perished in a fire. He’s come back for her death certificate so he can re-marry. For Beppe, the re-appearance of his predecessor, very much alive, is a chance to escape the tyrannical Rita. Gasparo sees Rita and tries to slip away but is caught by Beppe. The two men agree to play cards: the winner keeps Rita. Both cheat; the cards are discarded in favour of drawing straws: Beppe breaks a chopstick and pockets the short end, replacing it with another “long straw”. Gasparo loses and Beppe’s free of Rita.

Gasparo discovers that Rita saved a copy of the marriage certificate — the only proof that Gasparo is married — from the fire. He begs her for it, but in vain. Beppe’s on his way out when Gasparo feigns the loss of a hand in the shipwreck, winning Rita’s pity — and her copy of the marriage certificate, which Gasparo grabs: there’s nothing to keep him now. Rita’s lost both husbands. Beppe fights to prevent Gasparo from leaving and in the process realises that he loves Rita after all. And Gasparo is free to remarry in Canada.

Gaetano Donizetti: (b Bergamo, 6 Nov 1788; d Constantinople, 12 Feb 1856). Italian teacher and composer. He was the elder brother of Gaetano Donizetti, and studied the flute with an uncle. From 1806, after being turned away from the Lezioni Caritatevoli di Musica for being too old, he took lessons from Mayr. In 1809 he enrolled in the Italian army as a musician, and subsequently played in battalions on the island of Elba and in the Sardinian army. He was highly regarded as a bandmaster, and when Sultan Mahmud II asked for a musician to reorganize his imperial band, Donizetti’s name was put forward by the Italian ambassador in Constantinople. He arrived there in 1828, and was made General Instructor of Imperial Ottoman Music with a generous stipend of 8,000 francs a year.

Donizetti coached the players, acquired Italian instruments and taught Western notation. The band was immediately successful, and Donizetti took charge of the other army bands. Through his influence the first school of Western music in Turkey was opened in 1831. In addition to conducting band music on ceremonial occasions, and orchestral programmes at the court theatre (in the harem), he mounted productions of short Italian operas.

Donizetti’s importance lies above all in his work as a teacher and organizer. His compositions, mostly occasional pieces (marches and anthems) for Mahmud II and Abdul Medjid, rarely depart from a consciously conventional and celebratory style. Nevertheless, at least one of the imperial marches found some contemporary popularity: Liszt wrote a Grande paraphrase de la marche de Donizetti composée pour Sa majesté le sultan Abdoul-Medij-Khan (Berlin, 1848). He was made an honorary general in the Turkish army in recognition of his services, and in 1842 the French government made him a knight of the Légion d’Honneur.

Chen Yong: Well known by his excellent performances in operas and concerts. Since 2007 he made his operatic debut in the Shanghai Grand Theatre with the conductor Michel Plasson and the director Nadine Duffaut, Chen has performed over 30 operatic roles with major orchestras. Chen graduated from the Vocal department of Universität für Musik und Darstellender Kunst Wien in Austria as the first recipient of Vienna Opera Ball scholarship after obtaining a Master Degree in Performance also with full scholarship from the Hong Kong Academy for Performing Arts.

Etta Fung: Coloratura soprano Etta Fung is known for her “charm and verve” (Opera Today) and exceptional stage presence. She has enjoyed an international performing career in Germany, Italy, the United States, Canada, and Hong Kong. She received critical acclaim in the Hamburger Abendblatt for her European debut as Gretel (Hänsel und Gretel) at the Neue Eutiner Festspiele: “(Fung) acted with great enthusiasm, her powerful soprano voice underscoring the Wagnerian sounds of the score”.

Isaac Droscha: Isaac has performed roles with various regional companies in the United States, including the Des Moines Metro Opera, Michigan Opera Theater, Opera New Jersey, the Bayview Music Festival, and Arbor Opera Theater, as well as roles in Hong Kong with companies such as MusicaViva. His performances have received numerous positive reviews, especially lauded for his comedic timing. He is also a prolific concert performer of oratorio and art song. Isaac has also performed numerous recitals in the United States, Russia, and Hong Kong.

Marco Iannelli: Marco Iannelli is an Award-Winning Italian Composer and Musicologist, and his works are played all around the world: Milan, Rome (in Vatican City), Paris, Strasbourg, San Francisco (SFMOMA), Athens (at the Olympic Games), Hong Kong (Cultural Centre). As an all-round Composer, he designed soundtracks for films, theatres, advertising and promotional events. For years, his work has diverted also into contemporary dance music productions, and he collaborated with international renowned choreographers such as Gheorge Iancu, Brian Sanders, Daniel Ezralow and David Parsons. For his book “The Cassandra Case”, Iannelli was honoured by the acclaimed International Award “Luigi Illica” in September 2009. The Vittorio Gnecchi’s opera “Cassandra” restored by Iannelli, and forgotten for almost a century, is become an enormous international success, performed in Montpellier (France), Berlin (Germany), Tokyo (Japan), Catania (Italy) and New York (U.S.A.).