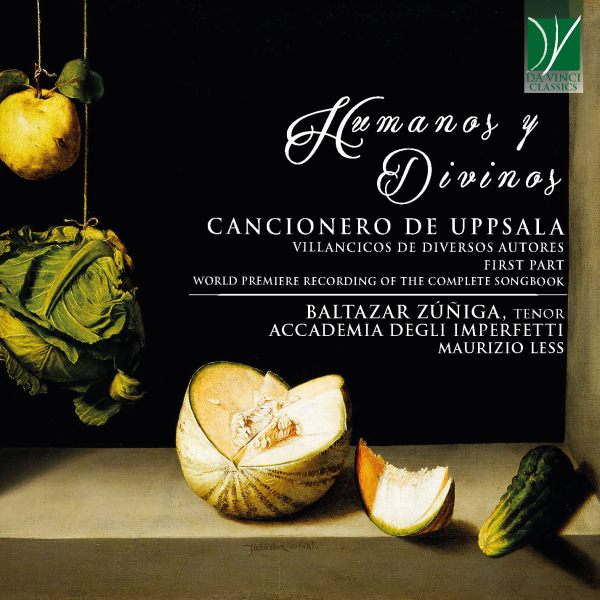 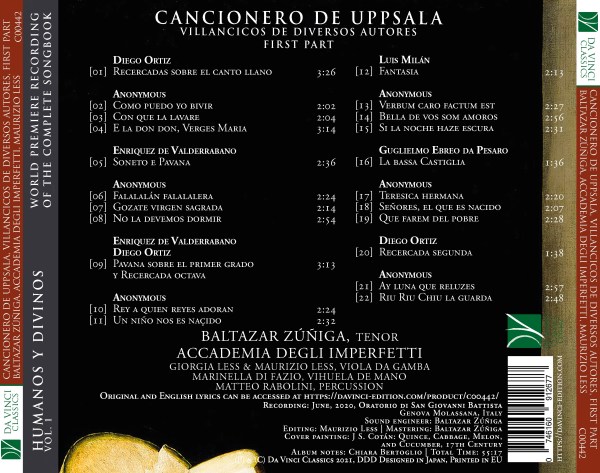 Accademia degli Imperfetti: The association Accademia degli Imperfetti has been giving performances and organising educational workshops and courses since 1996. Its productions are characterised by their detailed exploration into how music relates to particular locations and narratives. Sometimes working as artists in residence, their projects have been hosted by civic and state museums in Genoa and Pescara and also by numerous artistic and cultural festivals in Italy and elsewhere. These include: Festival dei Due Mondi in Spoleto, Festival of the Saracens in Pamparato, Echoes of Cagliari, Giovine Genovese Orchestra, Cusiano Early Music Festival, Salerno Early Music Festival, Antiqua in Piedmont, RomaFestivalBarocco, Los Conciertos del Cervantes in Rome, Foligno’s Segni Barocchi Festival, and the Signes Festival in France.
The association has also collaborated with the France-based contemporary dance company Silenda in producing the soundtracks for their performances ‘Vuota dismisura’ and ‘Courants..Ponts..Courants’. This was a co-production involving the Centre Choréographique National de Caen/Basse Normandie and the Ministère de la Culture et de la Communication. In December 2003 Accademia degli Imperfetti established a series of early music workshops and concerts ‘Il Canto della Memoria’ at the Museo delle Genti d’Abruzzo in Pescara. Since 2013 the association has been working on another project “Musica Antica a Palazzo”, organising concerts, seminars (with speakers including Pedro Estevan) and specialist workshops. One series of workshops, "PerCorsi di Musica Antica", is based in the educational department of the Palazzo Bianco Museum in Genoa, and has led to performances in some of the most significant of the city’s villas, palaces and convents.
Recent concert venues include Albergo dei Poveri and the Palazzo Ducale in Genoa. This Palazzo was the location for ‘Sound Frescoes’, a series of performances whose repertoire was designed to relate closely to the musical frescoes which decorate the walls of the Doge’s Chapel where the concerts were held.

Diego Ortiz: (b Toledo, c1510; d ?Naples, c1570). Spanish theorist and composer. He was at Naples by 10 December 1553, when he dedicated his Trattado de glosas to the Spanish nobleman Pedro de Urríes, Baron of Riesi (Sicily). This work appeared simultaneously in Spanish and in an Italian version full of hispanicisms suggesting that Ortiz served as his own translator. If so, he must already have spent an extended period in the part of Italy under Spanish rule.

By February 1558 Ortiz was maestro de capilla of the viceregal chapel maintained at Naples by Fernando Alvarez de Toledo, 3rd Duke of Alba and Spanish Viceroy from 1556 to 1558. In 1565 he was still maestro de capilla to the conservative Pedro Afán de Rivera, Duke of Alcalá, Alvarez de Toledo’s successor as Spanish Viceroy (1559–71) to whom he dedicated his Musices liber primus. A book of masses promised in the preface to this work never appeared.

The Trattado de glosas, or ‘treatise on the ornamentation of cadences and other types of passage in the music of viols’, is the first printed ornamentation manual for the player of bowed string instruments. It teaches neither how to improvise nor how to add ornamentation at sight, but provides numerous written-out ornaments fitting exactly prescribed time limits. The player is told in book 1 to inspect the dozen or more ornamented variants provided after each simple cadence or passage, to choose the most apt and to write it into his part at the appropriate place. The accidentals shown in the simple cadence are to be retained in whatever ornamented variant the player selects. The second book begins with four solo recercadas (studies) for bass viol, followed by six recercadas on the bass La spagna in which agile tenor-clef counterpoints for violón are accompanied by keyboard harmonizations of the theme. Next come four recercadas (ornamented versions) of Arcadelt’s four-voice madrigal O felici occhi miei for viol and keyboard, followed by four of Pierre Sandrin’s four-part chanson Douce mémoire. Book 2 concludes with eight recercadas for bass viol and keyboard over passamezzo basses. Neither book quotes any distinctively Iberian air. Ortiz’s preoccupation with bowed rather than plucked instruments contrasted with contemporary Spanish preference. The sole 16th-century peninsular manuscript that cites his ornamentation formulae is a Portuguese keyboard source (P-C Mus.242), not a Spanish viol source.

The hymns, psalms, Salves and alternatim Magnificat settings of Ortiz’s Musices liber primus, for four to seven voices, are without exception based on plainsong. Although one setting of Pange lingua gloriosi quotes a Spanish chant, few other native traits are evident in the collection. His use of accidentals (the same note may be unaltered in one verse and sharpened in the next) agrees with Infantas’s treatment of plainsong cantus firmi in Plura modulationum genera (1579). In his dedication Ortiz encouraged the Spanish predilection for accompanying sacred polyphony with instruments. In his preface he referred to Ockeghem, Josquin Des Prez and Mouton as the ‘true doctors of music’, a view in accord with the conservative style of his compositions, which show the distinctive influence of Morales.

A five-part funeral motet, Pereat dies (ed. H. Eslava in Lira sacro-hispana, Madrid, 1869), is not in the book of 1565 and may be by another Ortiz, like the three long six-part motets of I-Rvat C.S.24, copied in 1545. Vicente Lusitano, the probable author of an anonymous treatise (ed. in Collet), mentioned a Missa ‘L’homme armé’ by ‘Ortiz’. Two intabulations in Valderrábano’s Silva de sirenas(1547) are ascribed in that collection not to Diego but to Miguel Ortiz.

Luis Milán (b c1500; d after 1560). Spanish musician and writer. He is best known as the author of the first printed vihuela music, the Libro de musica de vihuela de mano intitulado El maestro (Valencia, 1536/R1975; ed. R. Chiesa, Milan, 1965, and C. Jacobs, University Park, PA, 1971). Along with his earlier booklet, Libro de motes de damas y cavalleros, intitulado El juego de mandar (Valencia, 1535), it was composed during his residence at the Valencian court of Germaine de Foix, where he remained until at least 1538. Nothing of Milán's earlier life is known, although it is possible that he was the nobleman of the same name mentioned in Valencian documents in 1516. His last book, El cortesano (Valencia, 1561), clearly inspired by Castiglione, offers valuable insight into life at the Valencian court and Milán's own musical practice. With an air of self-assurance and conceit, Milán refers to himself in El maestro as a second Orpheus. Testimony to his musical ability is found in poems published in the 1560s by Juan Fernández and Gil Polo.

El maestro is the earliest Spanish collection of independent solo instrumental music and accompanied songs, and is the first printed Spanish tablature. It is also the earliest known music to provide verbal tempo indications. In most cases, a single tempo prevails throughout each piece, expressed in terms such as ‘algo apriessa’ (somewhat fast), ‘compás a espacio’ (a slow measure) or ‘con el compás batido’ (with an agitated beat). For works in the ‘gallant style’ (de tañer de gala), which alternate passages of chords and diminutions, he advocated a more flexible tempo in which ‘all that is chordal is to be played slowly and the diminutions fast, pausing briefly at each fermata’. El maestro is unique among Spanish tablatures in being notated in a similar way to Neapolitan tablatures with the highest line of the staff indicating the highest-pitched course.

The prefatory texts of El maestro, as well as its title ‘the teacher’, advertise that it was designed with a didactic purpose, with the pieces arranged in increasing difficulty following ‘the same manner that a teacher would do with a student who had never played’. Even the easiest pieces, however, call for considerable instrumental dexterity. The book instructs in the reading of tablature, selection of strings and the tuning of the vihuela. It also includes an explanation of the modes that specifies the superius rather than the tenor as the voice by which mode is determined. The book is further arranged symmetrically in two parallel libros, each of which is formed by a combined cycle of genres, modes, and styles: fantasias (modes 1–4), idiomatic works (modes 1–8), fantasias (modes 5–8), pavans (modes 1–8; only in bk 1), Spanish and Portuguese villancicos, romances, Italian sonnets. Despite its novelties, El maestro is also a unique link with past generations of instrumental improvisors. The style of Milán's music sets itself apart form the work of all later Spanish instrumental music and, according to the author's own testimony, it is the work of a self-taught musician, an improviser who composed directly on the vihuela, later committing his works to notation.

The largest group of pieces in El maestro is the 40 fantasias, designated as such by Milán because they ‘proceed from the imagination and industry of their author’. As the first known examples of their genre in Spain they display a high level of sophistication and stylistic maturity. They are composed of multiple independent episodes that achieve coherence through their narrative continuity. They are based on a simple rhetorical model and unified by strong adherence to the modes. Thematic material is derived from the composer's reservoir of improvisatory formulae, many of which recur almost identically in different works. These range from occasional passages of strict imitation to others based on idiomatic devices, chiefly passage work or occasionally arpeggios. Milán's textures usually evoke an imitative style, but they are most frequently crafted as pseudo-imitation, built from short, accompanied melodic units that are reiterated at different pitches or in sequences to create the illusion of an imitative texture. The fantasias follow a characteristic tripartite scheme, beginning with an extended episode based on imitation or a combination of polyphonic and idiomatic devices, and continuing with a series of shorter episodes. The final episode is nearly always repeated as a signal of approaching conclusion, and a brief coda is frequently added. This style and structure also applies to the tentos in the gallant style. Also designated as fantasias, because they are original works, the six pavanas are similarly composed, within the confines of the dance rhythm. Two of these are based on Italian melodies, and the final one, in triple metre, is given as a galliard in at least one other contemporary source.

Milán's songs are notated with the sung melody shown in the tablature in red. This is a clear indication that the vihuelist would normally also have been the singer; the pitch register of the sung part is often quite high. Milán described himself as singing to his own accompaniment on a number of occasions in El cortesano. The Spanish and Portuguese villancicos are settings of popular love poetry and follow the formal pattern ABBA. Two versions are provided for 10 of the 12 of them, simple homophonic settings in which the singer embellishes with ‘quiebros’ (trills) and ‘glosas’ (diminutions), and alternative versions where the vocal part is to be sung unadorned while the vihuela part is written with added rapid dimiutions. The romances also have embellished accompaniments. Three of them deal with frontier themes of the reconquest, while one is based on the siege of Troy. All the Italian sonnets are through-composed settings. In one of them, Madonna per voi ardo, Milán suggests that the diminutions may be omitted from the accompaniment. The only sonnet by a known poet, O gelosi d'amanti by Sannazaro, was also set as a vihuela song by Mudarra.