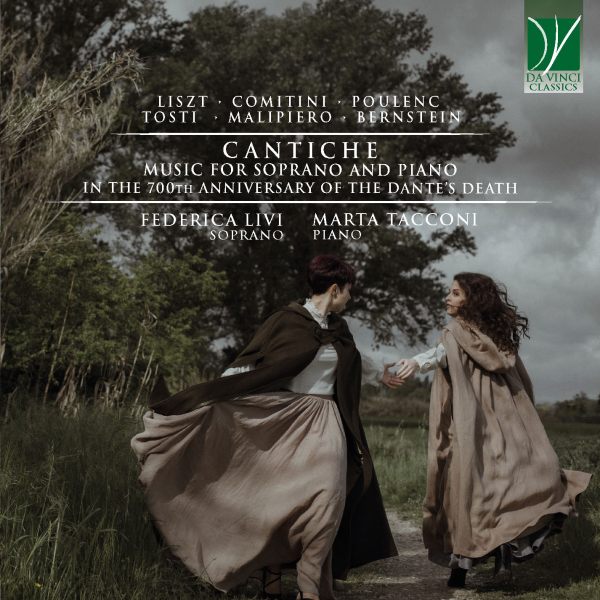 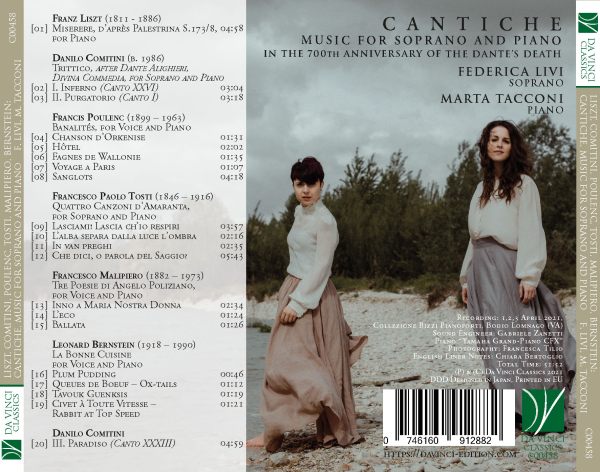 Federica Livi: The Italian Soprano Federica Livi graduated from the Conservatory G. Rossini of Pesaro in 2012 with the highest marks where she studied under the esteemed Maestri, L. Macchinizzi, R. Marcantoni and E. Dundekova; currently studying under the Maestri Alessandra Rossi e Bruno De Simone.
She continued her professional studies at the Bottega Peter Magg where she participated in their Opera Studio of Le Nozze di Figaro under the direction of Maestro Donato Renzetti and under the guidance of Maestro R. Barker, Alfonso Antoniozzi and Mariella Devia. She also completed a post graduate course at the Accademia del Belcanto Rodolfo Celletti where she studied under world famous maestri including, Richard Bonynge, Fabio Luisi and the soprano S. Bonfadelli.
She has won awards at the 70th edition of the European Competition for Young Opera Singers of Spoleto, at the 68th Edition of the AsLiCo Awards, at the 9th edition of the International Singing Competition of Pesaro and was chosen to receive the Roberto Scandiuzzi Scholarship at the XLIV edition of the “Toti Dal Monte” Awards.
Throughout her career she has debued in the following roles: Soprano in L’amor che move il sole e l’altre stelle, by A. Guarnieri and performed at the ‘Ravenna Festival’, “Nannetta” in Falstaff by Verdi, “Oscar” in Un ballo in maschera by Verdi, “Una modista” in Il cappello di paglia di Firenze by N. Rota, “Barbarina” in Le Nozze di Figaro by Mozart, “Berta” in Il Barbiere di Siviglia in G. Rossini, “Doralice” in Il trionfo dell’onore by A. Scarlatti, “Une famme” in La voix Humaine by Poulenc, soprano in Ehi Giò – Vivere e sentire del grande Rossini by V. Montalti, “Euridice” in Orfeo vedovo by A. Savinio, “Amante 2” in Fammi udire la tua voce by A. Guarnieri, “La Fisica” in Ettore Majorana – cronaca di infinite scomparse by R. Vetrano, “Zerlina” in Don Giovanni by Mozart, “Gilda” in Rigoletto by Verdi, “Gilda” in Opera Crime written by E. Melozzi, “Rita” in Rita by Donizetti.
Her concert and oratorio roles include, Faurè’s Requiem, Pergolesi’s Stabat Mater, Boccherini’s Stabat Mater, Vivaldi’s Gloria, Carmina Burana by C. Orff, Mahler’s 4th Symphony, Exultate Jubilate by Mozart. She has performed in numerous Italian Theatres and prestigious festivals.

Marta Tacconi: Born in Jesi, Italy, began to study piano at the age of six. In 2009, under the guidance of Bruno Bizzarri, obtained a First Level Degree in Pianoforte from the “G.Rossini” Conservatory of Pesaro with the most votes, and in 2016 a Second Level Degree as Accompanist Pianist and Repetiteur from the "Santa Cecilia" Conservatory in Rome, with distinction. From 2006 to 2009, perfected her piano studies, chamber music and vocal chamber music under the guidance of Lorenzo Di Bella, Guido Salvetti, Stelia Doz, and Pier Narciso Masi. From her earliest youth, played in many concerts, in important Italian Theatres and Auditoriums and qualified in various National Piano and Chamber Music Competitions in Italy. In 2010, selected by the "Sipario" Project of the “Pergolesi Spontini” Foundation in Jesi as House and Stage Manager, which gave her authorized professional status. In the same year, began to collaborate with the Pergolesi Spontini Festival and with the Traditional Opera Season of the “Pergolesi” Theater in Jesi. As of 2011, is, also, House and Stage Manager at the Rossini Opera Festival in Pesaro. In April 2017, after research and analysis carried out with support of Guido Zaccagnini, writes La voix humaine – From the monologue of Jean Cocteau to the music of Francis Poulenc, published by Edizioni Pendragon, Bologna (Italy). In the same year, founds, in Jesi, Studio Musicale Crescendo, to make classical music better known through concerts, theatre productions and other initiatives, as well as to take advantage of many years of experience in musical education and as a teacher of pianoforte. Currently, Marta Tacconi is Accompanist Pianist at the "F. Morlacchi" Conservatory in Perugia.

Danilo Comitini: He was born in the United Kingdom in 1986. He has studied in Italy with Alessandro Solbiati (Giuseppe Verdi Conservatory, Milan) and Ivan Fedele (Accademia di Santa Cecilia, Rome). His opera The spectacles, based on a novel by E. A. Poe, was staged at the Teatro Rossini of Pesaro in 2017.
He is winner of numerous international competitions and, as a result, he has performed in music Seasons, contemporary and non, both in Italy and abroad. In his own music, he searches for a message beyond sound. His compositions are polyhedral works which seek a perceptive interest in sound, gesture, form and
in a narrative aspect that gives music a means to describe an inner transformation. Beethoven himself, starting from the Fifth (but maybe even before), gives life to a concept of music loaded with a meaning "beyond" itself and carries a message. For Comitini, this is perhaps the most stimulating aspect of the narrative side of music, which is not necessarily telling a story or referring to something extra-musical. That is the most belittling aspect of music because it gives a value wich is not absolute. It is by "entrusting" music with a message and by letting it carry us from one vision (about the world and life) to another, as extremes of a dramaturgical vector, that music can achieve its best results. Thus, each piece is a new journey full of discoveries. According to the composer, this is one of the possible ways to write (but also to listen to) music. Especially in the artistic field, history has taught us that it is not the choice of one ideology or another, or this or that style, that can lead us to beauty. Even the most different ideologies are different ways of telling more or less the same concepts and the same emotions inherent in humankind. Comitini is not often interested in a kind of art that avoids expressing the human being, who is life: birth, growth and change, death. A path forward, therefore, which for the composer's way of "feeling" can be deeply expressed by the dramaturgical force of music, a direction in which the audience can also recognize and orient themselves.

Francesco Paolo Tosti: (b Ortano sul Mare, 9 April 1846; d Rome, 2 Dec 1916). Italian song composer and singing teacher. He entered the Naples Conservatory in 1858, studying the violin under Pinto and composition under Conti and Mercadante. In 1869, illness and overwork as maestrino at the college enforced a period of convalescence in Ortano. There he wrote Non m’ama più and Lamento d’amore, songs which subsequently became popular but which he initially found difficult to publish. Sgambati helped Tosti establish himself in Rome (where his admirers included D’Annunzio) by composing a ballad for a concert at the Sala Dante which Tosti himself sang in addition to his own works. Princess Margherita of Savoy (later Queen of Italy) was present and immediately appointed him her singing teacher and shortly thereafter curator of the court music archives. Tosti first visited London in 1875, and then made annual spring visits until he settled there in 1880. In the same year he was appointed singing teacher to the royal family, and from 1894 he was professor of singing at the RAM. He became a British subject in 1906, was knighted in 1908, and retired to Italy in 1912.

The songs Forever, Goodbye, Mother, At Vespers, Amore, Aprile, Vorrei morire and That Day were among his earliest successes in England. He was a prolific composer to Italian, French and English texts, with a graceful, fluent melodic style that quickly found favour among singers of drawing-room songs and ballads; the ballad ‘alla Tosti’ also found many imitators. His Vocal Albums, the 15 duets Canti popolari abruzzesi, and later songs such as Mattinata and Serenata all enjoyed great success.

Francis Poulenc: (b Paris, 7 Jan 1899; d Paris, 30 Jan 1963). French composer and pianist. During the first half of his career the simplicity and directness of his writing led many critics away from thinking of him as a serious composer. Gradually, since World War II, it has become clear that the absence from his music of linguistic complexity in no way argues a corresponding absence of feeling or technique; and that while, in the field of French religious music, he disputes supremacy with Messiaen, in that of the mélodie he is the most distinguished composer since the death of Fauré.